Beautiful Middle Farm is a farmhouse in the town of Effingham, Surrey dating back to 1280 where many historic features are still visible. Flanked by Upper Farm and Lower Farm a few miles away on either side, Middle Farm started off as a traditional medieval English hall with a giant fireplace in the middle (and open roof) with animals on one side, humans on the other. 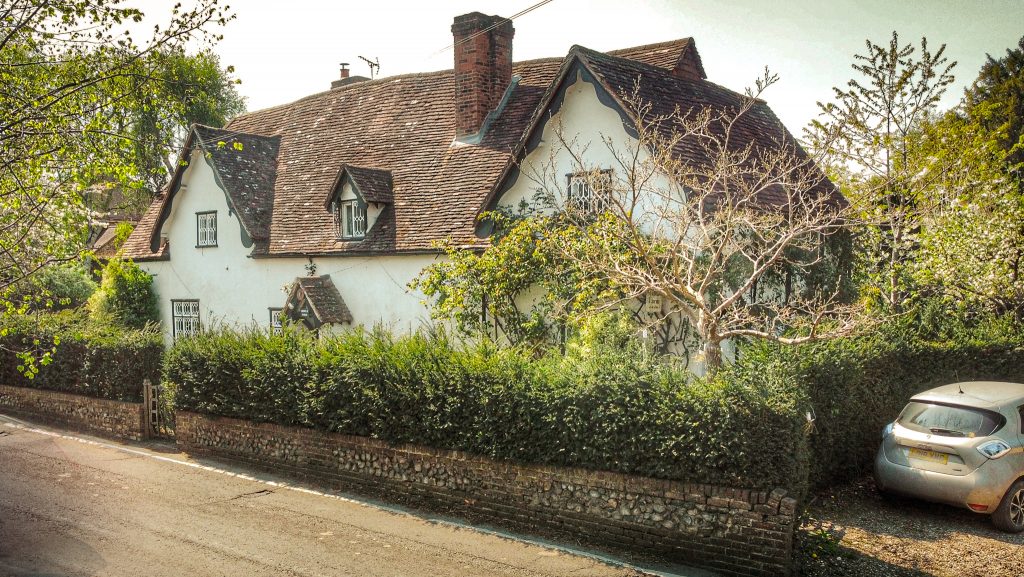 The current owners believe this farmhouse was part of a dairy farm, but they don’t know for sure. Over the centuries, the town of Effingham grew up around the farms. The house sits just off the road surrounded by a beautiful stone and brick wall. I love the quintessential British privacy hedge behind the wall. 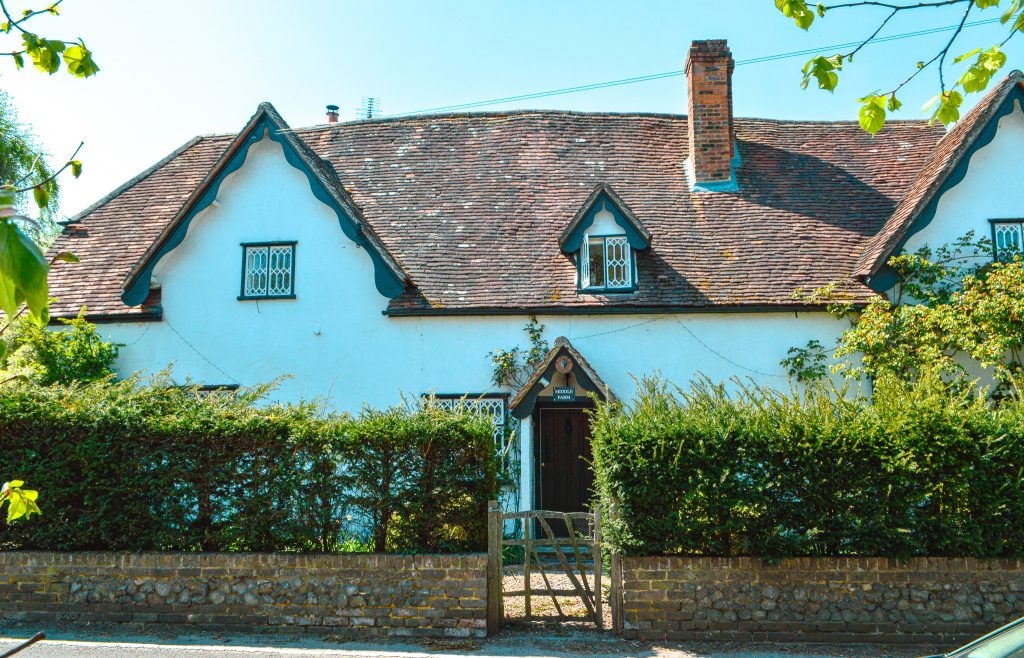 This house is known as a “Grade 2” listing in the United Kingdom. That means it is “of special architectural or historic interest considered to be of national importance and therefore worth protecting.” Notice the plaque above the front door that says “Building of Special Interest.” These properties are subject to regulations that protect their unique character. (I believe it’s similar to the American system of “National Register of Historic Places.“) 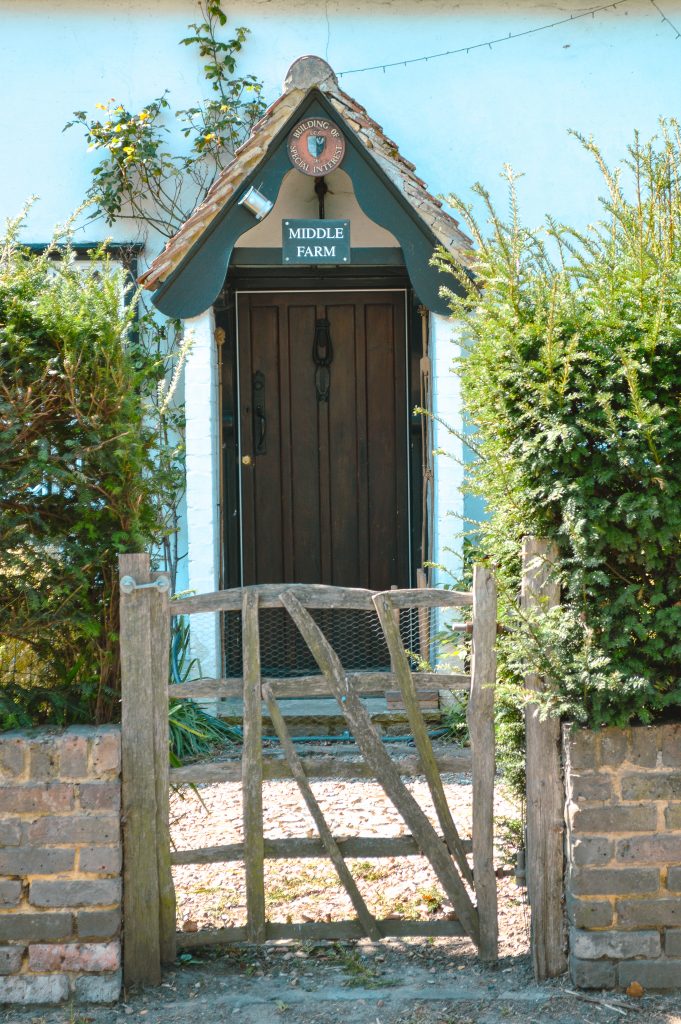 Upon entering through the front door, the first thing you’ll notice is the woodwork. These beams are absolutely gorgeous. As the house has settled and shifted over the centuries, what were once probably pretty straight wood beams have become slanted and sloped. The overall effect is utterly charming. 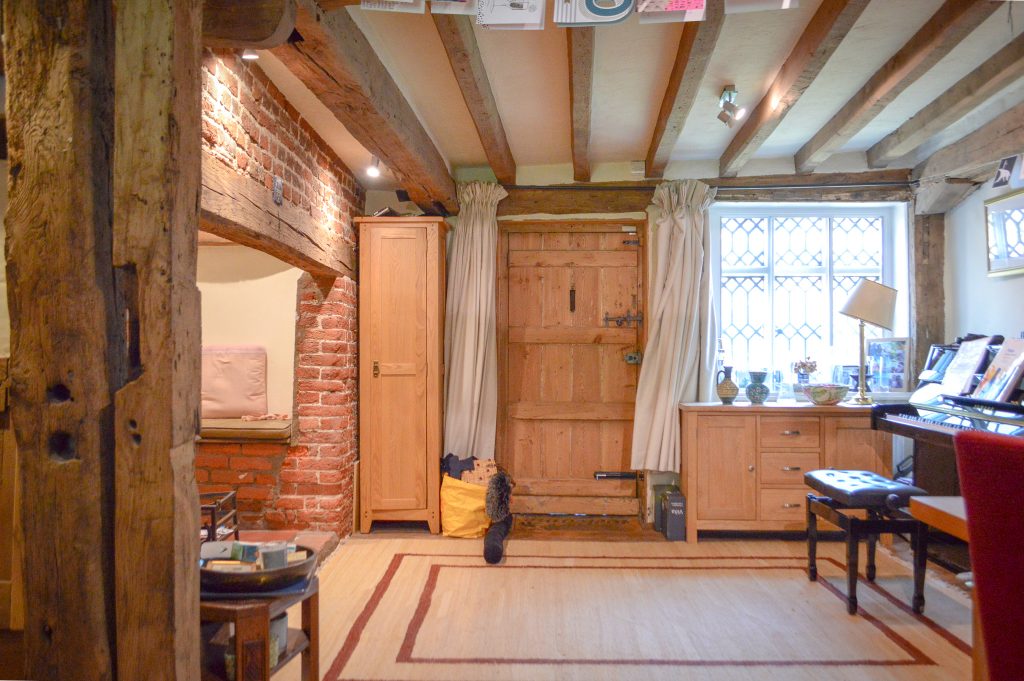 Just to the side of the front door is a breathtaking inglenook fireplace. These fireplaces are a sure sign of a historic build! Here’s a good description of them I found online:

An Inglenook Fireplace is also known as a ‘chimney corner’; it is the name for the large space found either side of very large and open fireplaces. Inglenook fireplaces can often be seen in very old pubs, the seats were formed for people to sit in warmth while they relaxed, shared conversations and enjoyed drinking among friends.

The word inglenook actually comes from Old English with ‘ingle’ meaning fireplace and ‘nook’ meaning an area. Nowadays the term ‘inglenook fireplace’ is commonly used by the fireplace industry to describe the area that is left within a chimney breast, once the chimney breast has been opened to its maximum width. 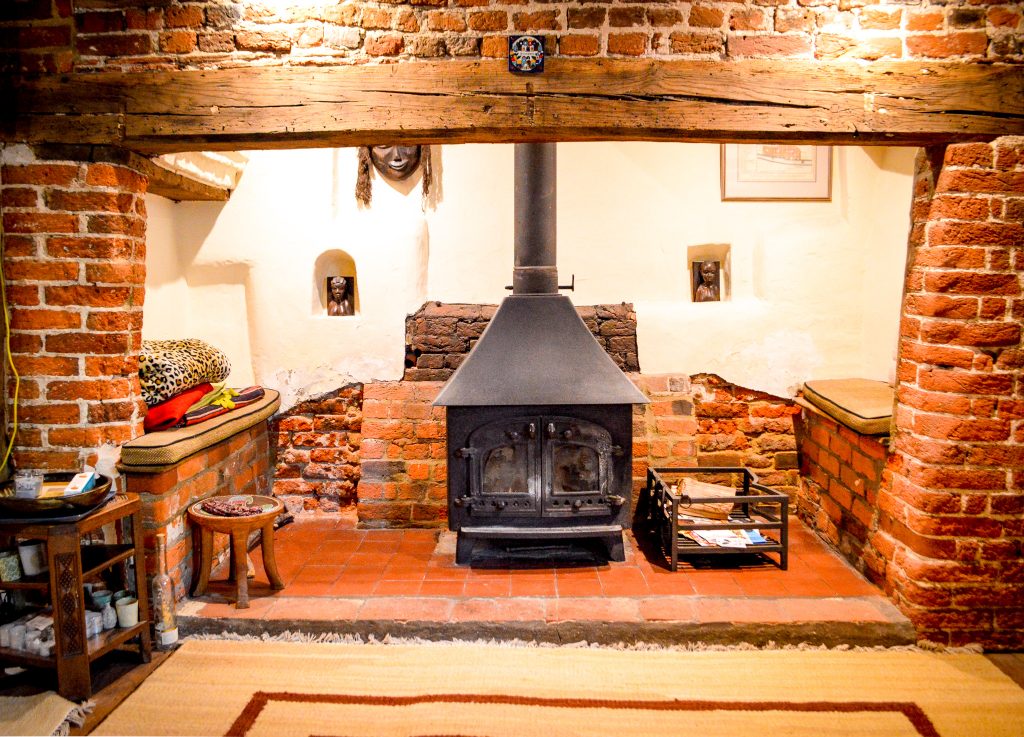 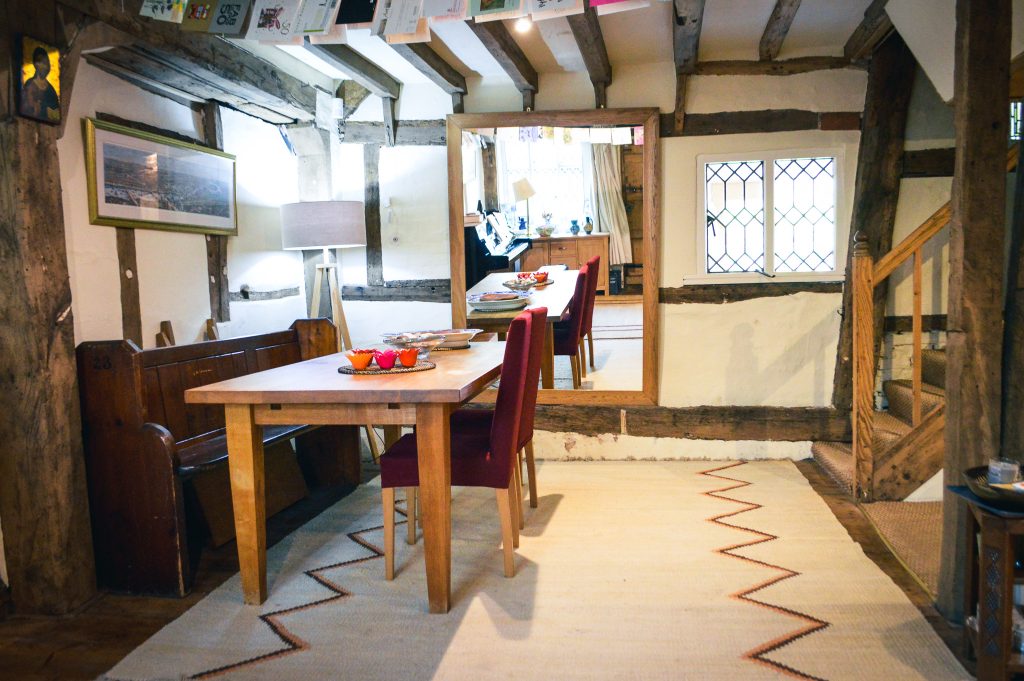 A doorway leads to a side portion of the house. In the seventeenth century, as often happens with larger British homes, whoever owned the house decided to split it up into three cottages. This side area would have been one of the cottages. The house was reunified in the twentieth century. 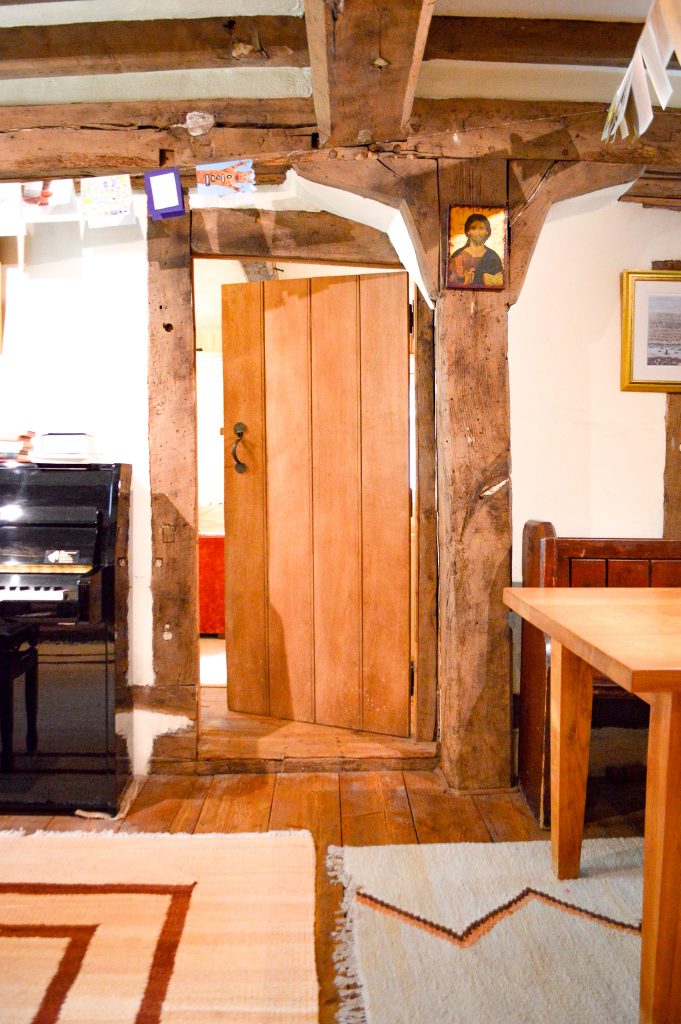 Be sure to note the gorgeous floor beams. Of course the 1280 structure wouldn’t have had these but they were added in at some point years and years ago, and they’re just stunning. (And not straight! I love it.) 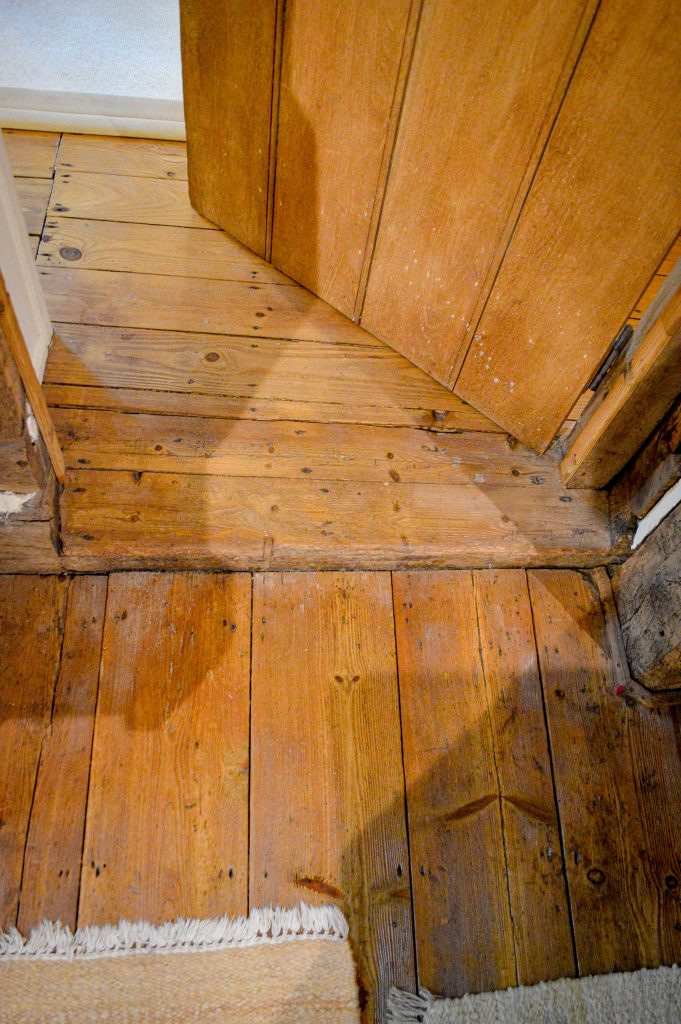 This warm cozy living room to the side has only one beam across the ceiling, which is made of a yew tree. (The rest of the house’s beams are comprised of traditional oak.) Using yew for just one beam in the house is unusual. The current owners don’t know why someone chose yew for this one beam. 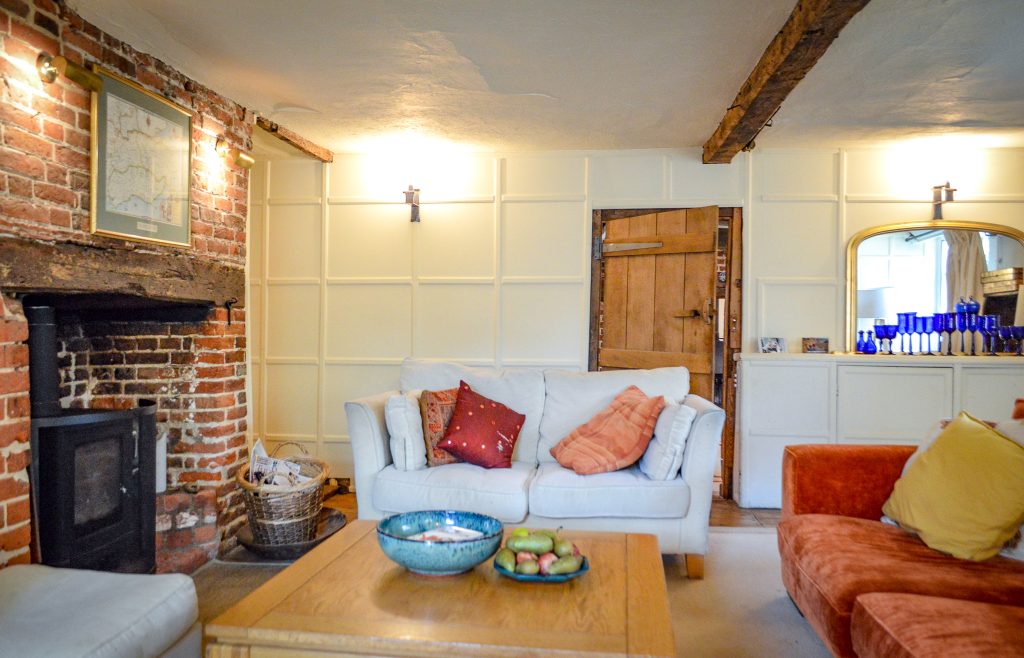 In the back of a room is a lovely staircase. 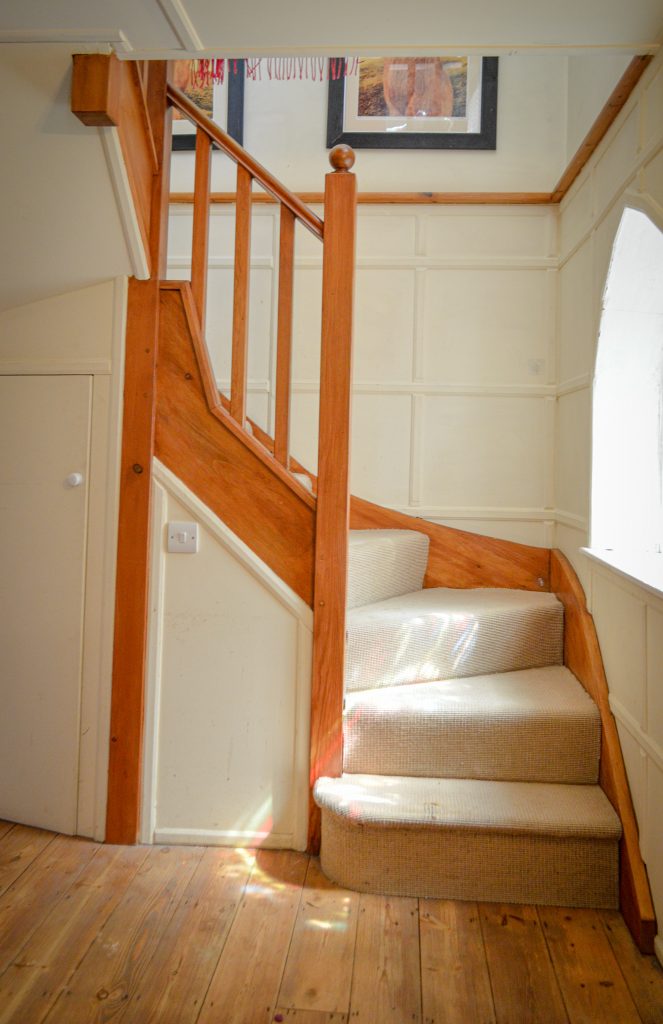 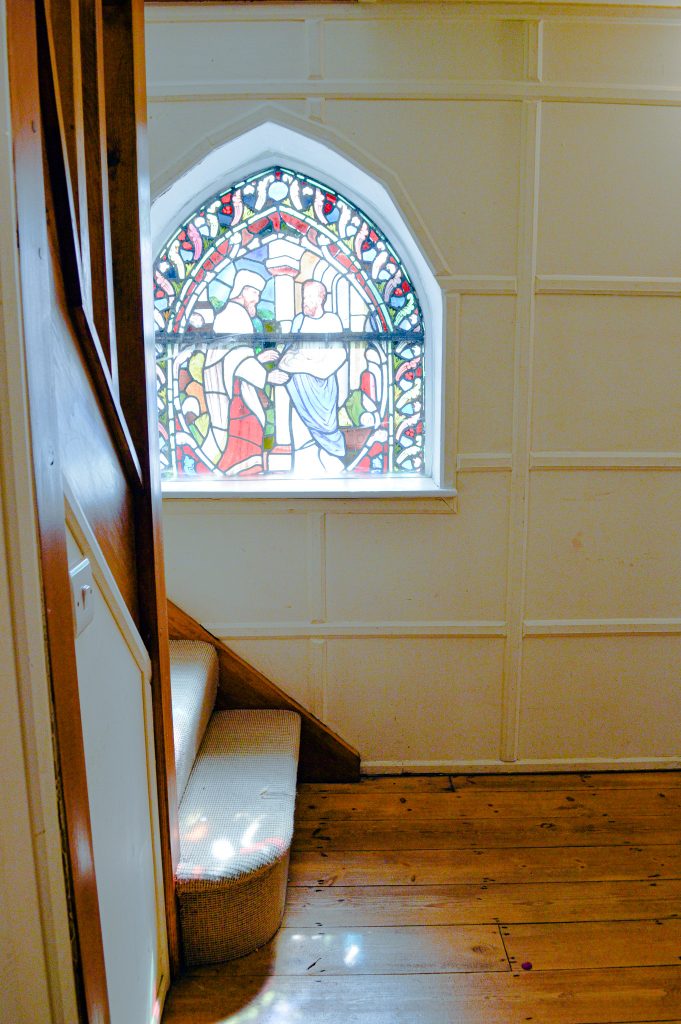 Heading toward the kitchen are a few gorgeous architectural elements worth showcasing: first, these gorgeous panels on the wall. The owners (who purchased this home in 2016) don’t know the history behind them. They look medieval to my very untrained American eye! 🙂 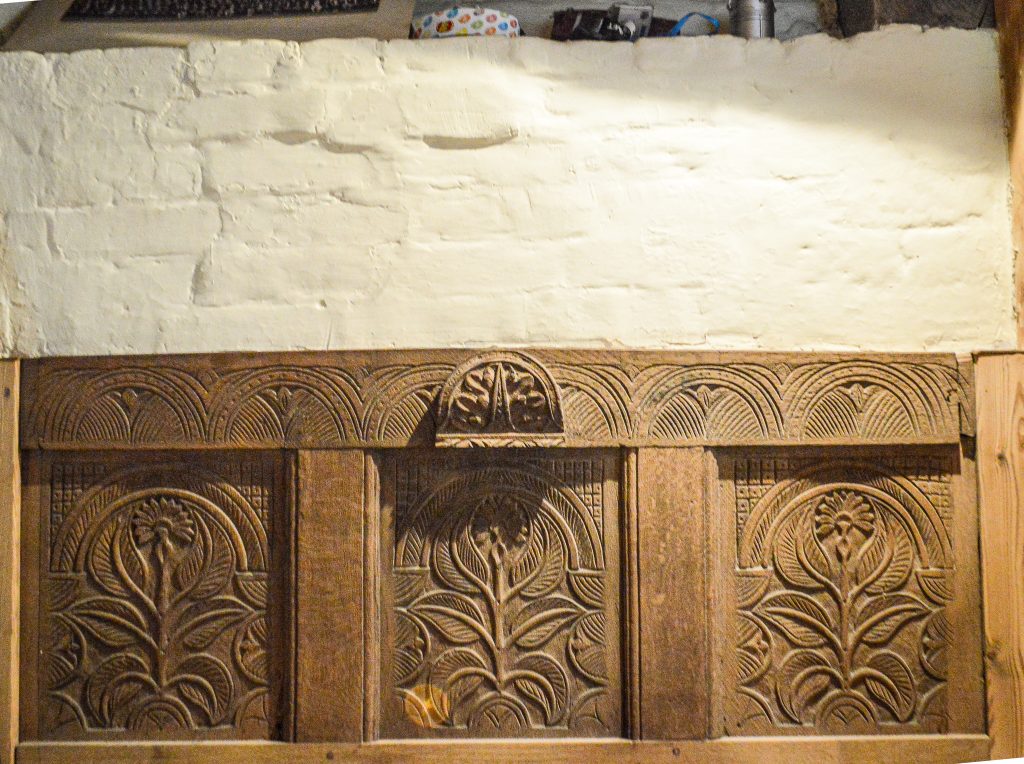 Second, another stained glass window is on the wall going toward the kitchen: 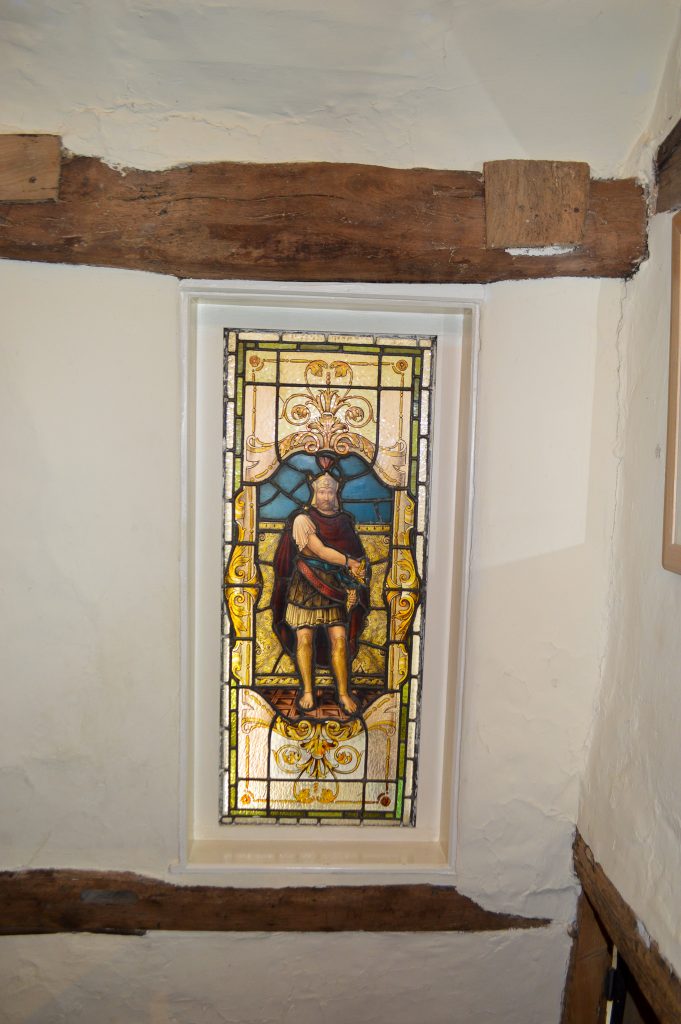 Kitchen Addition in the Back

The kitchen was added on at some point. (You can see the back of the stained glass window above in this kitchen photo below.) 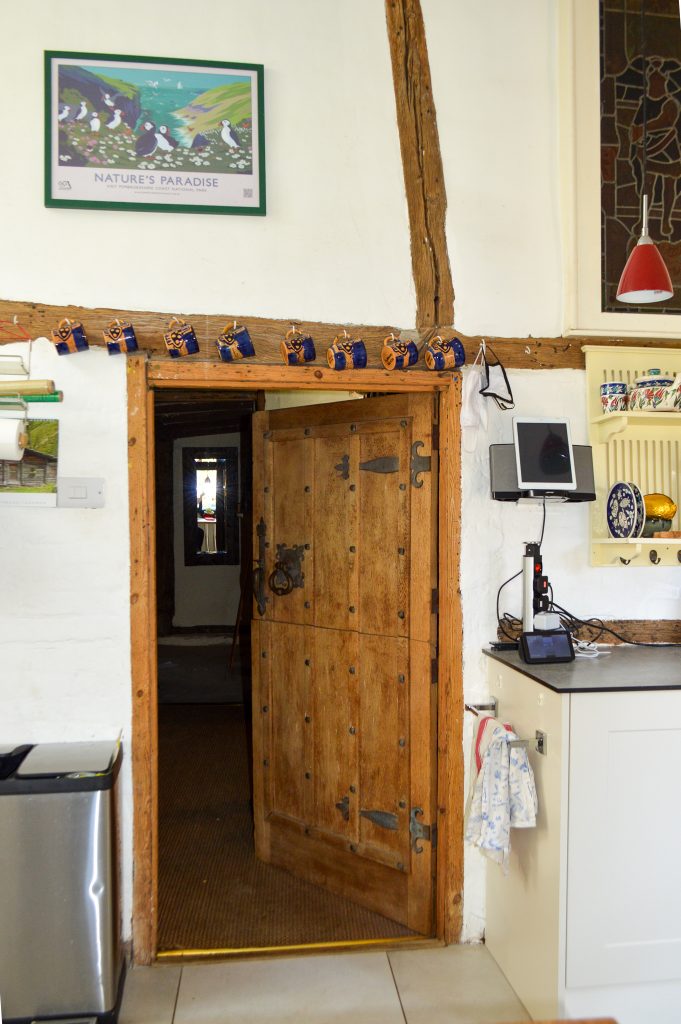 I swooned over the hardware of the kitchen door. Ohhh if walls (or doors) could talk! 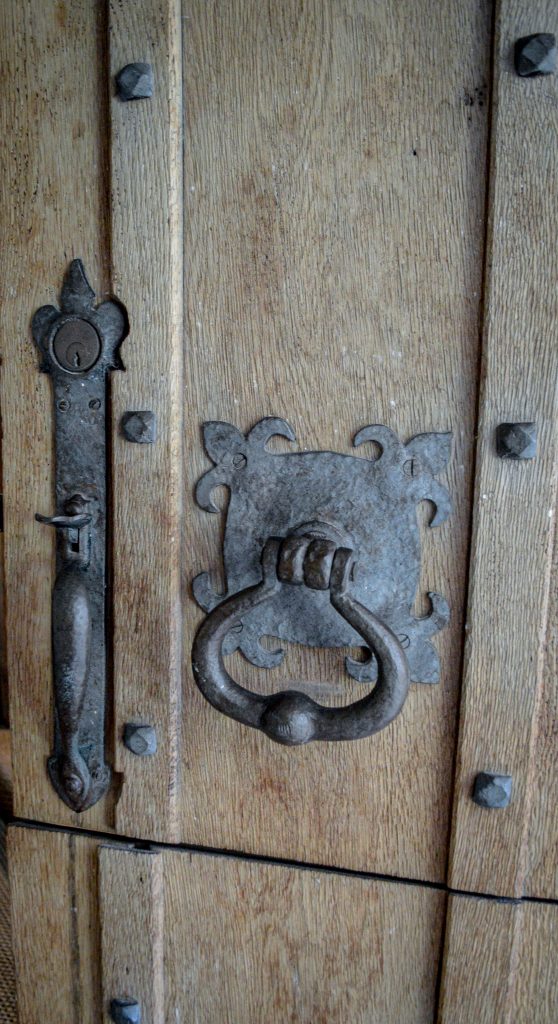 The kitchen is modern and bright, which should feel odd as part of this medieval structure, but it honestly feels seamless. 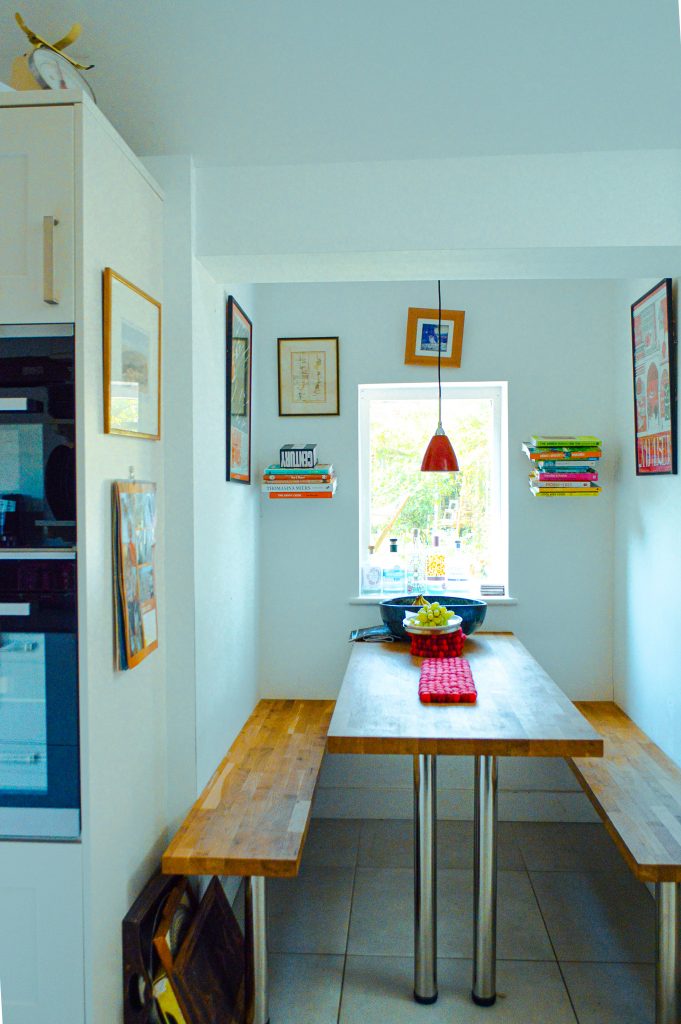 Below you can see the former exterior wall that is now one of the interior kitchen walls. 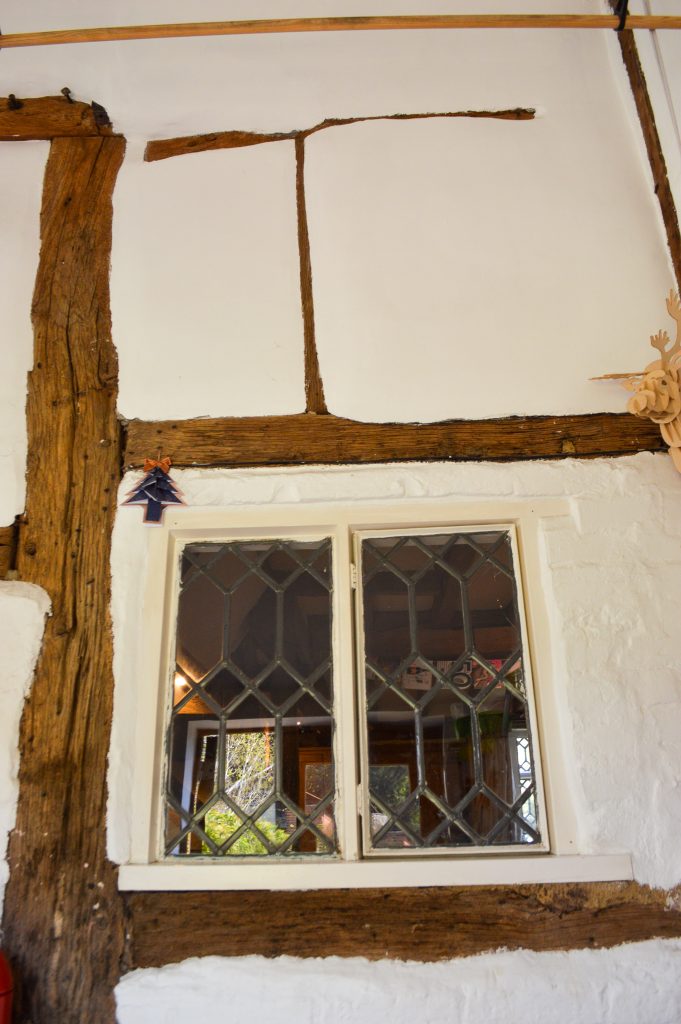 The kitchen opens out to a fabulous backyard (or as the Brits say, garden). 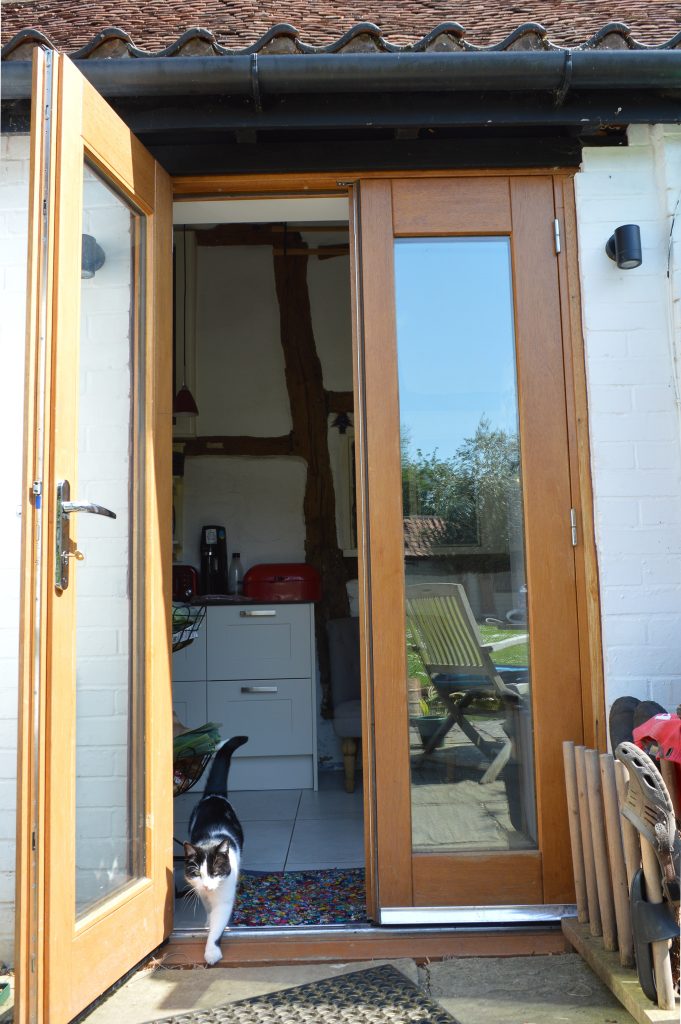 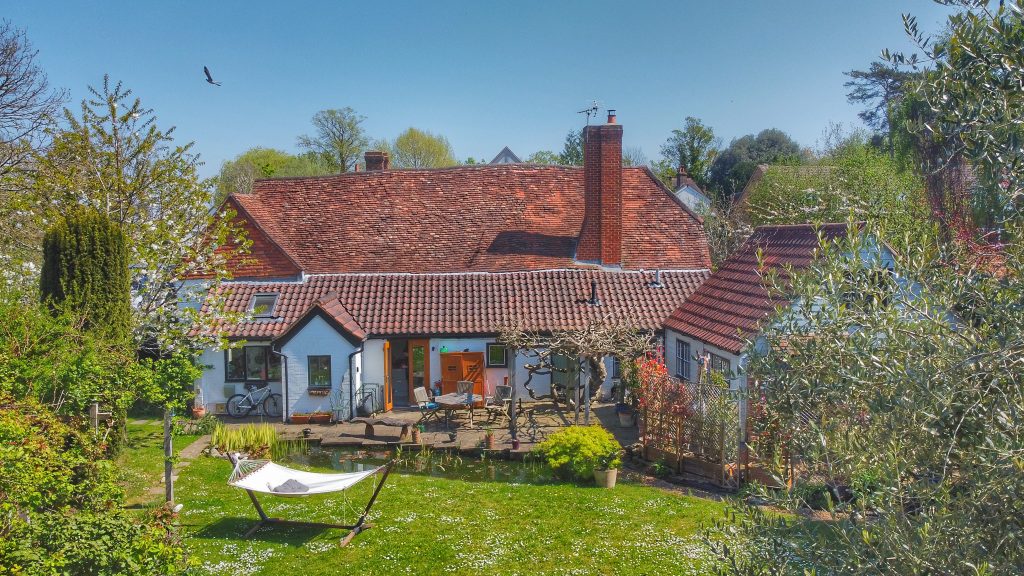 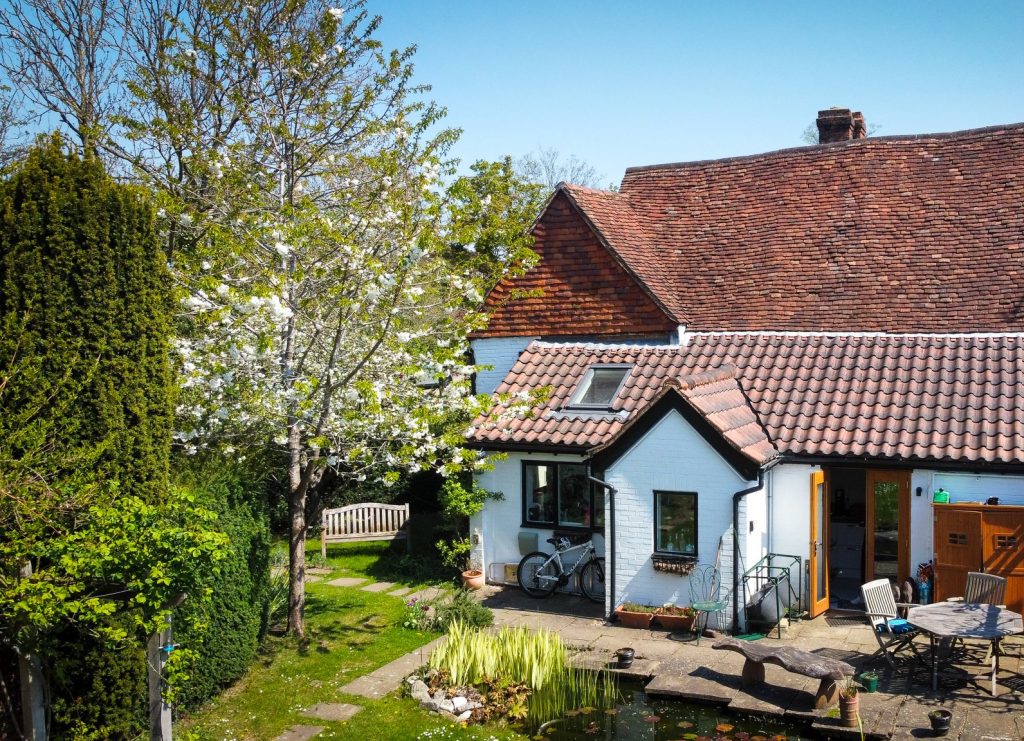 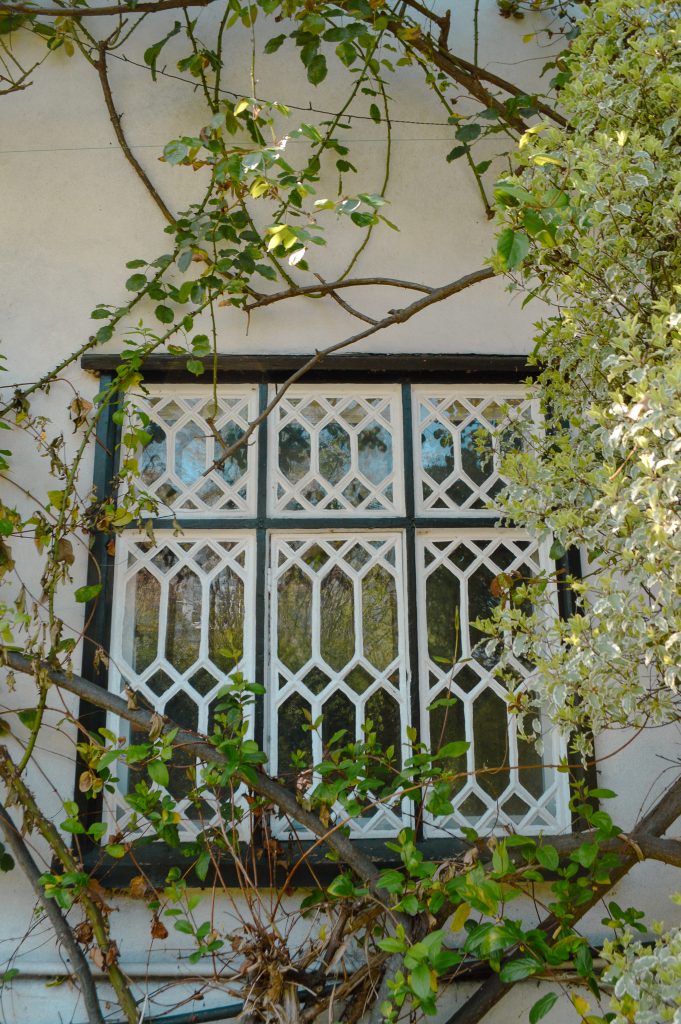 AirBnb Property in the Garden

The current owners actually rent out a little cottage house in their garden on Airbnb— you can stay here and experience these grounds yourself! 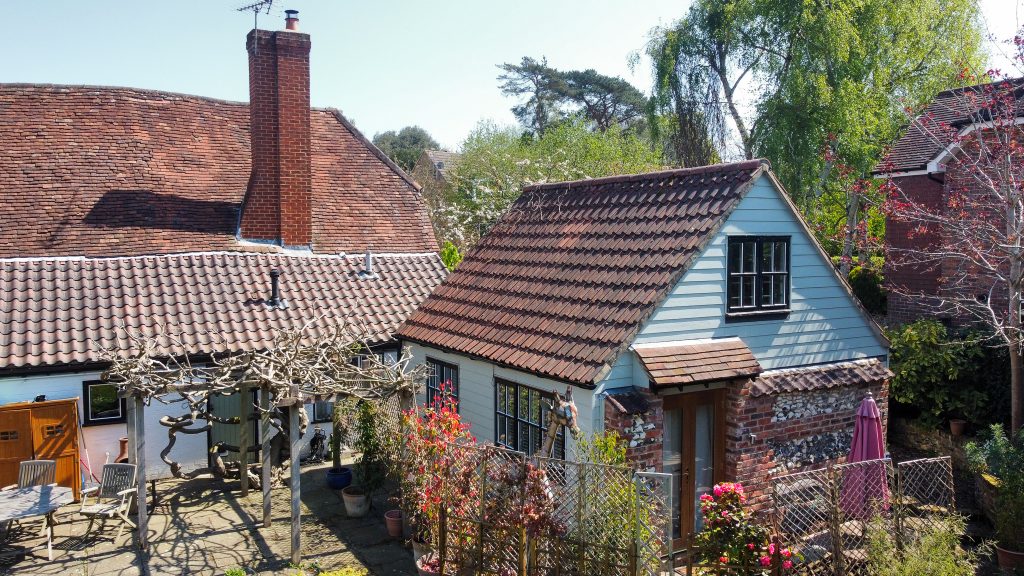 I would love to plan a visit to stay in this little cottage. Words can’t describe how charming it all is. 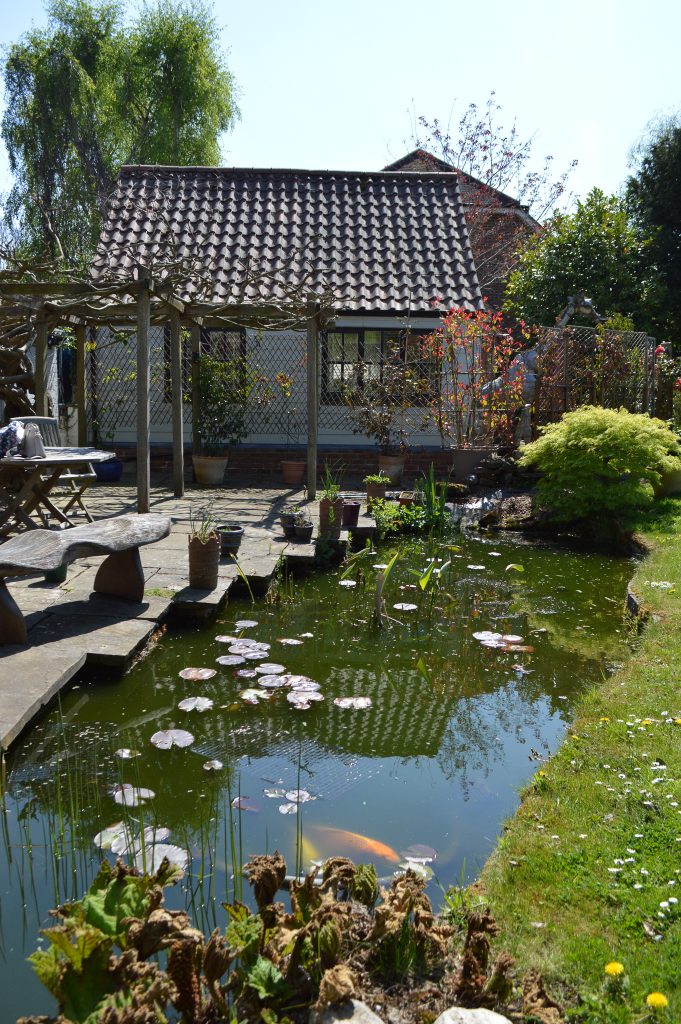 As you can see, this farmhouse is full of charm and character both inside and out. It is obvious to me that the family who lives here loves it. As with all old house owners I’ve come across, they feel honored to be the stewards of a historic house for their time here. 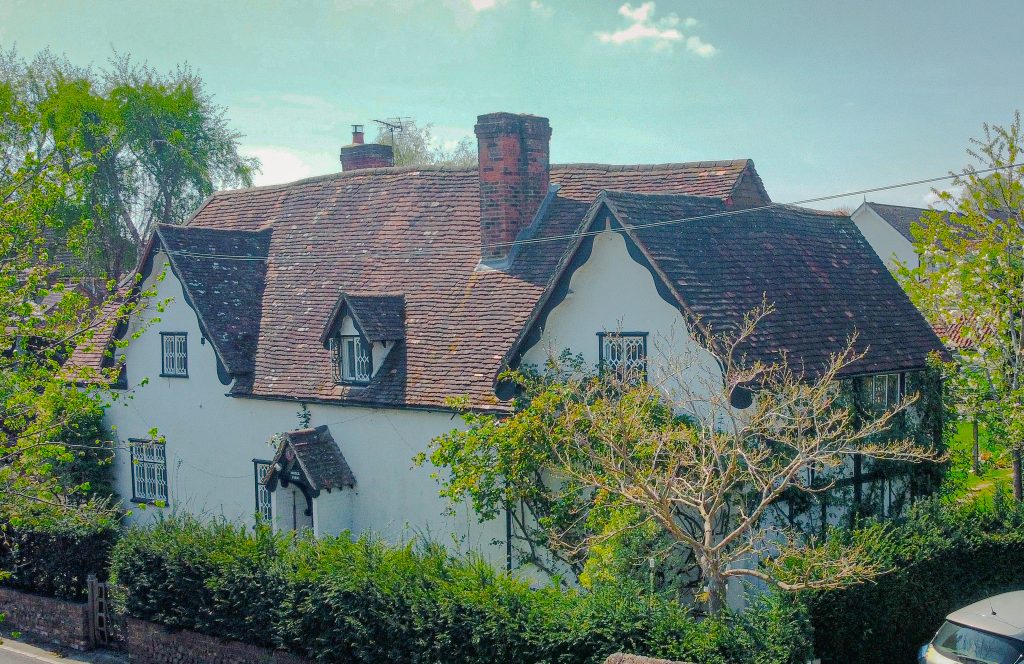 This house has stood for hundreds of years, and with the care it’s so obviously being given, it makes me happy to think of how it will stand for hundreds more to come.