Poison ivy has been the bane of Lynne’s existence since we moved here last summer.  Every project we’ve done outside (which has involved a lot of clearing out overgrown bushes, trees, vines, etc.) has resulted in her getting an awful blistery rash.  It’s actually gotten so bad she went on steroids.

The worst part?  Lynne’s one of those people who doesn’t even need to touch poison ivy to have this happen to her.  Sometimes we think she can touch another plant or even maybe a dog which may have come in contact with the poison ivy and that’s all it takes.  She always washes with cold water immediately after any outdoor project but sure enough… a few days later… the rash begins.

Our property has more than its fair share of poison ivy and poison oak.  Here’s a picture of what the leaves look like: 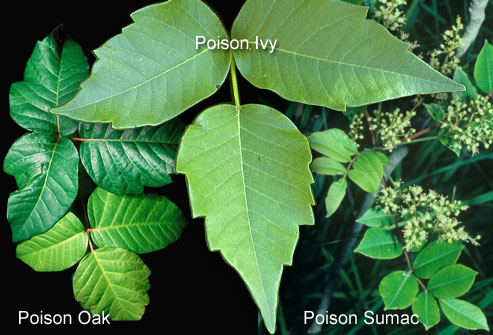 We may even have poison sumac too– there are so many overgrown plants that it’s hard to tell where one plant ends and another begins.  Oh but it gets better: poison ivy doesn’t HAVE to have leaves!  As our back yard can tell you, it also comes in vine form: 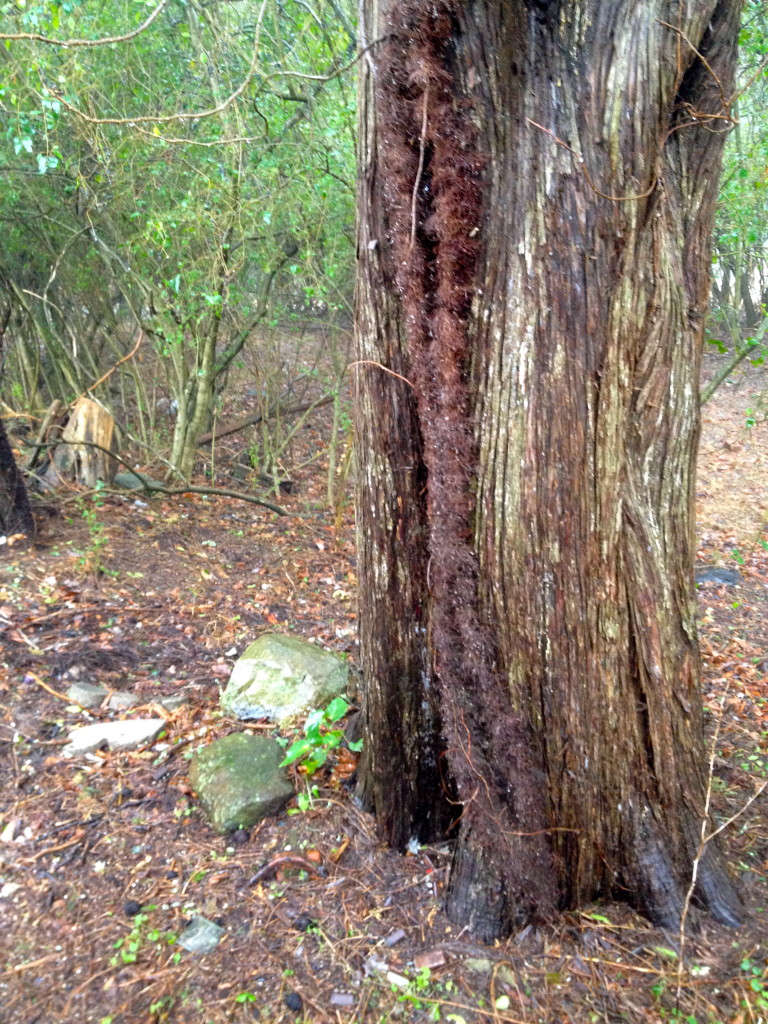 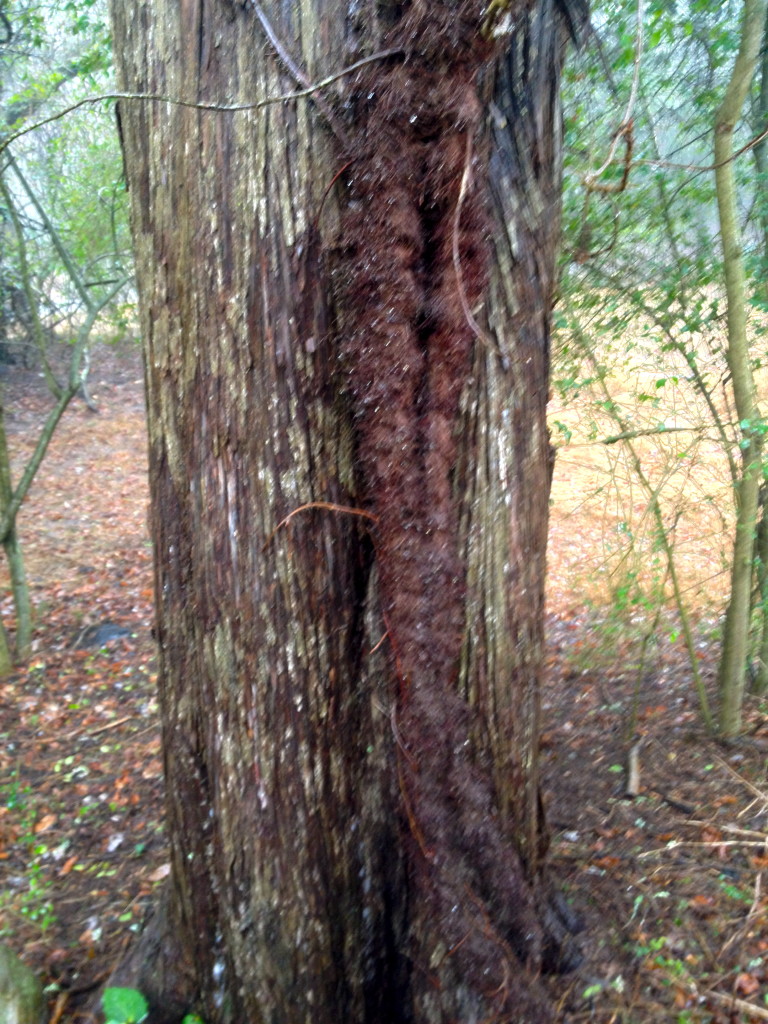 On New Year’s day, Lynne and I made the rookie assumption that they also wouldn’t have any oil (which is what gives the rashes) when the plants go dormant in the winter, so we cleared out some overgrowth in the soon-to-be garden area.

Turns out we hadn’t done our research, because we would have found out quite quickly that you can still get an allergic reaction from just the vines or the roots.   And of course even though she was wearing long sleeves and gloves and washed with dishwasher soap and cold water, Lynne developed a horrible rash on her arm.

I decided I’d had enough with this nonsense, so while Lynne was on a business trip, I made a trip to Lowe’s and bought myself a present — possibly the coolest thing I’ve ever purchased before (not to worry, the cashier had to verify I was over 18 in order to purchase it): 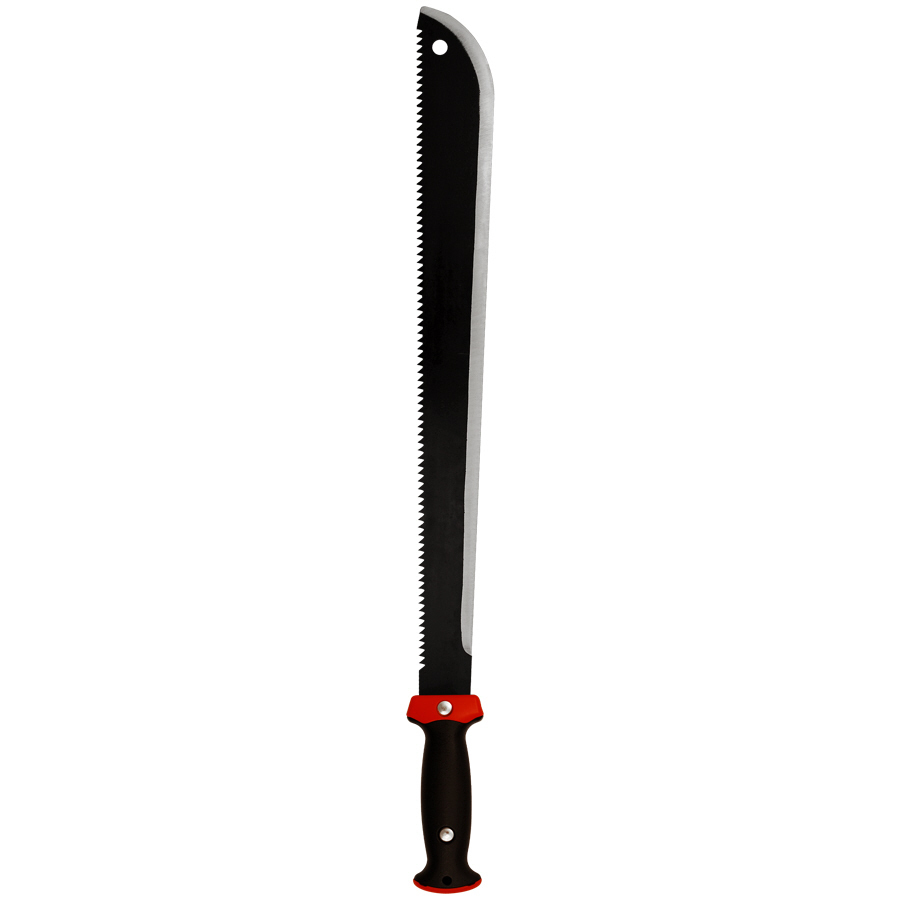 So I set about a plan: cover up as best as possible, cut these vines off near the ground (so they hopefully die by spring), then wash everything like a mad man.

I started by putting a plastic bag over my left hand and punching holes in the bottom for my fingers. 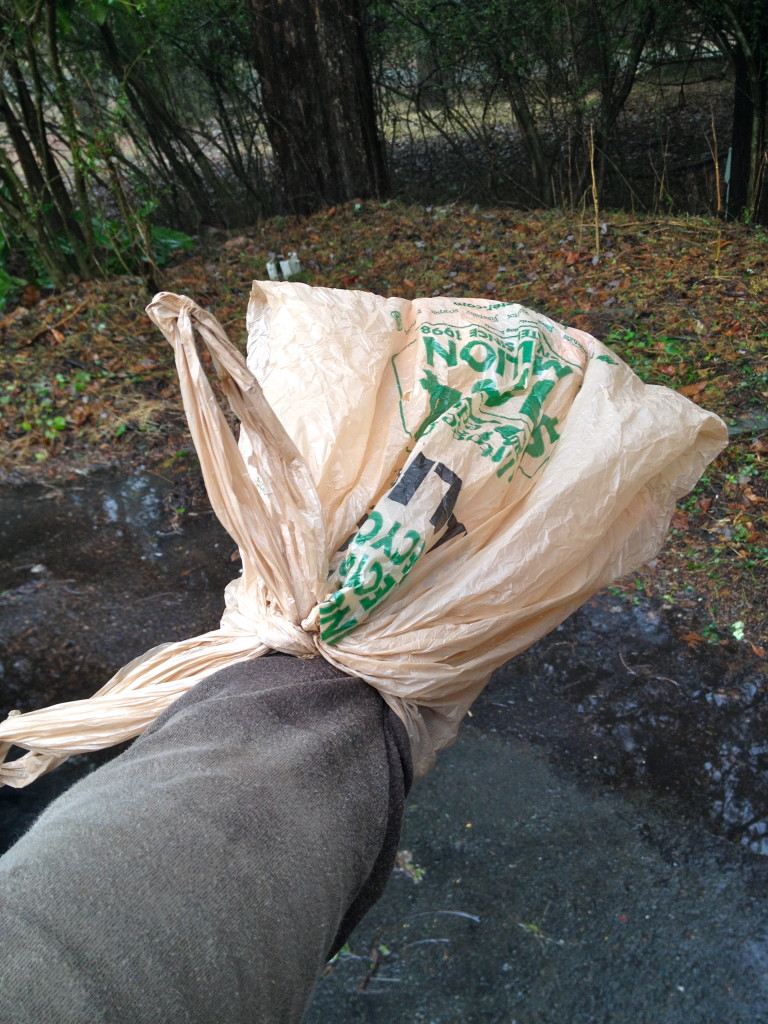 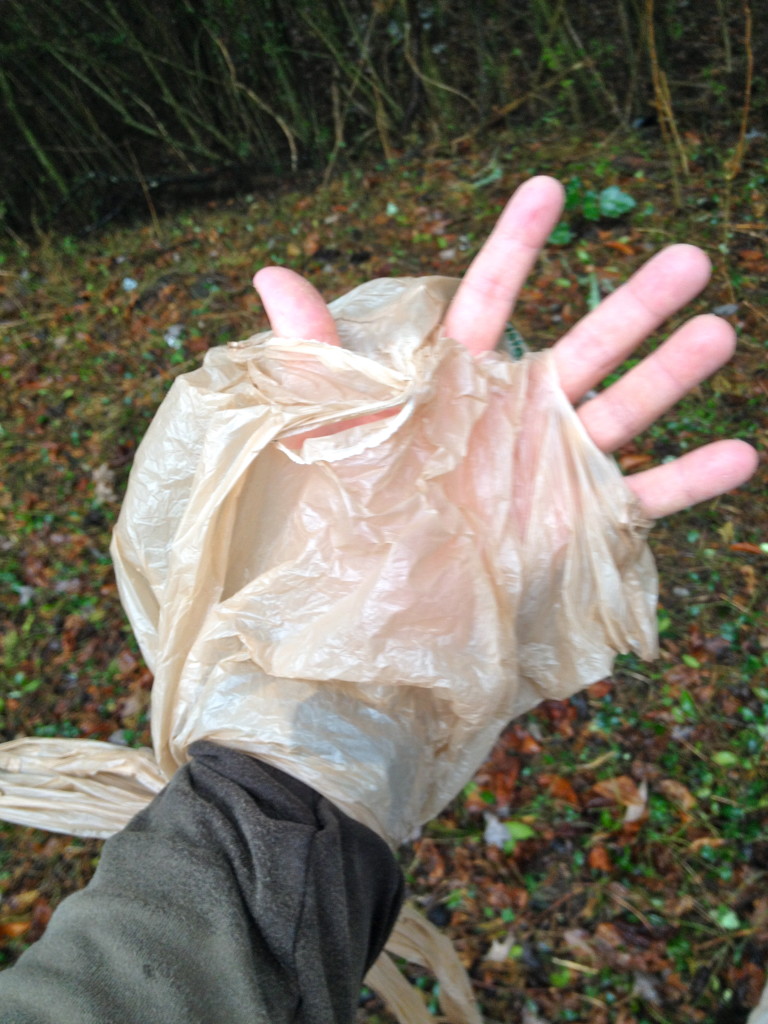 This allowed me to put a gardening glove (that I didn’t like anymore) over the bag for maximum protection. 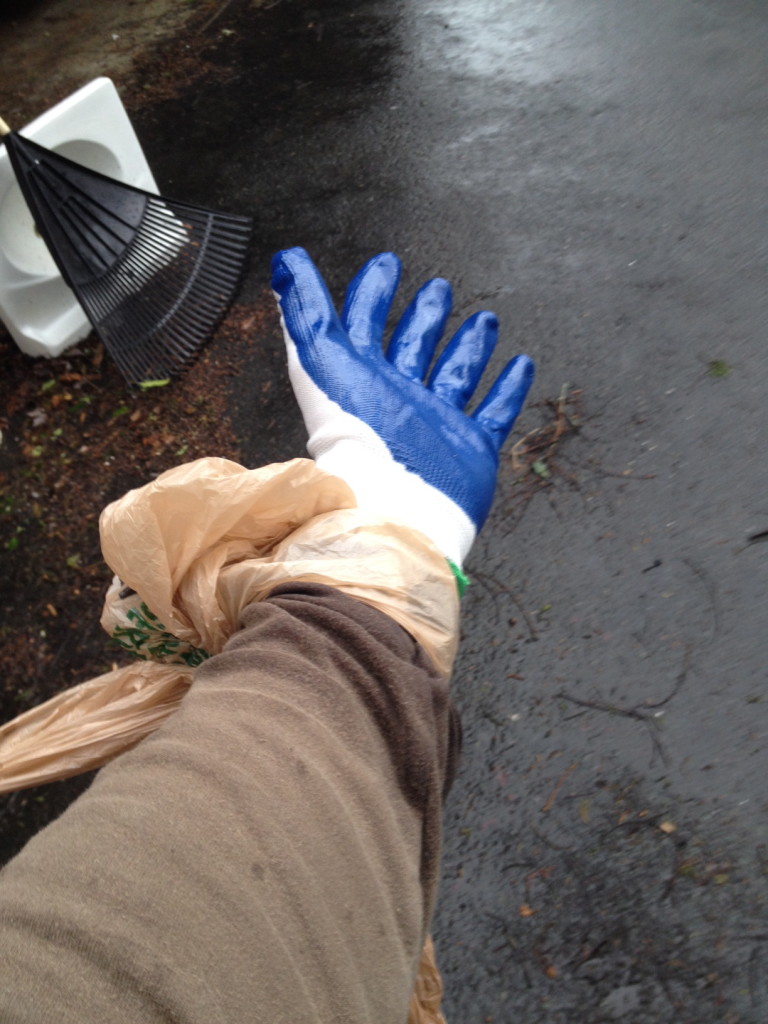 Now I can use my left hand to grab anything I need to touch which may be infected by poison ivy!  It’s time to just grab the machete and start hacking away.

My first few hacks taught me that 1) the poison ivy is less dense than the tree it was on, so when the machete has cut all the way through the vine, it will feel like you’re hitting concrete rather than vegetation and 2) those poison ivy vines are really dug in!  Originally, my hope was to pull the vines off the tree, but that is pretty unrealistic.  So I was content to just completely cut the top part of the vine from the bottom: 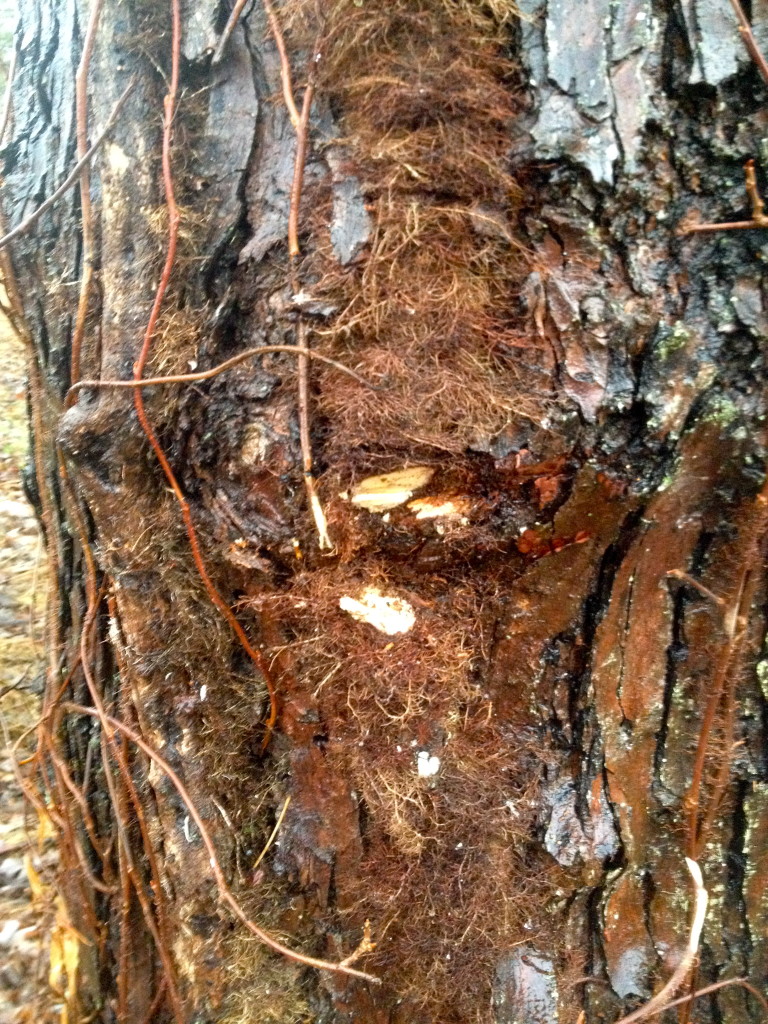 To completely get rid of the roots, we will have to come back with some poison ivy killer, but it’s a start!  I found one poison ivy vine which the last owners cut, so here’s what the dead version looks like: 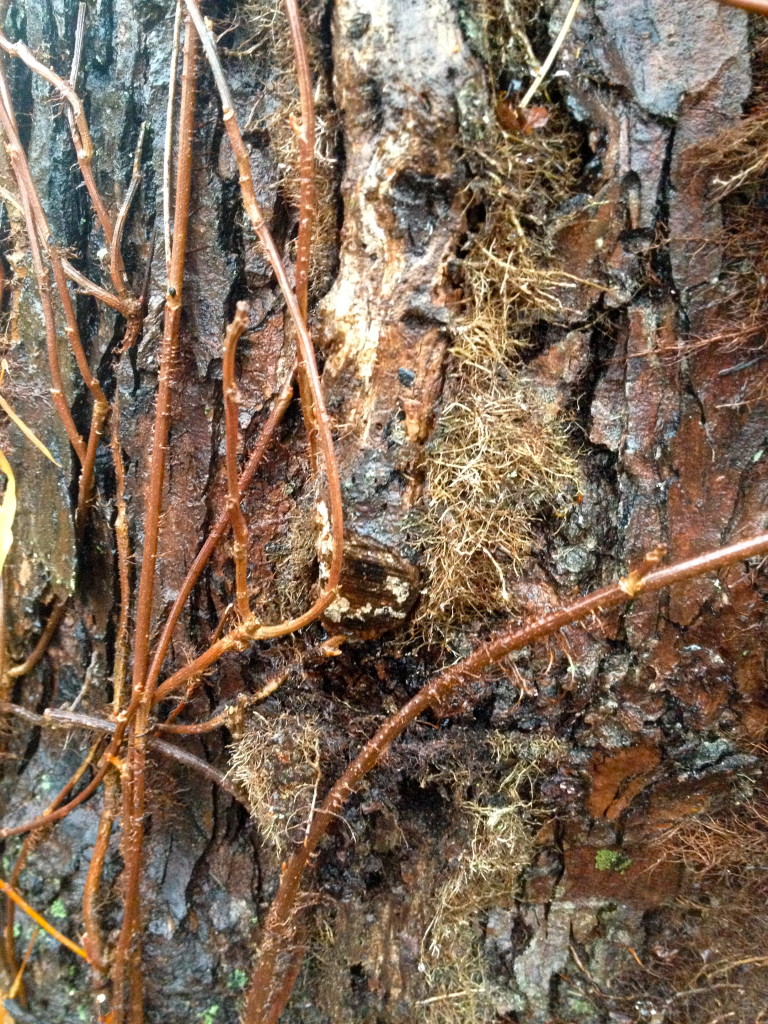 Once done, I pulled my glove off by grabbing the part of the plastic bag which is sticking out and threw it in the trash bag.  Then I threw my clothes and shoes in the washing machine on hot (very important that the water is hot) and scrubbed up in the shower.

I haven’t gotten any rashes yet, but wish me luck!