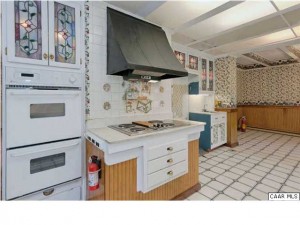 Recall the ceiling when we moved in: fluorescent lighting (above).

Then see the beams we discovered after we removed the plastic stuff (and the wallpaper, of course, below). 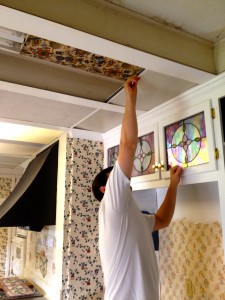 I decided to leave the beams white as I think stripping the paint would 1) take forever and 2) make the room seem somewhat claustrophobic.  I did some research on white ceiling beams in kitchens and came across these two gems of inspiration:

New game plan: Install “boards” above the beams, like the pictures above, to give it that open farmhouse feeling.
First, David took down all the tubes of fluorescent lighting in the transoms (between the beams).
We went to Lowe’s and picked up a few sheets of a wider beadboard– I think they were $13 a sheet. 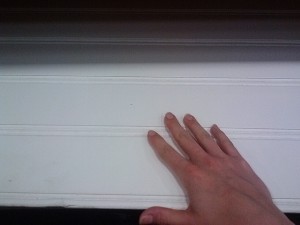 After we brought them home, we measured and– we probably could have done this ourselves but at this point our contractors were already at our house with their saws ready– the beadboard was cut to fit between the beams. 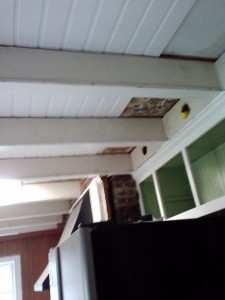 Sorry that picture’s a bit blurry.
We were so, so sick of taking off wallpaper that we  just put the boards on the wallpaper instead of taking the wallpaper off first.  In however many decades when someone else is redo-ing this kitchen, they’ll shake their heads and wonder what idiots installed PVC beadboard over wallpaper in kitchen ceiling transoms.  Haha– more power to them if they want to take the wallpaper off! 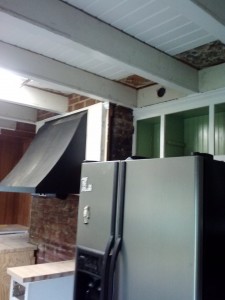 I think it’s going to look good once it’s all done!  Very farmhouse-y!  We still haven’t figured out how we’re going to do lighting in the kitchen but hopefully that will work itself out soon.
-Lynne