When we were Prepping for our First Winter Storm, I discovered what turned out to be heat tape on many of our pipes under the house.  I thought this slightly-more-expensive way to keep our pipes from freezing was great…  As of yesterday morning, our pipes were frozen 7 out of the 11 days prior, so I found out the hard way that our heat tape didn’t work.  But the lack of water didn’t bother me nearly as much as the chaos that came after they thawed.

Around 2:00 yesterday, I celebrated that our water was working again but noticed the hot water pressure wasn’t up to par.  I walked to the basement to check things out and found two plus inches of water on the ground and the basement walls spurting water with enough pressure to make a fire hose proud. 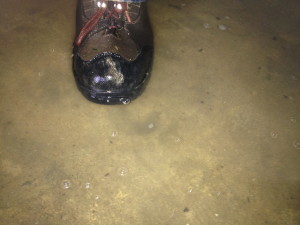 I ran to the crawl space in the basement to try to assess the damage: one gushing pipe and another leaking pipe.  On my way to the pump house to shut off the water, I saw a third leaking pipe.  Awesome!

I called our plumber because 1) I had no way of pumping the water out of the basement and 2) a problem like this just needs a professional.  I checked out the other crawl spaces and thankfully found out there were not additional issues.  So, having fixed a few leaky pipes before, I went about fixing what I could.

The idea behind fixing a basic leaky pipe is pretty straightforward: remove the leaky piece of pipe and replace it with something that doesn’t leak.  I am partial to PEX joints because they aren’t overly complicated, don’t require many tools, and work with both copper and plastic (e.g. PVC, PEX) pipes.  To fix one of the leaks, all I needed was a 3/4″ coupler joint and a copper tub cutter. 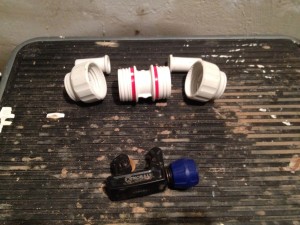 The first step was to identify the leak: DONE.  The hole is on the other side of the pipe, but believe me, it’s there. 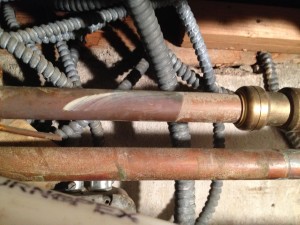 Next, I opened the cutter all the way, placed the pipe in cutter, and tightened the cutter just enough so it didn’t fall off the pipe.  This particular pipe was in a pretty tight place (yes, I know, our electrical is a mess), but leaks can be rude like that. 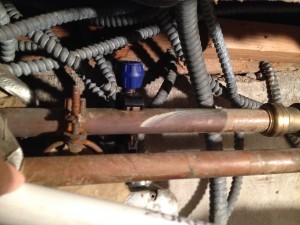 Next, I spun the cutter completely around the pipe a couple of times, starting the cut. 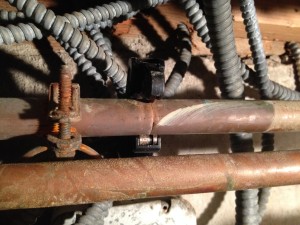 Every few spins, I tightened the cutter just a little, which made the cut deeper and deeper.  After spinning for a while, the pipe cut through.  Repeating this on the other side of the leak allows for easy removal of the broken portion of pipe. 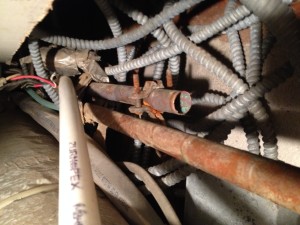 To put the PEX joint on, I slid the little insert into the pipe (this keeps the pipe from deforming)… 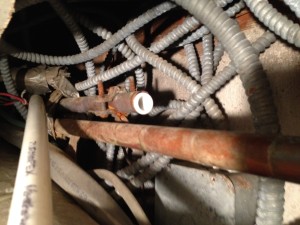 Slid the locking nut onto the existing pipe… 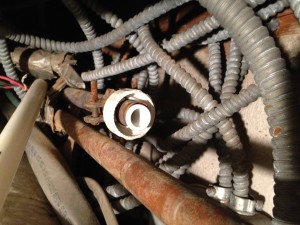 Placed the pipe coupler onto the pipe… 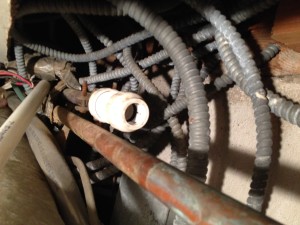 And hand tightened the locking nut!  Repeat on the other side of the pipe, and our leak was fixed!!! 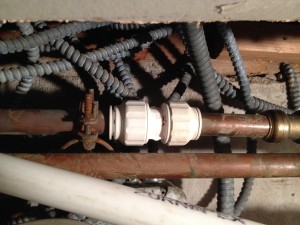 Now I have to say that this was a pretty easy leak to fix, and they don’t always go this well.  In fact, the other two went quite poorly, and I was so glad I called our plumber.

As some background, our well water is more acidic than normal, giving it a tendency to wear down our pipes.  This means thinner, more fragile pipes that can easily spring leaks, plus cutting the pipes can be extremely difficult because they bend rather than cut.  To show you what I mean, here is a picture of the pipe I cut out in the demo above: 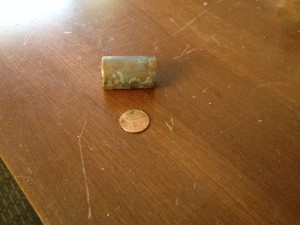 Here are the remnants of the pipes our plumber had to deal with for about an hour: 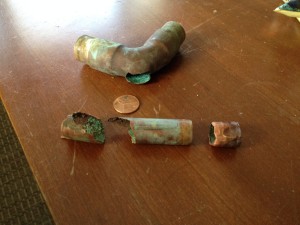 Pretty ugly, but again, I am really glad someone else had to deal with it 🙂

4 thoughts on “Fixing A Broken Pipe (Thanks Winter)”