Toto, we’re not in DC anymore…

This happened a few days ago but I’d be remiss if I didn’t mention it on my blog.  David and I were eating dinner in the sunroom when suddenly our dogs started furiously sprinting to the dining room and running all around.  We thought they were just playing tag or something with each other, as they often do, but then we realized they’d been running around the dining room for more than just a few seconds (which they don’t often do).  David went over to check out what was going on and suddenly something whizzed past him on the floor, the dogs whizzing by moments later.  I gasped (he might use the word shrieked but that’s so unladylike) and promptly ran upstairs.  I heard the dogs, both of which are 80+ pounds by the way, running all over the first floor and David running after them for a good ten minutes!  Okay, it was probably only one minute but it seemed to go on forever.  Things were crashing and I could hear furniture being pushed around in different rooms simultaneously as the dogs tried to get a grip and follow their mystery creature.  Finally my curiosity got the better of me, and I tiptoed down the stairs to find both dogs doing a very good S-I-T by the fireplace in the kitchen as if they were expecting a treat in return.  I looked up to where their eyes were gazing and saw what I thought to be the weirdest mouse ever.  David snapped a few pictures then calmly walked around trying to find the displaced broom and dustpan (I think our thought was to sweep the weird mouse into the dustpan and hurry it out the door?) when suddenly the weird mouse flew off the chimney wall and into the sun porch, and the furious sprinting began once more. 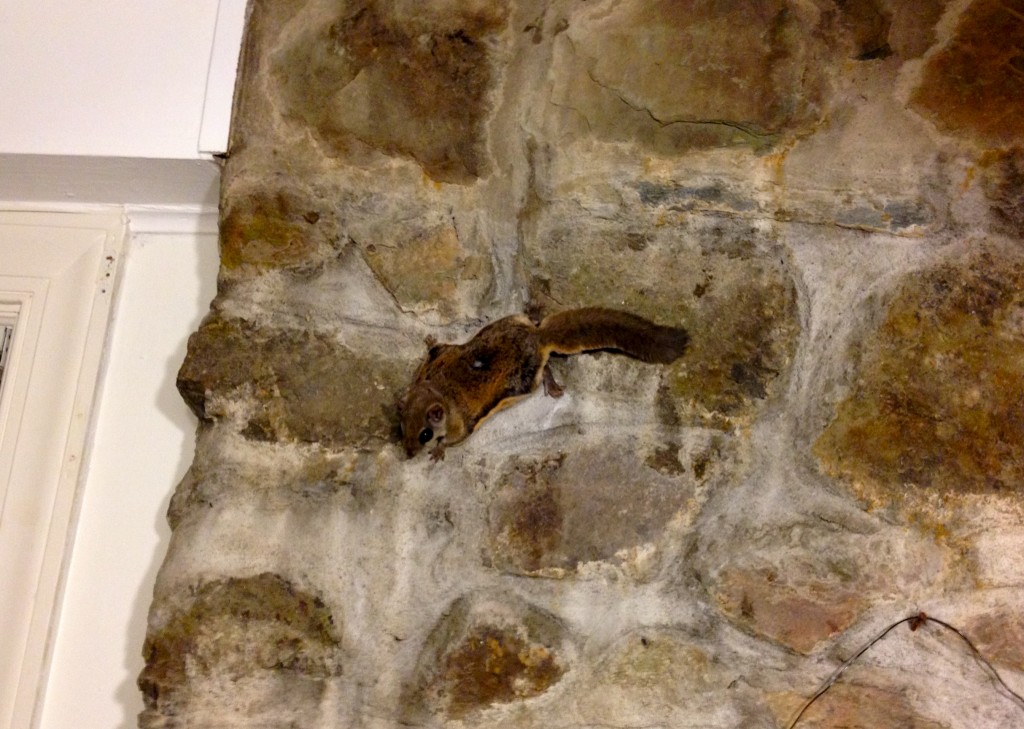 I gasped again and started to run upstairs to safety when David (calmly again, ugh) opened the back door and apparently all three animals furiously sprinted away to the backyard.  That was the last we saw of what we then realized was not in fact a weird mouse but a flying squirrel.  He closed the back door, we glanced at each other and at the totally disheveled house, and just cracked up at our new country lifestyle.  Never a dull moment around here!