Remember, once upon a time, when the half-bathroom was the only room done in the house and we were so thrilled? 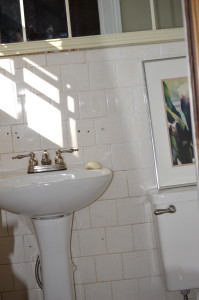 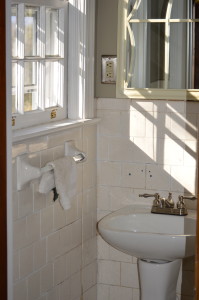 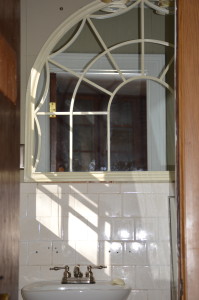 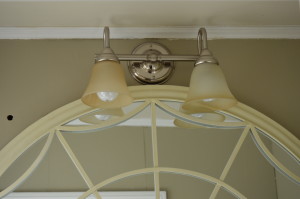 Well, then it came time to replace the pipes and we had to tear out the walls and floor in the half-bath, meaning it was no longer done.

We were very sad about how our one “finished” room became quite the opposite.

But, slowly, the pipes got replaced (the whole house is almost done, five months later) and the contractors put up drywall.

David primed the drywall, which just soaked up primer, then we decided what color to repaint the bathroom.  Even though I love Benjamin Moore’s Sag Harbour Gray we had before, we had a lot of leftover Farrow & Ball Hound Lemon from the upstairs bathroom.  (And Farrow & Ball is really expensive!)  We knew we didn’t have enough left to paint a big room but we did have enough for the bathroom, so we decided both bathrooms would be Hound Lemon.

After David primed again with Farrow & Ball primer, my little brother came to help us for a day and painted the walls and ceiling with Hound Lemon. 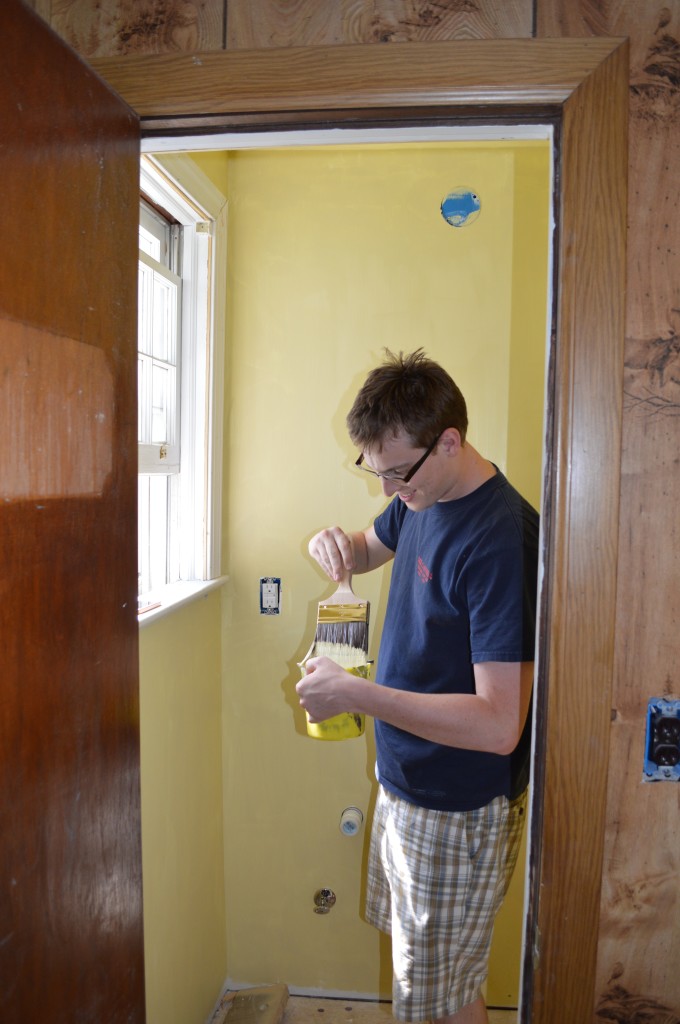 It turned out really well in my opinion!

After he finished painting, we (and by we, I mean David and my stepfather) re-installed the toilet, pedestal sink, mirror, and light fixture. 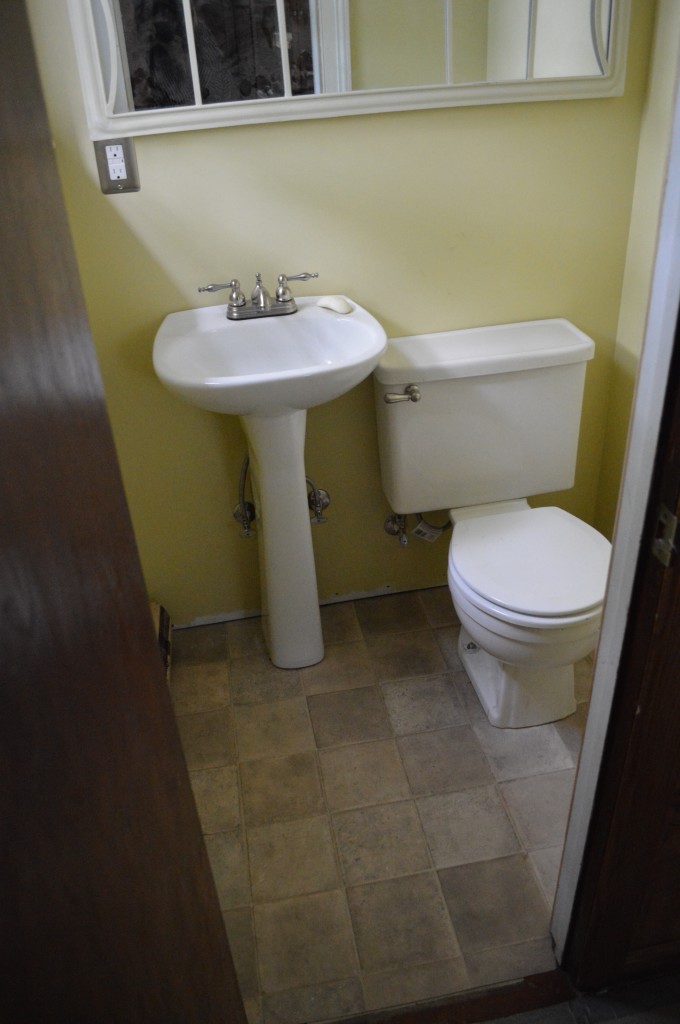 My mom and I cut out the floor just like David and I did for the first go-around. 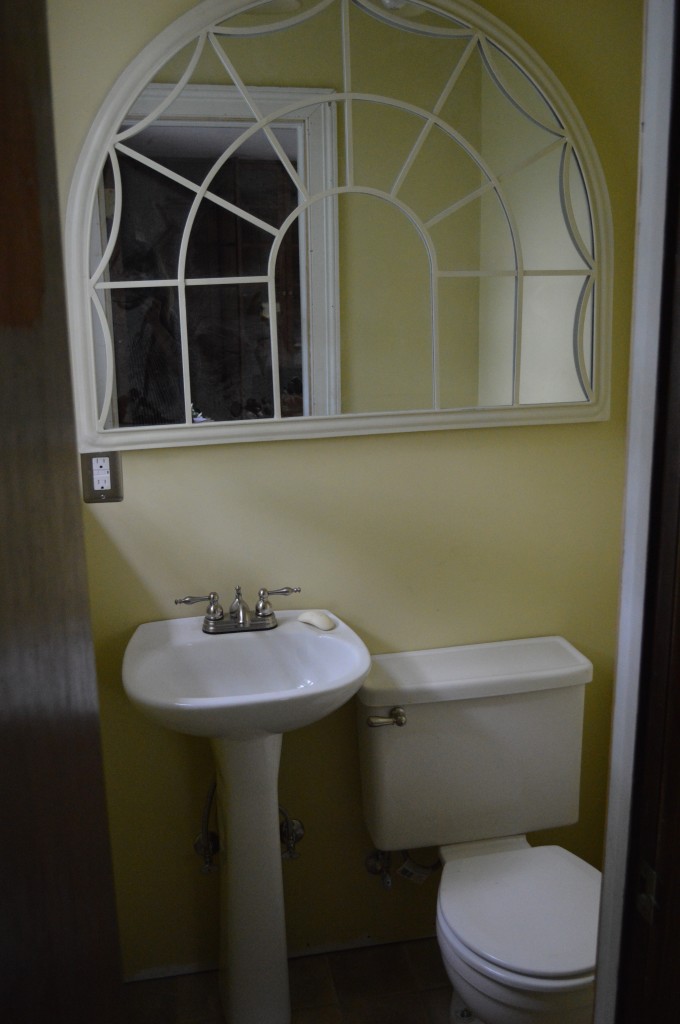 Now, we’re still not done.  We need baseboards and trim around the door/ window, plus the accessories like toilet paper and towel holders.  But at least it’s functional! 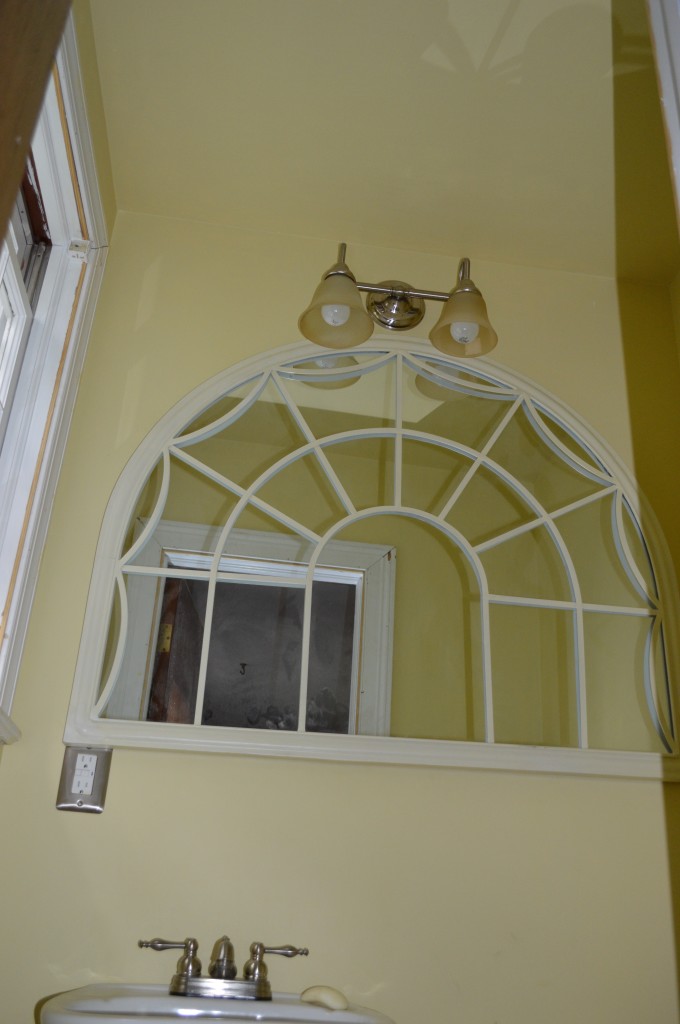 Above is a picture of the ceiling painted the same color as the walls.  Because it’s such a small room, I felt like it was choppy to have the ceiling a different color.  It makes the walls seem taller for sure, even though it is a lot of yellow!  One thing I love about this yellow though is it really changes with the light.  Sometimes it looks beige and other times it’s bright yellow; other times it is a faint pastel.  Although Farrow & Ball is expensive, I understand why people use it and I’m glad we’ve tried it in two rooms of our house!  I’ll share pictures of the finished guest bathroom upstairs soon.  🙂

1 thought on “Half-Bathroom Back Together”