When we found out we were pregnant, I made two demands: by next winter, we would have dependable running water (aka replacing all the plumbing in the house) and heating for the main floor.  We had working baseboard heating in the family room and half-bathroom and that was it.  NOT a place to bring a baby home to, especially when none of the fireplaces are able to have fires!  (That’s a whole ‘nother blog post.)

We did get all the plumbing replaced— and renovated a bathroom in the process while everything was exposed anyway– but up until recently, we hadn’t figured out how to heat the main floor.  (Upstairs has functioning baseboard heaters.  Plus we got A/C up and working again upstairs too.)

So in the past few weeks, we have finally gotten around to making some changes.  A lot of pregnant women go through a nesting phase where they research/ buy/ clean a ton.  My nesting phase was researching heating systems and getting estimates from various companies.  Overall, we had five heating/ air conditioning companies come out and give us estimates.  (Side note: One guy told us our house was too complicated and he’d have to check with his manager to see if their company was even interested in taking on a project as big as ours– they ended up not being interested and didn’t get us an estimate.  So technically we actually only got four.)  The issue with our house, as is the case with all older homes, is it wasn’t designed with air ducts in mind…  meaning the crawlspace isn’t big enough for traditional air conditioning/ heating ducts, and there’s no room between the walls or floors like newer houses. 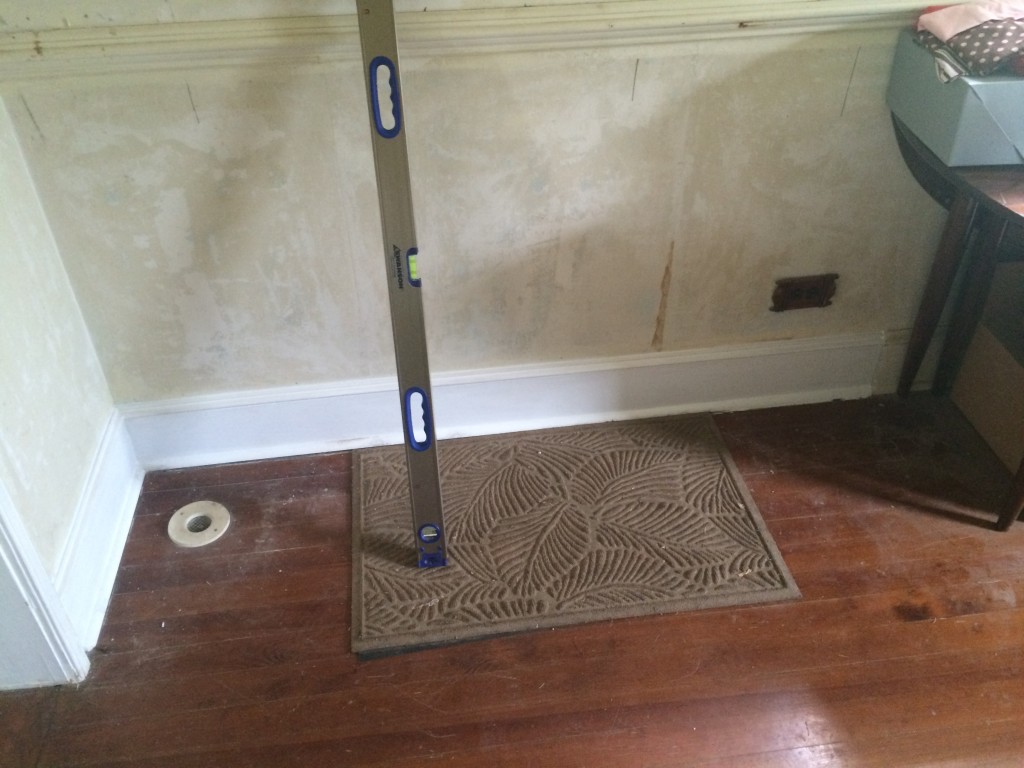 He did a pretty good job, huh? 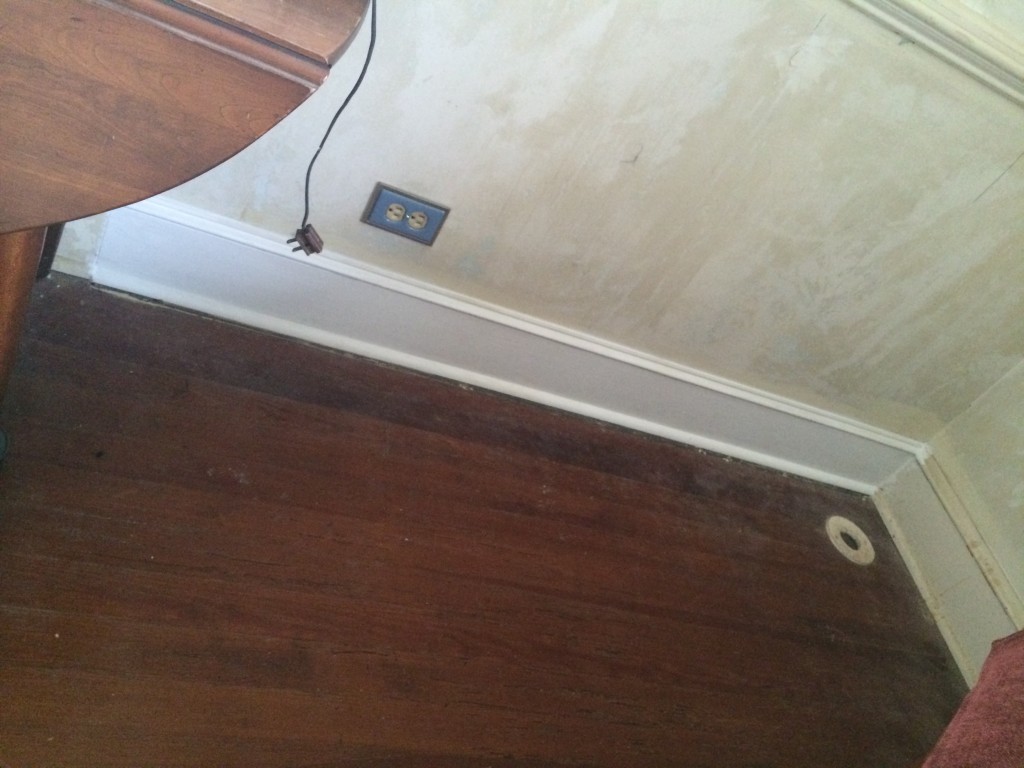 You may have noticed those little circles in the floorboards.  They were installed for the old air conditioning system downstairs, a high velocity system that uses much smaller tube-like ducts than a conventional system.

This website describes the differences between a high velocity and a conventional system really well (better than I could at least, even after all of my nesting research!): 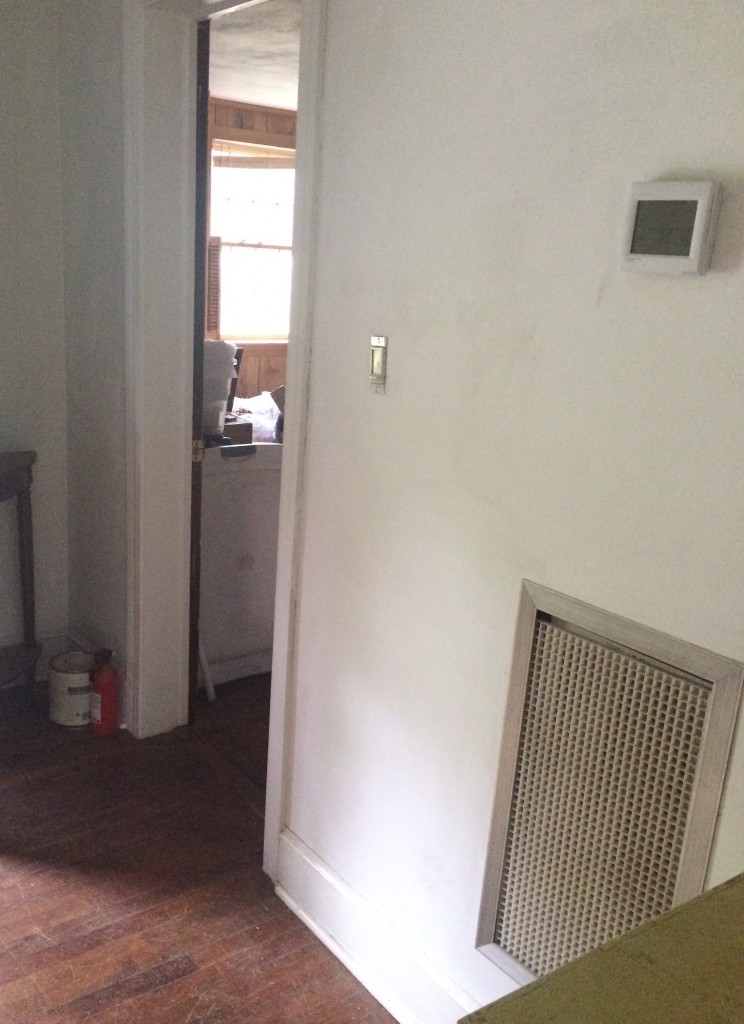 Behold, our new thermostat in the hallway (above the existing return)! 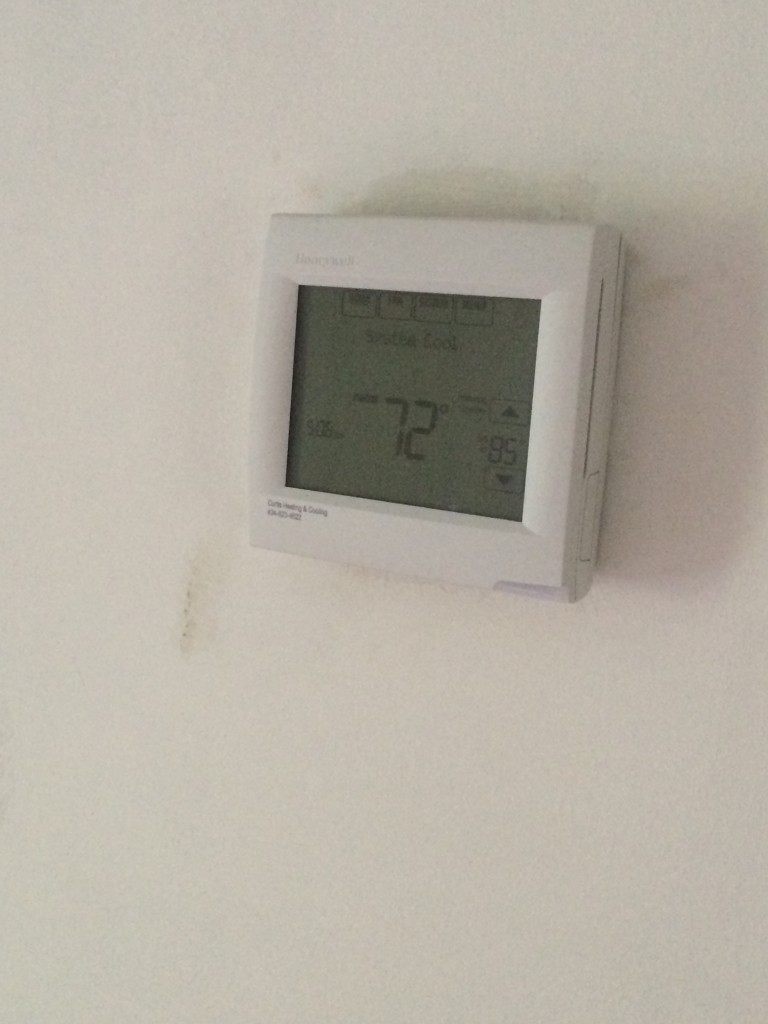 Isn’t that the coolest?  The downside is it’s smack dab in the middle of the wall, but the air return was already there anyway so I don’t really care too much.

There was, however, a catch to heating and cooling the first floor: the kitchen.  The kitchen was different from the rest of the first floor for two reasons: one, half of the kitchen subfloor was thick stone while the other half was wood (and cutting through thick stone for the air flow was impossible); two, the existing air conditioning circles in the floor were in really bad positions (in the middle of where you would walk, not in the corner of the room where they should be– meaning the high velocity air flow would blow your skirt up, or kick dog fur straight up into the room) and needed to be moved… except there was no good place to move them to due to the thick stone.

This presented quite a problem.  The rest of the house could be converted using the high velocity system but the kitchen couldn’t.  We toyed with a bunch of ideas until finally we decided on… drumroll please… a ductless system! 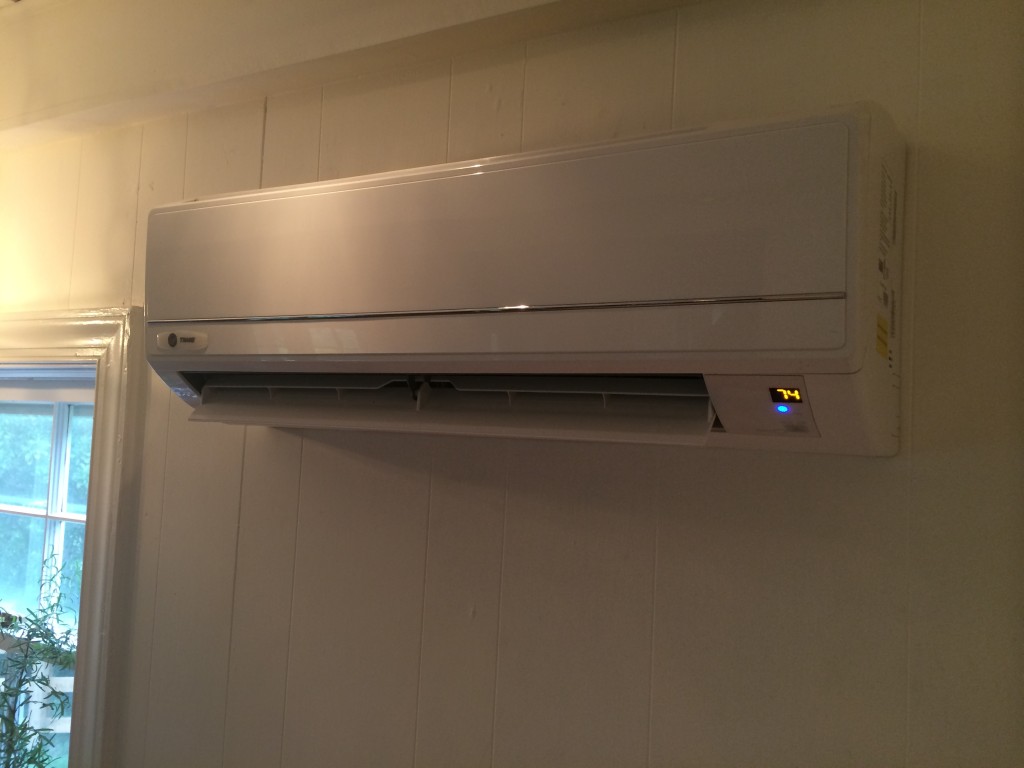 A ductless heating and air conditioning system is basically what each hotel room has.  You can heat and cool the whole room independently from the rest of the house. 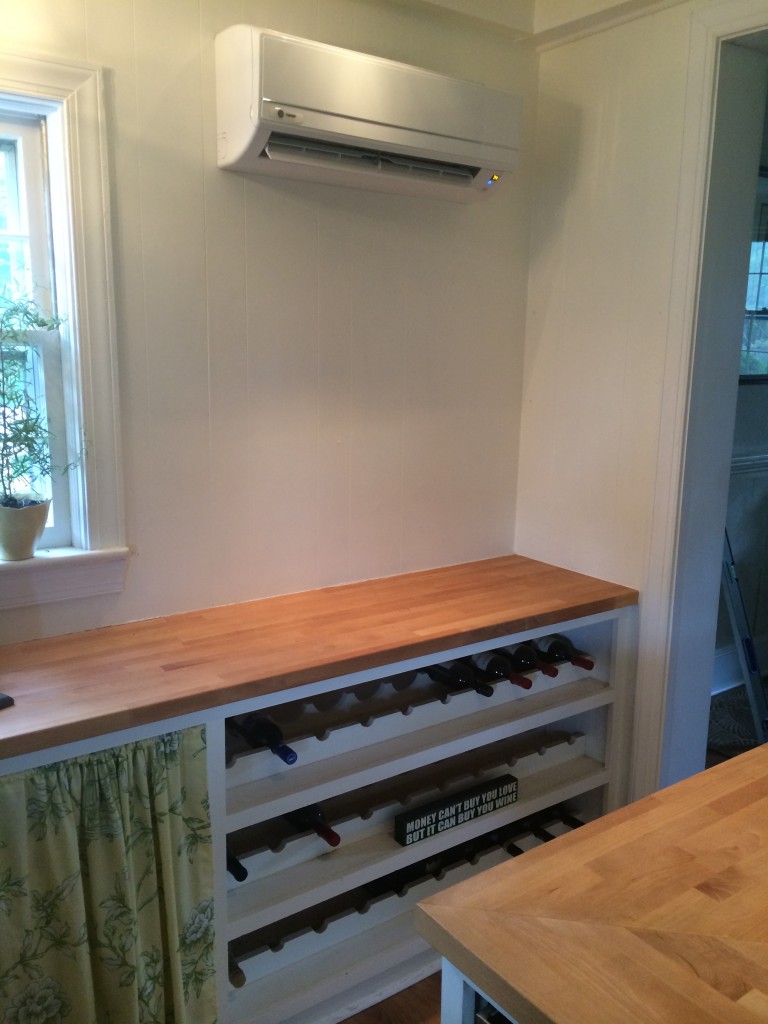 Ductless systems are extremely efficient– more so than high velocity or conventional– so we’re hopeful it will do a good job heating the kitchen!  So far it’s doing a great job cooling but then again it hasn’t gotten tooooo hot yet (so grateful, don’t get me wrong!  Best August to be pregnant EVER!).  They’re also very affordable to run after the initial expense of installing one.  Their one downside is they are very obvious and not concealed whatsoever.  This was my main drawback to ductless, but ultimately, it’s actually not too noticeable above the wine rack in the kitchen.  I wouldn’t have wanted one of these in every room of my house but for one room, especially one corner of that room, it’s not bad at all.

So with that in mind, we’ve crossed off everything I HAD to have done before baby comes!  (Hear that, baby?  We’re ready for you now!)  At this point we’ll just be playing the waiting game!