Here are some pics of our master bathroom as it’s being converted to a guest bathroom! 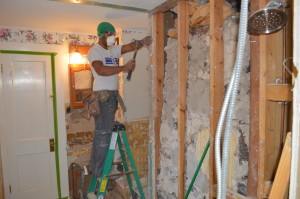 Above is a pic of our contractor Lucio working to carefully remove the old drywall from the old beams supporting the old chimney.  This was actually pretty tricky demolition because of the age of the drywall/ chimney and a sledgehammer (which is what David and I would’ve done) could have caused irreplaceable damage. 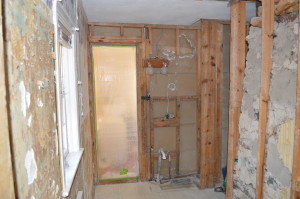 This one is a pic after the demo.  At this point there was dust everywhere, even though they put a plastic tarp over the door.  With this kind of a renovation, dust somehow goes through plastic tarp… it’s such a strange phenomenon. 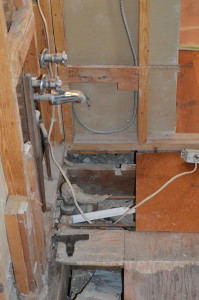 Above is where the tub USED to be! 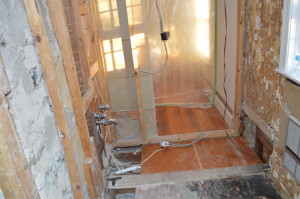 The photo above this shows the new hole in the wall going into the guest bedroom where we’ll be re-using the door from the master bedroom to the bathroom.  No more tub/ shower! 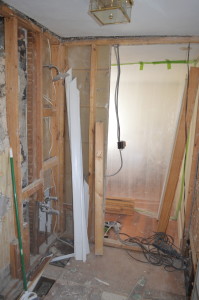 This one shows the delicacy of all the plumbing and wiring in the walls.  This space has probably been remodeled dozens of times over the past century and a half due to all the different wires, tubes, pipes, etc. in the walls. 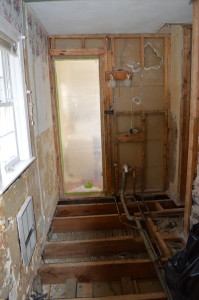 The above pic shows the bathroom sans floor!  (As it turns out, the beams needed to be replaced due to water damage… surprise surprise, story of our life here.)

In the picture above you can see the chimney (originally brick but now somewhat covered in concrete, wallpaper, and stucco we think).

Stay tuned as we keep going!!