Lovingston Winery sits just south of Charlottesville in the outskirts of Lovingston, Virginia within an absolutely charming farmhouse. I’m delighted to tour this farmhouse of lovingston with you today. Now the tasting room for this award-winning winery, this farmhouse was a family home for generations. The wine is spectacular, but what really makes this place special to me is the incredible atmosphere of being on this historic farm. Join me for a tour below… 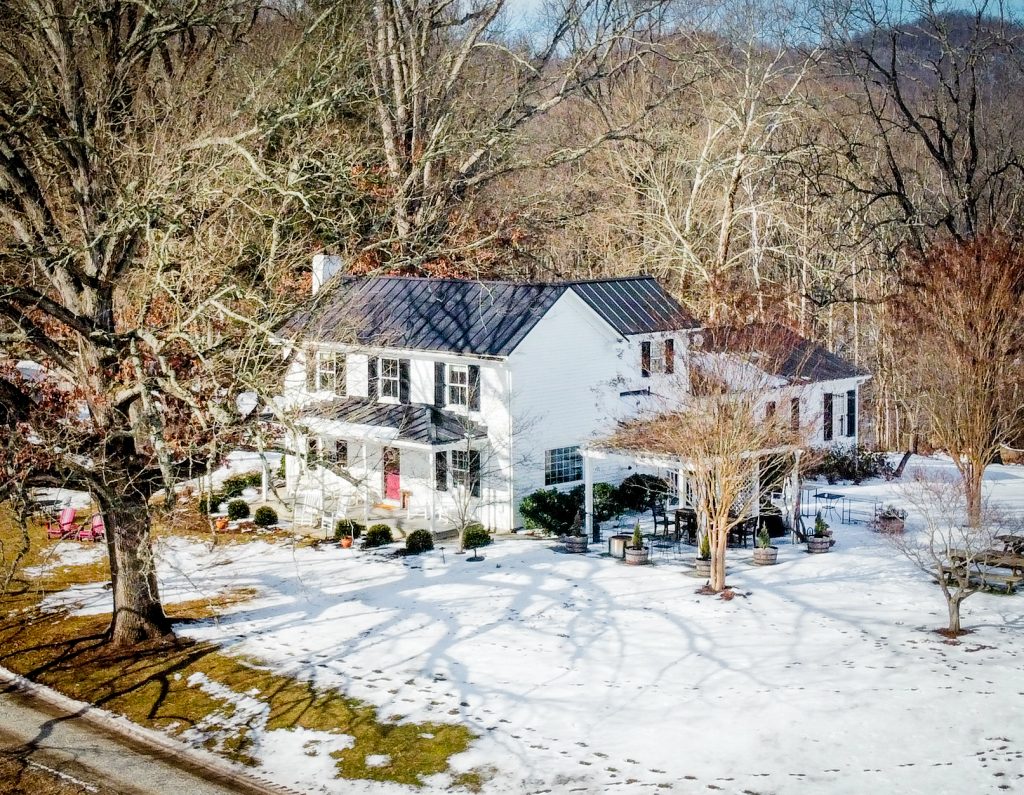 The simple farmhouse was constructed in 1906 by John Stevens and his wife. John’s wife was very ill during their first year on the Knoll so they hired a caretaker named Josie. Josie cared for John’s wife until she passed. After his first wife’s passing, John quickly married Josie. (Talk about a scandal! Even bigger scandal: John and Josie had a 24 year age gap. Josie was just 18 when she married John who was 42. John’s eldest son was only 2 years younger than Josie!)

John had 5 children from his first marriage and went on to have 5 more with Josie. Over the years the farmhouse served as the gathering place for the large family. The matriarch of the family, Josie lived on the Knoll for the rest of her life and hosted numerous family reunions. 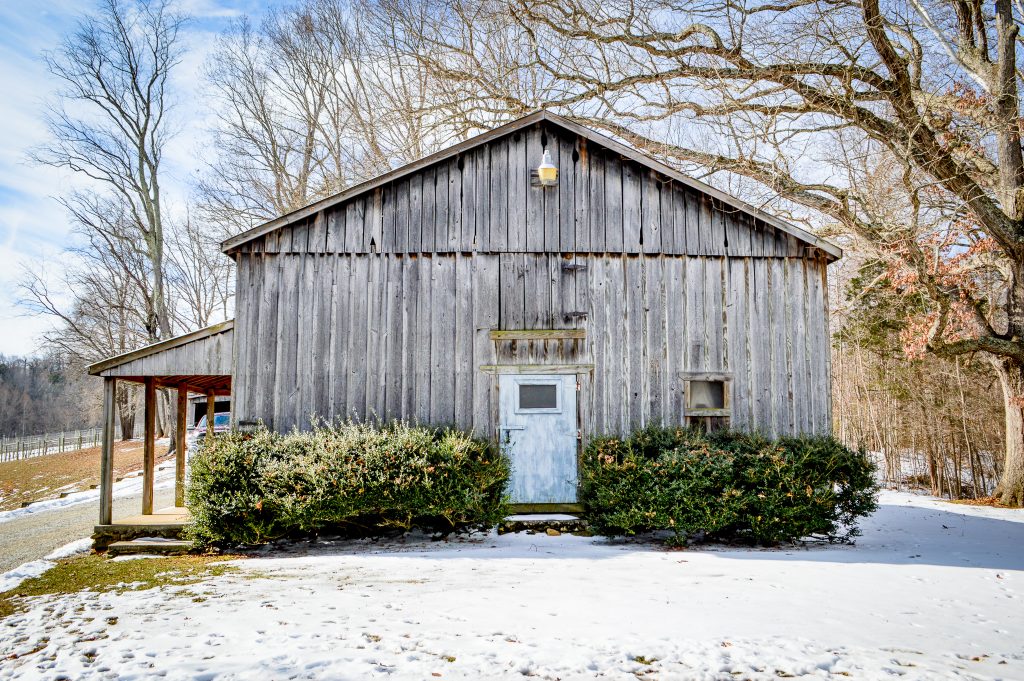 I love the beautiful old outbuildings on the property. This charming one has such a sweet setting, doesn’t it?

Apparently Josie’s family loved to party. At one point they cleaned out the woods behind the farmhouse and pulled so many wine bottles out that they ended up with a 20 foot wide by 4 foot tall pile! Needless to say, wine has been a part of the property in one way or another for many many years. 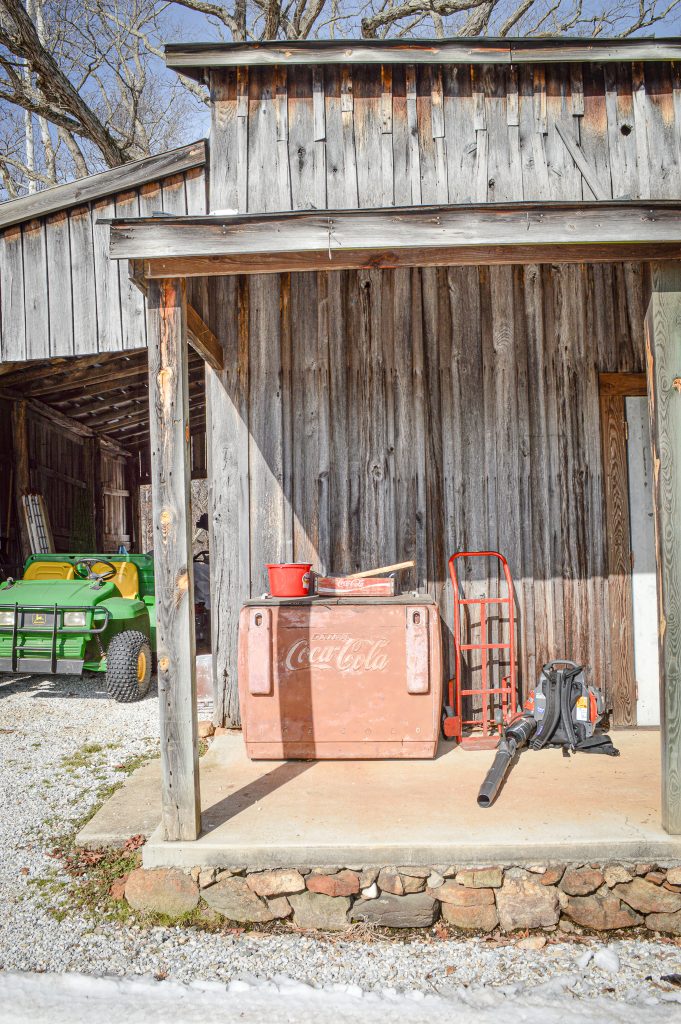 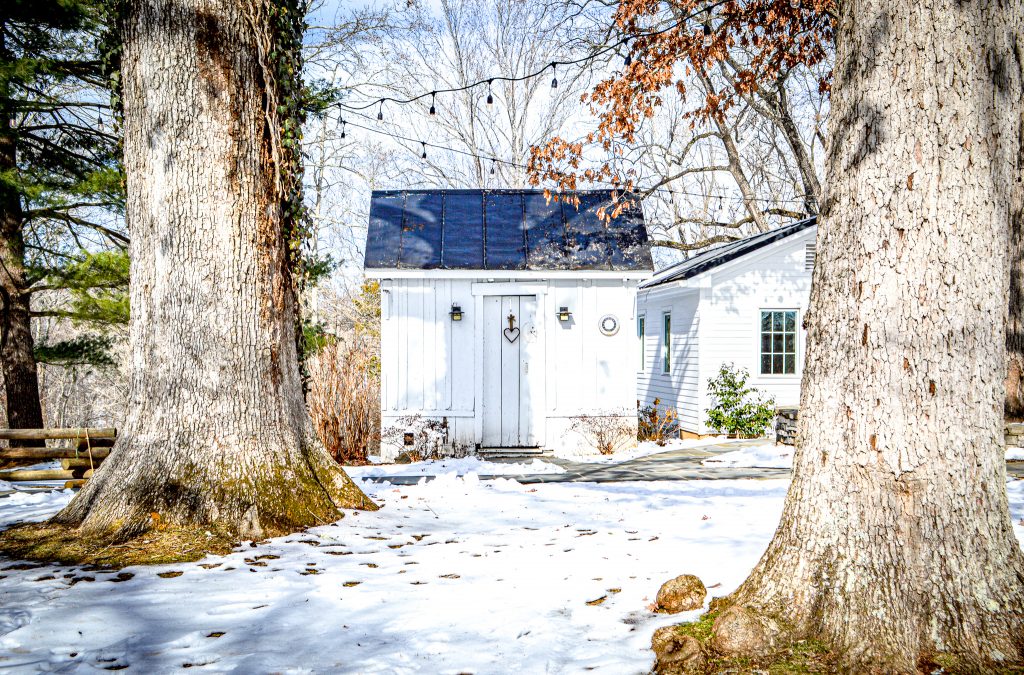 Additions Over the Years at Farmhouse Lovington 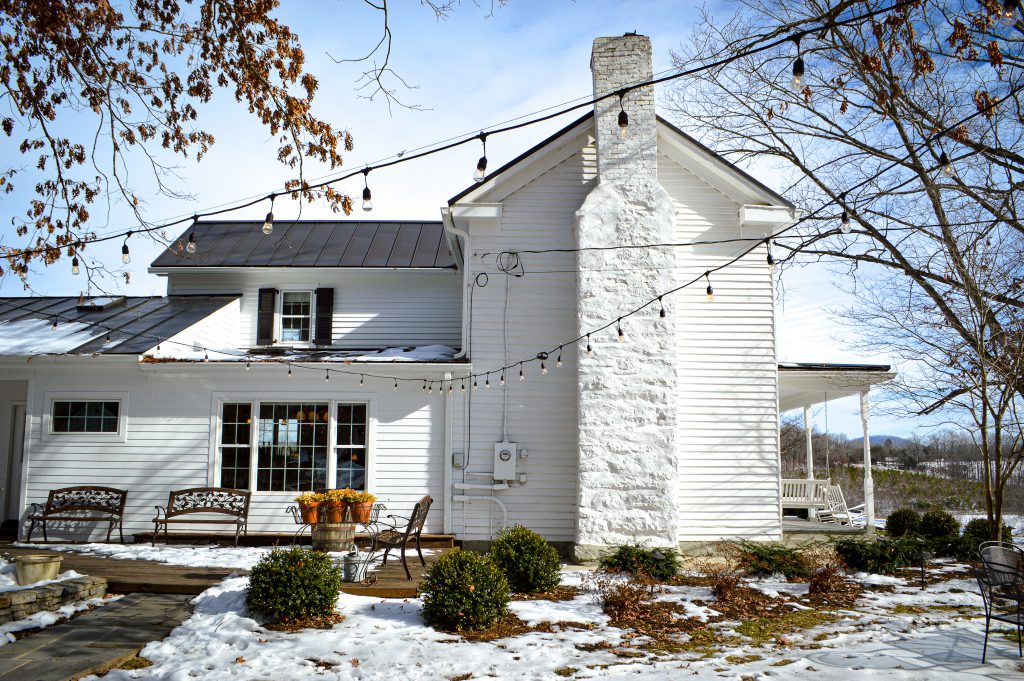 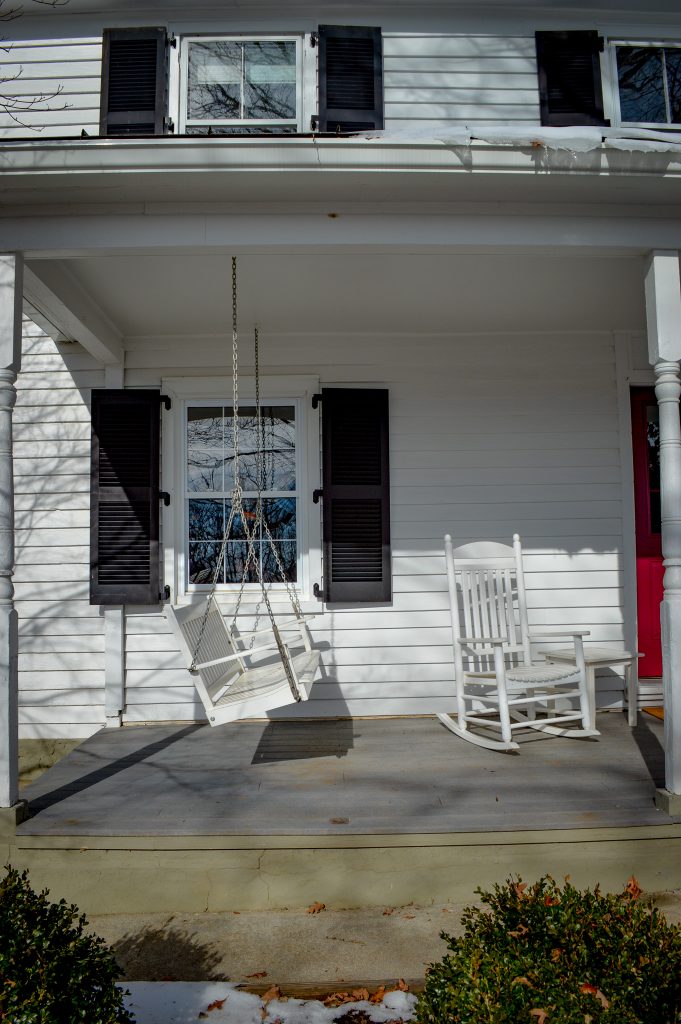 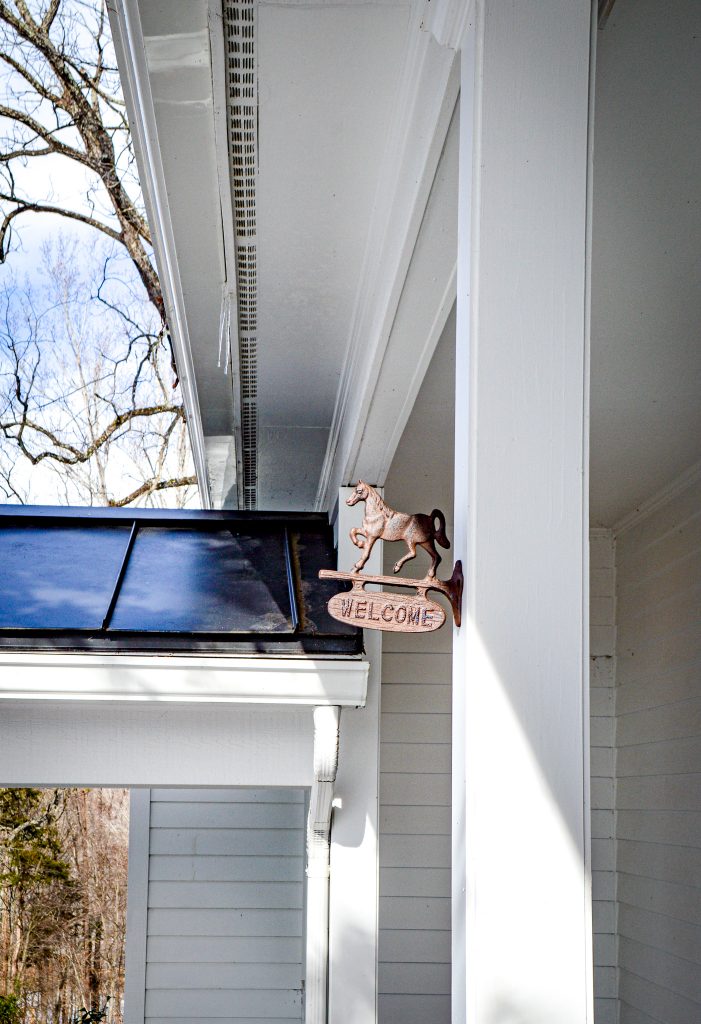 Inside: the Backwards Staircase

If you’ve been following this blog for a while, you know that my all time favorite old house feature is what I call a “backwards staircase.” (Prime example here.) When you walk into a farmhouse from the front door, 99% of the time you’ll see the front of a staircase that heads up. Every now and then, though, the staircase goes the other direction. I think it adds so much character. 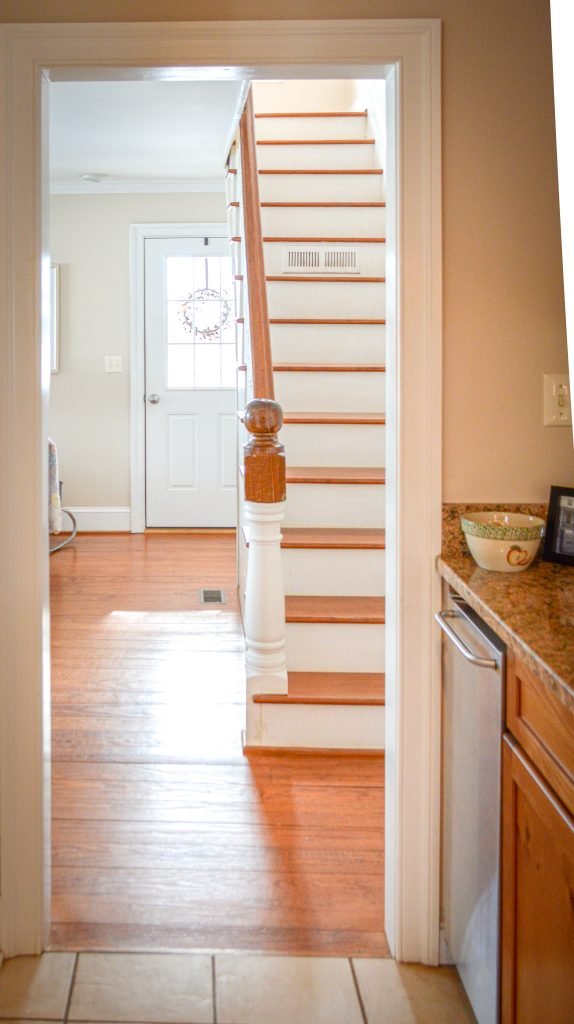 The living room area when you first enter the farmhouse is now part of the tasting room. The whole farmhouse, in fact, is now open to the public for tastings or available to rent as AirBnb rooms.

Apparently when the builder of the house, Josie’s husband John Stevens, passed away, this room is where his body was on display before his funeral. (And apparently his body was laid out for so long his beard needed to be shaved… twice!) Ever since then, folks have claimed John’s spirit lives on in the farmhouse. Tessa told me she hasn’t experienced any paranormal type activity, but– who doesn’t love a good ghost story, right? 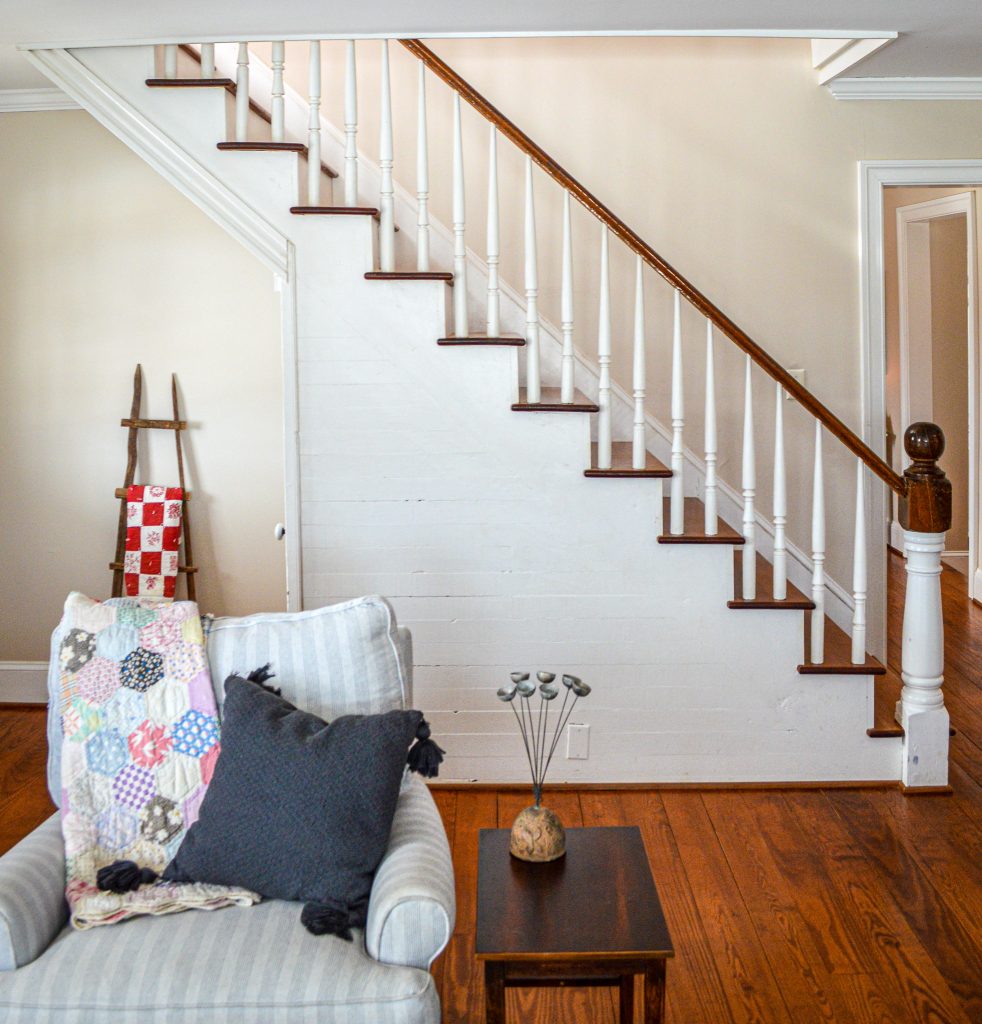 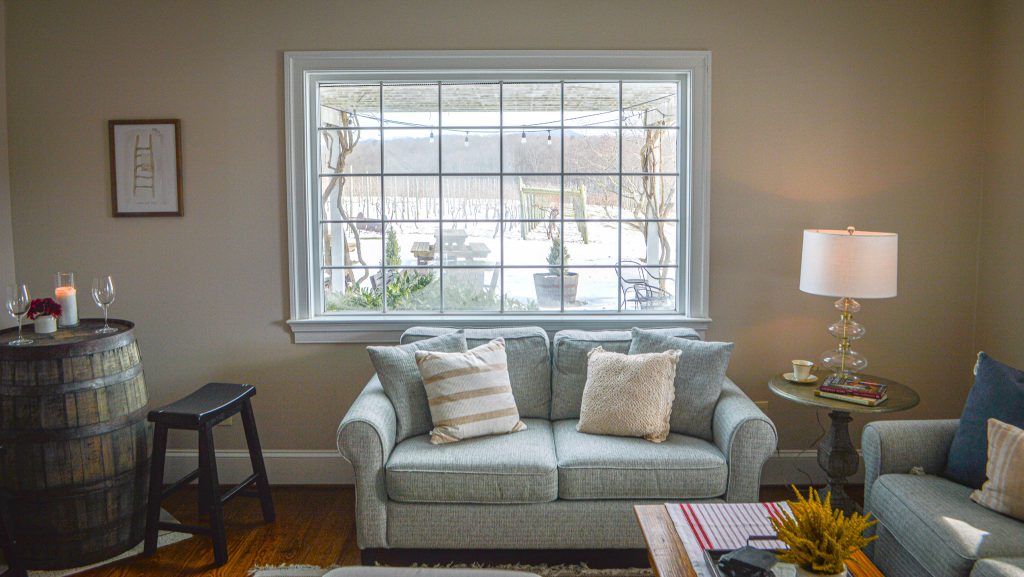 The Puckett family acquired the farm and turned it into a small vineyard in the 1990s. They produced their first vintage in 2005 and waited several years before opening to the public. In 2021 they sold it to the current owners, Bill and Shelley Riley, who now operate Lovingston Winery along with their daughters Tessa and Tara and Tessa’s fiancé Wes Roberts. The acclaimed winemaker, South African Riaan Rossouw, has done and continues to do phenomenal work.

When the Puckett family owned and operated Lovingston Winery, the tasting room was down the hill in a warehouse right next to a pond. It was a beautiful setting to be sure, but lacked the charm and warmth that the farmhouse oozes. When the Rileys purchased Lovingston, they moved the tasting room from the winemaking facility up to the farmhouse and the response has been overwhelmingly positive. As Tessa told me, “it is on nearly a daily basis that we have remarks about how it feels like home to so many. It is clear that farmhouses capture the hearts of many in Virginia.” 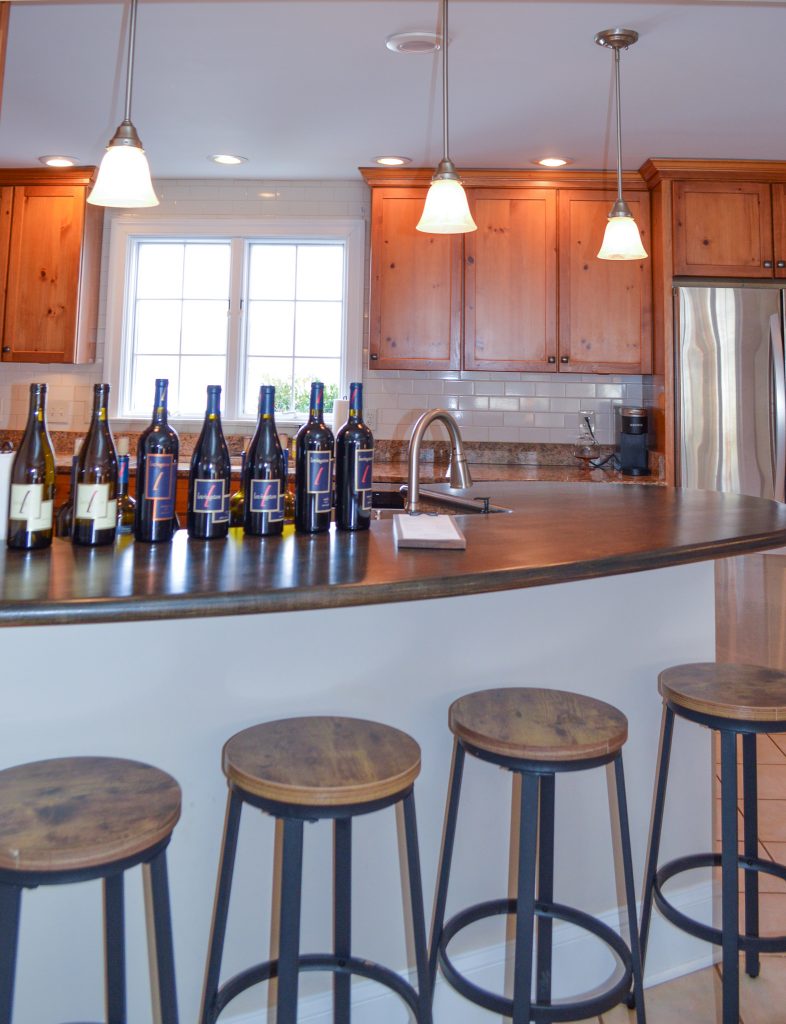 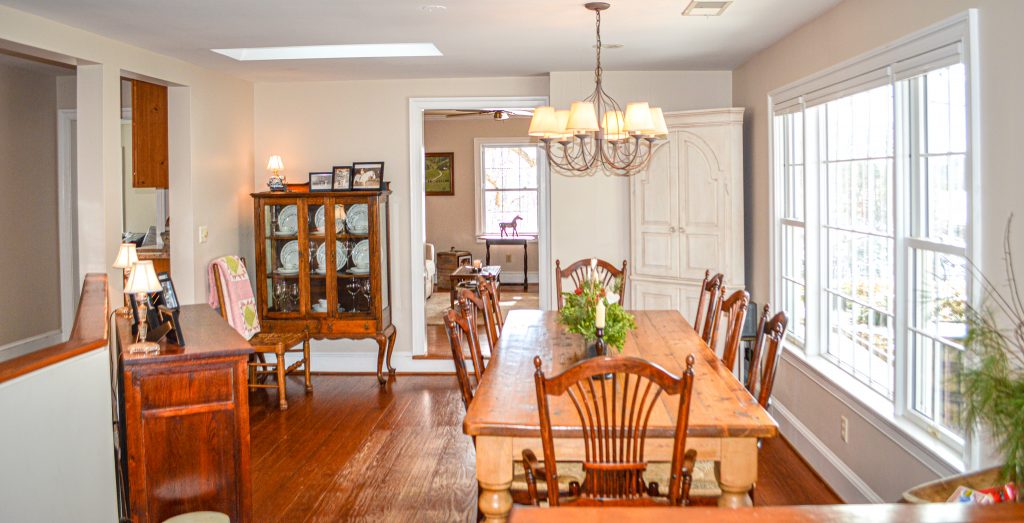 One of the more recent additions to the house, the sundrenched master bedroom in the back is absolutely beautiful. 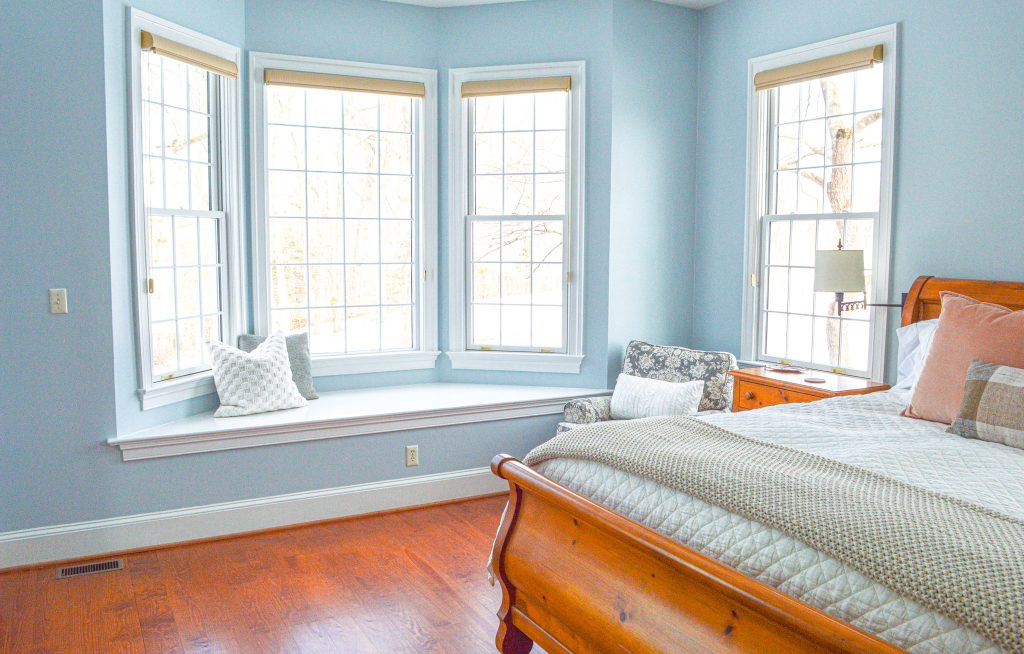 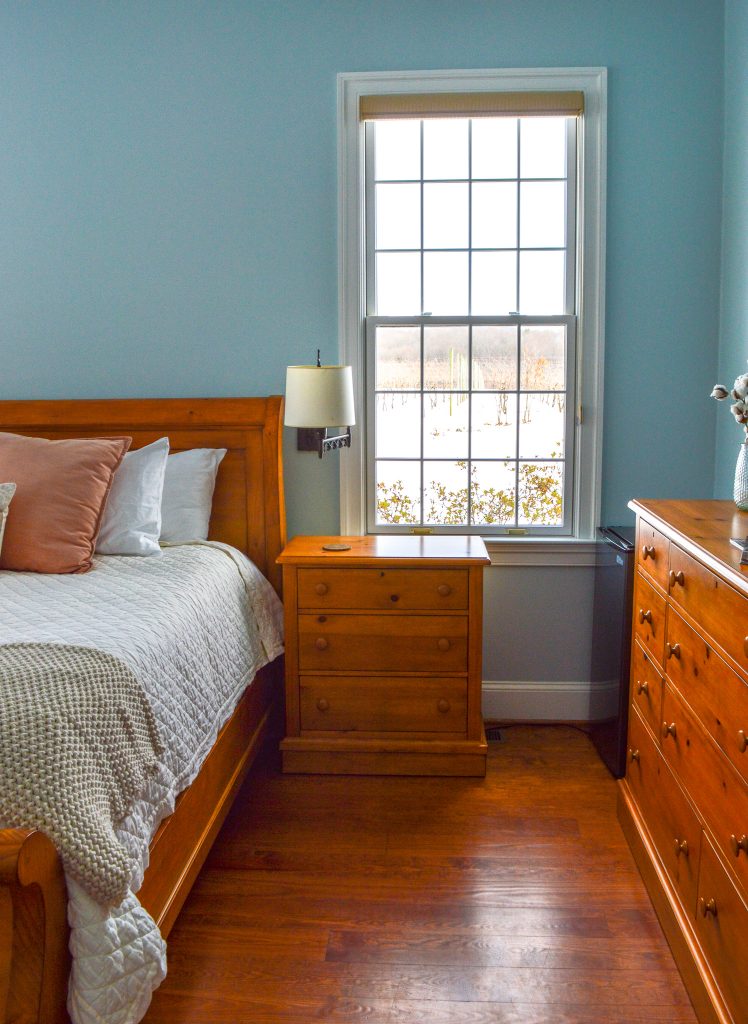 In the front of the house is a room originally called “Josie’s room.” 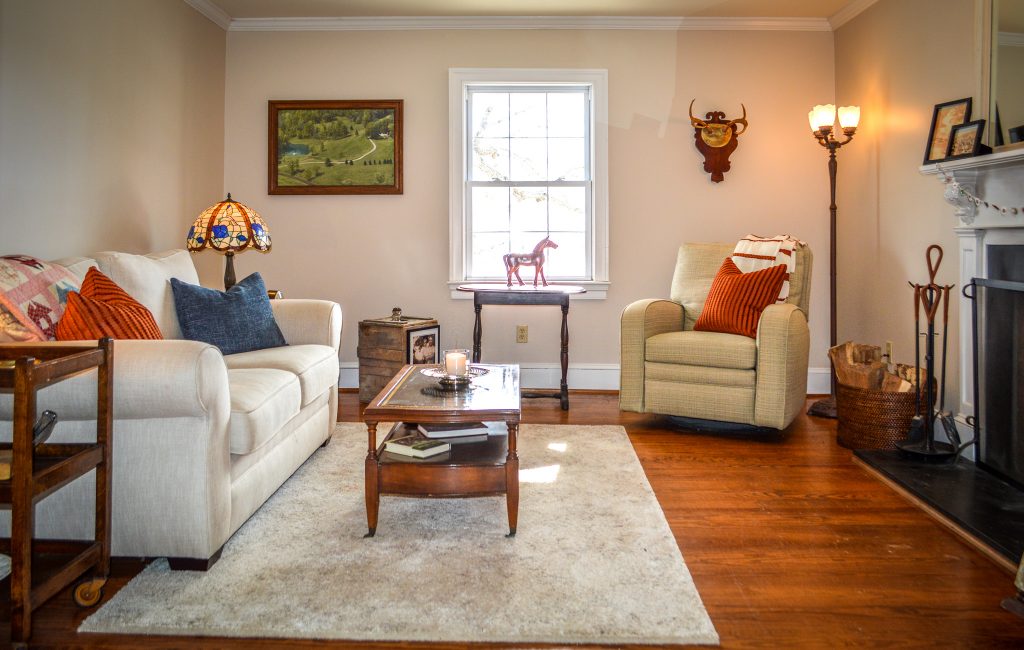 In display in this room is an aerial view of the property, probably taken around the 1950s and colored in. You can see the farmhouse on top of a hill overlooking a pond. It is indescribably peaceful. 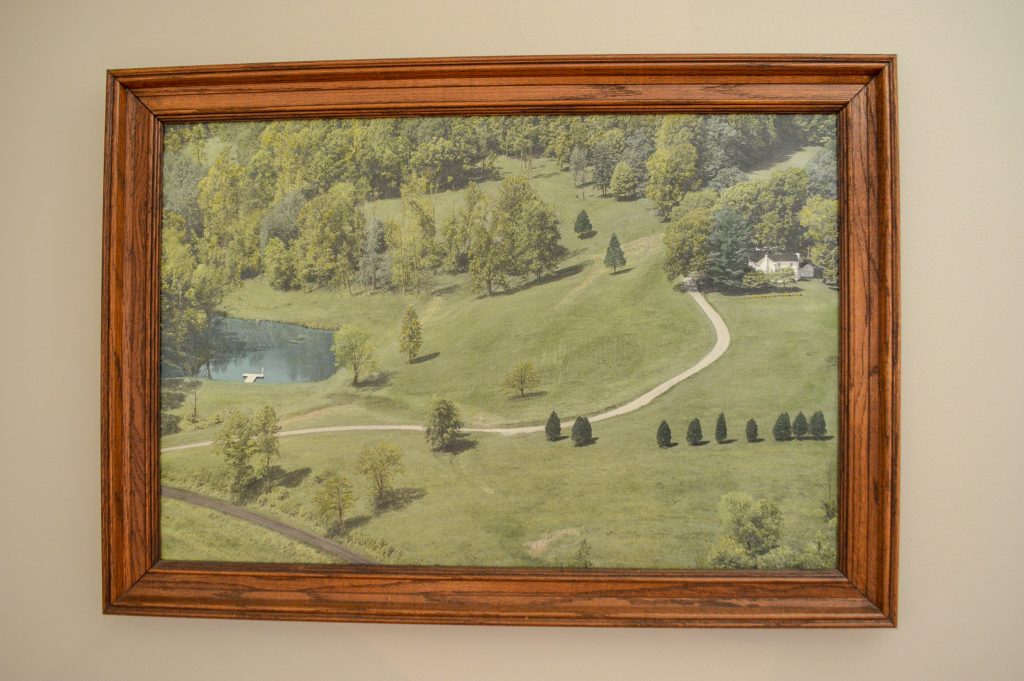 I also love this fireplace mantle. It’s simple and yet a bit of flair there with the corbel. It reminds me of a bunch of grapes. 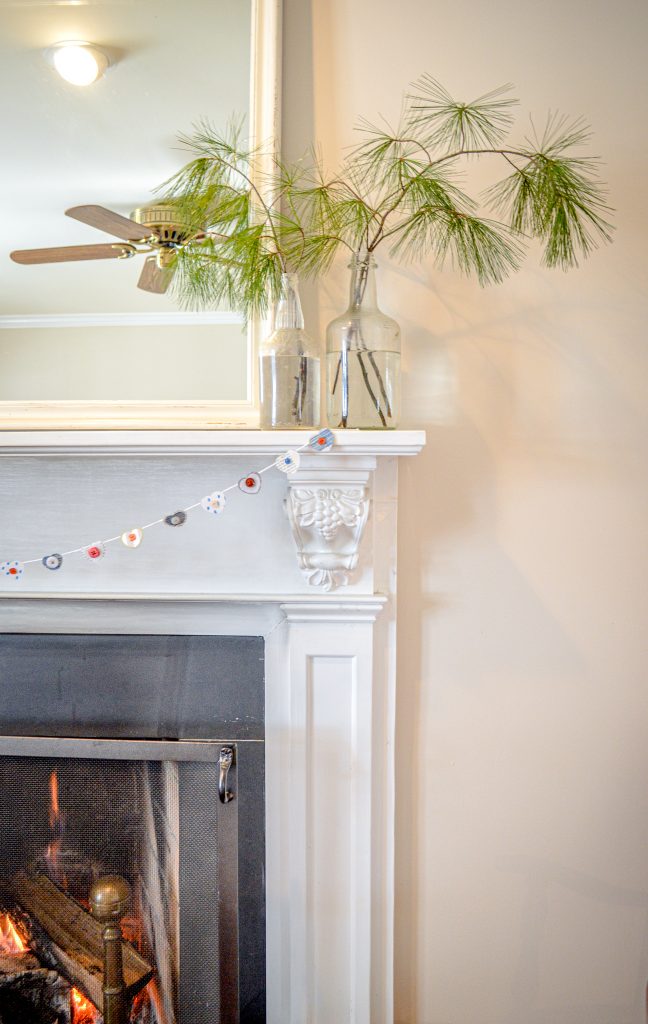 Up the Pine Stairs

The staircase is perfectly creaky and charming (and ridiculously sturdy, as all these old staircases seem to be!). 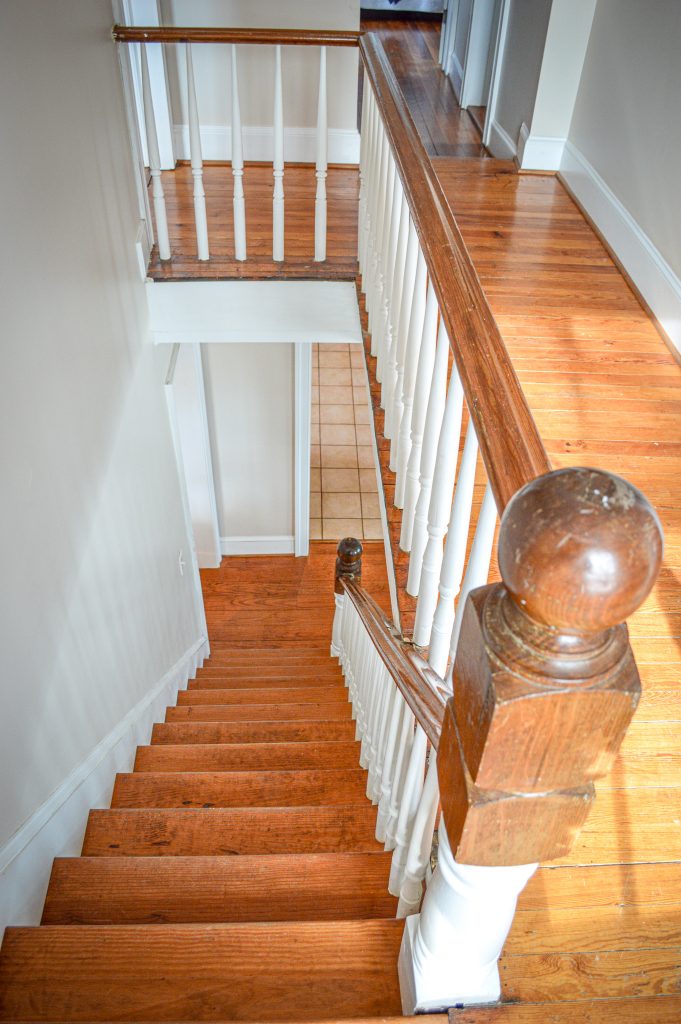 While walking up, this is the view you get of the floors in the hallway: 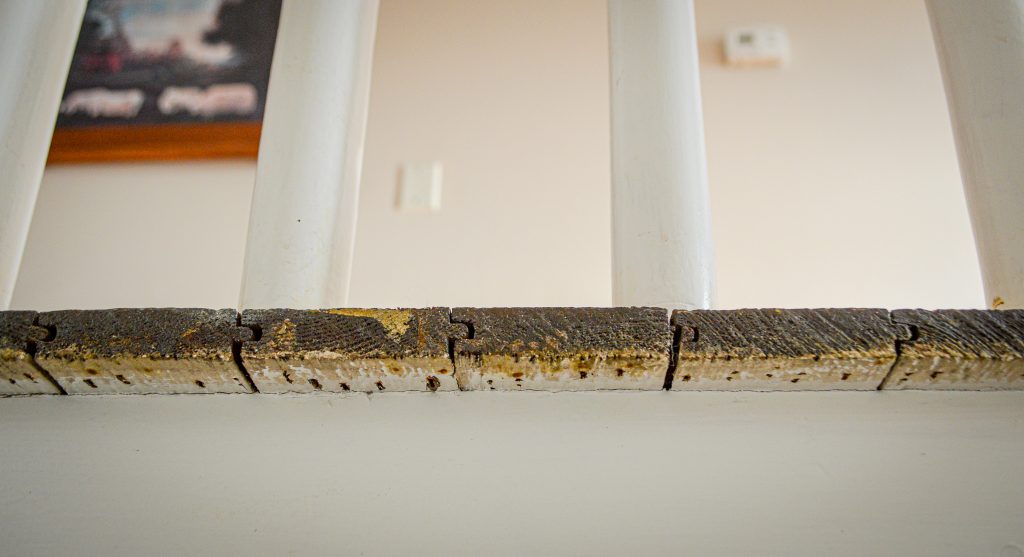 Isn’t it cool to see?

Tessa and her fiance’s friendly pup, Arnie, loves making himself at home throughout Lovingston Winery and upstairs is no exception. 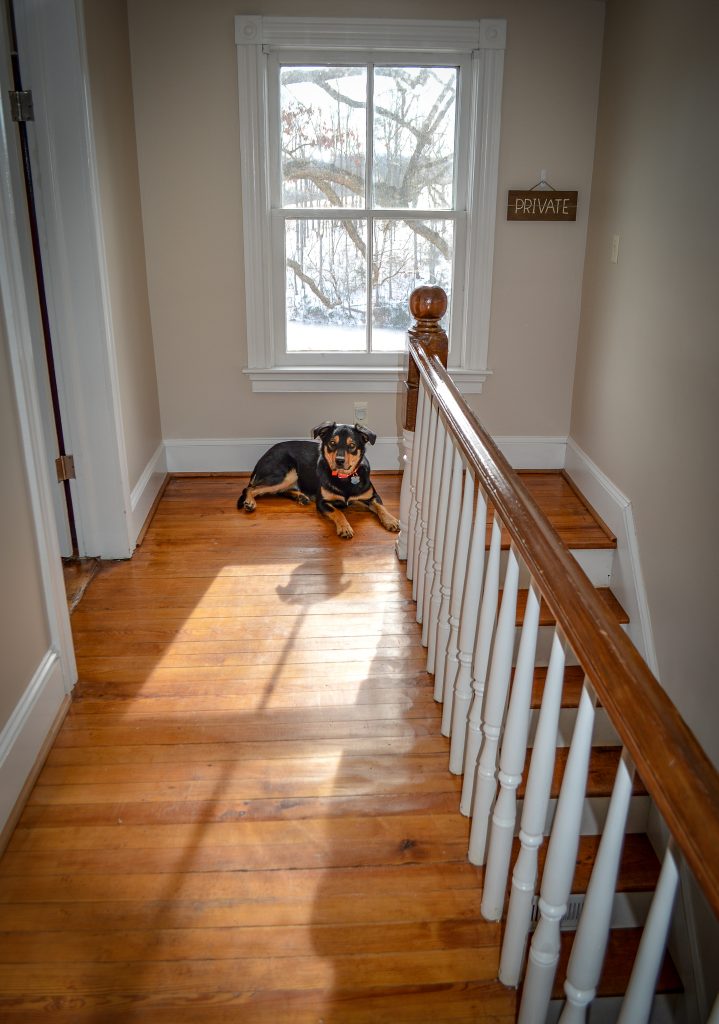 Upstairs are multiple beautiful bedrooms. Each is decorated in a simple farmhouse theme. 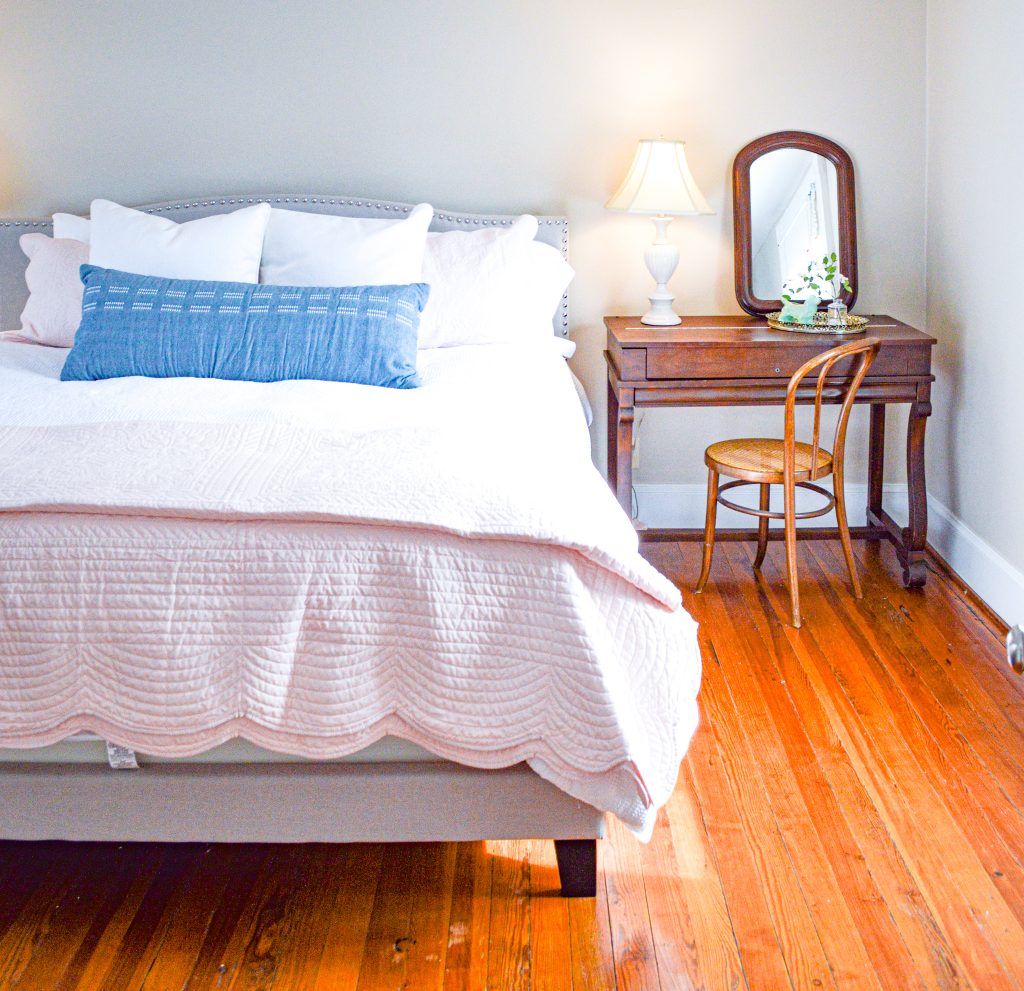 The floor is a gorgeous pine that shows some wear and tear, which of course I love because it adds a lot of character. 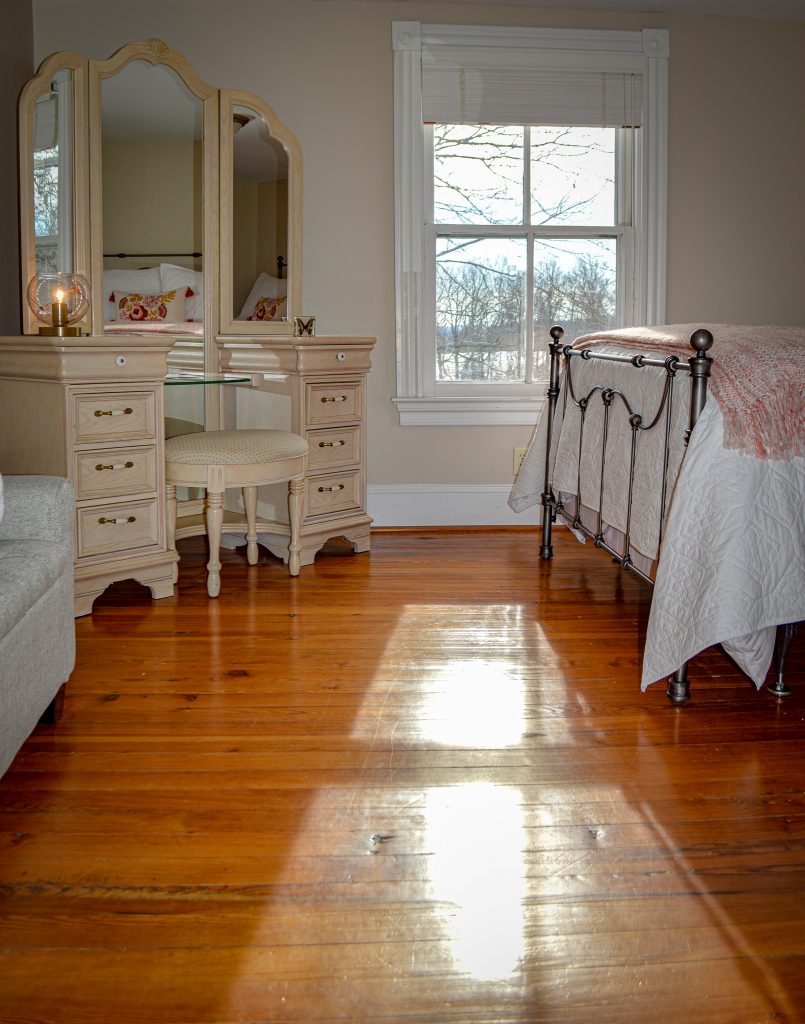 Aren’t those side-by-side beds so sweet? 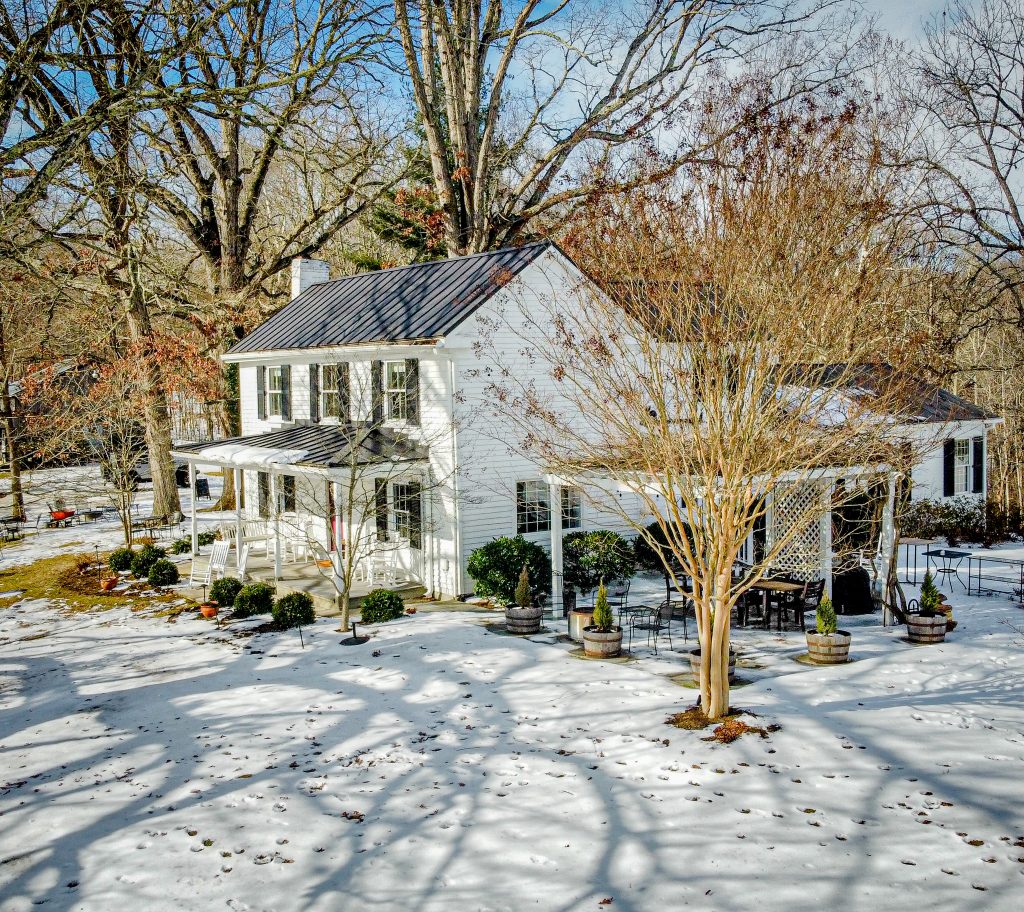 I’m so excited for the Riley family to continue to produce and share its amazing wine here. It is such a joy getting to watch this sweet farmhouse get a new life!

6 thoughts on “Lots to Love in Lovingston’s Farmhouse”