When you think about a Virginia farmhouse, there are certain things you expect to go with it.  In my mind, I expect a front porch, gravel road, a dog (or two, in our case!), big trees, some land… and a farm cat.  The purpose of a farm cat is– believe it or not– more than just to give a farmhouse its true farmhouse status.  A farm cat kills mice, which in turn give snakes no reason to stick around.  And apparently cats can kill snakes too!  Charlottesville supposedly has more than its fair share of copperhead snakes, and while I haven’t seen one at our place yet, I am not exactly itching to do so.

So David and I decided to preemptively strike against the snakes (and battle the mice we’ve already seen inside and out) and adopt a cat from the Charlottesville SPCA.  We drove over last week with friends of ours, who were coincidentally our references, and picked out a cat.  Her name was Anastasia at the shelter and she had been there since February 2013.  They think she got pregnant when she was very very young, which stunted her growth, so she probably will never get bigger than the 6 pounds she is now.  She’d been adopted once since February and returned shortly thereafter.  Thankfully, Charlottesville is a no-kill animal shelter, so it’s not like her days were numbered , but since we adopted her they have another spot to give a kitty somewhere that might otherwise be euthanized. 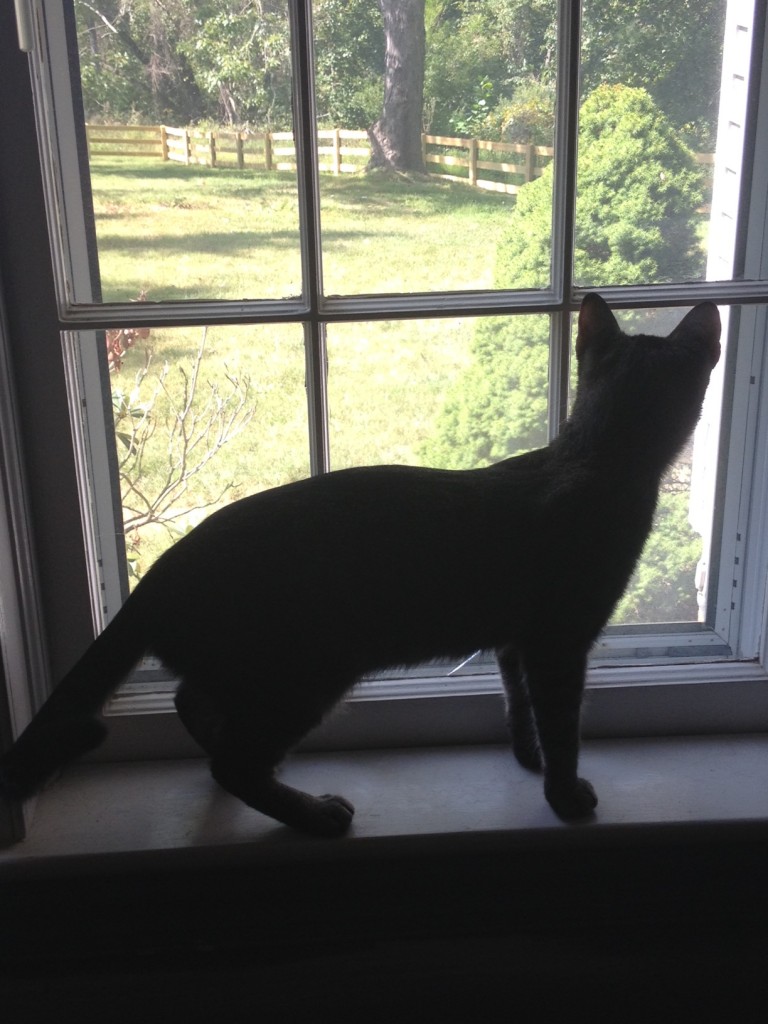 Even though we want an outdoor mice- and snake-hunting beast, we decided to adopt Anastasia and bring her home.  She’s so little… she seemed so helpless.  We promised the SPCA we would very slowly introduce her to the outdoors.  The first week she’s supposed to be sequestered to one room in the house, the second week she’ll meet the dogs and have full run of the house, and the third week we can slowly start taking her outside (supervised) while she returns go sleep inside every night.  After three weeks, though, we’re supposed to let her do her thing outside.  (This is assuming everything goes well.) 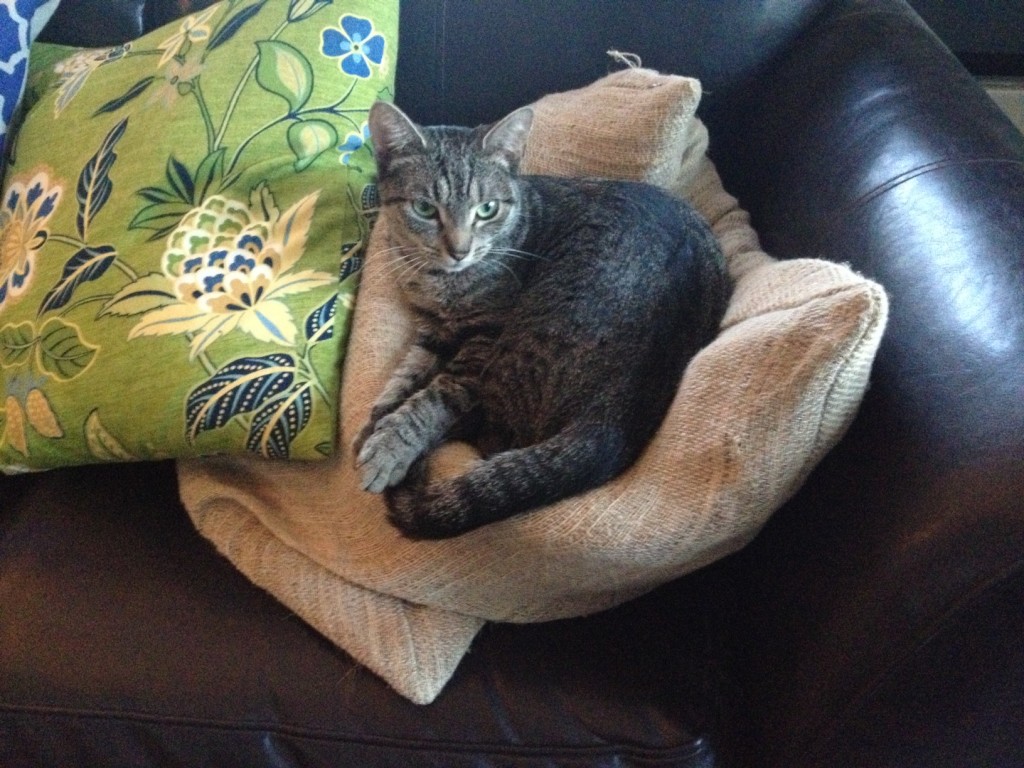 In the meantime, she’s growing on us.  Neither David or I are “cat people.”  I’m pretty allergic, for one thing.  But she’s actually pretty cute and fun to watch.  When we brought little Anastasia home we knew we wanted to give her a new name… something very Charlottesville-esque to us to symbolize our new life  in the countryside.  (If we stayed in the DC area, there is no way on earth we would have ever wanted to get a cat.  Oh how things change!)  We decided to name her Meriwether after Meriwether Lewis, of Lewis and Clark (the famous expedition team to explore the American continent).  Meriwether Lewis was born not too far away from our farmhouse, and this little kitty has already proven herself to be quite the explorer, so it seemed like a perfect fit! 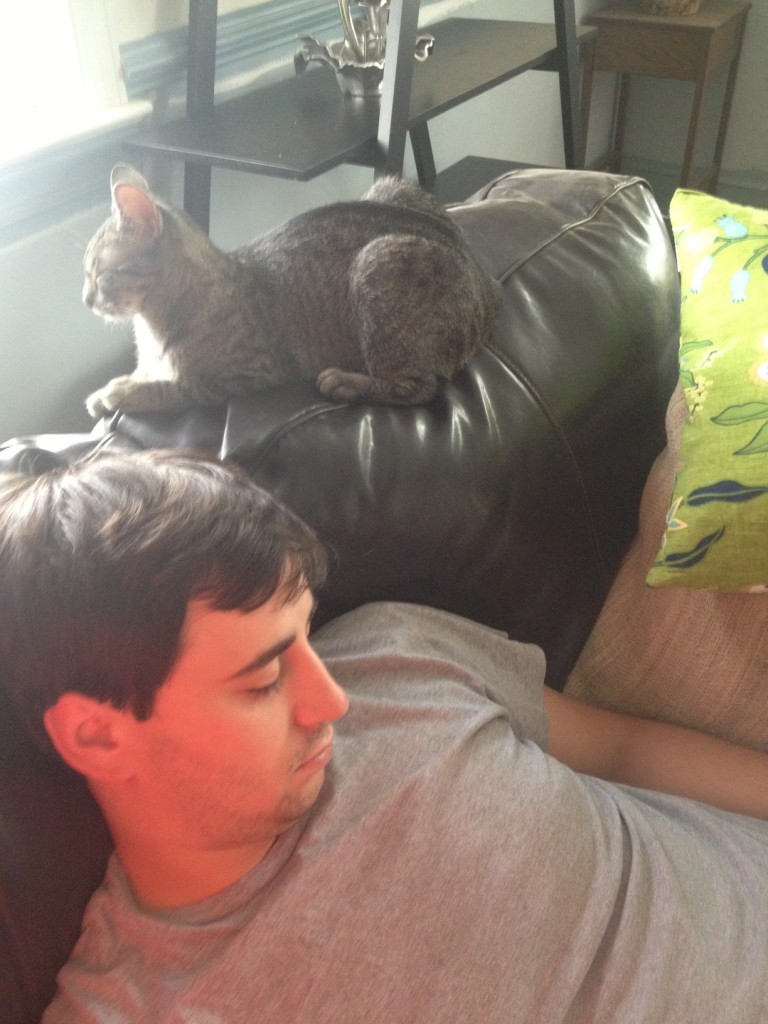 We’re excited to have little Meriwether in our life and hope her transition to an outdoor kitty cat goes well!  She’s already caught a little spider and a cricket in the living room.  While I’m sneezing a bunch being around her now, I think she’ll make a perfect farm cat and be another step closer toward making this house our home.