The ceiling in our upstairs hallway was never really what one would call “normal.” 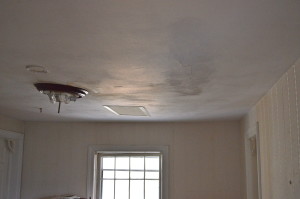 In fact, if I had to come up with a list of adjectives to describe said ceiling… I would come up with “old,” “disrepair,” “stained,” “discolored,” “cracked,” “peeling,” and flat out “damaged.” 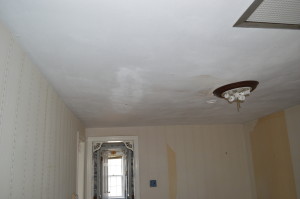 (In the above pic we had started removing the top layer of wallpaper from the walls.)

See, not only did the old roof leak but the air conditioning unit, which sat in the attic, also leaked.  It apparently caused water damage before we moved in. 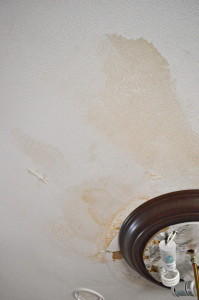 We knew at some point we were going to replace the ceiling because before we were allowed to move in, the electricity was not up to code and the county had to come inspect after our electrician poured many, many hours into making the house not a fire hazard… and during those hours, he discovered how unsafe the wiring was in the hallway ceiling due to water damage.  Plus at our home inspection the ceiling made beep sounds when they had a little monitor to test for water damage. 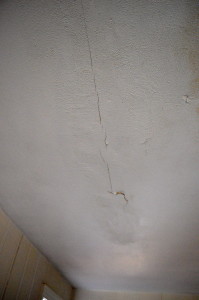 Over the past few months, we had kind of forgotten about the ceiling when our contractor was over working on another project… he noticed that in the time he’s worked in the house, the ceiling has gotten worse. 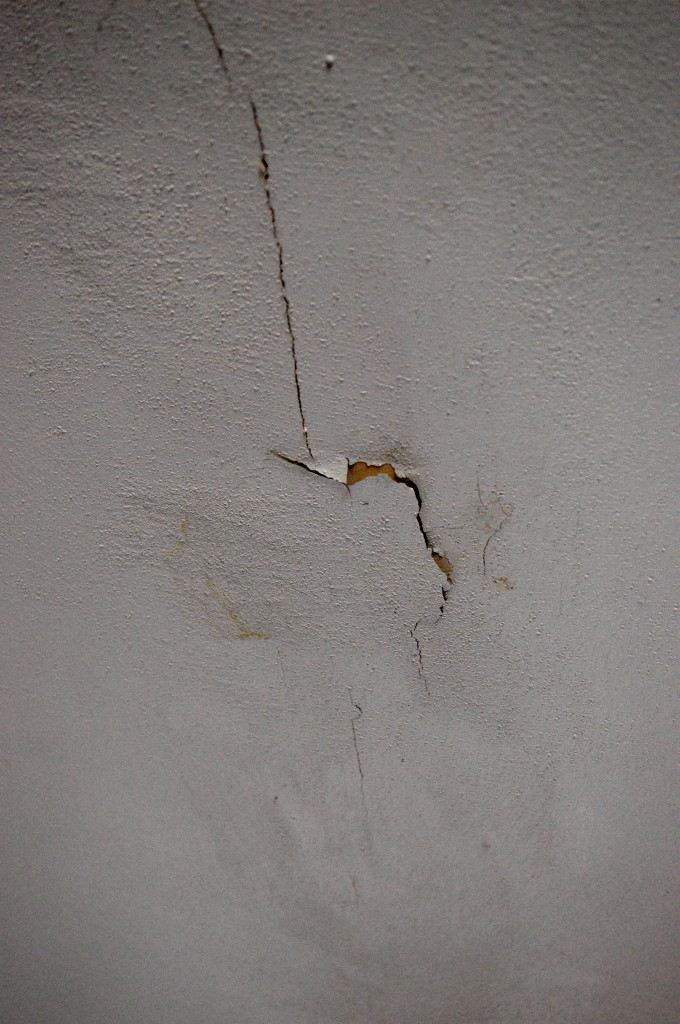 So, as tends to be the case around here, another unbudgeted-for project began. 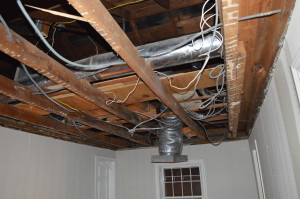 The contractors began by removing the old ceiling.  It wasn’t as simple as that– first they removed drywall and then they had to remove the rotting plaster underneath that!  What was left: the attic joists, electrical wires, and the air conditioning system. 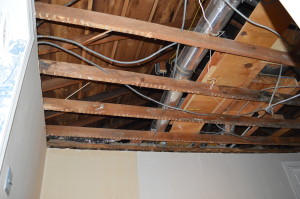 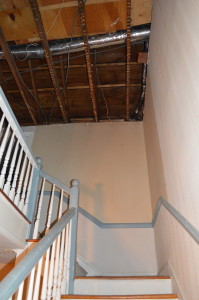 (Keep in mind, this is NOT a dust-free process we’re dealing with.)

Well, after the attic joists were exposed, we realized they were also rotten.  (Not all of them, but many.)  That meant another unexpected expense– replacing the joists! 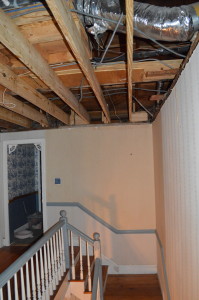 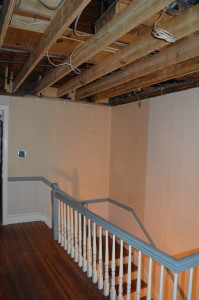 (Never thought I’d think attic joists were pretty, but these sure are, aren’t they?)

Next step: adding insulation between the beams and installing sheetrock.  It was the day this was scheduled to happen– last week– when I suddenly realized we had no attic stairs and while the ceiling was all down anyway, we should install some attic stairs.  Thankfully our contractor was flexible and figured out a good place to stick some in. 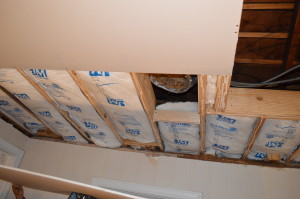 Here are two men in our contractor’s crew working on installing the sheetrock. 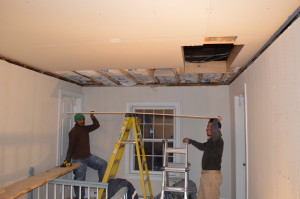 The ceiling with sheetrock: 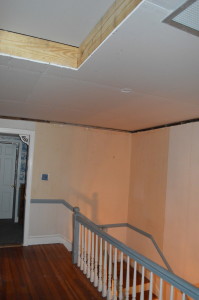 In the photo below, notice the gap between the wall and the ceiling and the plain ol’ sheetrock… 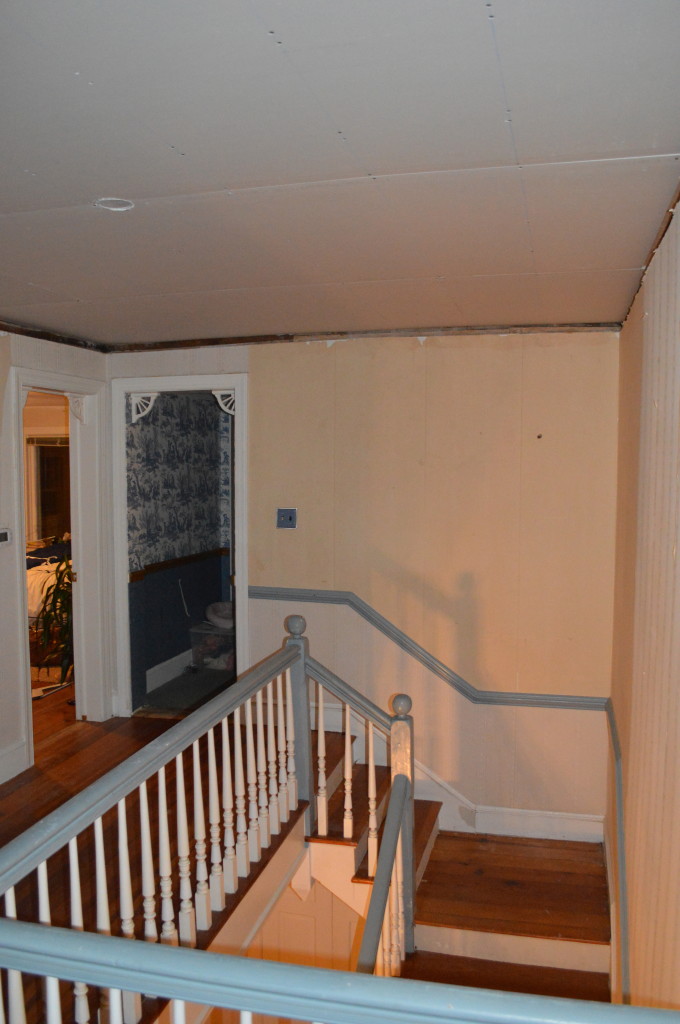 Anyway, here is the ceiling again after they started patching the sheetrock: 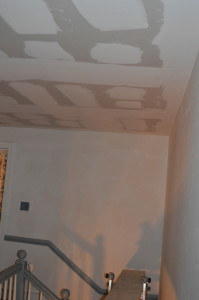 The contractors were really smart in how they were able to access the ceiling above the stairs: 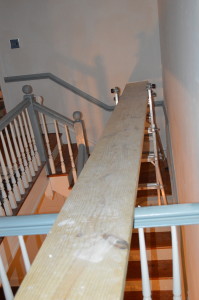 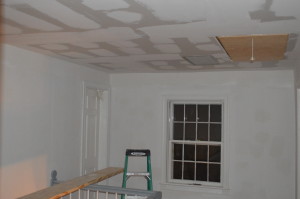 And the attic steps! 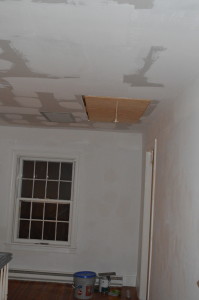 Then they primed the ceiling for us– which was probably something David and I could’ve done ourselves but honestly such a relief that we didn’t have to. 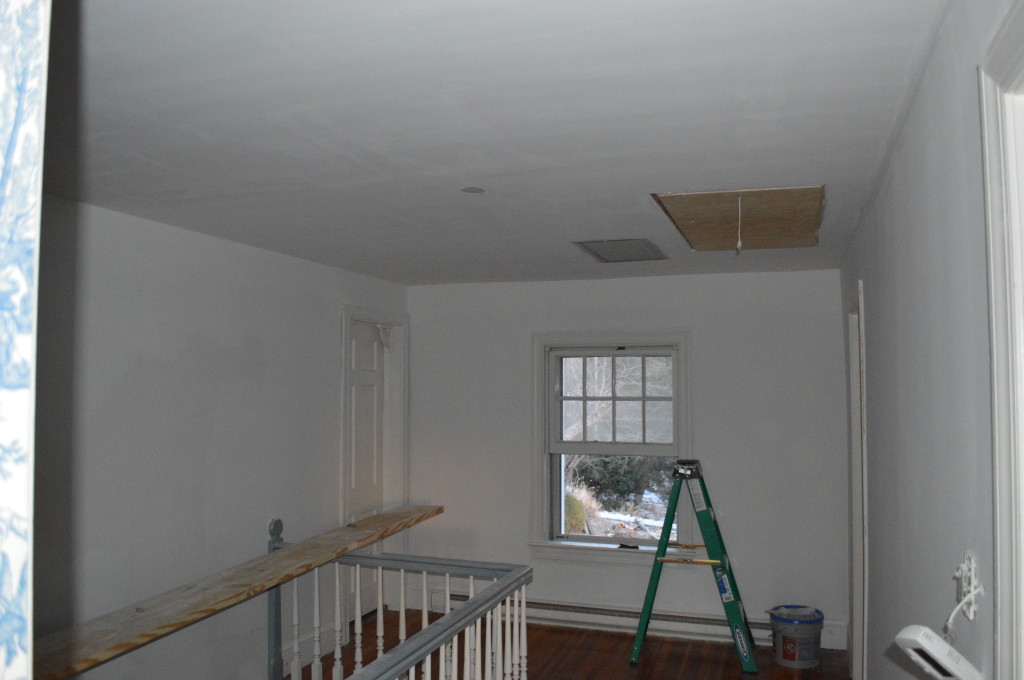 How SWEET is that ceiling?!?!

2 thoughts on “Only Boring People Have Dependable Ceilings”