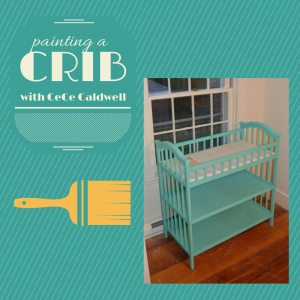 Today I’ll share some more progress with getting the nursery ready and in particular with our crib!  After some wonderful Craigslist finds for our changing table ($20!) and a bookshelf ($50– solid wood!), my mom and I got to work on painting all three pieces for the nursery in CeCe Caldwell’s Sante Fe Turquoise. 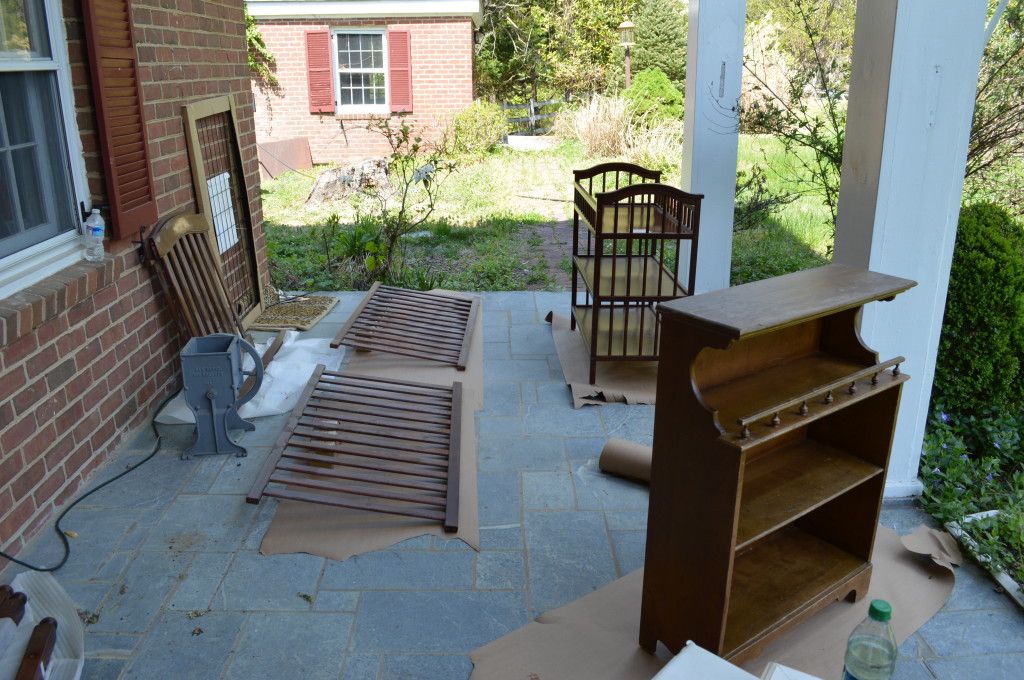 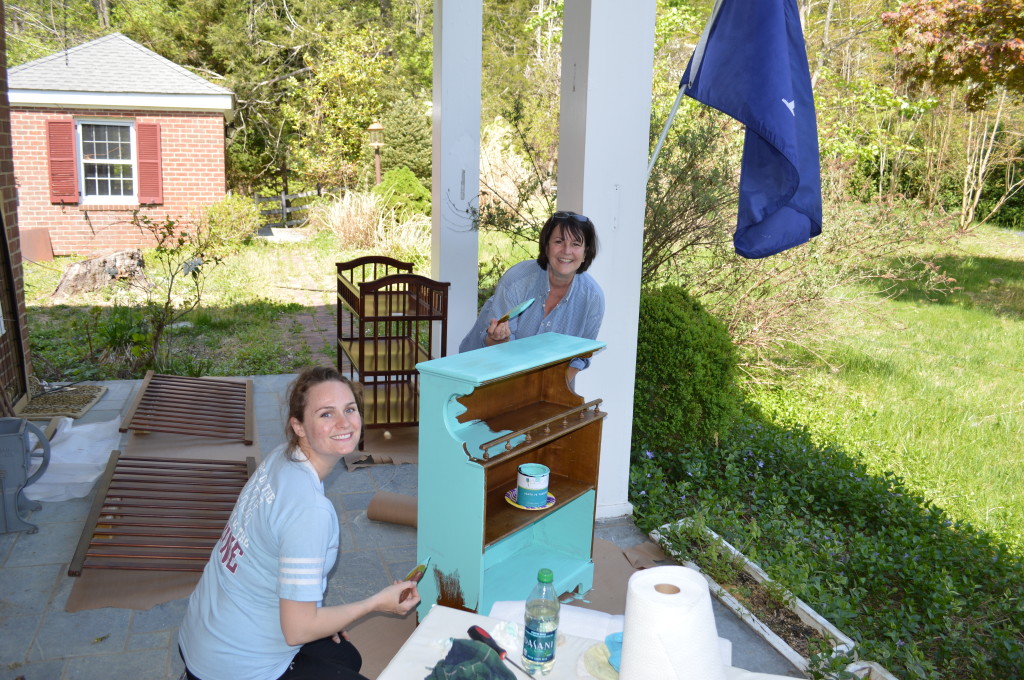 We started with the bookshelf and were pleased by how easily CeCe Caldwell covered the brown wood.  We didn’t do any prep at all other than a light dusting. 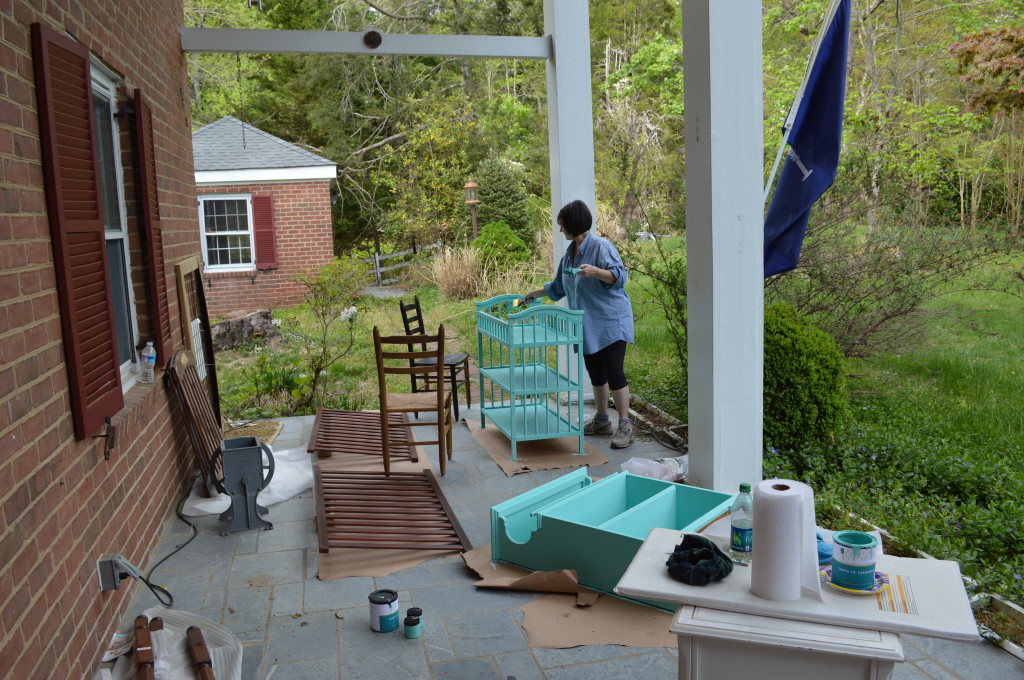 We let the first coat dry for about 4 hours, although honestly it was dry in probably 45 minutes.  Compared to the Annie Sloan Chalk Paint my mom is accustomed to, CeCe Caldwell was much thicker (it’s clay based, not chalk) and dried much faster. 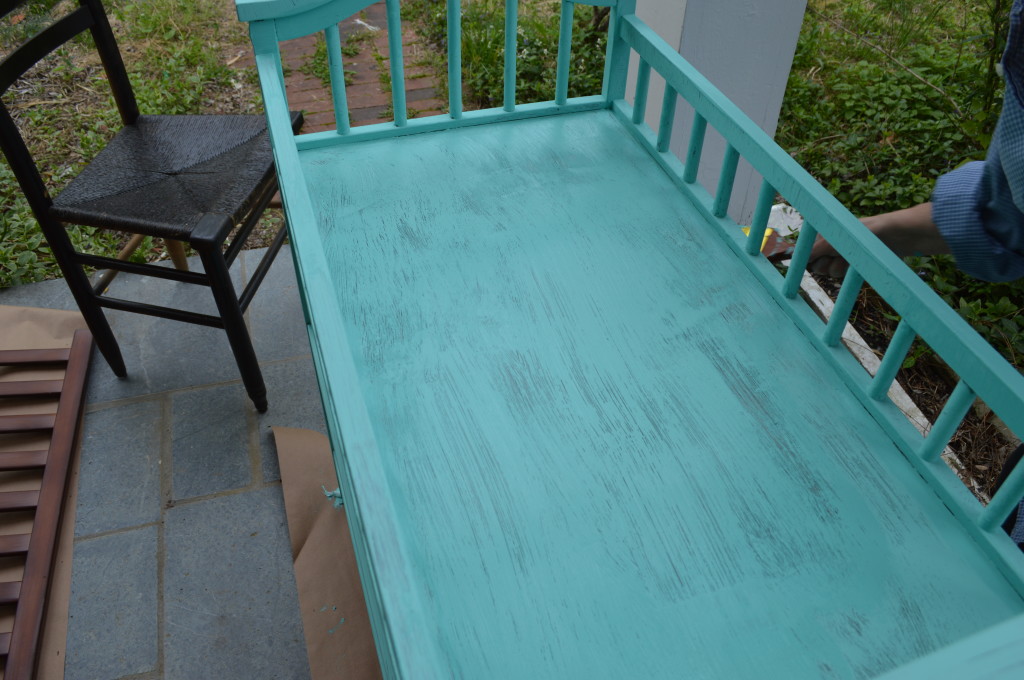 The changing table was really difficult because the shelves were shiny plastic.  The first coat did an okay job adhering but it dried looking really weird.  (Thankfully the second coat covered everything up just fine!) 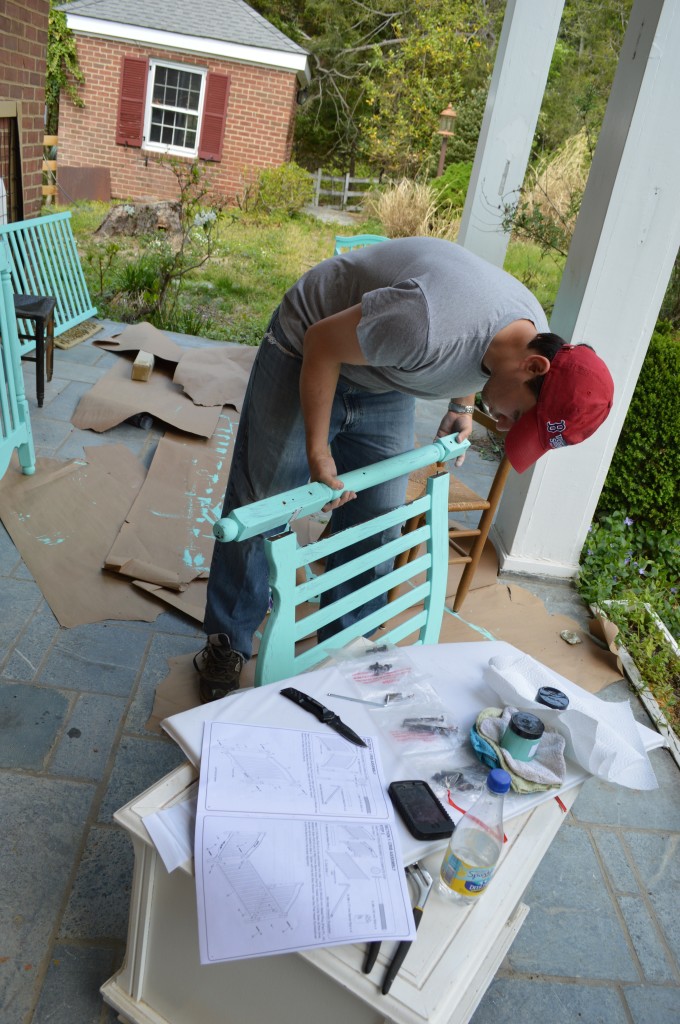 After we were done with the first coat on the crib, David assembled most of it so we could see what really needed touch-ups or what we should focus on for the second coat.  After the second coat we let everything sit for two weeks and then my mom came back and waxed EVERYTHING by herself using CeCe Caldwell’s Clear Wax. 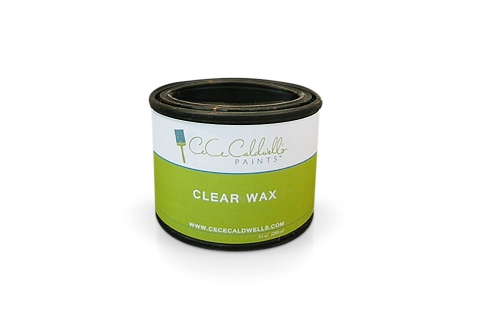 I really like this wax (even though I didn’t really practice using it much, thanks to my mom’s awesome work ethic and insistence on nap time for me) because it’s made from insect/ plant sources and has no odor whatsoever.

Anyway, she followed the instructions for the wax from the website:

“Clear Wax should be applied in a thin, even coat with a flat bottom brush or lint-free cloth. Apply sparingly. Always use less wax than you think is needed. It is best to apply several thin layers than one heavy layer. Wipe away excess. The surface should then be thoroughly buffed with a dry cloth, piece of brown kraft paper or finishing pad after 2-4 hours. For an even hard finish, the wax can be rebuffed 2-4 days after the initial buffing. This product requires several weeks to fully cure. Freshly waxed surfaces should be kept free of moisture and heavy use for about a week or so.”

We worked in an abnormal order because normally you would paint everything then wax it.  Instead, we painted most of it, waxed what we painted, assembled the rest of the crib in the nursery (because it’s too wide to fit through the door once it’s fully assembled!), painted the four posts, and then waxed the four posts. 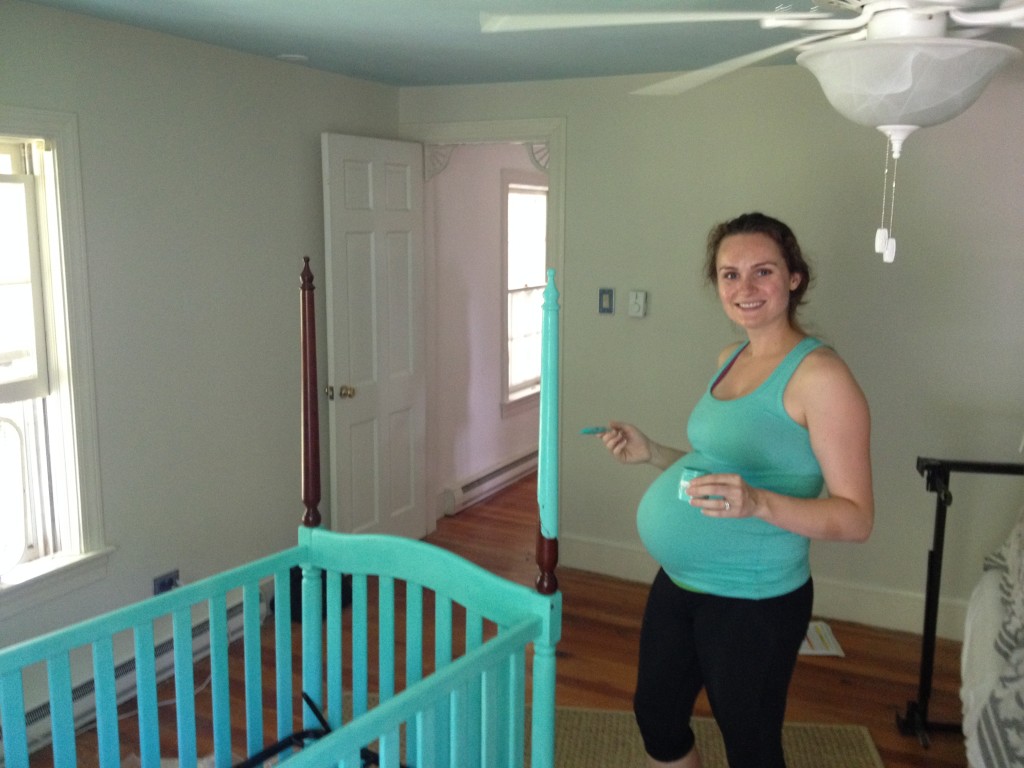 The above pic is a few weeks old now but yes, I am very pregnant in it!

The nursery still isn’t complete by any standards but things are starting to come together now!!! 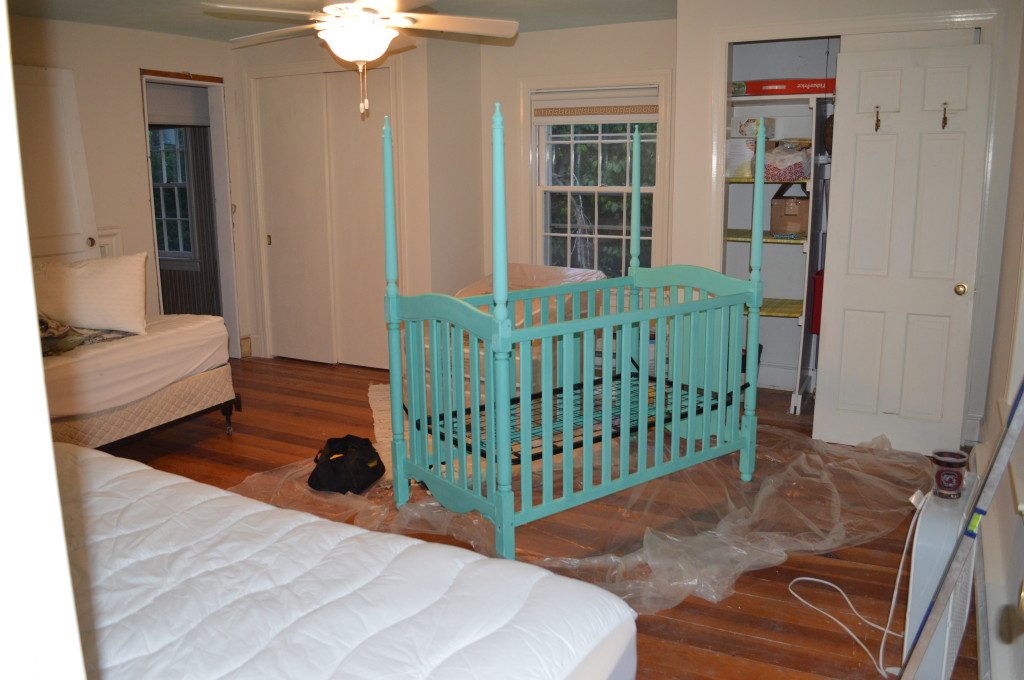 Above you can see the crib with painted posts (no wax yet).  The wax definitely deepened the color a little bit. 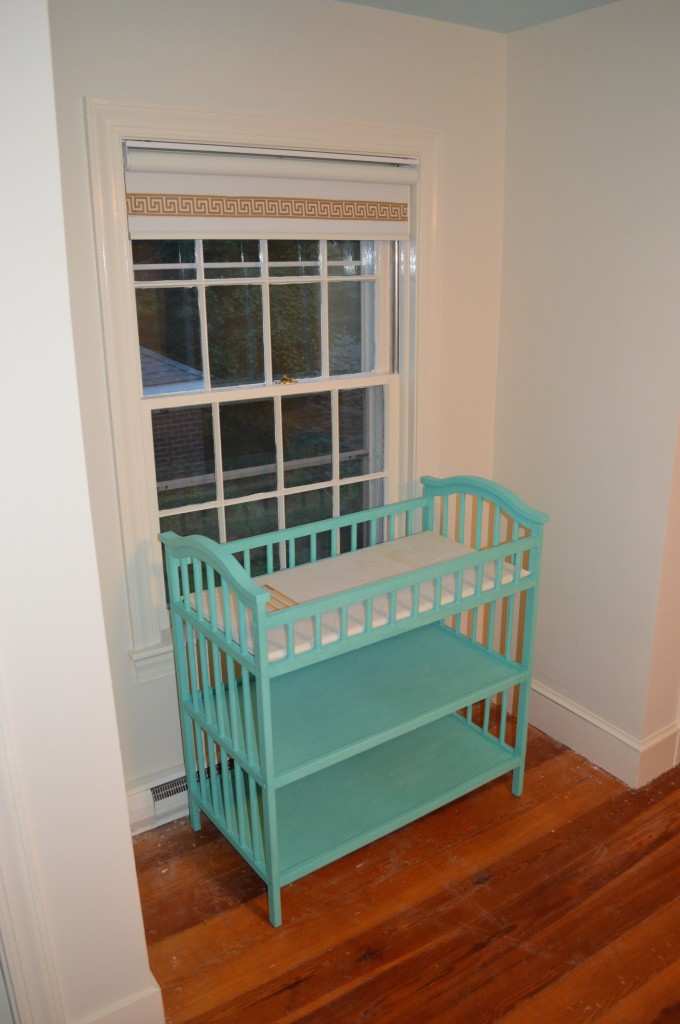 Changing table in the little nook between closets!

Starting to figure out where to put all the furniture… as if my mom’s gift of painting and waxing wasn’t enough, she and her husband gave us a lovely glider and ottoman for the nursery too!  Getting so excited for everything!!!!!!