We’ve been making progress in the nursery and I’m so excited to share with you! 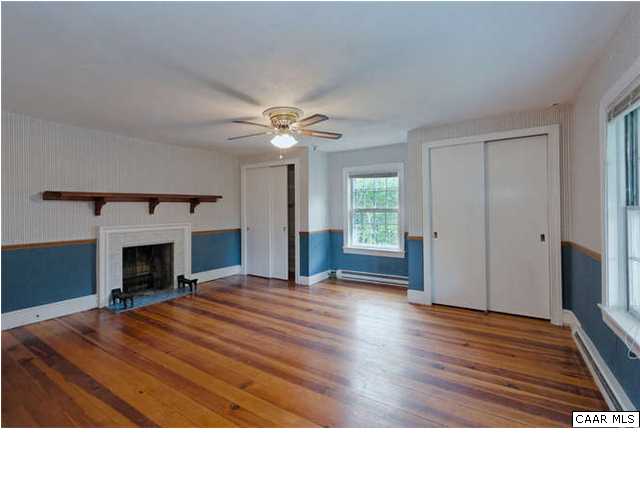 Above is the guest bedroom we decided to convert to the baby’s room.  It’s the bedroom furthest from the master bedroom.  The only changes we made to it when we moved in was replacing the ceiling fan with one that didn’t have terrifyingly bad wiring and taking down the heavy wood shelf above the fireplace because it was loose and almost fell off on its own.  Originally, we were going to make the bedroom adjacent to the master bedroom the nursery, but then we decided to remodel the master bathroom and make it into a guest bathroom and figured that guests would get more use out of a bathroom than a baby will in the first two-ish years or so (aka guests are always welcome!  Particularly those who come and help us do stuff!).

My father-in-law came up from South Carolina for a weekend a little over a month ago and helped us with a task that’s become all too familiar yet always daunting: removing wallpaper.  In one weekend he took down all the wallpaper from the future nursery– talk about impressive!!

I seem to have lost the “after” photos of the nursery sans wallpaper, but unfortunately in taking the wallpaper off the wall, the drywall itself got a little damaged.  The top layer came off with the wallpaper… talk about a pain in the rear… and we had been procrastinating about what to do next with the damaged walls.  One contractor we asked advice from insisted we had to re-drywall all of the walls.  Another said he could plaster over the damaged part but not until July.  We were researching how to do it ourselves but with 160+ year old walls, it seemed daunting to say the least.

Then my little brother came for a weekend and primed the ceiling of the future nursery while he was here.  (That turned out to be a wonderful mistake— David accidentally gave him a can of primer instead of ceiling paint and at first we felt bad he used the wrong stuff on the ceiling.  But, thanks to my creative sister-in-law’s idea, I decided I wanted to paint the ceiling turquoisey-blue anyway, so it worked out really well!)

THEN– yes there’s more!– my mom and stepfather came for another two days and brought their contractor from Locust Grove, Virginia with them, who not only plastered over the damaged part of the walls but also painted the ceiling in ONE day! 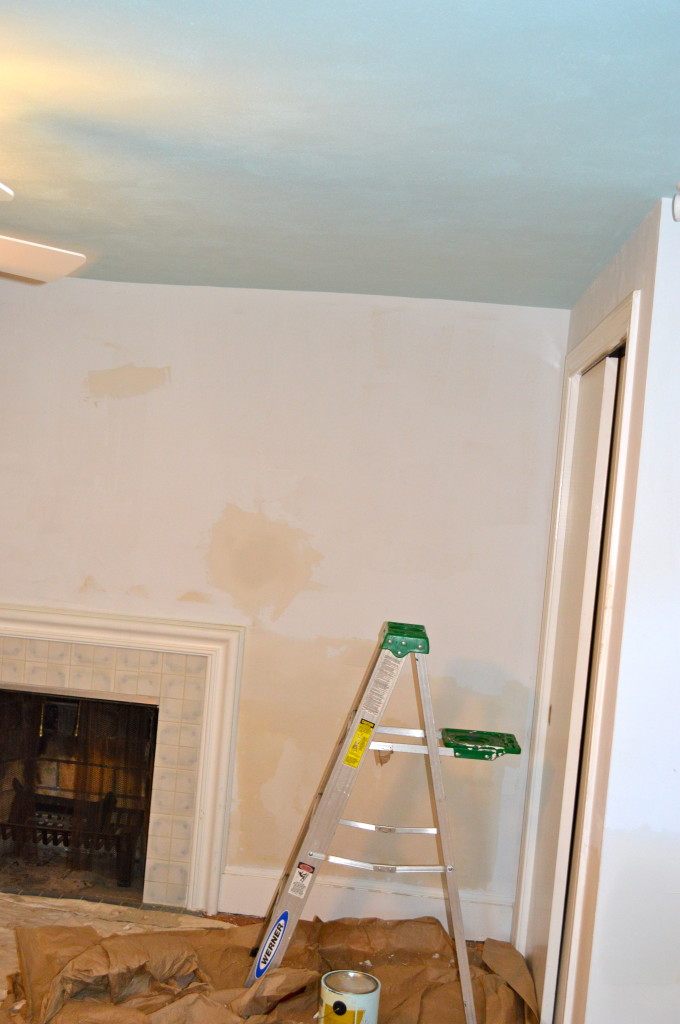 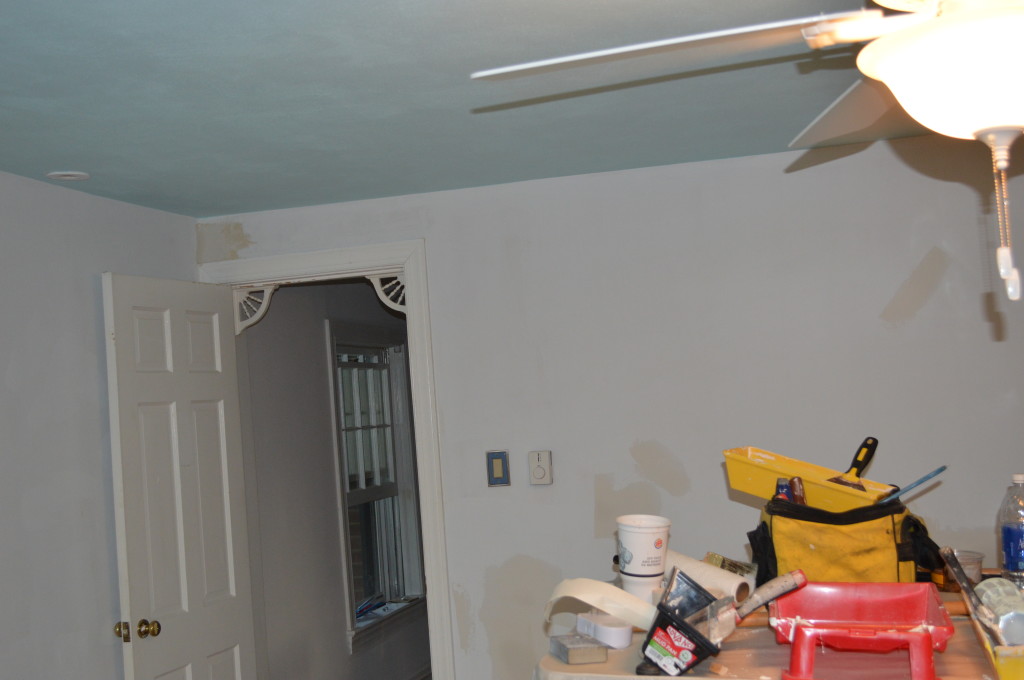 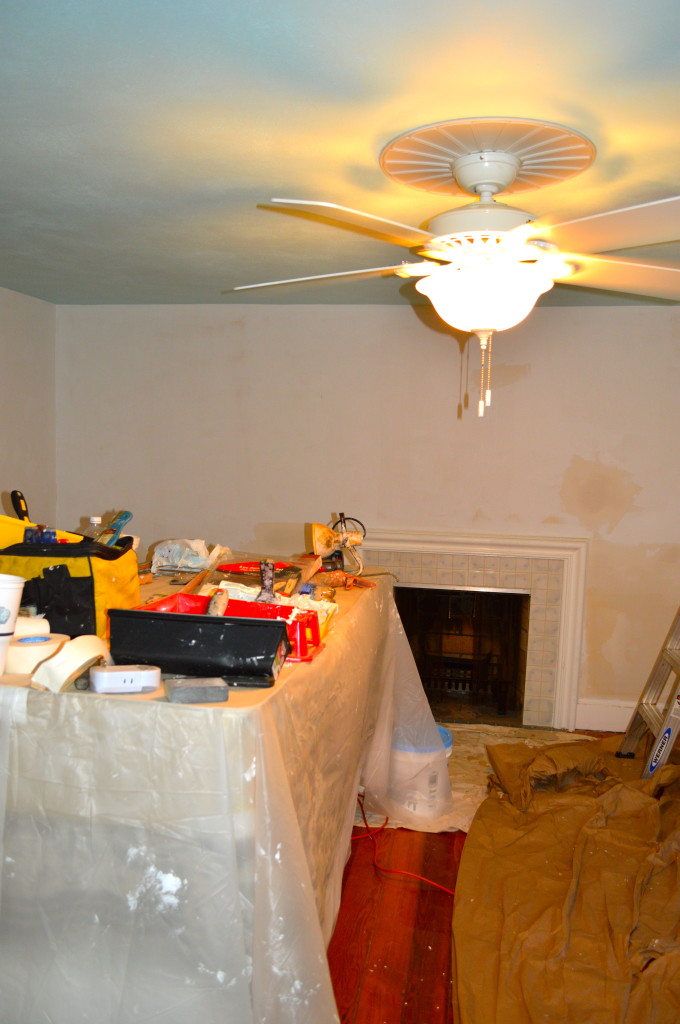 We chose to paint the nursery with Mythic Paint, a brand that is non-toxic, no VOCs, barely any odor, yadda yadda yadda.  We have used Benjamin Moore in the kitchen, Farrow & Ball in the bathrooms, and now Mythic for the nursery– I feel like I’m becoming quite the paint connoisseur!  Mythic seemed like a no-brainer for a nursery because it is just so safe with regard to the chemicals used.

I was at work when my mom and stepfather and contractors were at our house and got a call saying they had time to paint the ceiling while they were there– total (and welcome!) surprise.  I hadn’t picked out a turquoisey-blue yet so I hopped onto Mythic’s website and just randomly chose what I thought was a pretty shade: Watery Blue.

I like Watery Blue for a ceiling because it’s not a bright or startling shade.  You see it but your eye isn’t drawn to it instantly.  I think/ hope it will look really good with the rest of the plans we have for the nursery!

By the time I got home from work, the ceiling was already painted!!  Incredible.  After months of dealing with contractors not showing up (and generally feeling exhausted/ overwhelmed with everything that had to get done before the baby comes in August), I just started crying when I saw the nursery.

David and I are so grateful for the help of our amazing family in getting to this point.  It’s not done yet but the bulk of the work has been completed and it just feels so, so good. 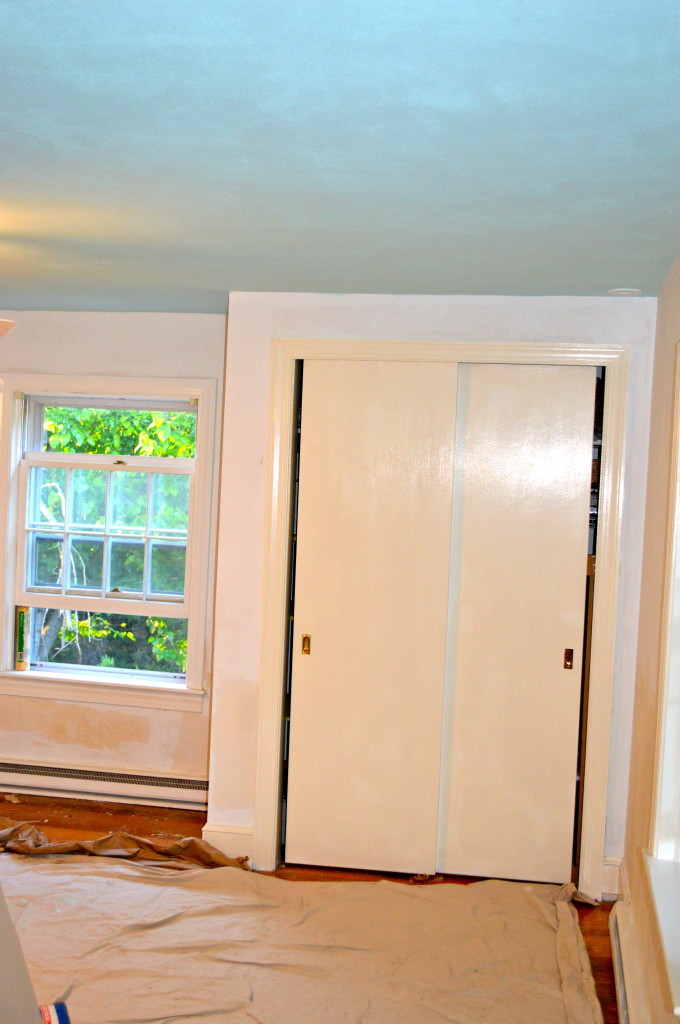 I promise to share more nursery progress with y’all as it happens!  What an exciting chapter of our lives to be in.  🙂  Couldn’t feel more blessed right now.

3 thoughts on “Painting the Nursery- A Family Affair”