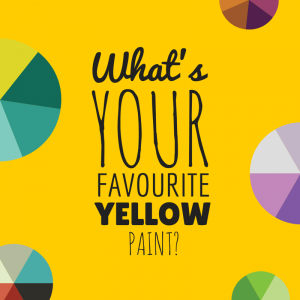 Poor husband didn’t know there was more than one shade of yellow.  (I’m going to blow his mind later in life when we start to figure out a good white paint color for the master bedroom.)

So when I decided I wanted to paint our family room yellow, he just sort of assumed we’d head to the paint shop and pick up a gallon or two of yellow.

I’ve been slowly decorating the family room over the past few months, picking up pillows here and lamps there.  I want the vibe in the family room to be almost surprising for an 1850s farmhouse: lively, bold, and somewhat contemporary.  That means I don’t want a pale yellow paint that would pass for a nursery… I want to walk into the room and feel energized.  Feel sunny.  Having done a lot with Benjamin Moore (in our kitchen and half-bathroom) already, I wanted to use a new brand of paint– if for no other reason than to familiarize myself with the pros and cons of different paint brands.

First I went to Palette Paint in downtown Charlottesville and played with their paint samples, bringing along my sample of Russell Green by Benjamin Moore.  Together with the store attendant, I chose three yellows made by Farrow & Ball that worked well with the green paint chip: Hound Lemon, Dayroom Yellow, and Yellow Ground.  They sell these cute little samples for a few bucks each that allows you to paint directly on your wall and see how it works: 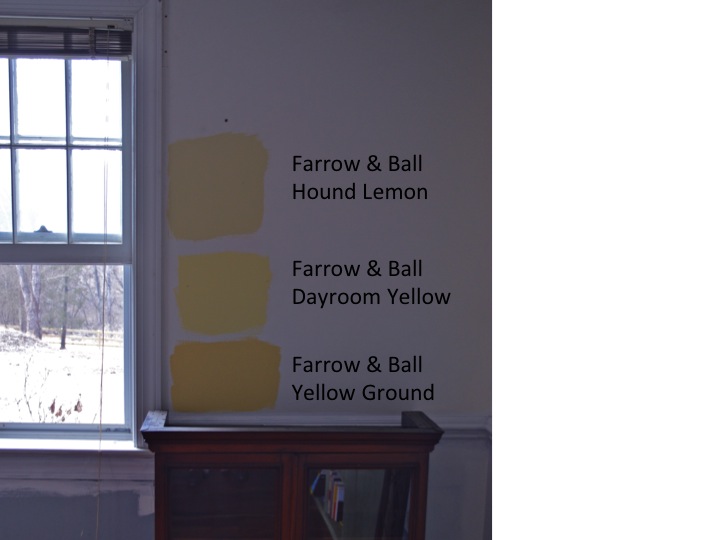 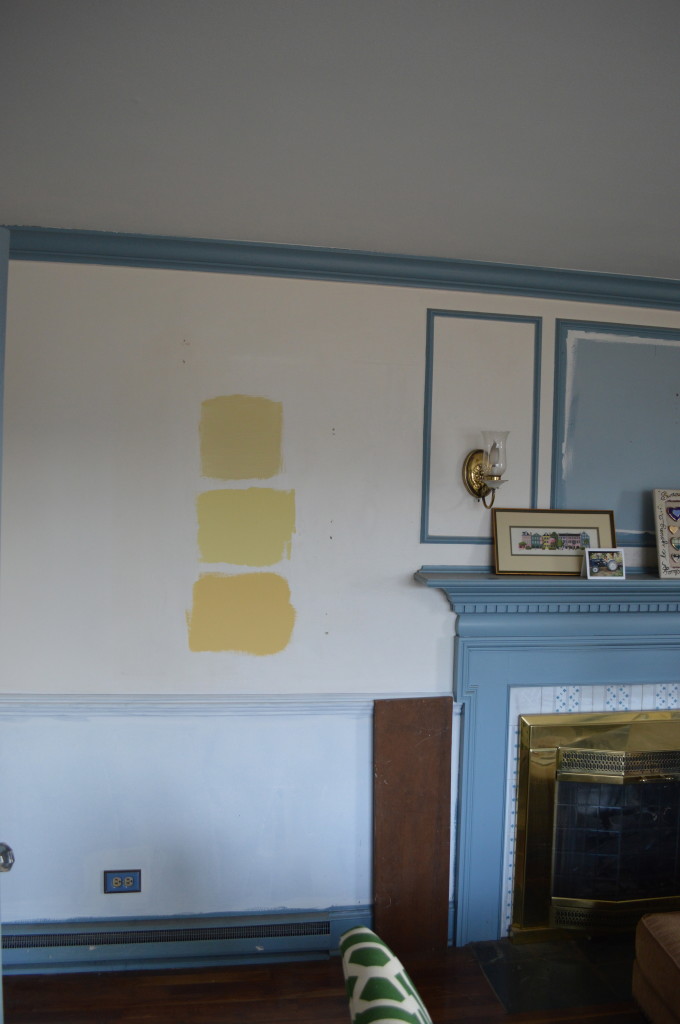 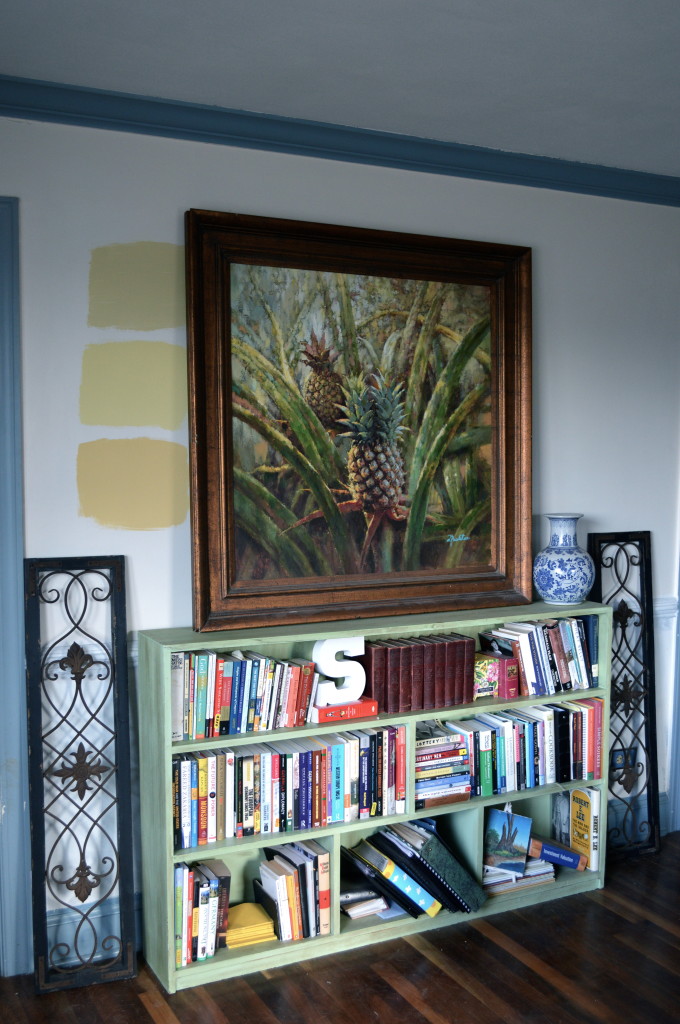 Poor David has been subjected to looking at these three shades (painted in five spots throughout the room where the sun is different) for about two months now.  The paints have so much pigment that they literally change colors depending on the light in the room.  These photos were taken when it was overcast and later in the day, so the colors appear fuller and perhaps a little darker than they do in the morning sunlight.  Plus, the samples (painted in the same order in those five spots) all look different from each other, too.  Sigh.  Sometimes the Hound Lemon looks too much like beige, sometimes the Dayroom Yellow looks too nursery-esque, and sometimes the Yellow Ground looks too much like a school bus.

After around one month and no decision, I picked up some samples made by C2.  C2 is a Canadian paint company that I just found out about.  Their paints, like Farrow & Ball’s, also have higher pigments than the average paint you’d find at a home builder store.  Anyway, I bought some large paint chip samples and taped them up on the walls too.  I moved them around a bit throughout the past month, but here are some pictures from their current location behind the couch: 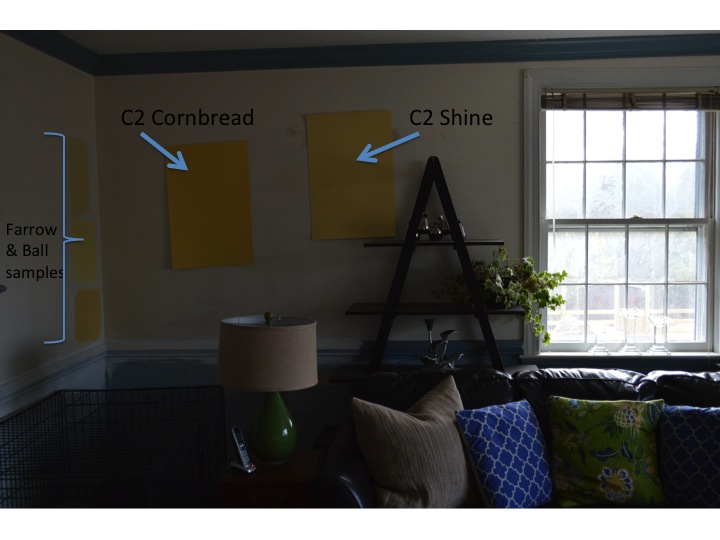 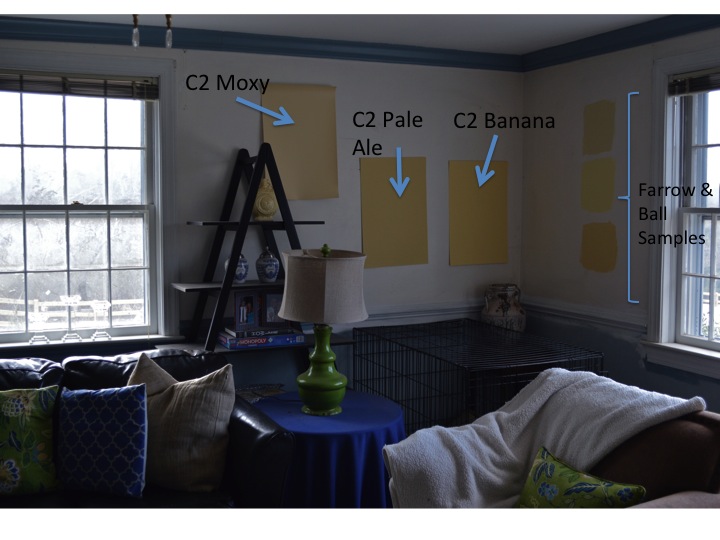 (Yes, we have two very very large crates on either side of the end tables.  They are enormous but they’re here to stay, at least for the time being.)  So my question to anyone reading this is which yellow do you like?   I’m not 100% sold on any of these yellow paints– they really are all so different– but I know I like the idea of a vibrant yellow in this room.  I think we’ve narrowed it down to two, but I’d love to hear everyone’s suggestions!  Or if there’s another yellow you think would work in this room, let me know!

7 thoughts on “Picking a Yellow Paint”