With news of a winter storm a few days ago, we decided we should make whatever preparations we could to get our old house to make it through.  The only thing we thought we could really get done with such little time was to insulate our water pipes; adding pipe insulation helps stop pipes from freezing and bursting, which can be VERY costly and force you to cut off water to your house.

Pipe insulation in and of itself is actually pretty simple: in its most basic form, your pipe fits into a slit down the middle of some foam insulation.  And it’s done!  You can get pretty creative with more expensive stuff, but knowing we just needed something fast, I got a few pieces of the cheap stuff.

While the insulation itself is pretty basic, getting to the pipes you want to insulate can be a challenge.  Generally, the pipes that need insulation are going to be either in the attic or under the house.  Getting to pipes in the attic may require some acrobatics and maneuvering around the beams and whatnot, but access to pipes under the house, however, will generally come in one of two ways: a basement (Yay) or crawl space (Boo).  Most of the pipes in our house run in the crawl space (I know this because I checked the basement first), so let’s have some fun crawling around under the house!!!

WARNING: if you are in any way claustrophobic, I highly recommend you not crawl under your house.  You will see why soon enough.

First thing is to find the crawl space access.  We have a few, but the one we want is where the main water supply enters the house: 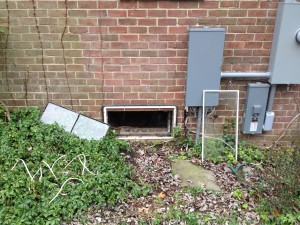 When I first crawled in, I was quite happy to see some pipes already insulated!  This also meant I had to journey further into the crawl space…  Here are a few pics from that journey: 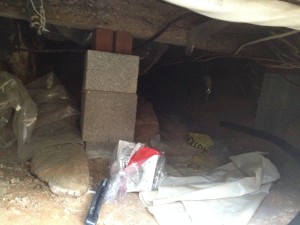 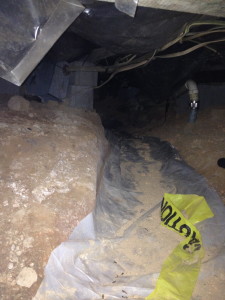 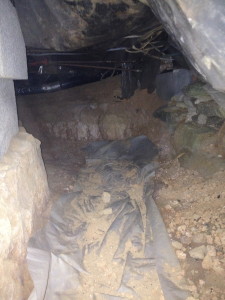 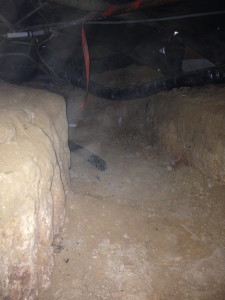 At this point, I was right under the middle of the kitchen, which had plenty of water pipes needing insulation.  I noticed some of the pipes had a strange orange wire wrapped around them, and since I didn’t have enough insulation for every pipe anyway, I decided to deal with those another day. 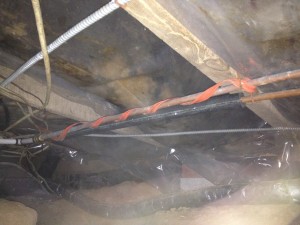 Putting the insulation on actually took only a few seconds.  I have found it easiest to start with one end of the insulation and put the pipe through the slit in the foam: 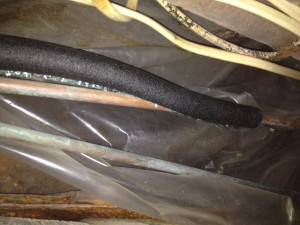 From here, the rest of the foam slid over the pipe pretty easily: 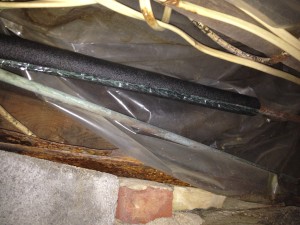 At this point, you may or may not be done, depending on the insulation you got.  Ours was pre-glued, meaning the slit has glue on each side covered by some plastic.  The advantage of pre-glued is that once the insulation is glued together, you have to actually cut it to get it off.  I actually saw a few pieces of non-glued insulation under the house which had fallen off the pipe.

To finish up the glued insulation, simply remove the plastic in the slit… 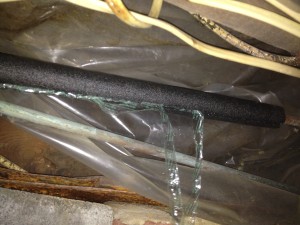 And press the two sides of the slit together: 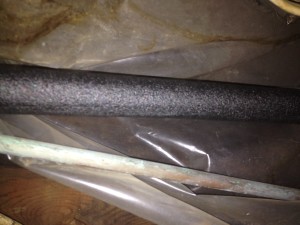 Voila!  Your pipes are now nice and cozy

As you can see, insulating your pipes is pretty easy to do yourself as long as you are prepared to get a little dirty… 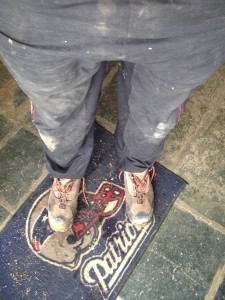 Yes, those pants are supposed to be black 🙂

1 thought on “Prepping for our First Winter Storm”