Welcome to Seldom Seen Farm. Off a gravel road that meanders along what was probably an old deer trail at one point is a gasp-worthy brick farmhouse tucked away behind centuries-old boxwoods. Believed to have been built in 1817, “Seldom Seen” Farm sits comfortably in the heart of Virginia’s Shenandoah Valley. Today, Seldom Seen is a beautifully renovated tribute to the legacy of extraordinary spirit. 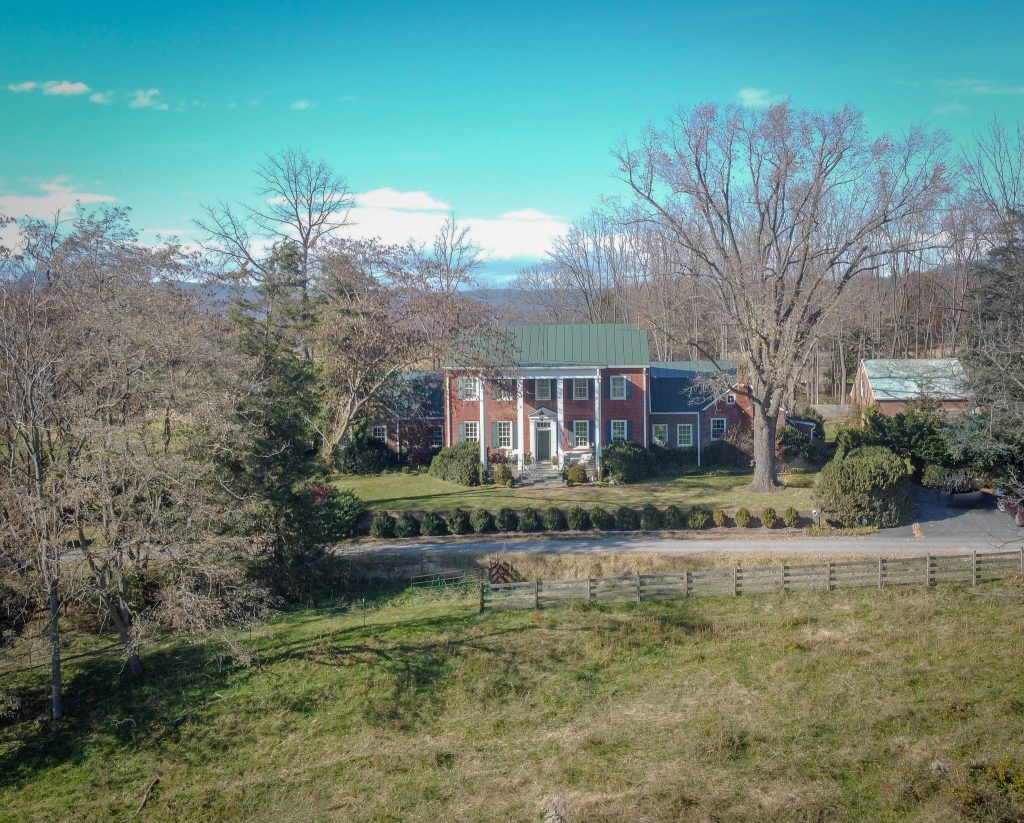 Seldom Seen Farm is located on a hill overlooking green pastures both in front of and behind it, and just past the pastures are unparalleled views of the Blue Ridge mountains. The front of the house looks directly out to the South Fork of the Shenandoah River, to which the property extends. I could not stop staring at this insanely picturesque view when I was here. My photos do not do this justice, believe me. 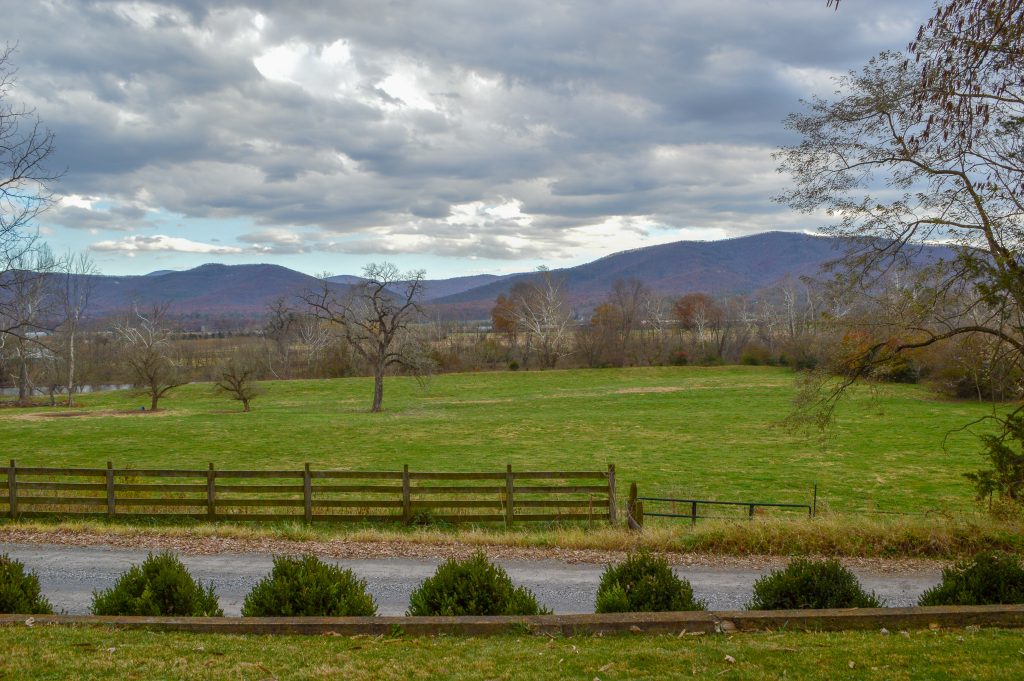 Seldom Seen is one of a few brick farmhouses constructed in the same style– perhaps even the same footprint– along the Shenandoah River in this area of the Valley. Its current owner, Kim & Nancy Brabson and their sweet family, inherited the farm from Kim’s parents. Kim told me that his parents were stationed in Panama in 1967 when his father, a U.S. Army Colonel, knew he’d be retiring in the imminent future. On a trip from Panama up to the Pentagon, Colonel Brabson worked with a realtor and flew over the Shenandoah Valley. He saw this farm from the air. Upon his return to Panama, he told his wife that he’d purchased a farmhouse. “That’s nice, dear,” she reportedly replied, an amazing attitude of an Army wife married to someone with zero farming experience. 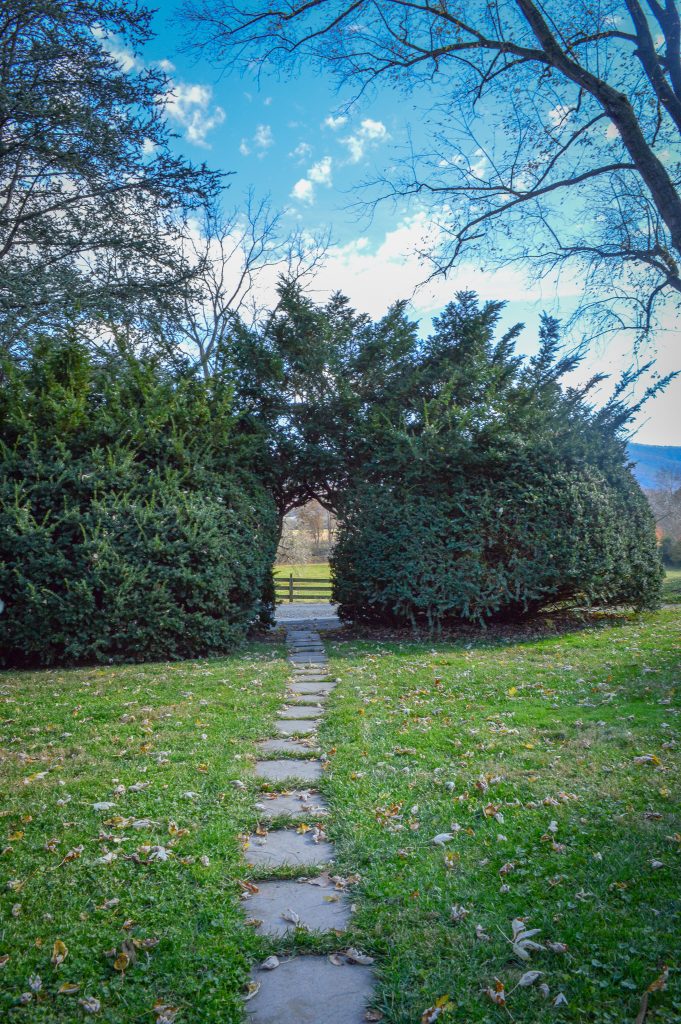 The Brabson family moved from Panama to Virginia shortly thereafter and got to work restoring this beautiful house to make it their own. 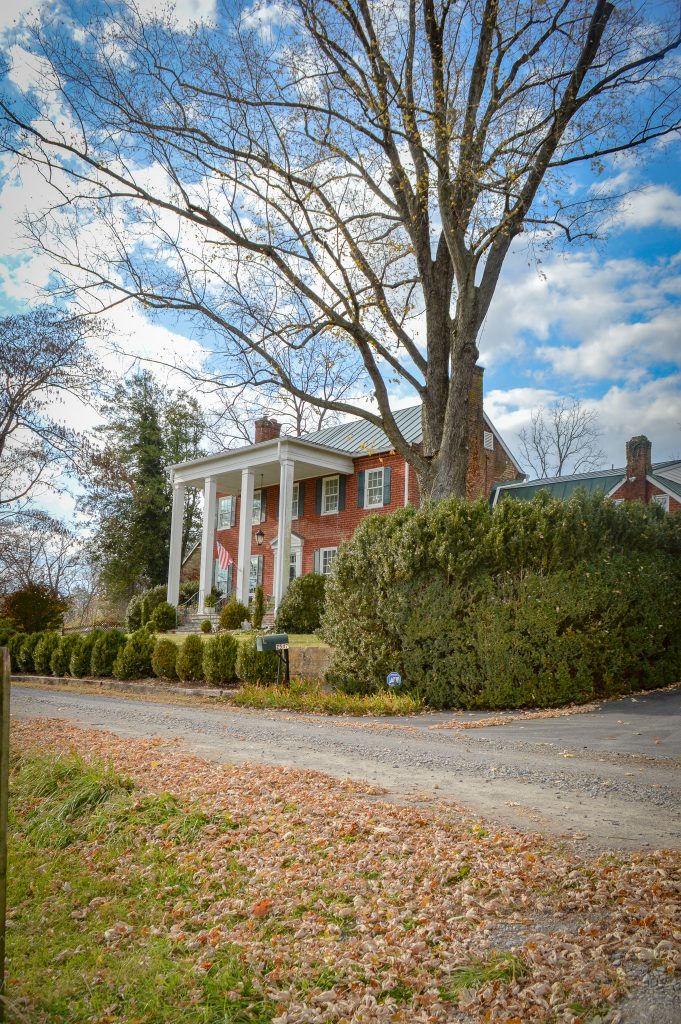 The side of the house to the right is an old building that was originally separate from the main house. It was the former kitchen. At the time of this house’s construction prior to the Civil War, it was a plantation and enslaved people likely lived in the space above the kitchen. 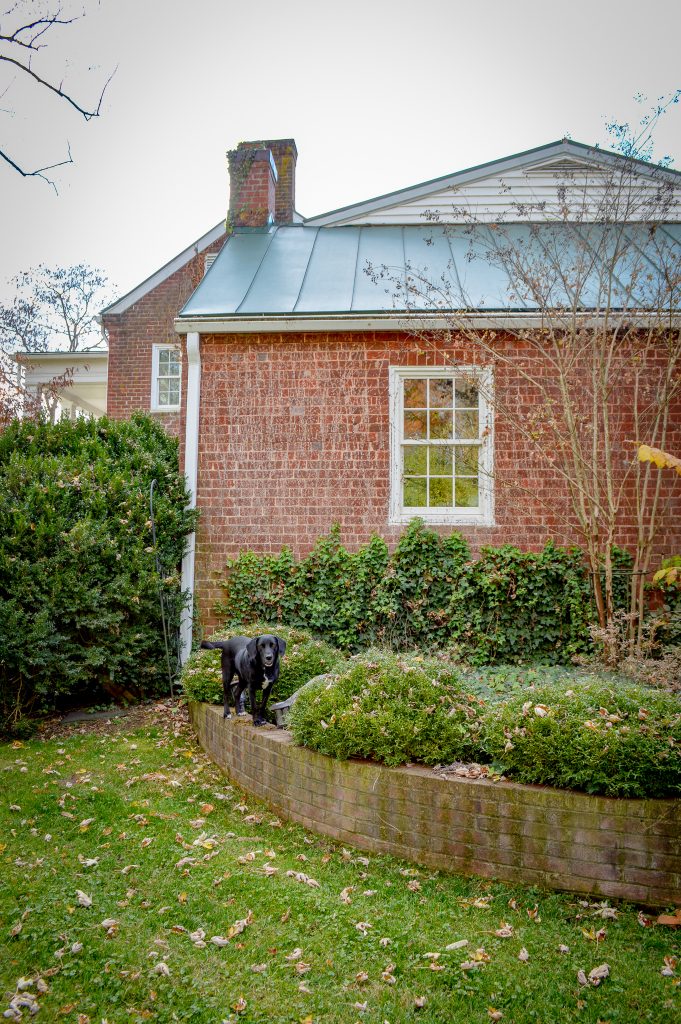 Former owners joined the old kitchen building together with the main part of the house. Today it blends in seamlessly. Below is a view from the back of the old kitchen and connecting space (which now has a modern kitchen) going to the main house. 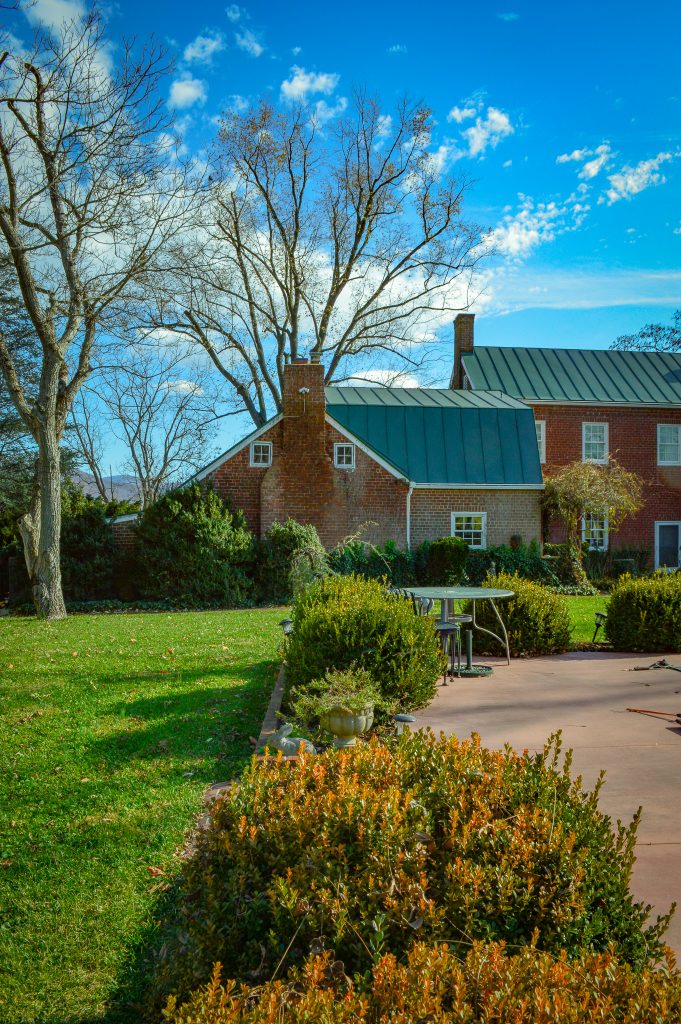 The main foyer has a green front door that welcomes guests inside. I love the sweet stained glass above the front door. It may not be original to 1817 but it certainly gives the house character. 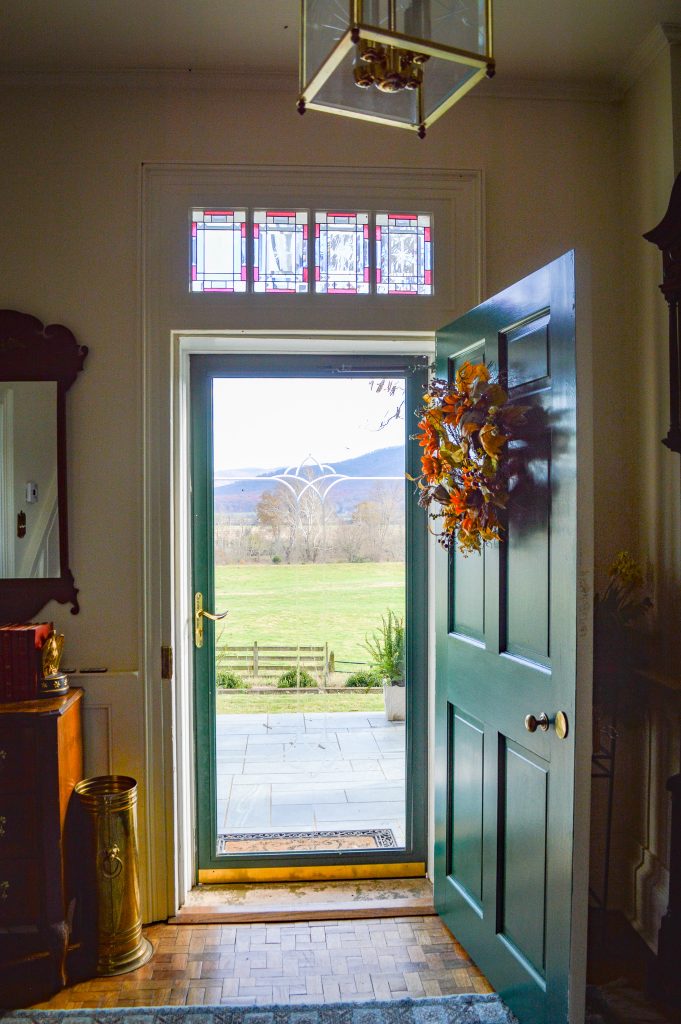 The Brabsons named the otherwise-nameless-farm “Seldom Seen” because of how remote it was, and the fact that they rarely had unexpected guests. It is a tranquil escape. 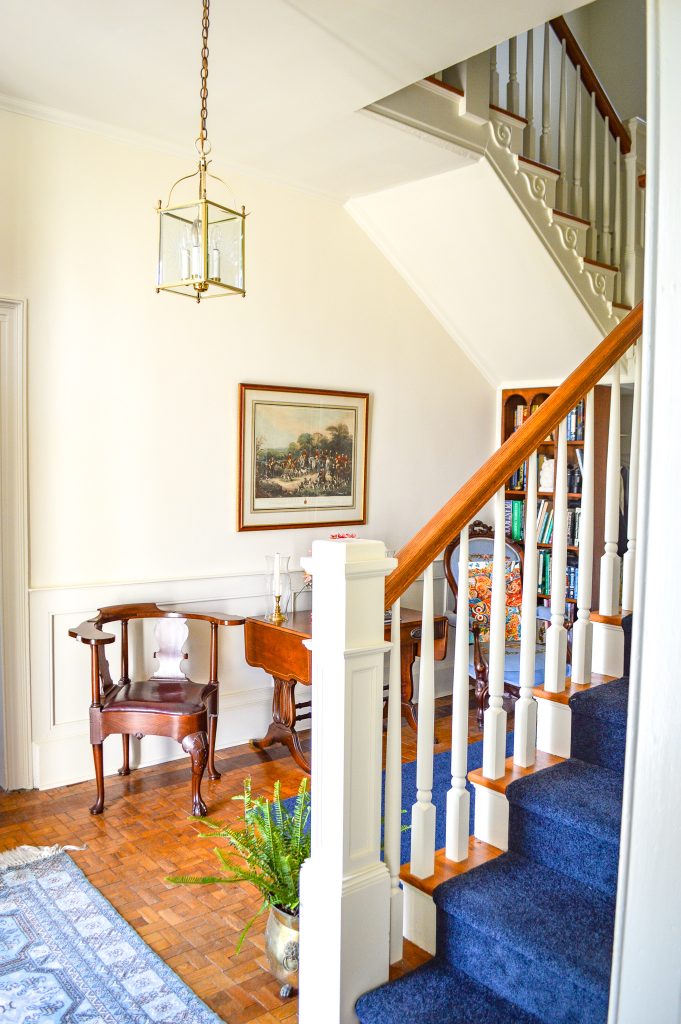 As I often love to check out, the woodwork on the side of the stairs did not disappoint. Look at the beautiful scrollwork. Kim Brabson said originally there was a wood railing on the wall that mimicked the handrail but it wasn’t functional, so he took it down. The wainscoting against the wall is perfectly elegant. 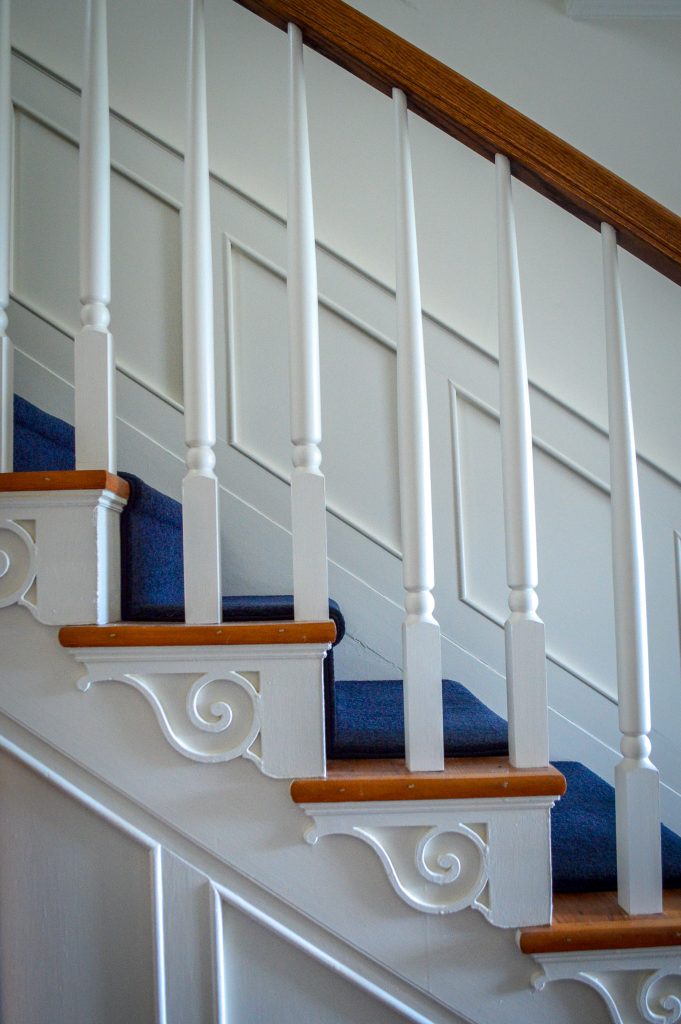 Here’s a view from the foyer looking up: 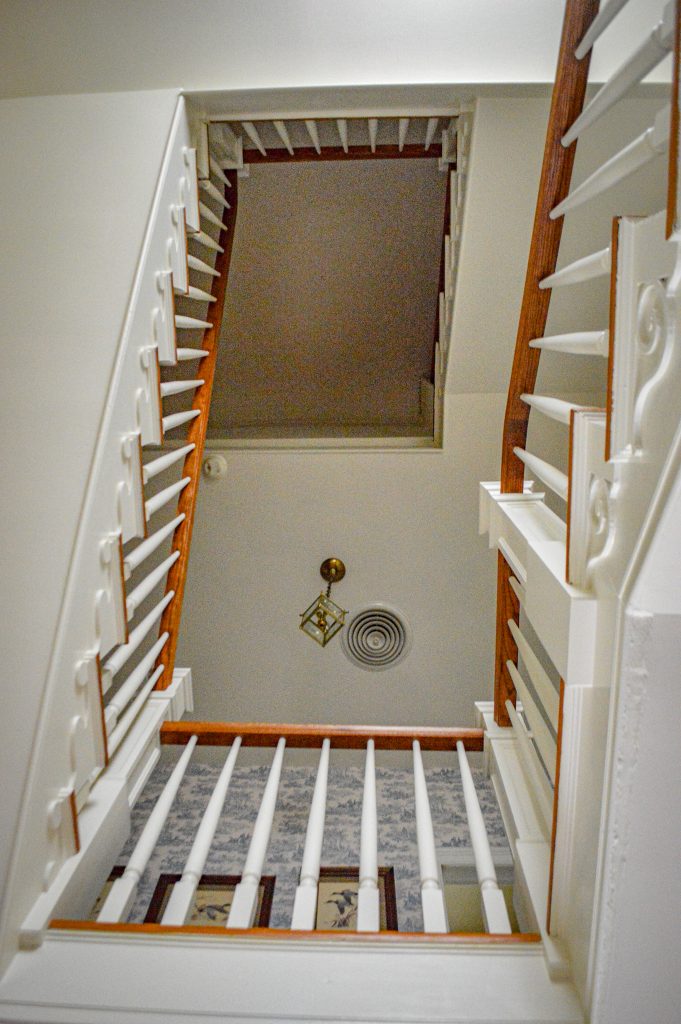 Kim and his wife redecorated a few years ago and chose this gorgeous deep blue for the living room. It is regal and a perfect nod to the Blue Ridge mountains just outside the windows. 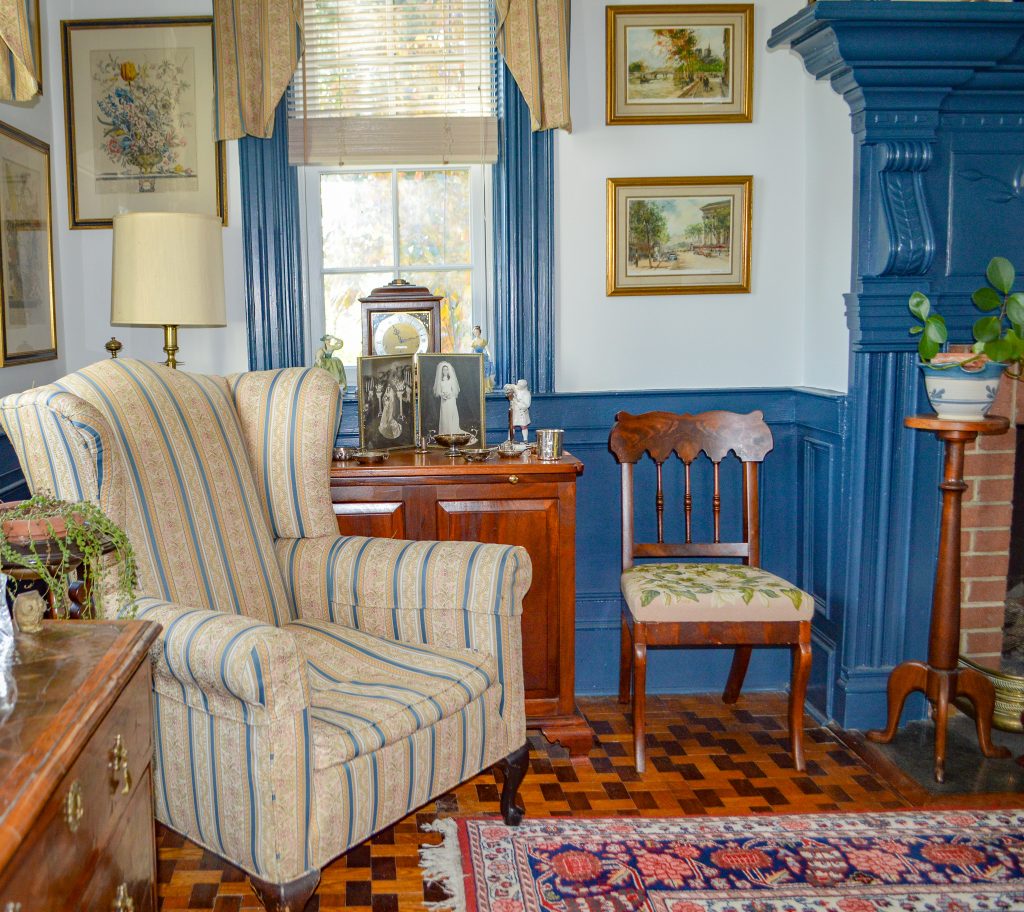 Look at the detail on these fireplace mantles. I’m swooning over this craftsmanship– I love every bit so much, and it makes the room feel so special. 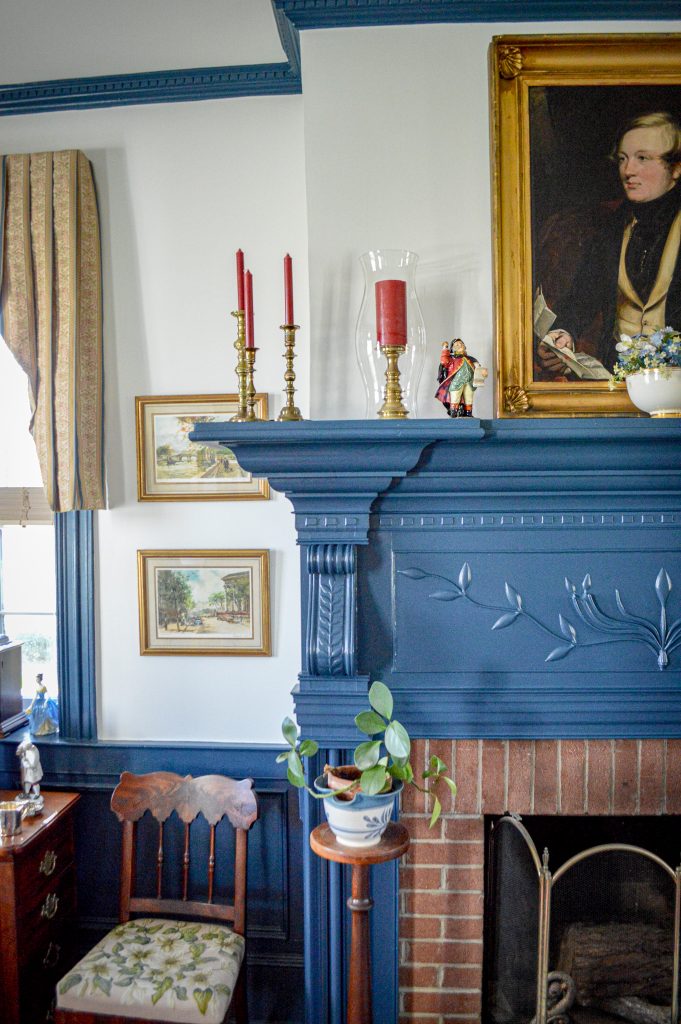 Kim’s mother, Lillian, was quite an extraordinary woman. In addition to her gentle and supportive attitude toward her husband for purchasing a farm she hadn’t seen AND without any knowledge of operating a farm, she was one of those people who is never bored. Do you know what kind of people I’m talking about? They are always making and creating goodness in their lives. They set out to do something and make it happen. Anyway, Lillian made this exquisite needlepoint rendition of Seldom Seen that now sits in a place of honor in front of the fireplace: 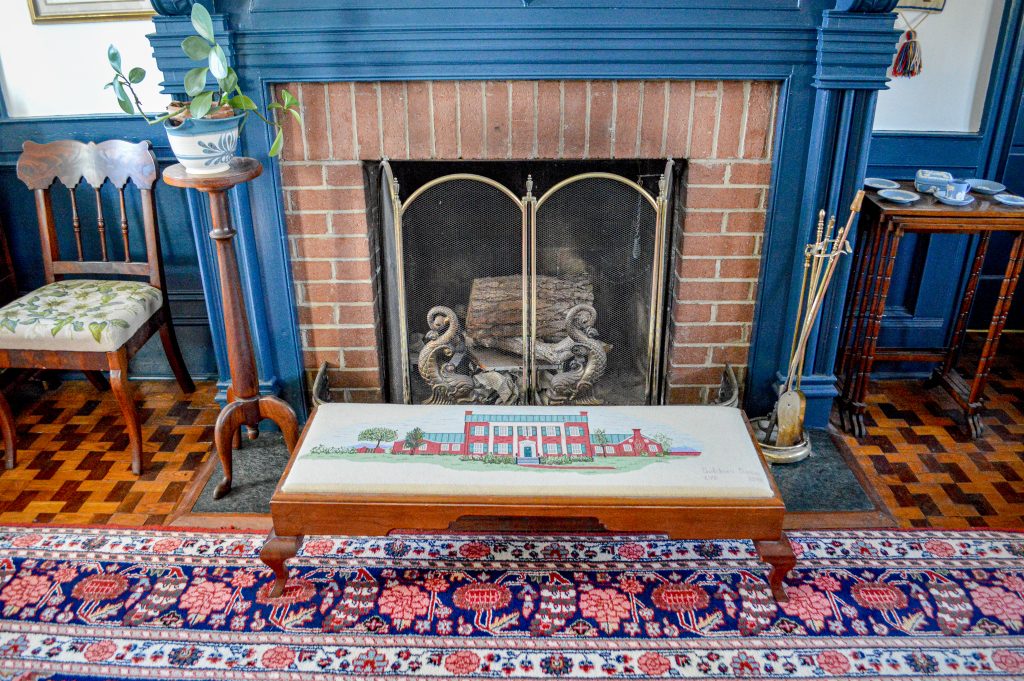 Colonel Brabson was also an accomplished woodworker. This couple sounds just amazing– never idle and taking life by the horns. I admire them so much for choosing their path in life and working hard to achieve their goals. Colonel Brabson made a lot of the furniture currently in the house and his craftsmanship is just amazing. Remember, this was his hobby, not his profession! Check out this chair in the living room he made: 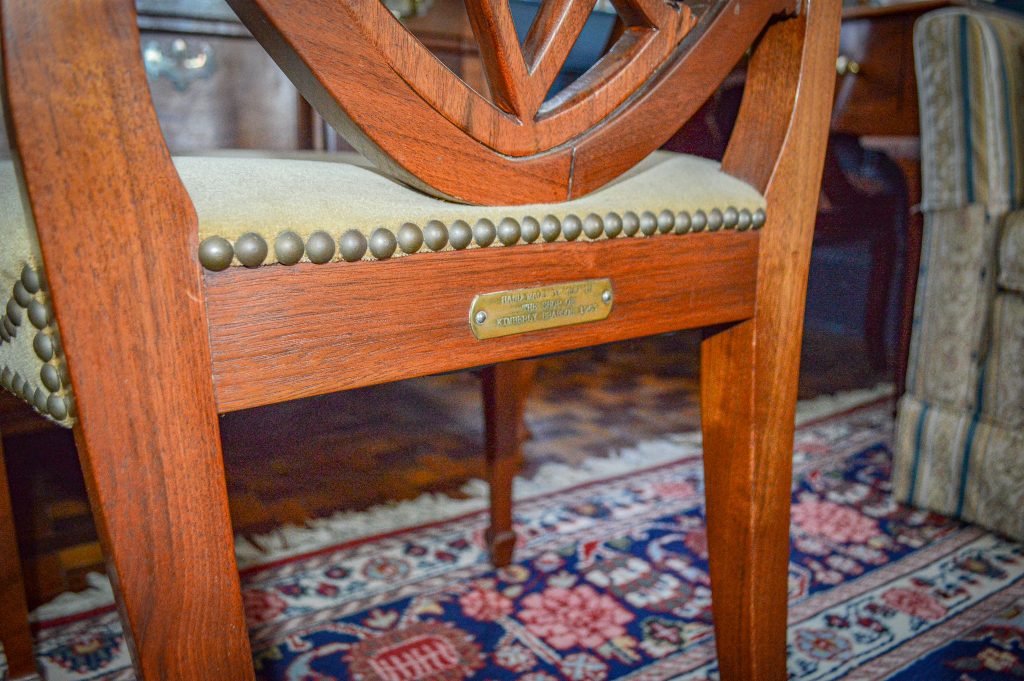 Through the foyer on the other side of the house is a formal dining room. Colonel Brabson was accustomed to eating in officer’s halls and once he and his family moved here, he never ate in the kitchen or anywhere other than this room. 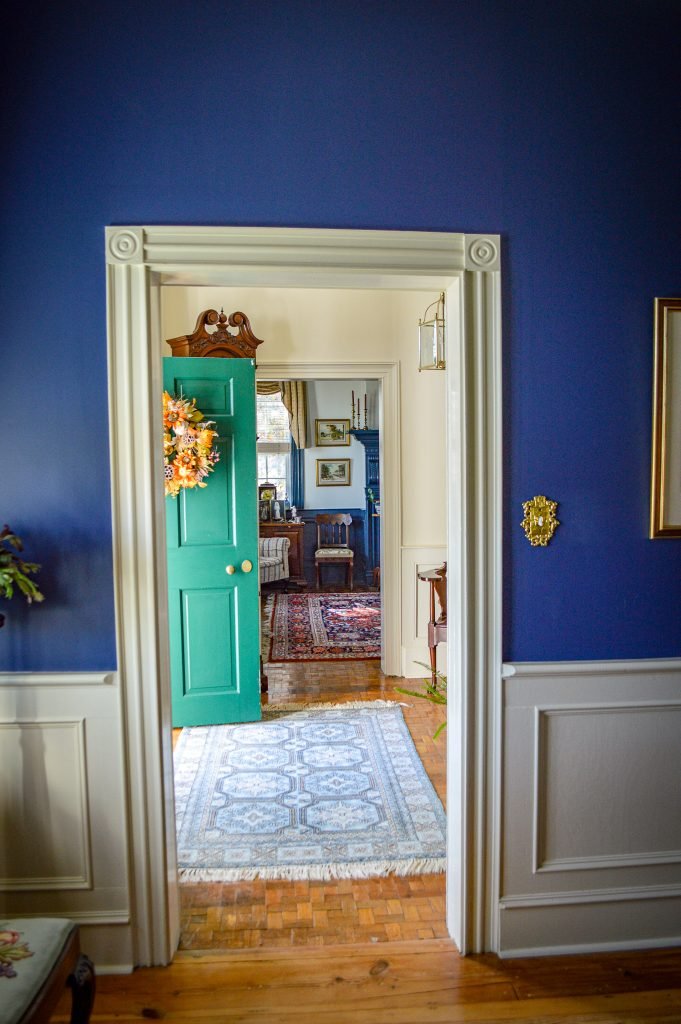 …and I can see why. This dining room. is. gorgeous. 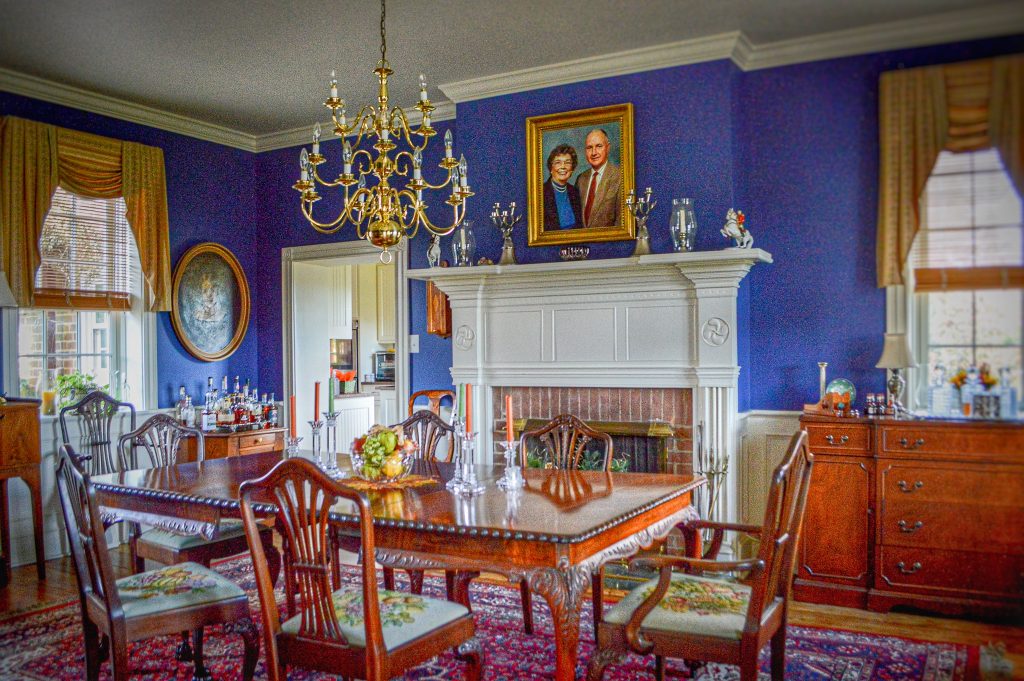 The walls and wainscoting are inversely blue and white compared to the living room. The fireplace mantle is no less majestic here. Above the fireplace is a portrait of Colonel and Lillian Brabson. I love the sweet touches paying homage to them and other family members throughout the house. To me, that’s a marker of a solid Southern home: the emphasis on and respect for generations of the family past and present. This house definitely fits the bill. 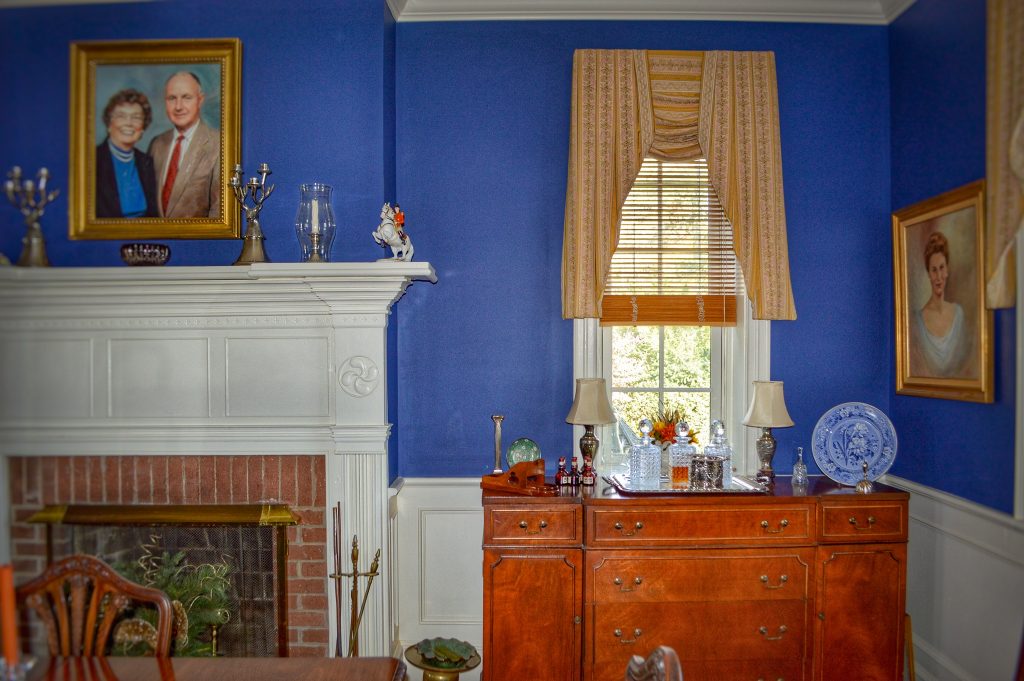 The floors in the dining room needed to be replaced years ago, so the Brabsons repurposed wood from the old kitchen ceiling/ floor where the enslaved people slept. This way they kept all the materials original to the house. As you can tell, the planks are wide and the overall effect is timeless. 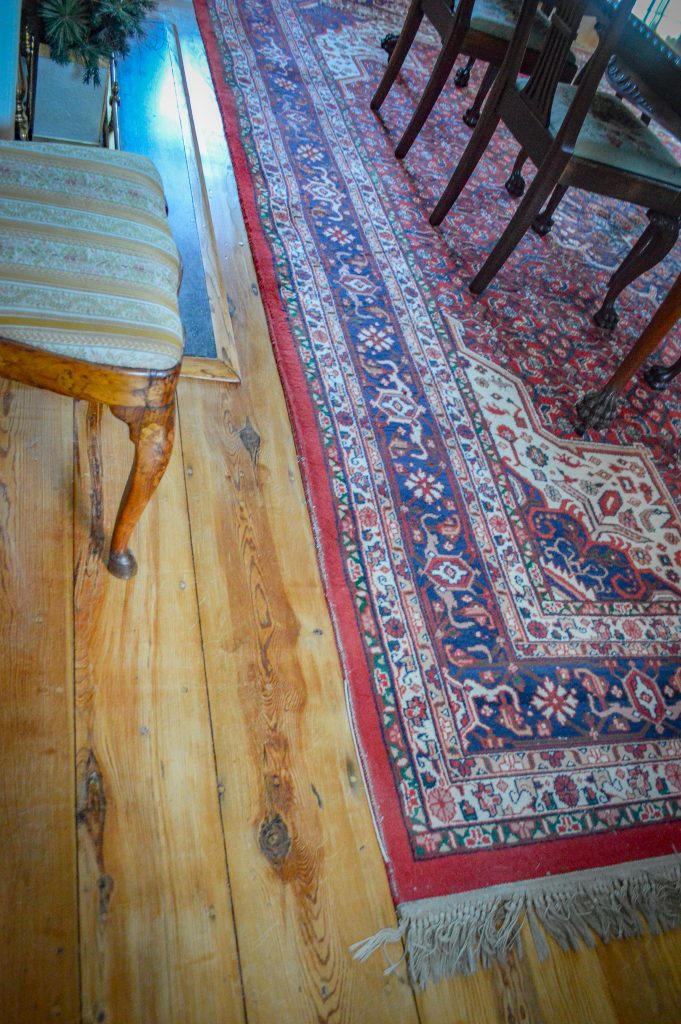 Each of the dining chairs is its own work of art. Either Lillian Brabson or her mother-in-law needlepointed every single seat cushion. Colonel Brabson’s mother made this one. She marked it with her initials MKB. I’ve never seen such an incredible family heirloom to pass down. Is that not amazing? 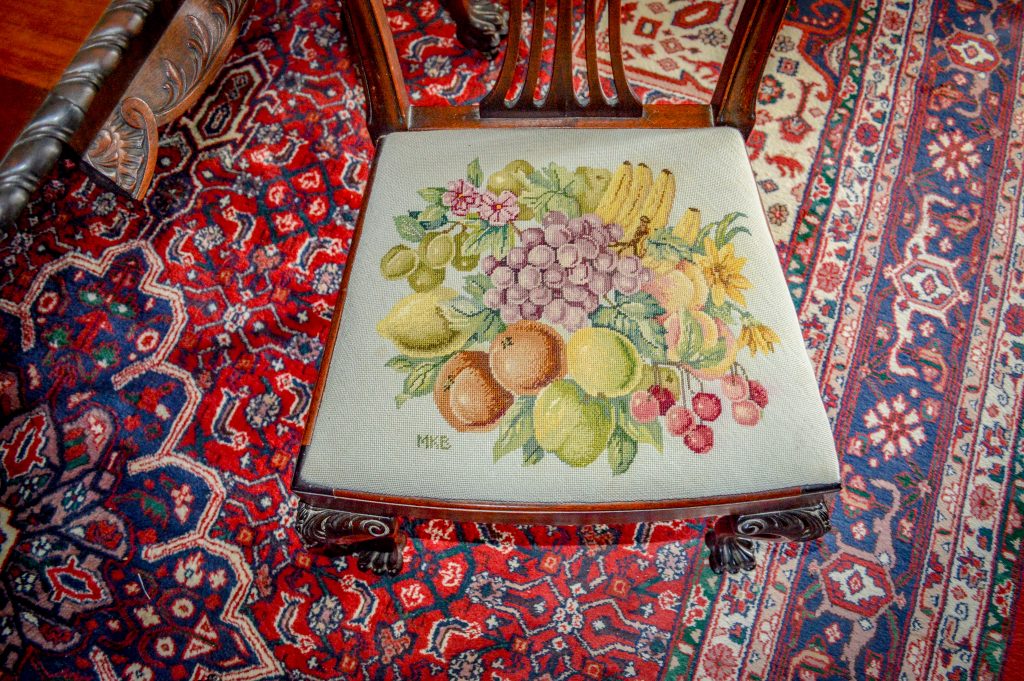 Through the dining room is the new kitchen, which joins the old part of the house and the old kitchen outbuilding. 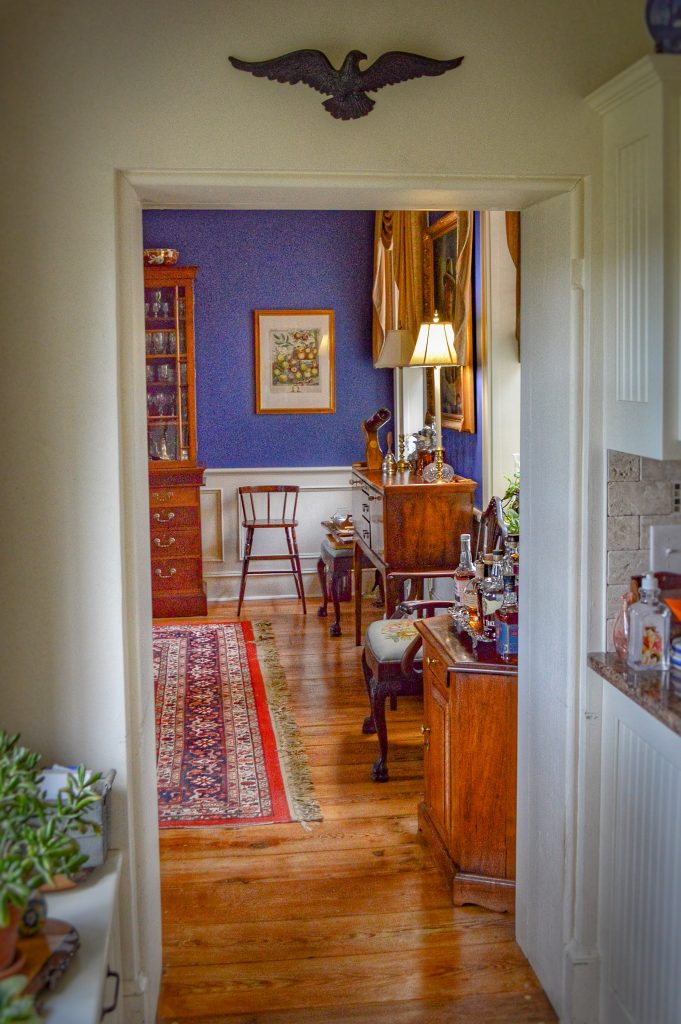 The kitchen is simple with little country features like cupboard doors embedded with beadboard. I love the blue plates running along the top that carry the dark blue theme from the other rooms into here. I also love this back door and the horizontal panes of glass. 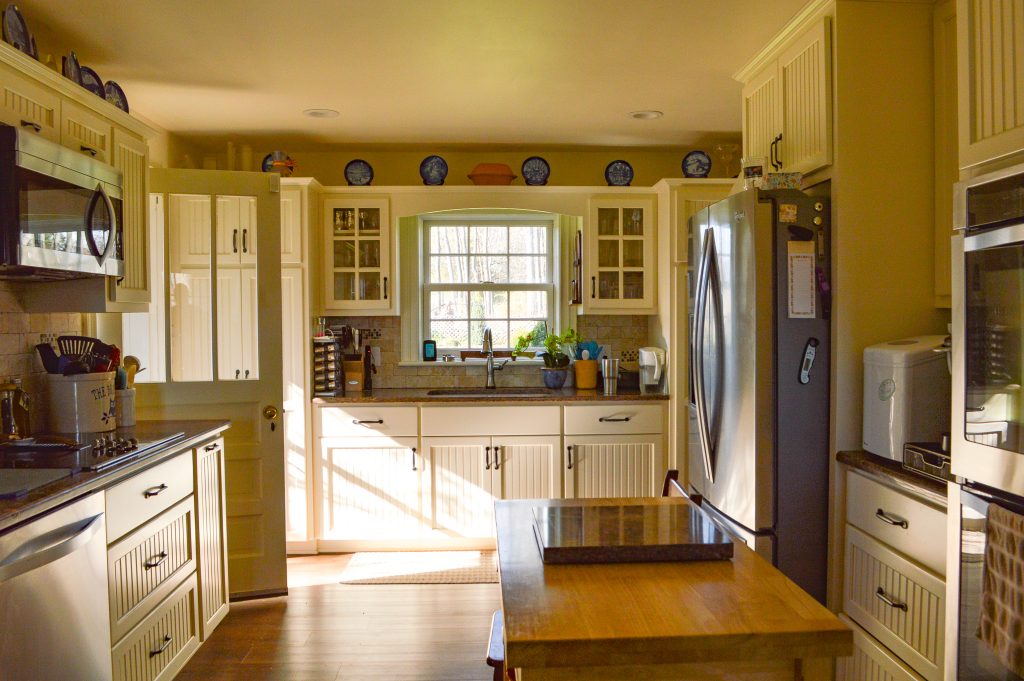 Sweet pup Georgia (below) cracked me up on my visit darting around to different doors posing for the camera. 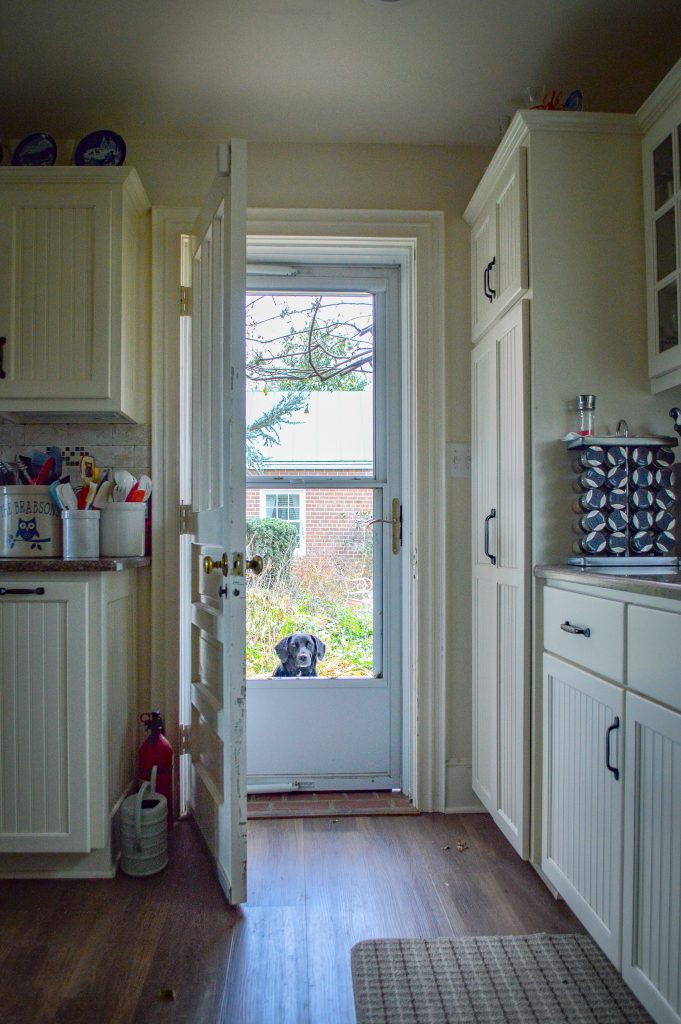 Through the kitchen is the former kitchen/ home for enslaved people. Look how thick the walls of the old kitchen are! The doorway between the two rooms is well over a foot thick. 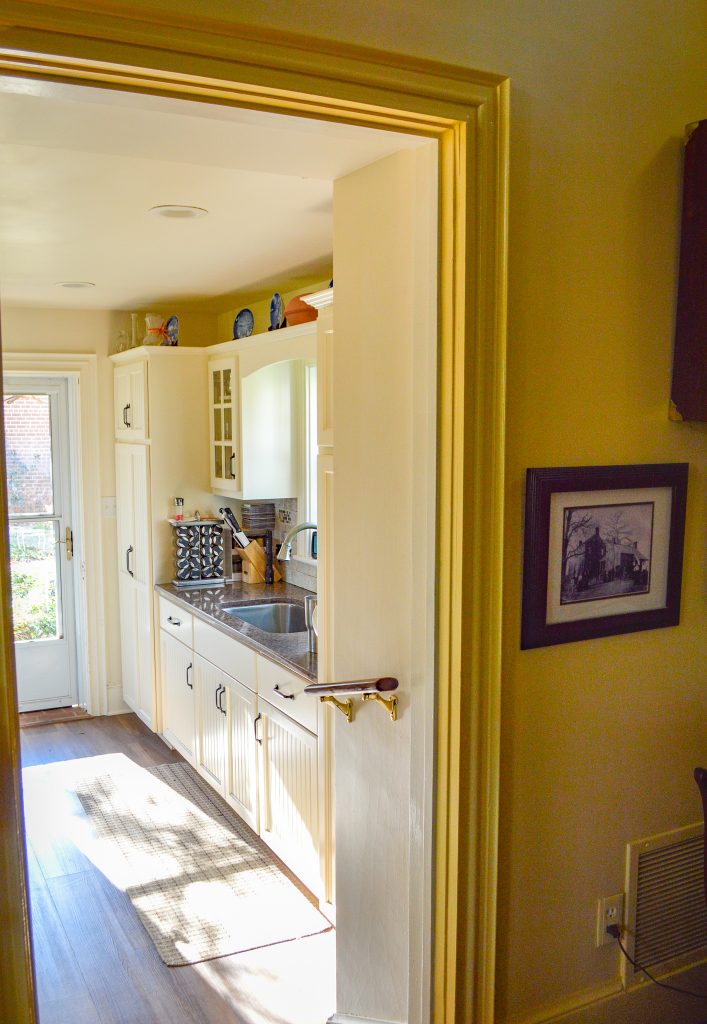 Here’s a zoomed in version of that photo on the wall. This is what the house looked like years ago. No front porch, but there was a covered porch connecting the kitchen to the main house. (My favorite part of the photo below is the man on horseback is holding a baby. Just… why???? So many questions. Don’t you wish walls could talk?) 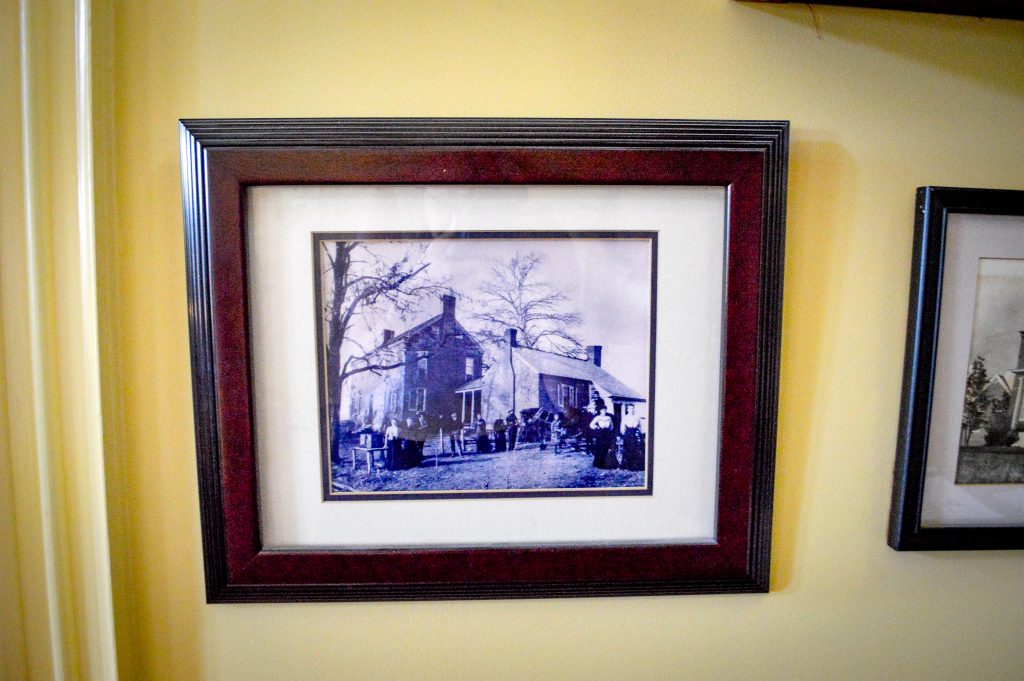 Here’s another photo of the house, taken sometime after the first one: 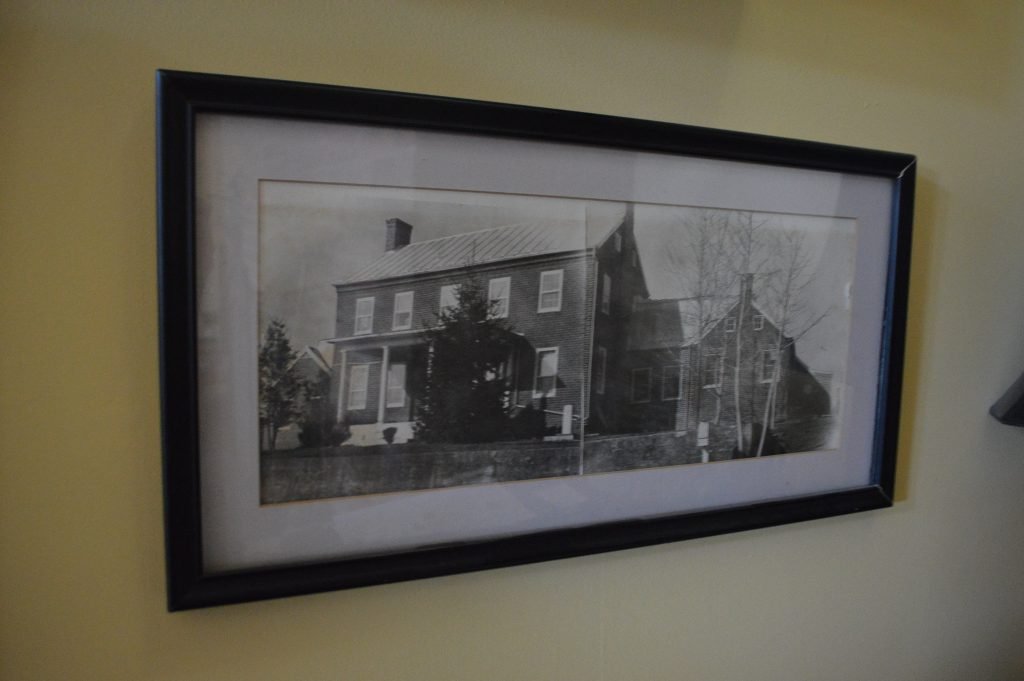 …as a reminder, here’s what it looks like now. A different vibe for sure! 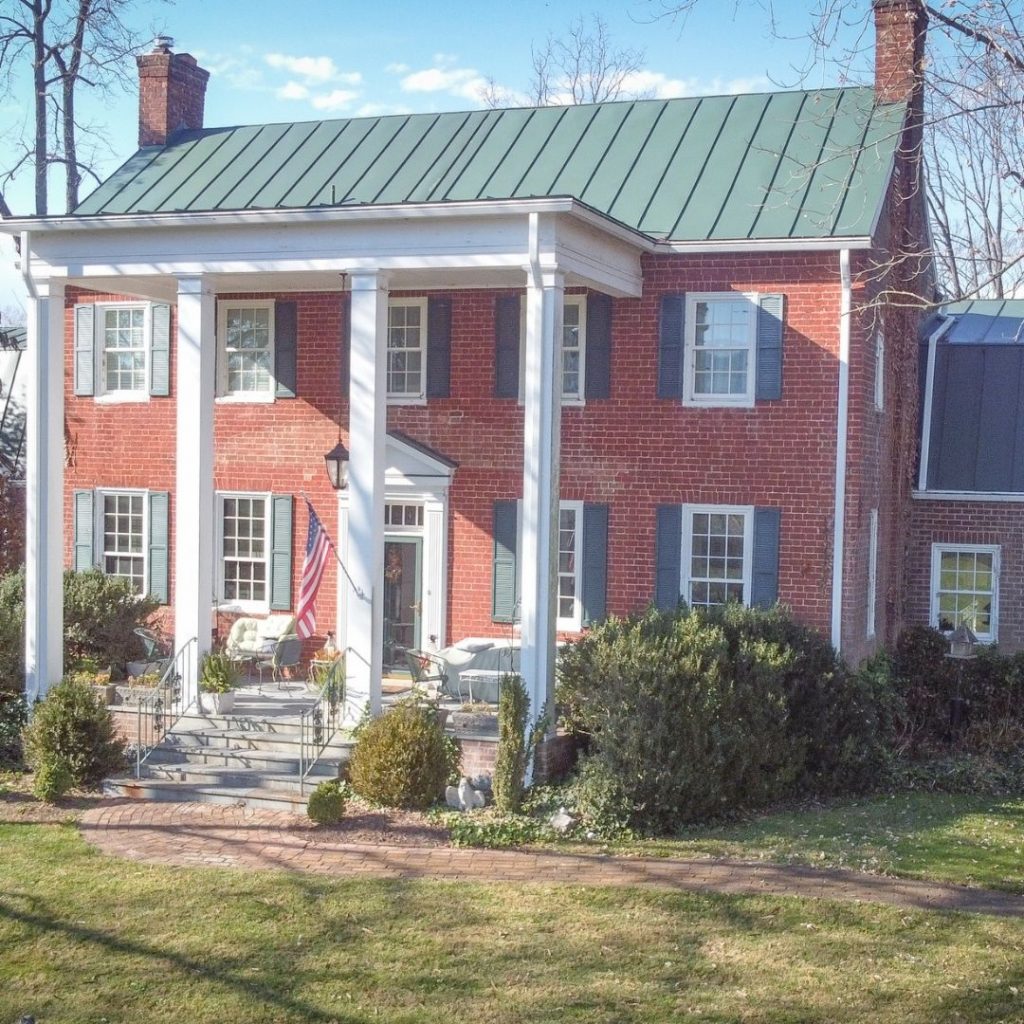 There’s a subtle detail that Colonel Brabson did himself in the floor walking from the kitchen to the family room: a stunning wood inlay compass pointing due north. I have so much respect for his woodworking skills. I also love that he thought “hey, this would be a cool idea” and then he just went ahead and did it. It’s so common for good ideas like that to never come to fruition but if there’s one thing I’ve learned about this family from their farmhouse, they’re a family of doers, not just thinkers. 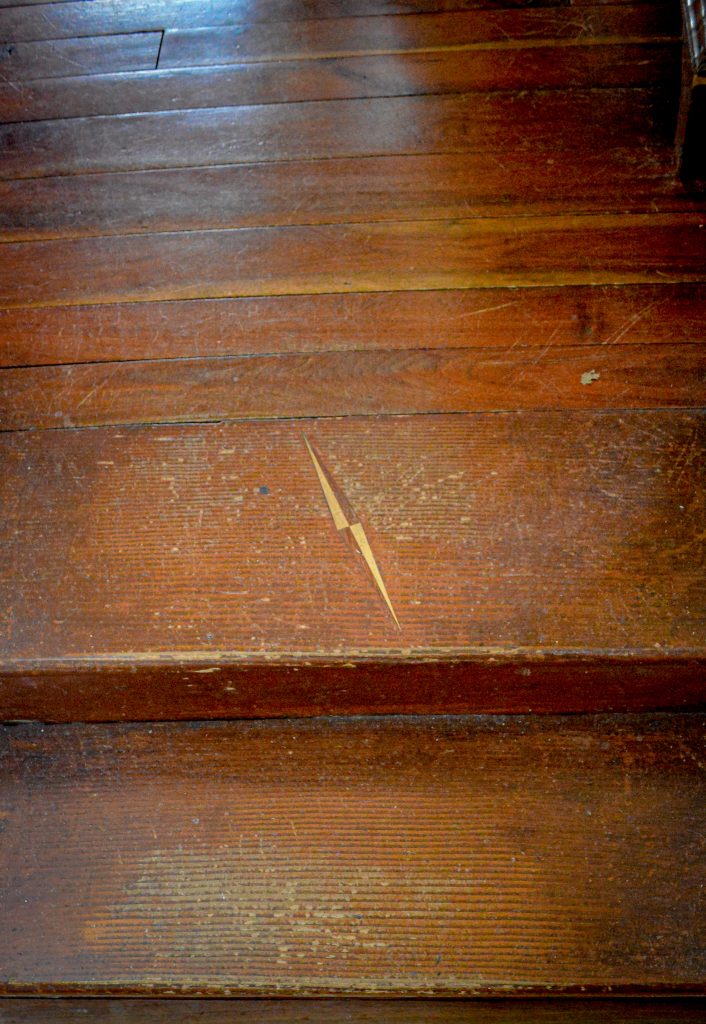 The family room now soars up to the roofline. It is a cozy room housing a large game collection curated by Colonel Brabson. He was an avid hunter. There are two large brick fireplaces on either end: one was formerly for cooking, the other presumably for keeping warm. 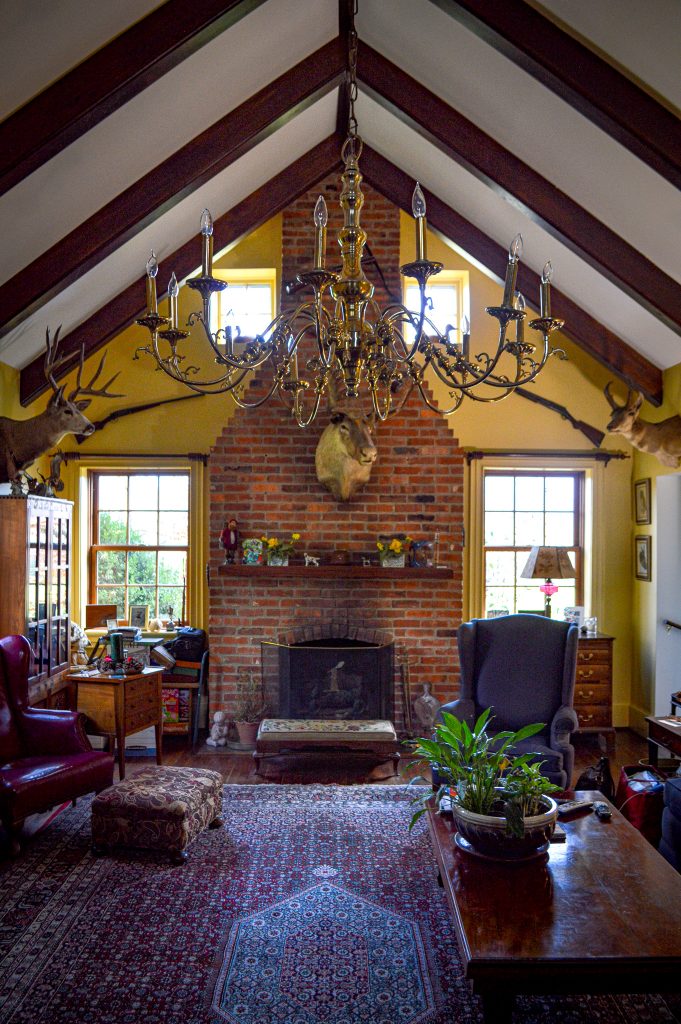 One fascinating detail is this enormous chandelier hanging in the middle of the family room. It fits this space perfectly. When he was stationed in Japan, Colonel Brabson commissioned this chandelier out of melted down 105 mm brass Howitzer shells. (Here’s a funny story: when he was describing what he wanted, he said he wanted the chandelier to be yellow… when he first received it, the whole thing was spray painted yellow, so he sent it back in order to have the spray paint removed. It is now a true-to-form yellow brass.) 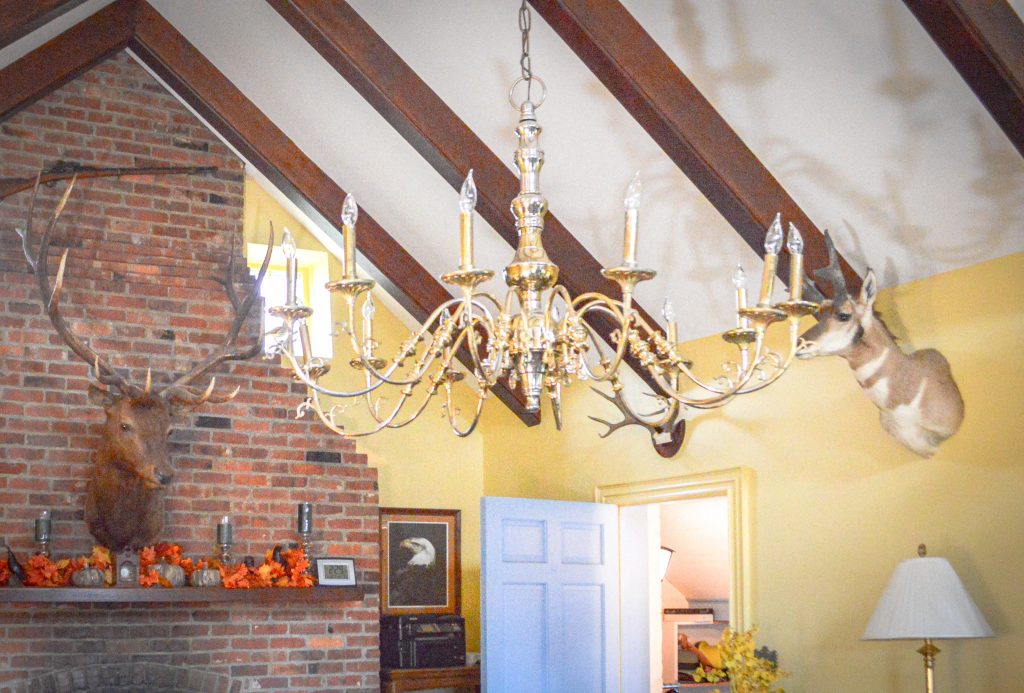 There are so many little details throughout this home that are obviously meaningful to the Brabson family. For example, this little corner of the family room has two prints of Albrecht Duerer’s that Nancy picked up in Germany years ago because she’s always liked owls and bunnies. 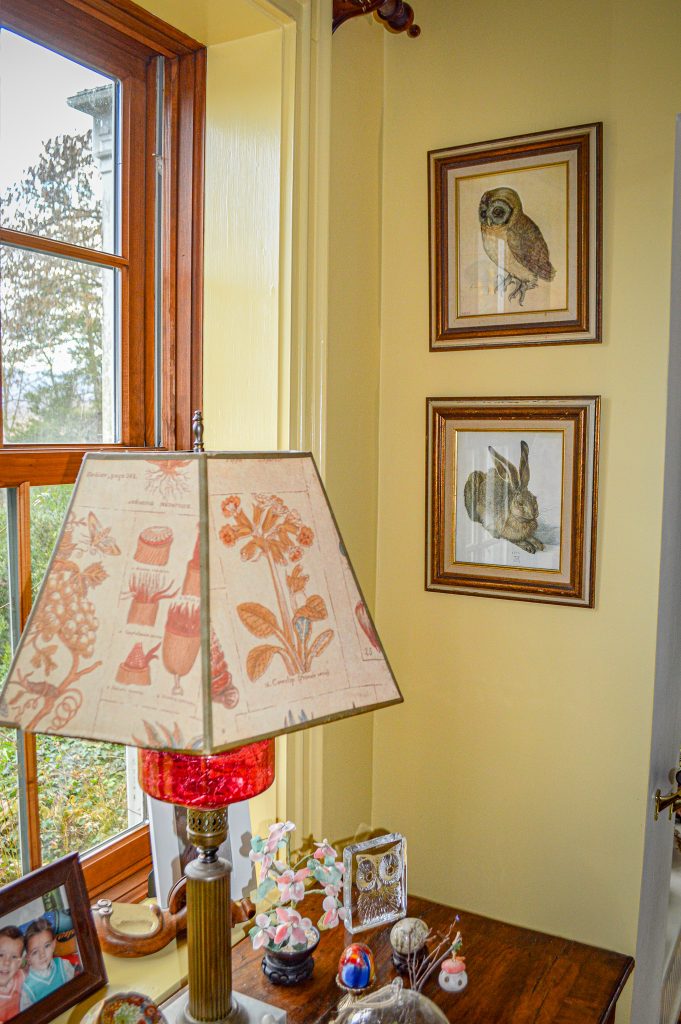 Photos of grandkids and family members are sprinkled throughout and there is no hiding the fact that this is a gathering place for this family to congregate. For a house that’s withstood the Civil War and so much we can’t even know about, it is doing a fabulous job at creating a safe haven for this family who has clearly given so much to our country through such exemplary military service. To see more of our tours click here >>