Well, that’s not exactly true.  As I’ll share in the coming weeks, we’ve done a few things here and there but I just haven’t made time to post them all.

Our sweet Evie turned 1 year old a few weeks ago.  I know it sounds so cliche, but I don’t know how that happened… seriously… how did that happen?  David’s and my life together went from as normal as it could be living in an 1850 farmhouse fixer-upper to totally upside down crazy once we welcomed Evie into our lives, and now that she’s been with us for a year, we kind of have a rhythm.  I’m sure it will all change, but for the time being, she’s sleeping well (knock on wood!) and we’re having a TON of fun hanging out with her and watching her grow.

Speaking of Evie growing, she received a very special gift from my Aunt Dede: the bed that belonged to her great-great-grandmother, the first Genevieve in her lineage.  It’s a beautiful four poster bed and I’m giddy that Evie will inherit such an incredible family heirloom.

We set it up in her bedroom where the old twin bed used to be by the window, but it wasn’t fitting right with the ceiling fan.  The blades of the fan could go over the four posts but it just seemed kind of weird to have an antique right next to a modern appliance.

So off to the Habitat Store I went, and came home with a $22 brass chandelier! 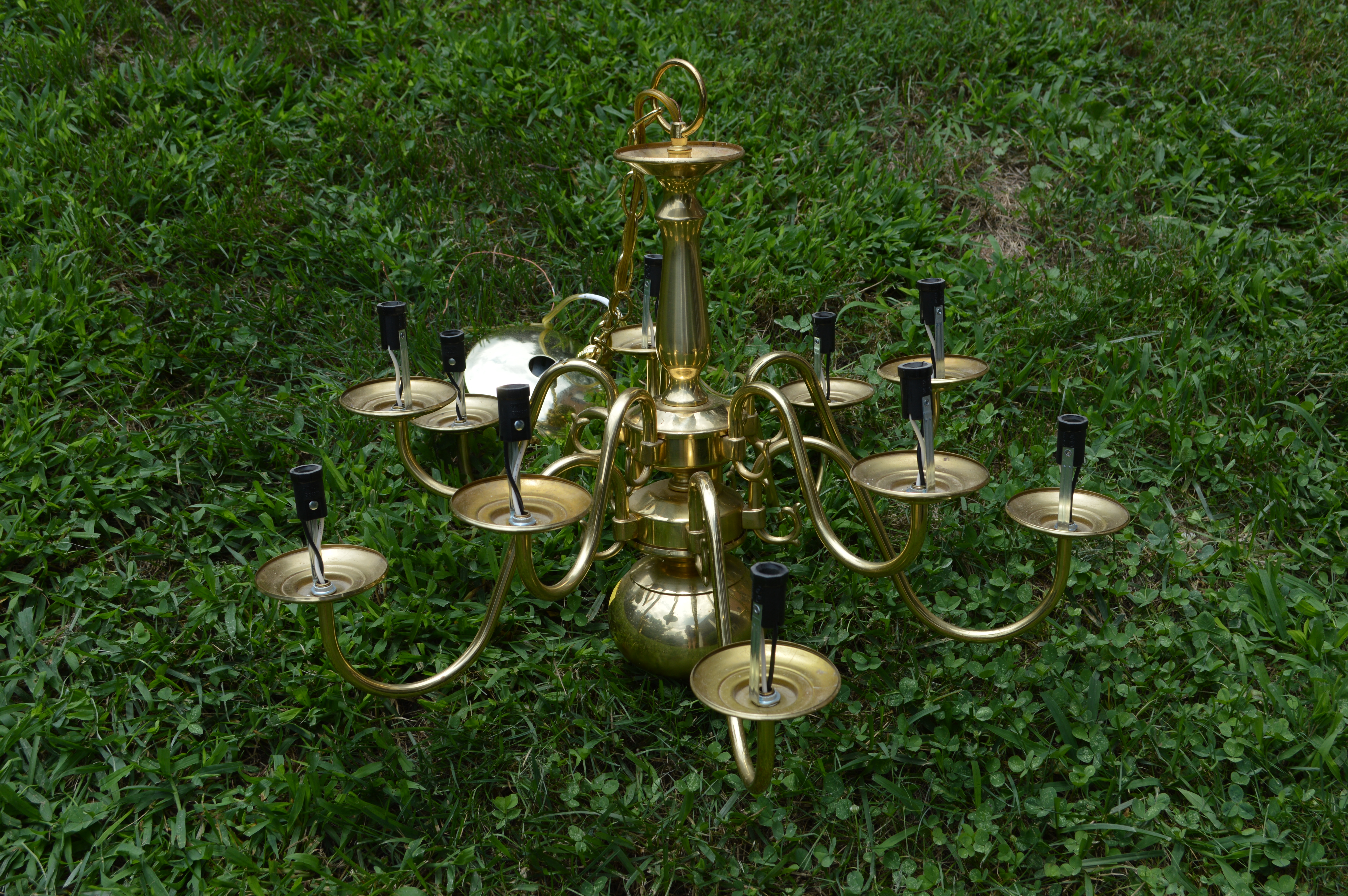 Well I decided to kick things up a bit and spray paint it the same color pink as the monogram hanging above Evie’s crib! 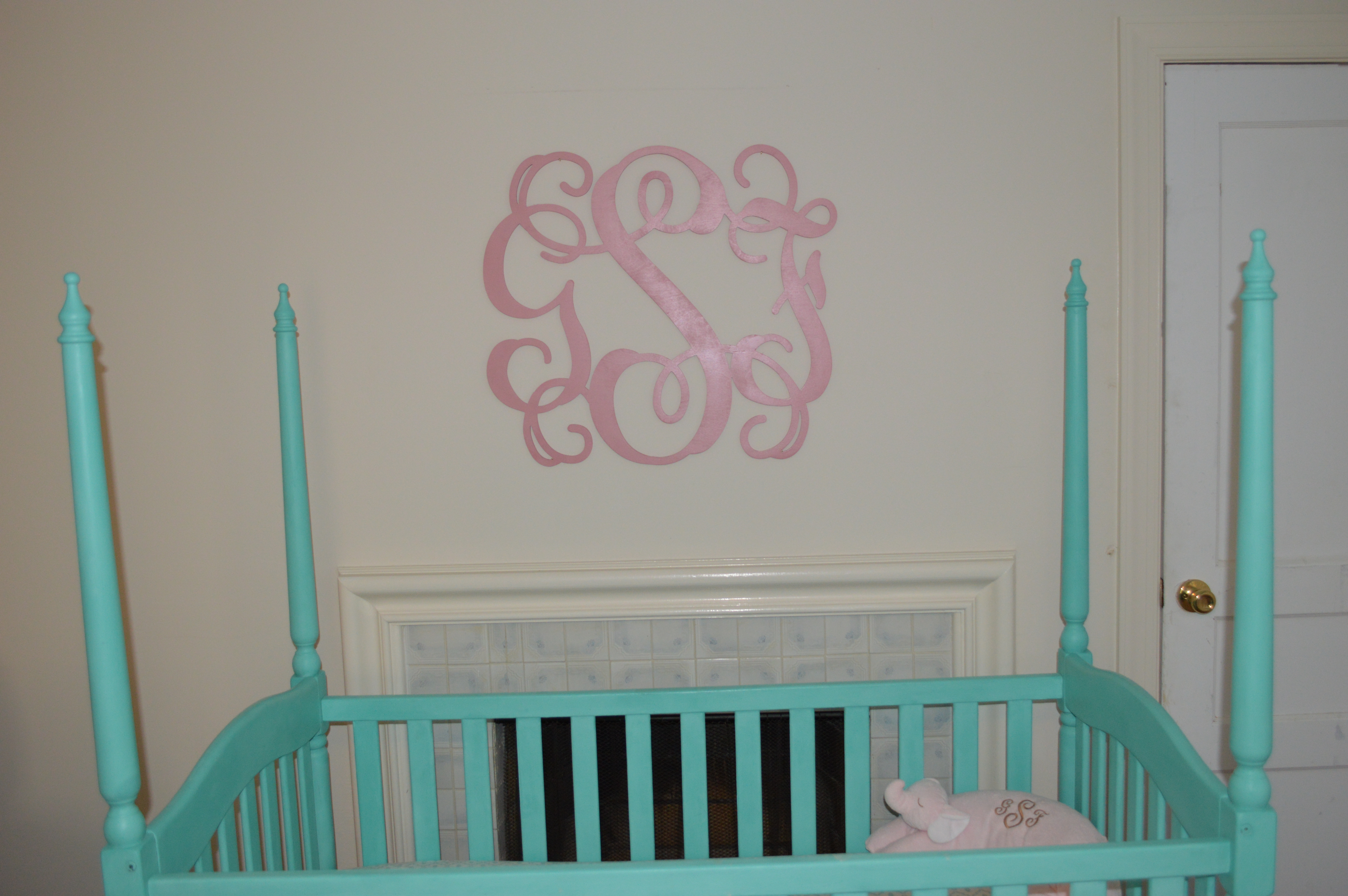 I love the pink accent that added to her room but wanted to give it a touch more pink– just a hint to tie it all together.

SO… to spray paint a brass chandelier, here’s what I did:

Step 1: I removed the lightbulbs and plastic “candlesticks” underneath the bulbs. 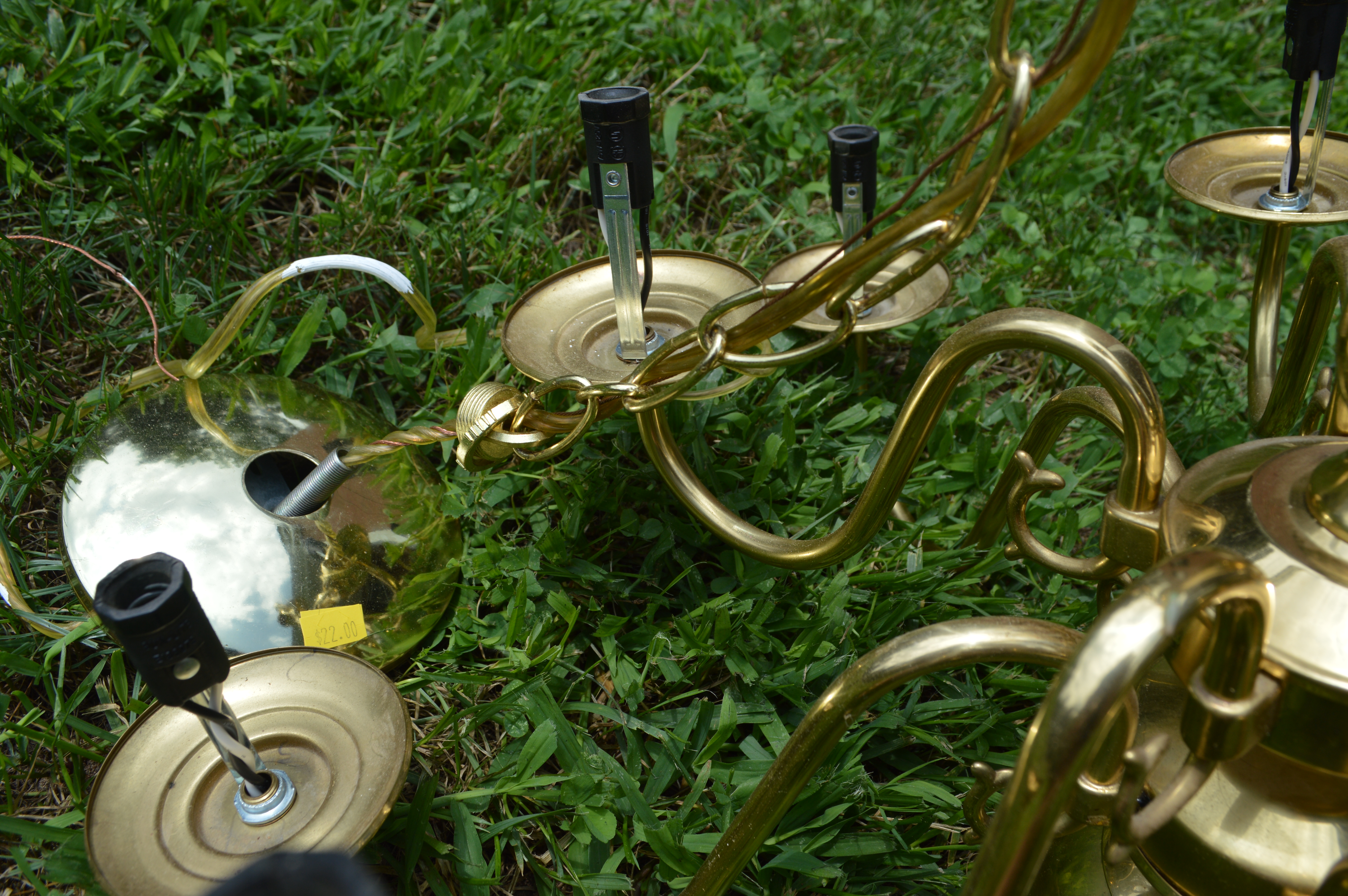 Step 2: I covered over the electrical part with tape.  I only had clear packaging tape so you can’t really see it in the photos. 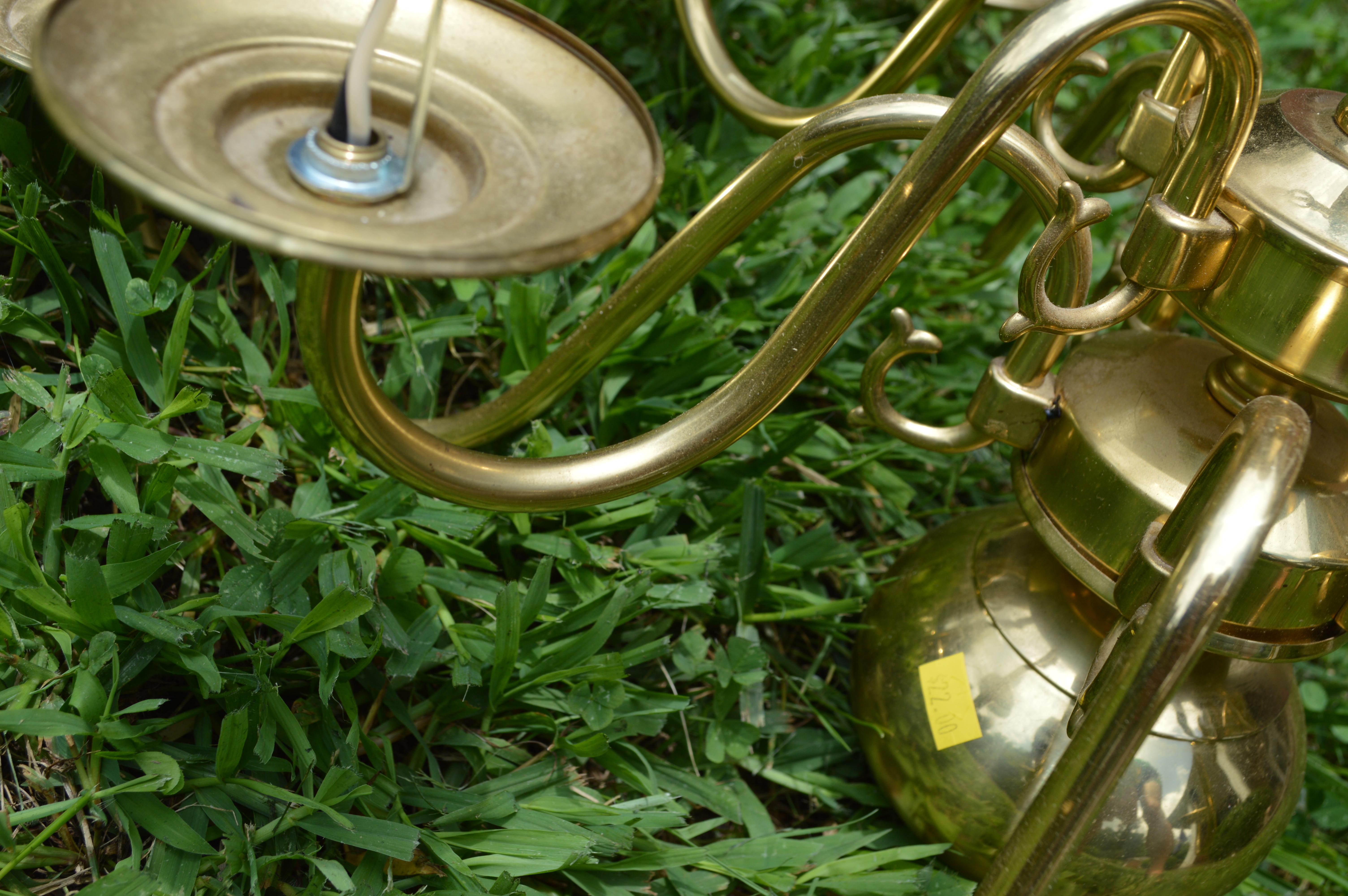 Step 3: Buy a spray primer.  I bought Rust-Oleum’s “flat white” for a few bucks and it did the trick nicely!

Step 4: Dust off the chandelier, lay it out on a surface that can get spray painted (I used old grocery bags), and have at it! 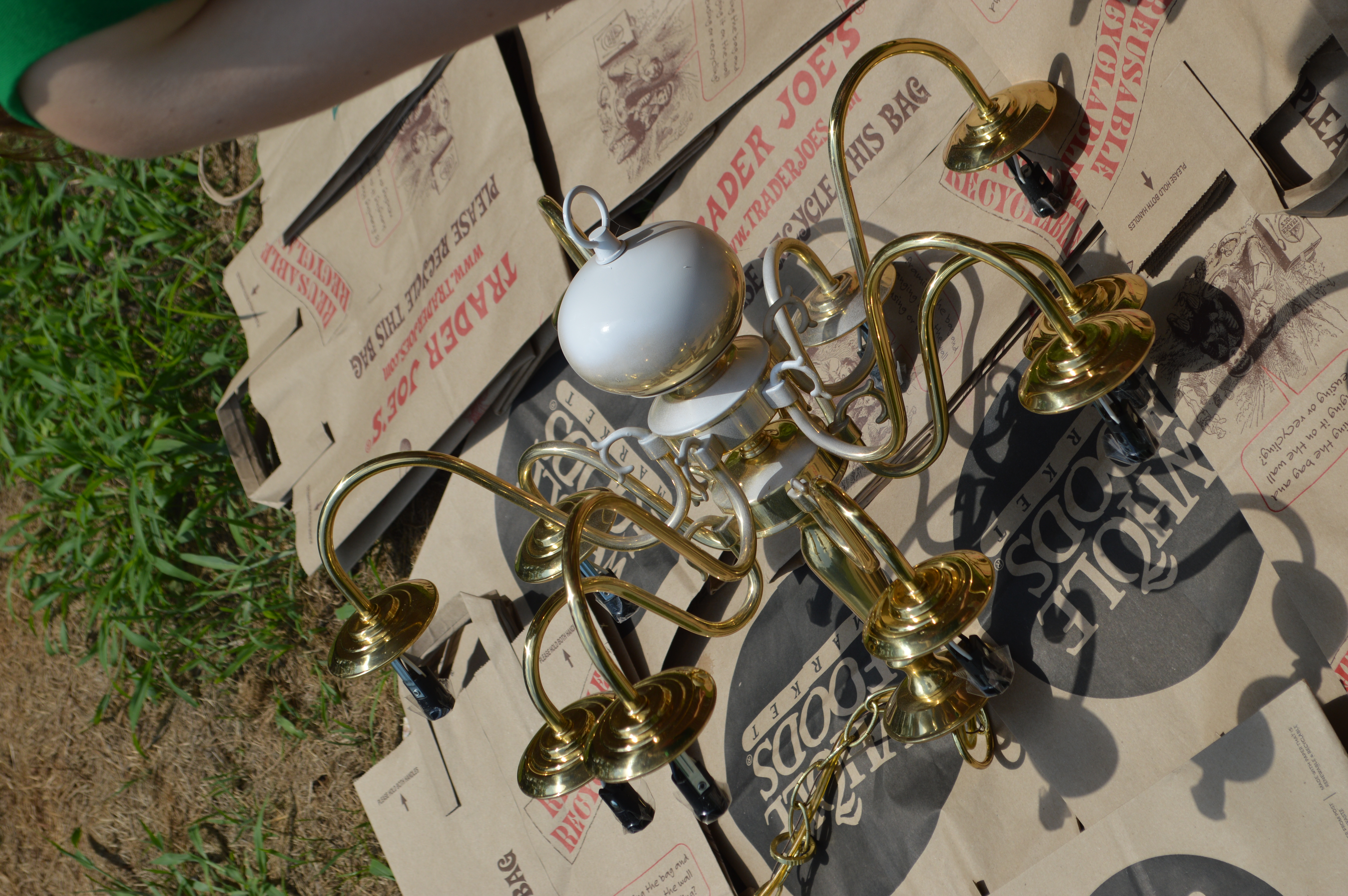 I found it was important to do multiple coats (letting each coat dry for 3ish minutes, although I don’t think it needed that long) and slightly changing the angle each time.  This required repositioning the chandelier a lot but I kept finding parts I had missed, so it was worth it. 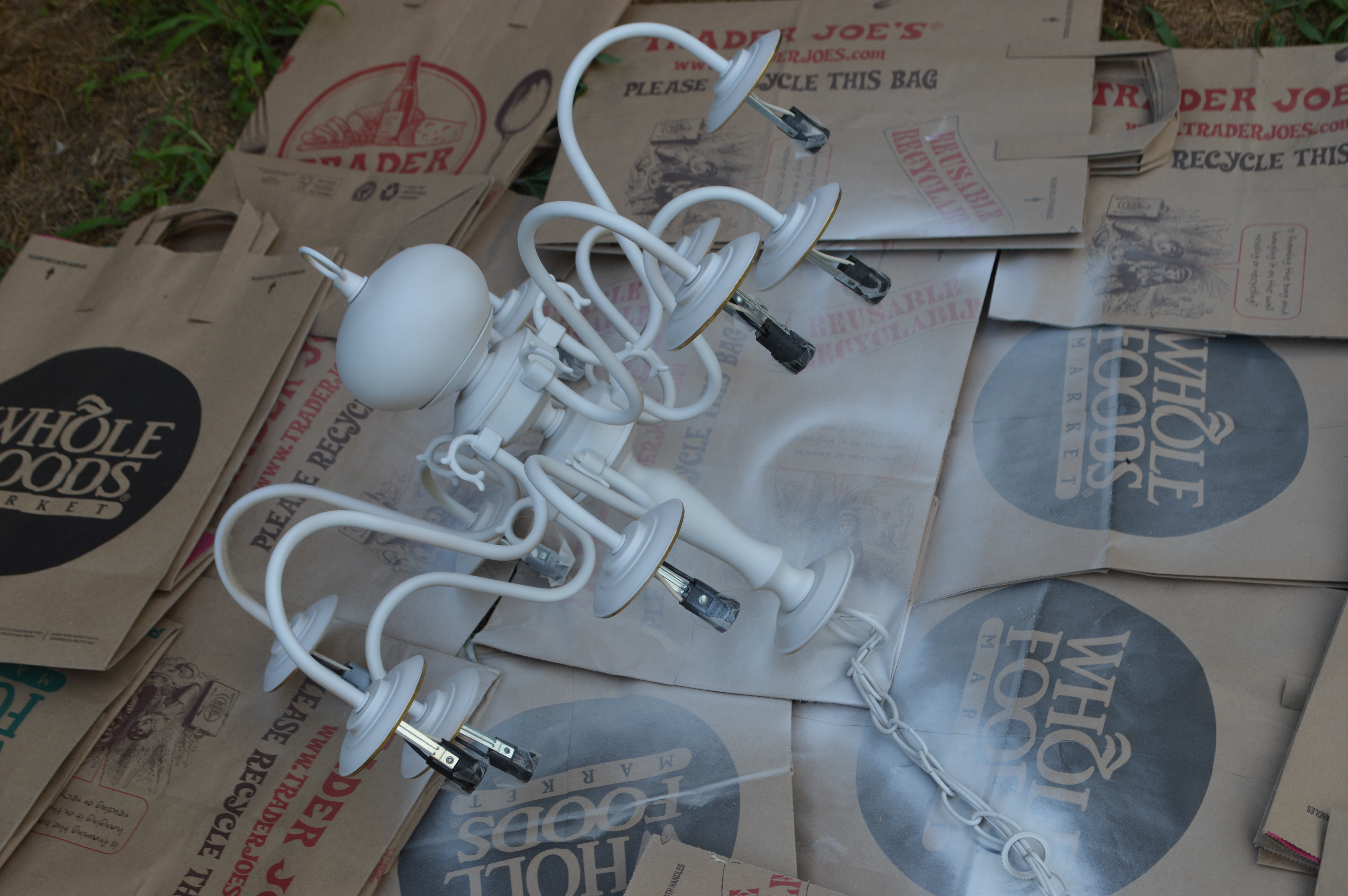 Step 5: Unfortunately I don’t have any pictures, but after I primed the chandelier, I let it sit for a few days (just because I didn’t have time) and then I spray painted it all pink.  I think it took 5 coats total.

Step 6: Reattach the plastic candlesticks and lightbulbs, then hang! 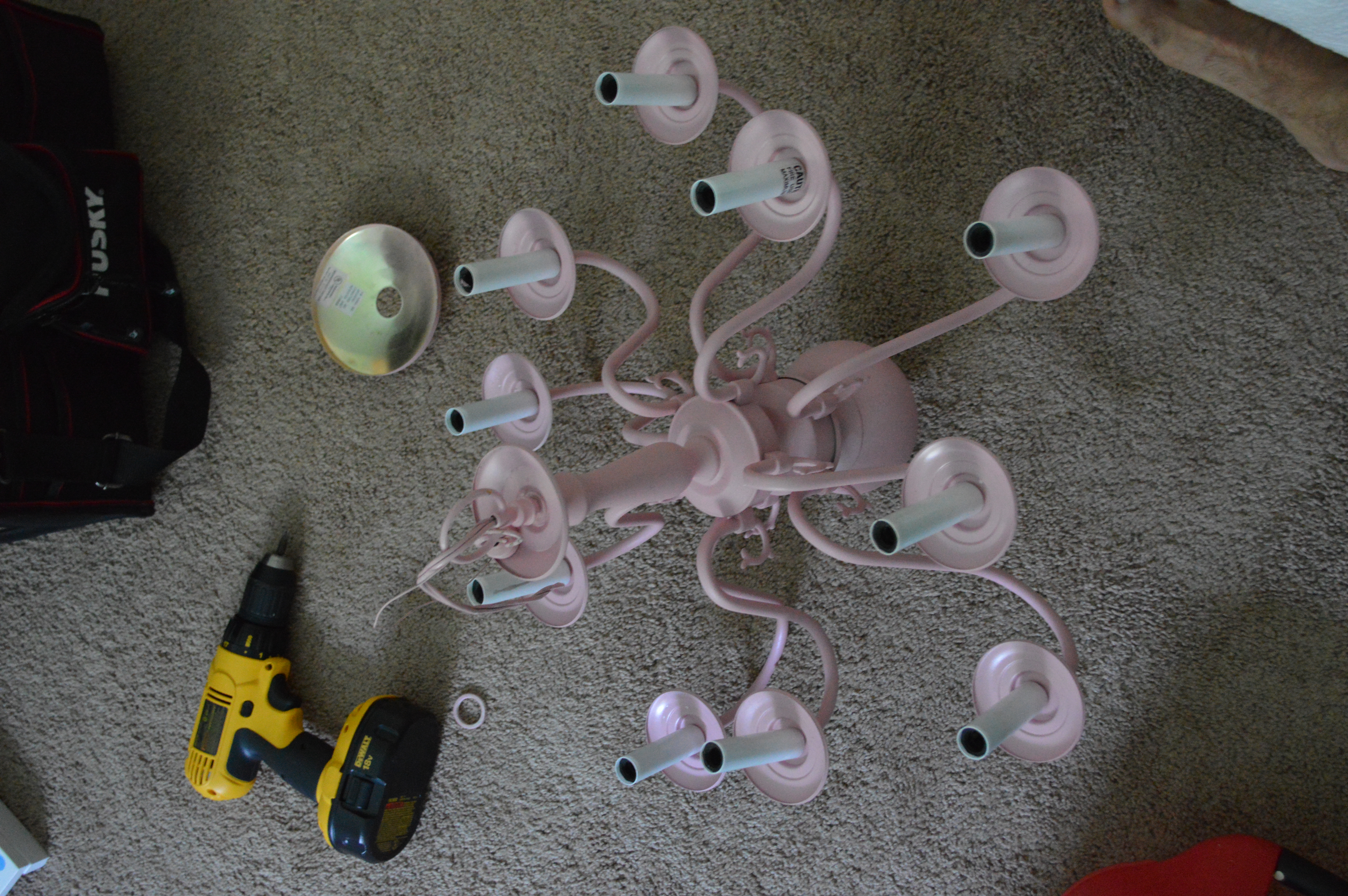 David took down the ceiling fan that had been hanging… 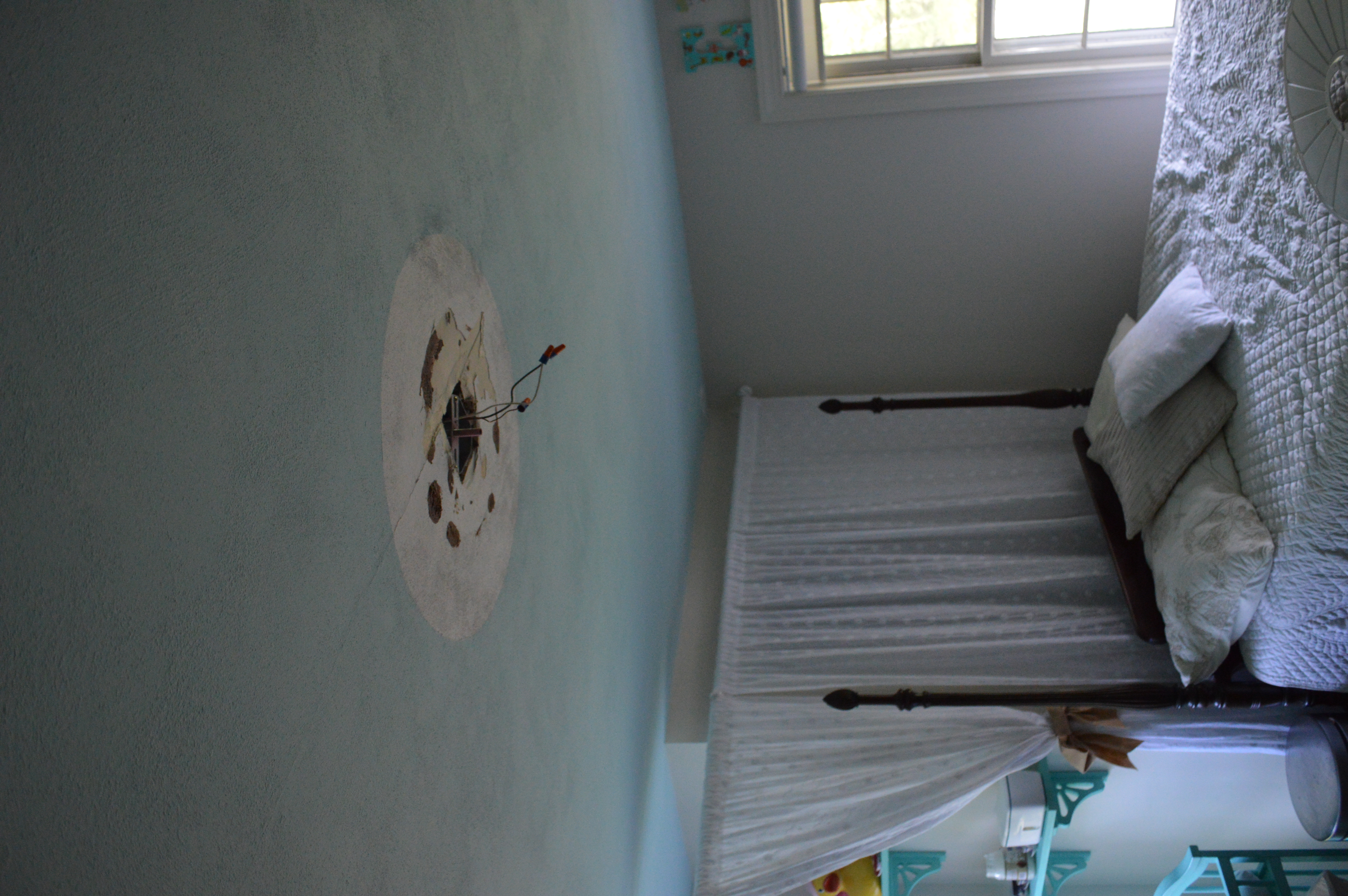 And next thing I know, he had put up the new pink chandelier! 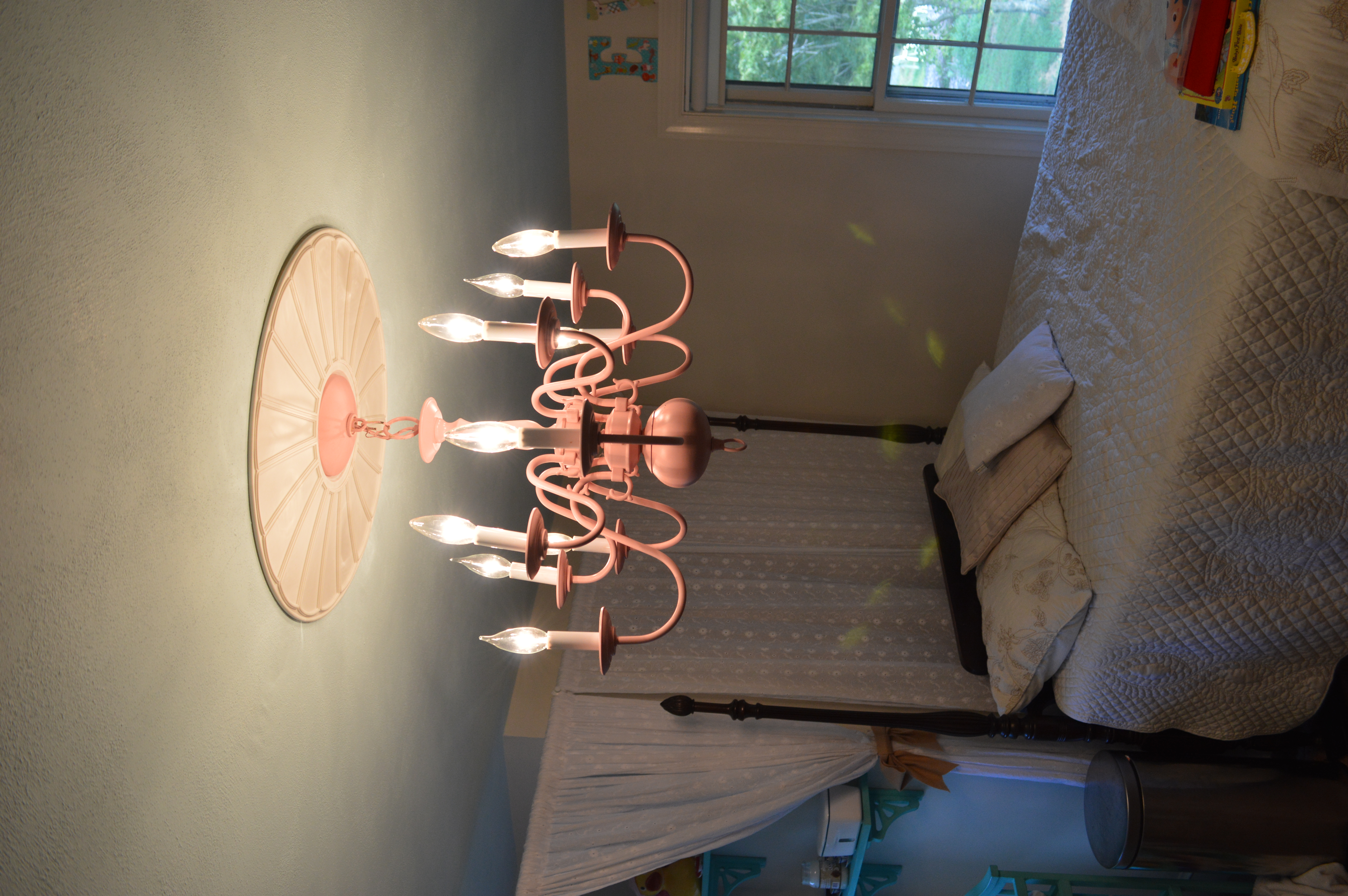 I think Evie liked it a lot, too! 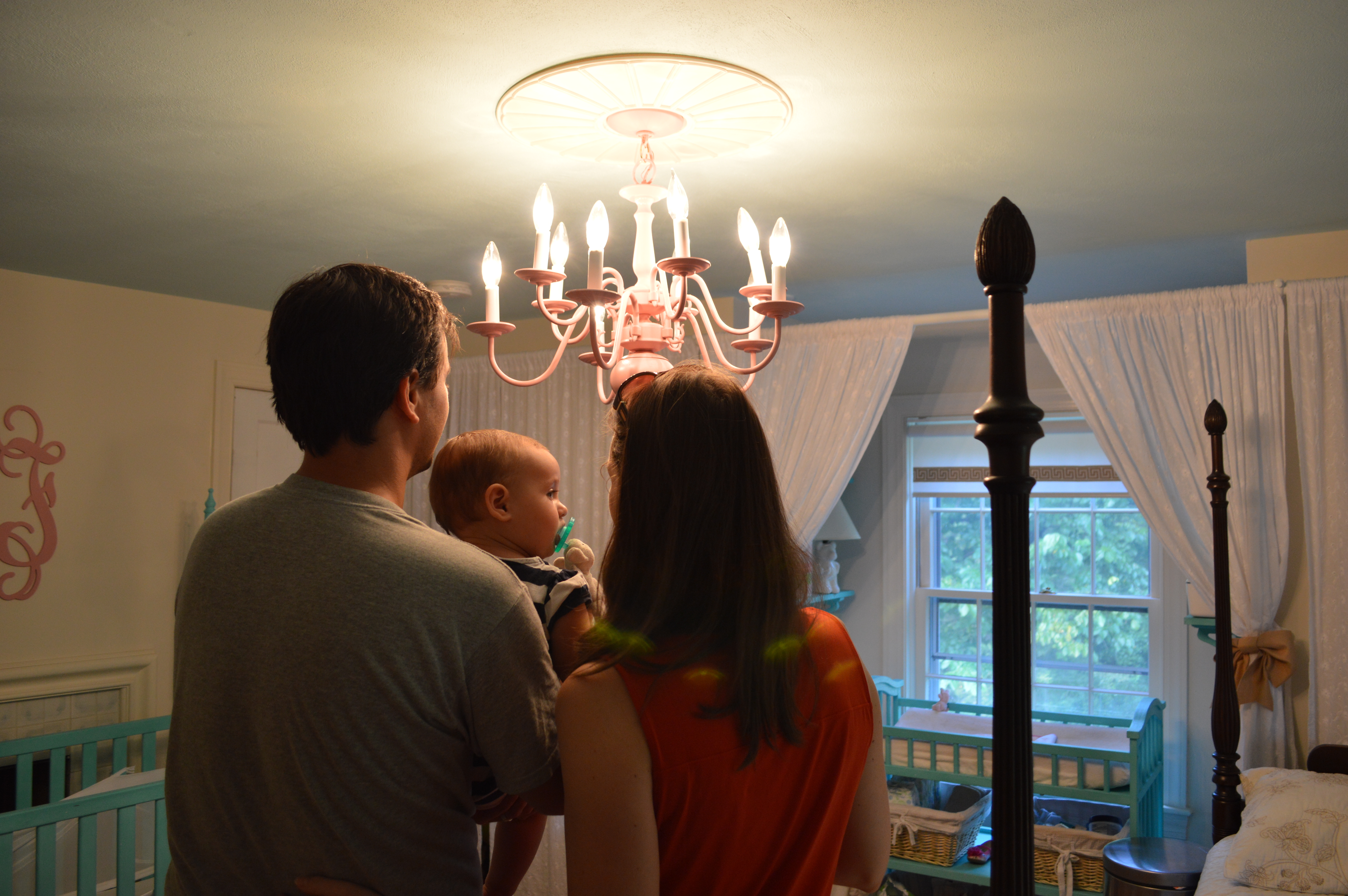 As you can tell from the picture below, the four poster bed works well with the chandelier.  It seems more classic, I guess. 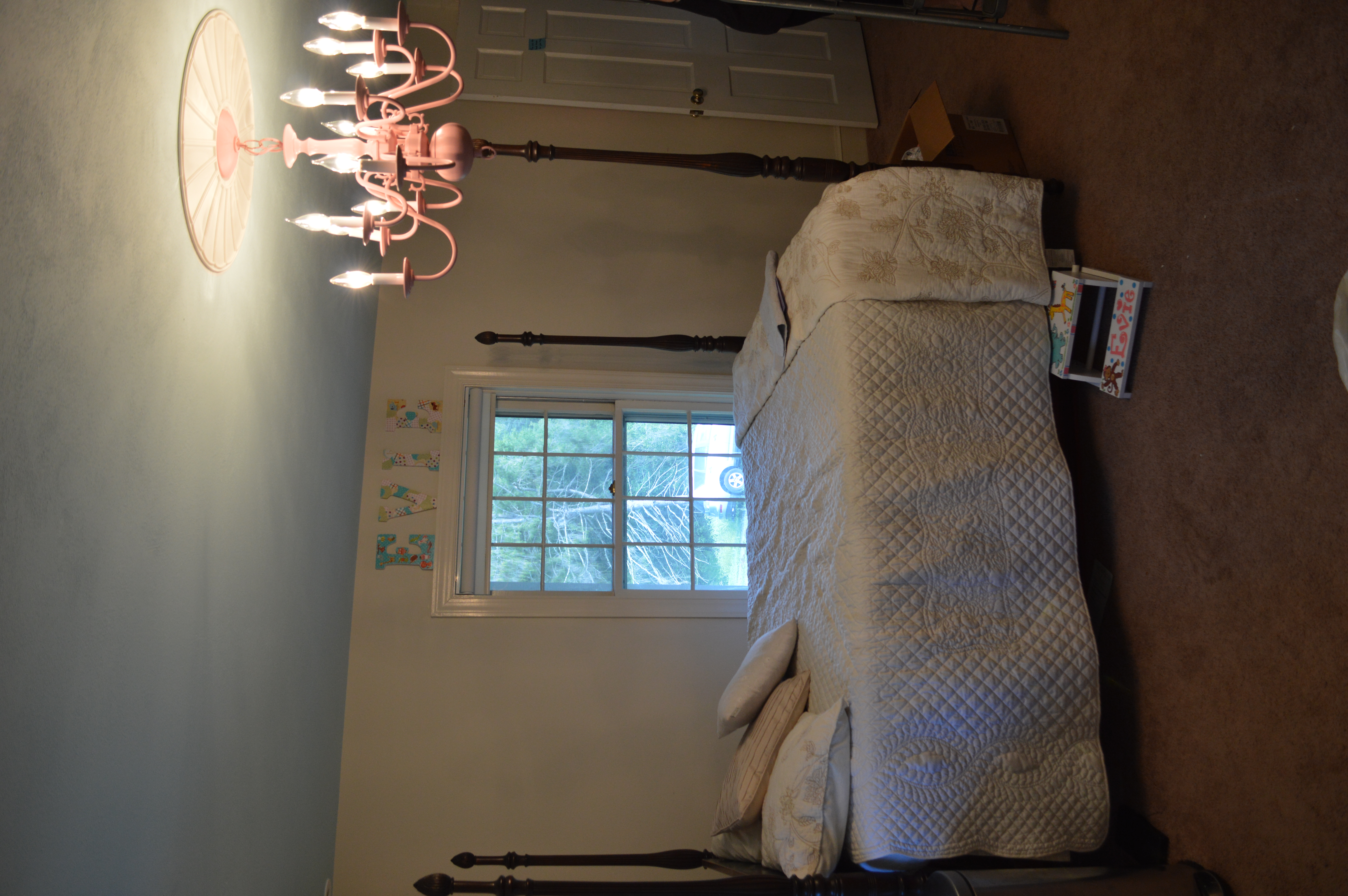 Below is a picture of the monogram with the chandelier.  Perfect!  🙂 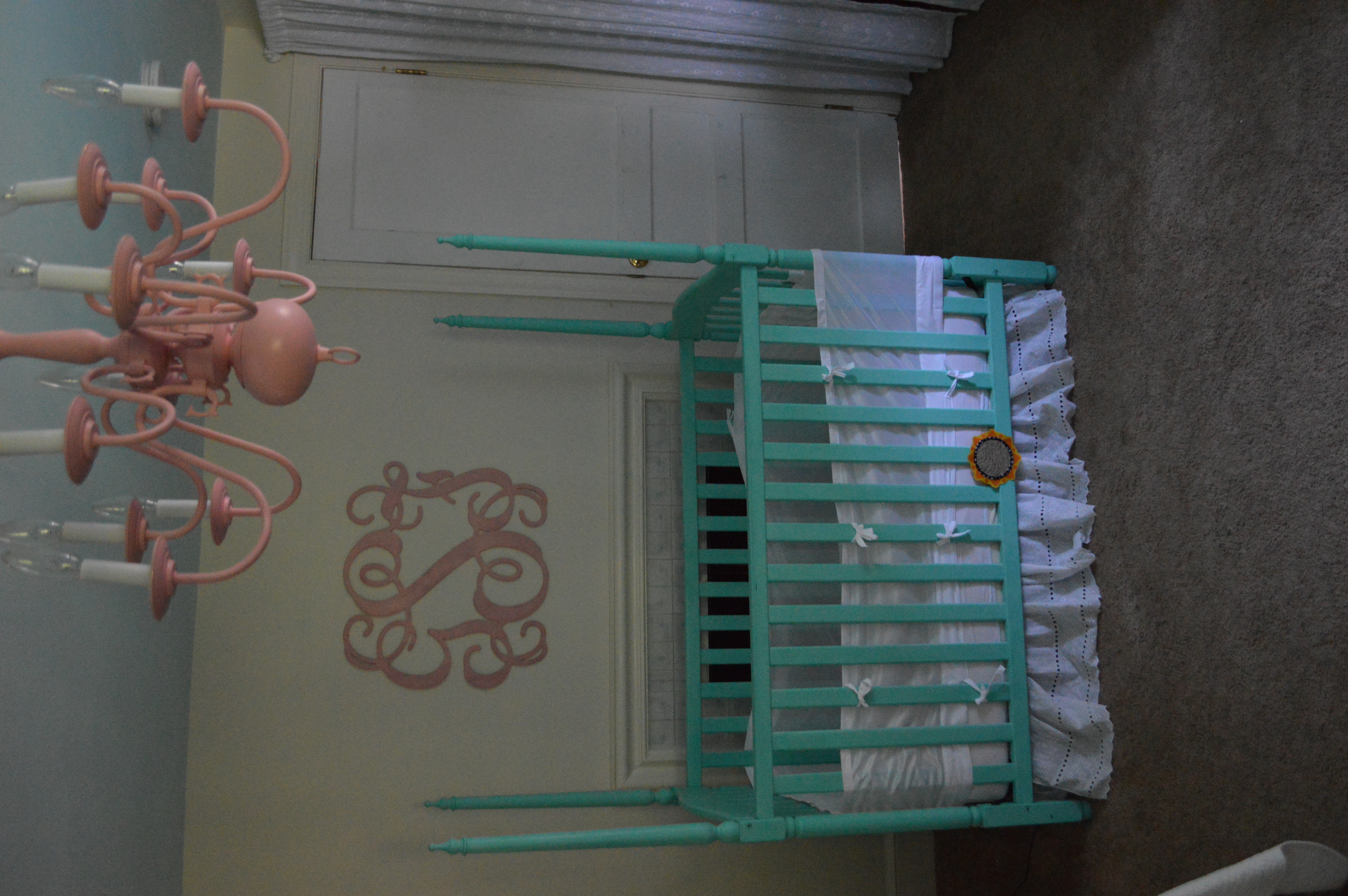