With Lynne out of town for two straight weeks for work, I thought about how nice it would be to surprise her with Christmas lights for our first holiday season in our new house!!  The front porch, I thought, would look best all lit up with holiday cheer, so I went about devising a plan: white lights spiraling up the three front columns with more white lights along the eaves.  Now the big problem: how does just one person go about spiraling lights up columns?  Well, the answer is slowly and surely 🙂

To get the job done, I needed six strands of lights (I bought eight just in case), a painter’s ladder to get up two stories, a staple gun (ours is light weight, but a heavy duty one would work best), and an outdoors extension cord.  Now, let’s get to it.

First thing I did was plug the lights in because I’ve always found it easier to arrange lit Christmas lights.  Then you have to start the spiral, which I prefer to do with an anchoring staple.  You may have already realized that what goes up must come down after the holidays and naturally want to shy away from using more staples than you have to.  But having that first light be anchored down and stable I have found to be very valuable for many reasons.  Now the method used to staple the wires to the column will vary depending on your staples; mine were light weight and short, so I had to isolate single wires for the staples to stay in.  I have used heavy duty staples before, and heck, you have to be careful not to staple your sweatshirt to the wall with those!  So put that first staple in. 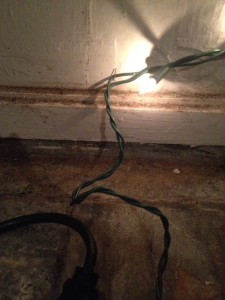 While you are standing on the ground, you can pretty easily walk around the column and feed the lights up as much or as little room between rows as you want.  I would say mine were about 18 inches apart, but I have to admit that I didn’t actually measure them; there are just too many spirals to be too precise about.

Once you get to a point where the lights are almost out of your reach, you need to start using the ladder. 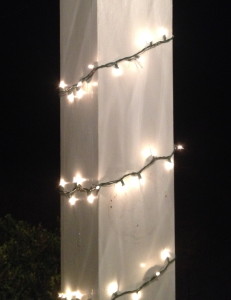 Then staple the lights near the edge of the column for square columns (like ours) or as high as you can get it on a round column.  From this point on, you will be alternating the ladder from one side to the other, so choose surface where you staple on the side opposite to where you are about to put the ladder. 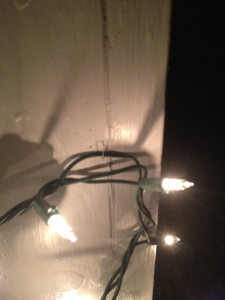 Now here’s the key: dangle the extra lights so they hang around the side of the column (you can usually kind of hook the strand on already hung lights).  This is so important because it’s what allows you to grab the strand when you’re up on the ladder next!  Now, set up your ladder on the side opposite to the staple you just put in. 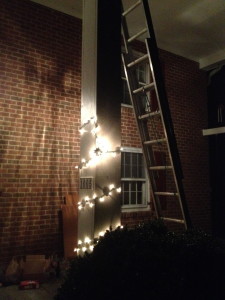 Climb up, grab the strand that you hung in easy reach on the side of the column, wrap it around in the next part of the spiral, and put in another staple close to the corner (remember to place the strand in a good position). 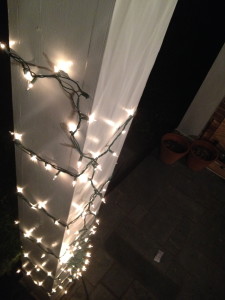 Now is when you reset your ladder on the other side of the column and repeat this ritual until you make it to the top!  But there is another hitch: if you have to string two stands together, you have to account for that two foot lightless gap where the second strand starts.  But have no fear, it’s actually pretty easy to just double the strand back on itself!  Doing this doesn’t make any progress up the column, but it does eliminate an ugly gap in your lights. 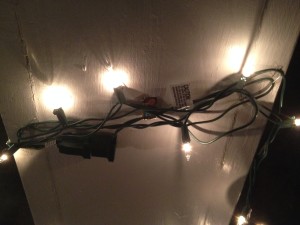 Here are a few shots of the second column as I had to move the ladder back and forth: 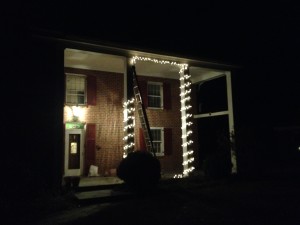 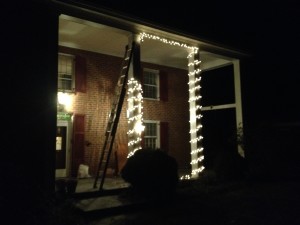 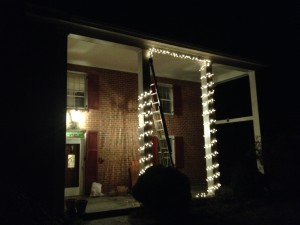 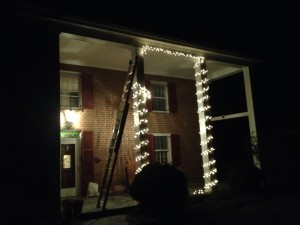 Once you get to the top, you put in another anchor staple or two (since you are changing directions / patterns), and repeat the same concept again, but this time across the eaves of the house instead of around a column. 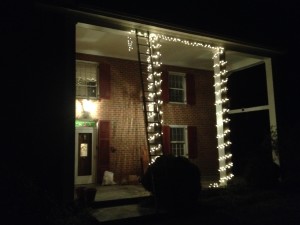 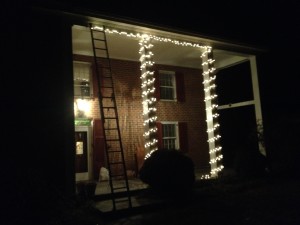 I put extra staples in the top lights because, if they started drooping, it would be a pretty big pain to get the ladder back up there to fix it. 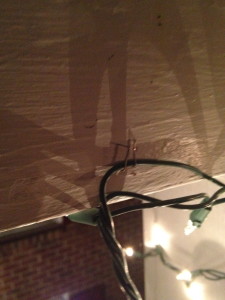 And seriously, take this one slow.  I don’t care where you live, the roof is a long way up and falling from it would be terrible!!  Now for the finished product… 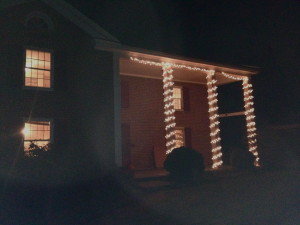 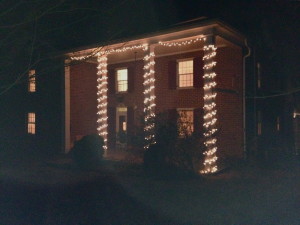