Confession: the work described in this blog post was actually done a few months ago (when I was pregnant, before Evie was born).

The tile floor in the kitchen had seen much, much better days.  The air conditioning holes in the floor (see below) were totally gross and the tile surrounding them was chipping.  The cold weather last winter contributed to the tiles cracking even more, and with a baby soon to be crawling about these floors, David and I decided they didn’t need to stick around. 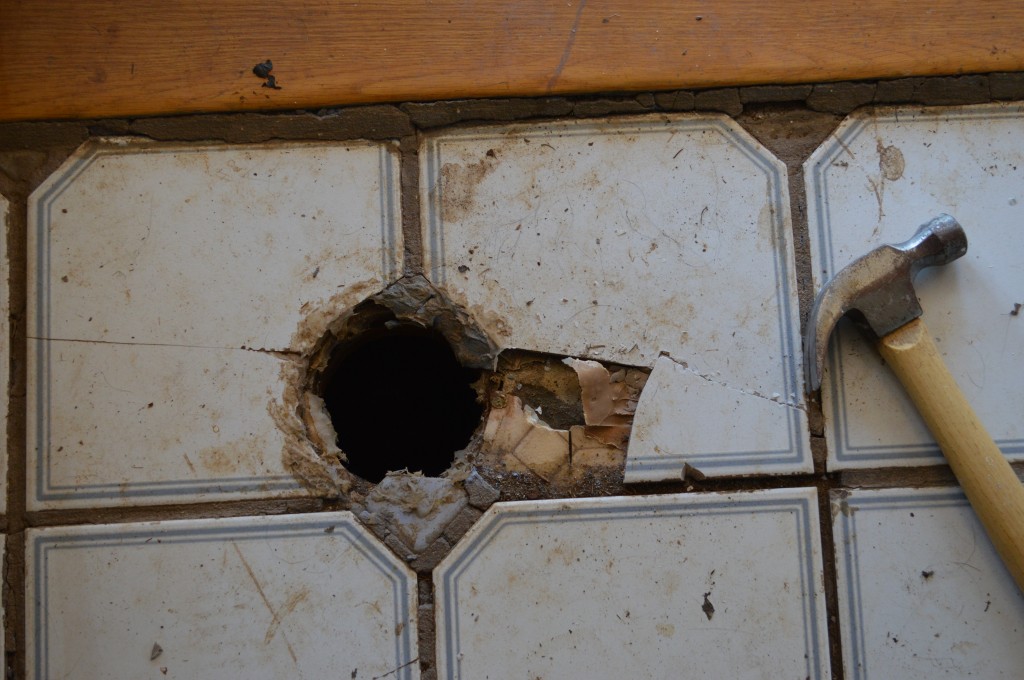 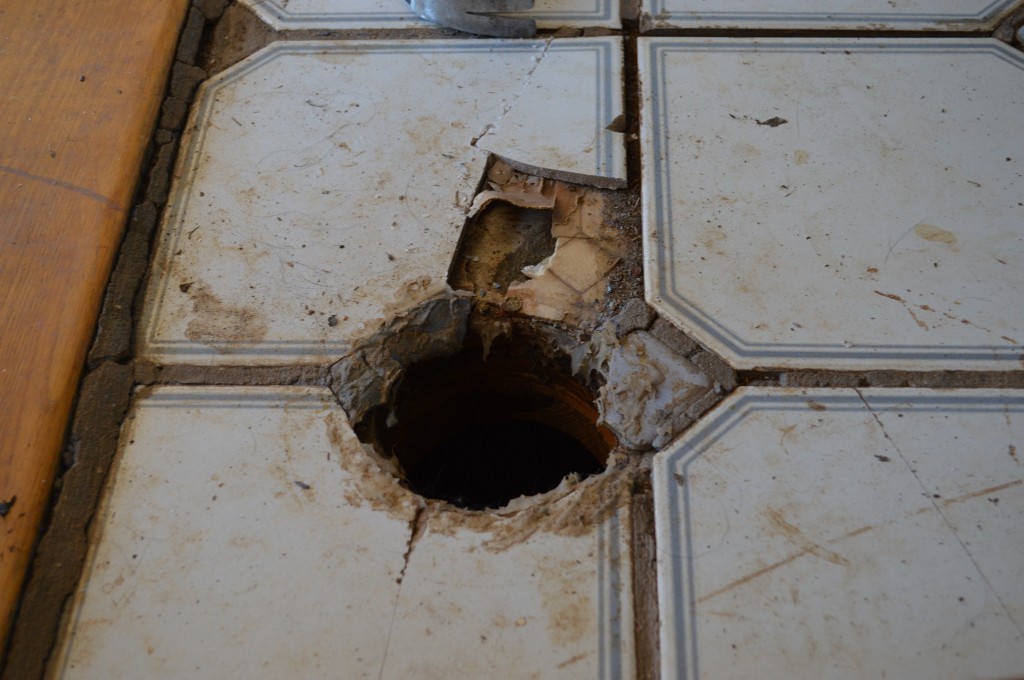 So David got himself a hammer and a chisel and started chipping away at the tile.  Underneath, he discovered more tile.  Except then we realized it was actually a sticky vinyl-linoleum-type fake-tile, which was annoying to remove.  Underneath that, he found either the wood or stone sub-floor.  Part of the kitchen (the part by the family room and hallway where the fireplace was) had a stone sub-floor; the new part (where the kitchen counters are) had a wood sub-floor.  Those two sub-floors, we soon discovered, were not level.  Ha. 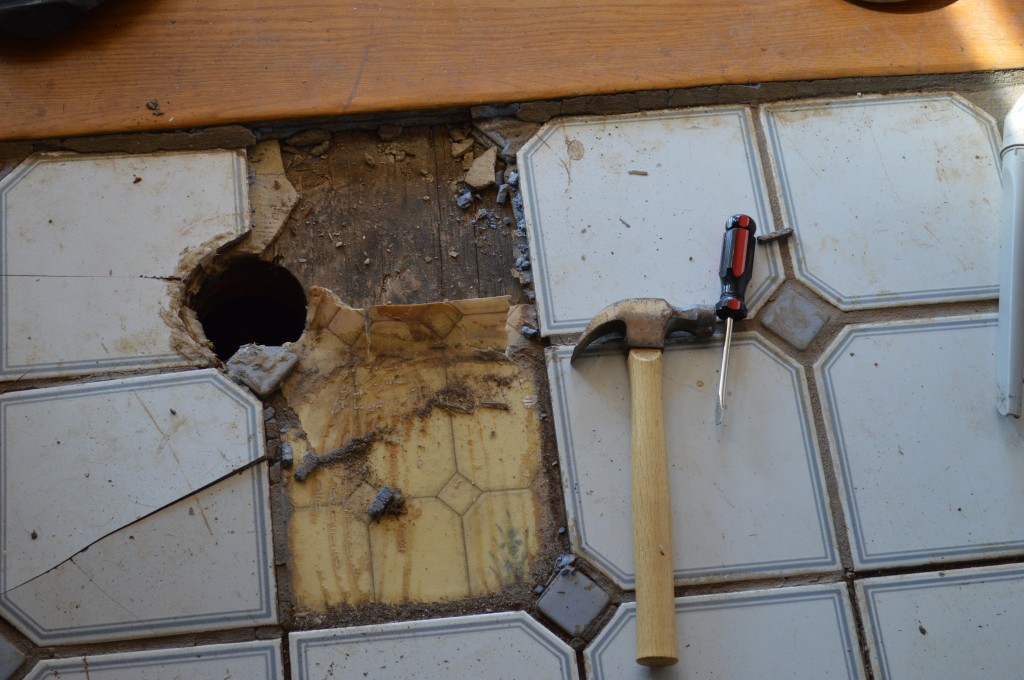 So here is the kitchen (with dirty dishes on the side, deal with it) with the cracked tile floor intact: 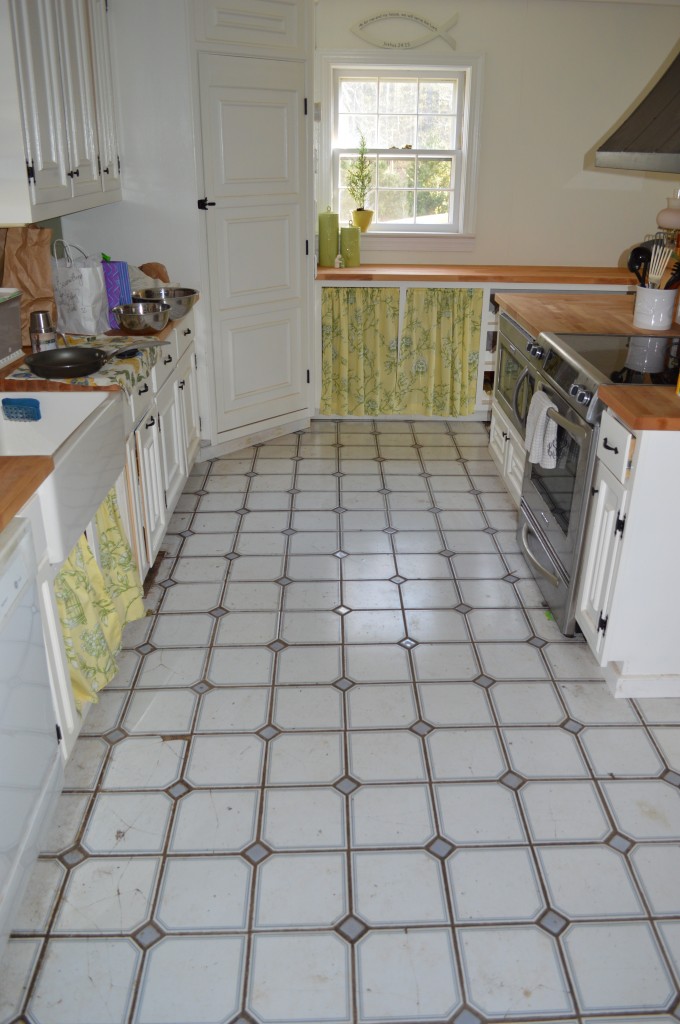 And here it is plastic sheeted-off to reduce the dust.  For a split second we were worried about asbestos but thankfully we know the children of the folks who owned this home before us, so David asked if they used asbestos and they resolutely said no.  Phew!  Most homeowners don’t have the luxury of asking what was used.  We were lucky. 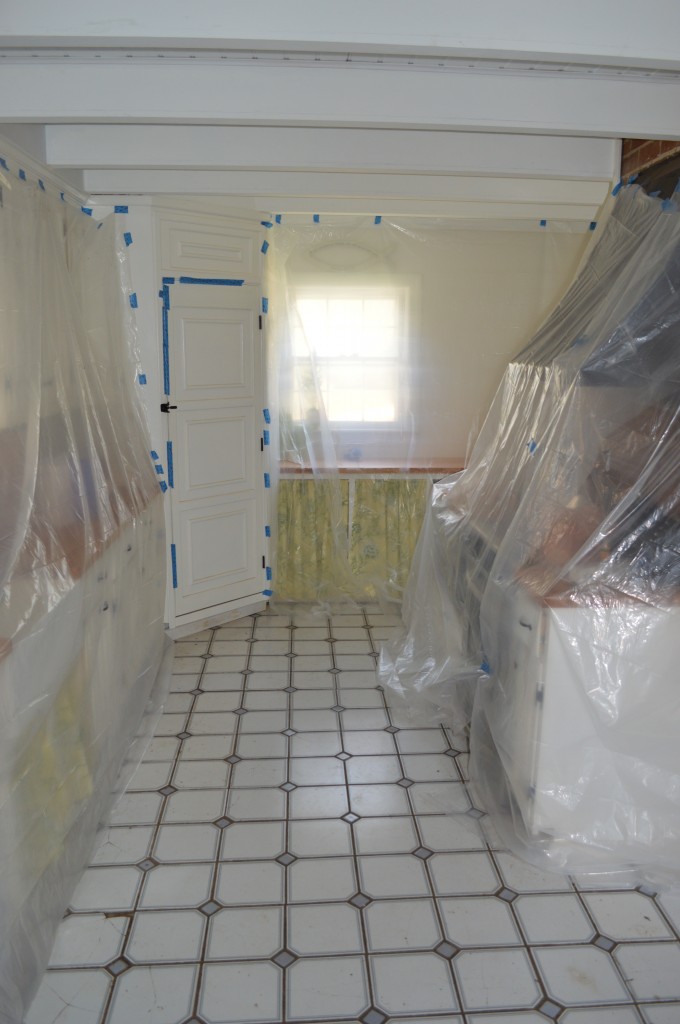 Here’s a pic of the tile removal in process: 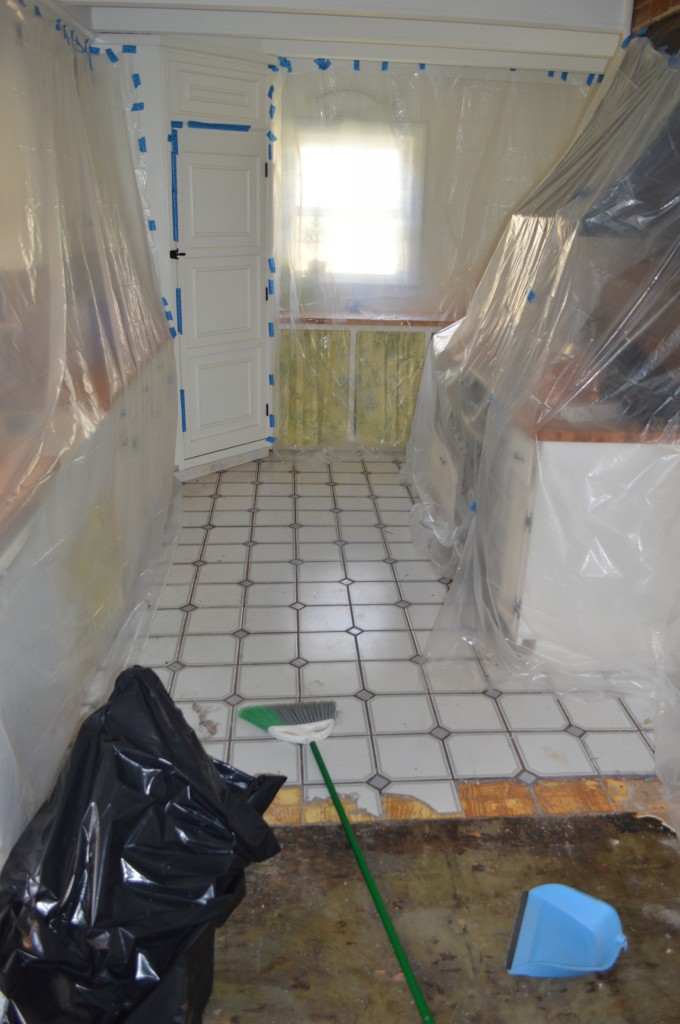 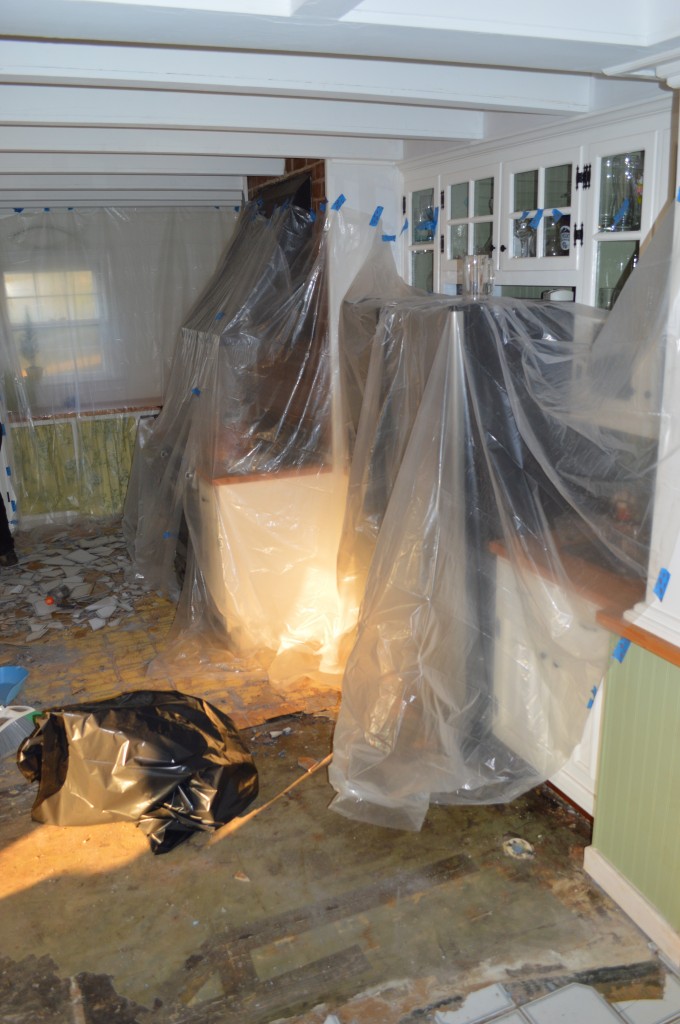 David was such a trooper and did the whole thing himself without any complaints.  I sure wouldn’t have acted that awesome-ly, believe me! 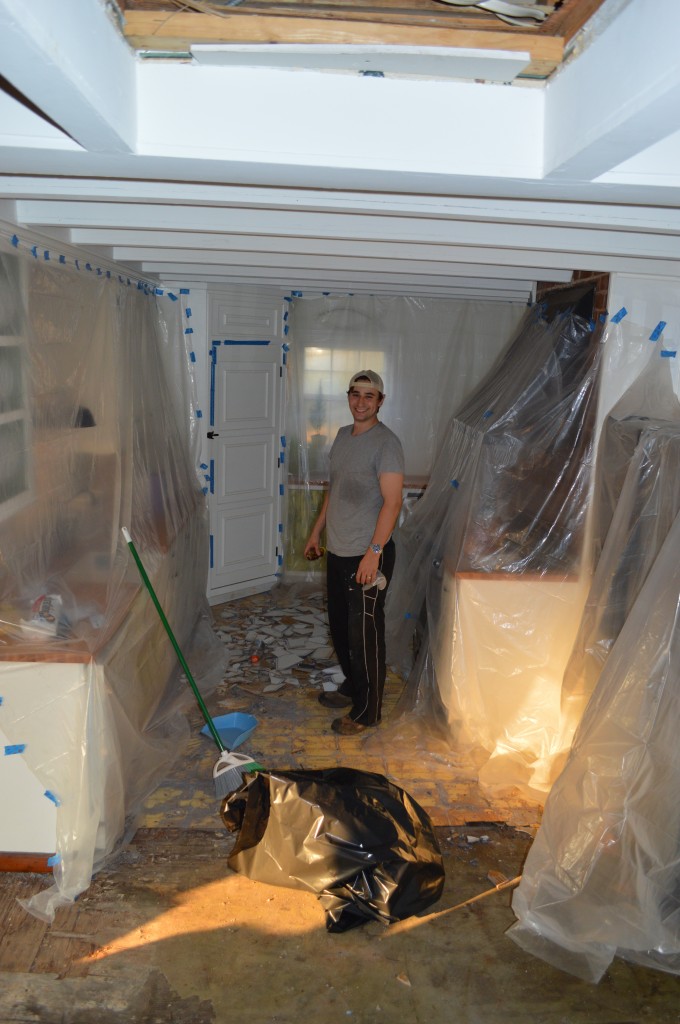 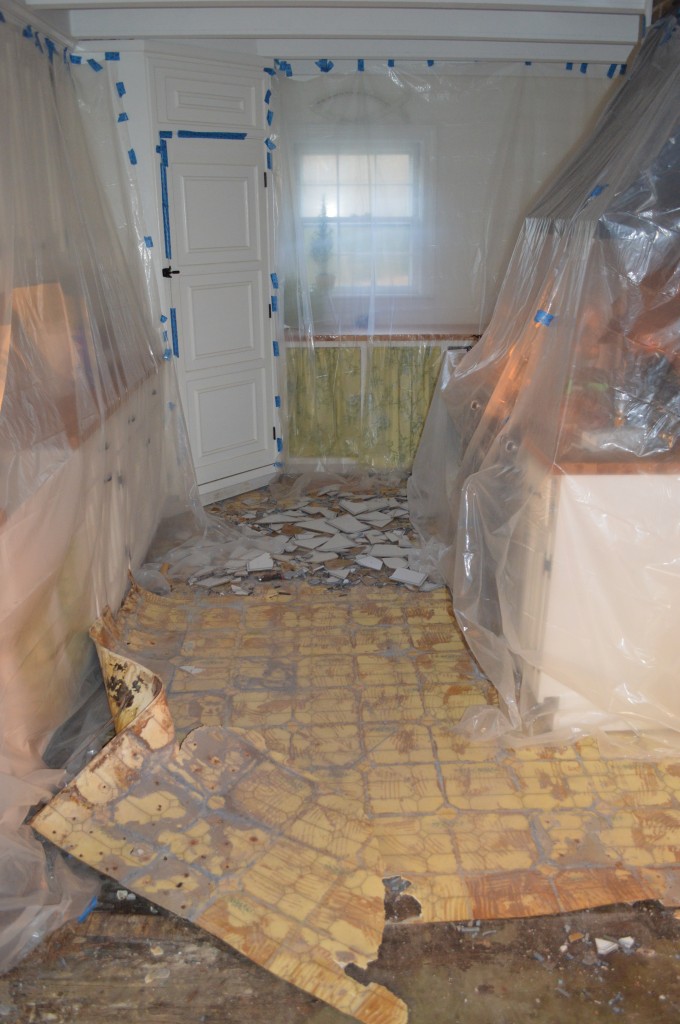 Turns out there really was no floor at all underneath the plywood holding up the fridge.  Yelp. 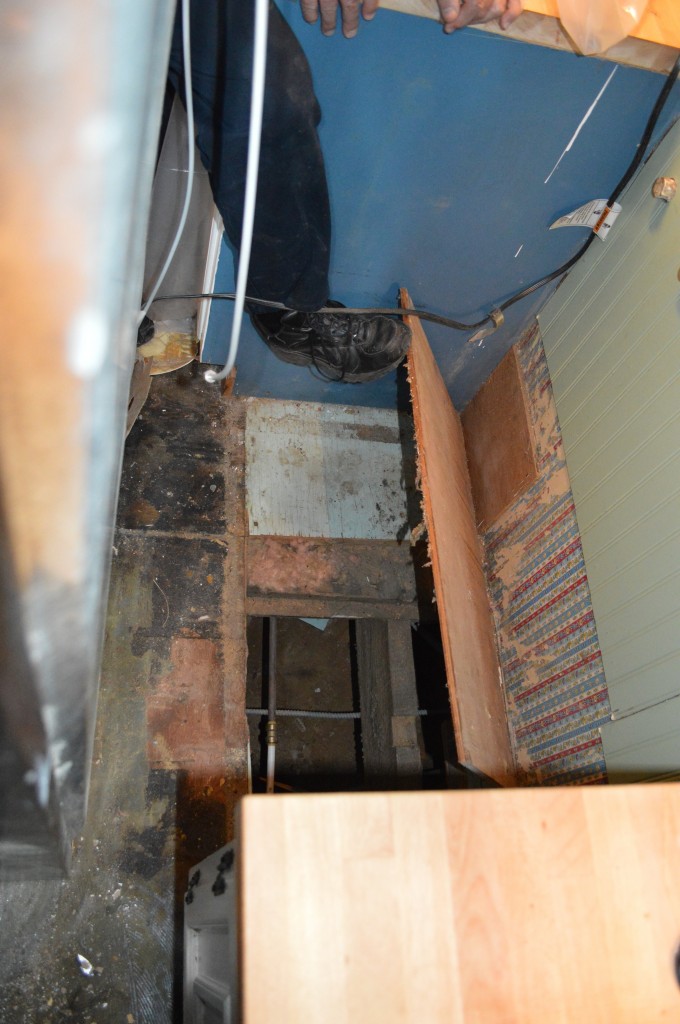 David’s dad was in town helping us with other projects this weekend (note: he is a master at taking down wallpaper), and here’s a pic of the two men in the floor-less kitchen!! 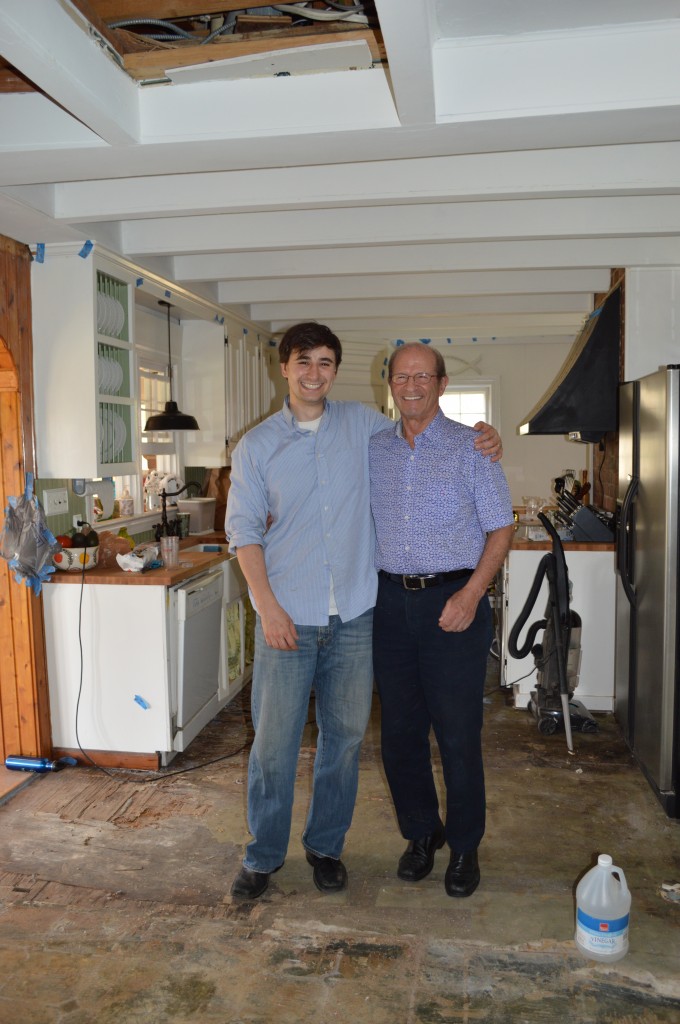 You can see the wood and stone sub-floors above.

It’s been fun perusing Pinterest and other sites to figure out what kind of floors to install… and stay within our budget, which is next to nothing at this point haha.  Keep in touch to see what we end up doing!  🙂