When Lynne first said she wanted chickens three years ago, I chuckled and thought “aw, that’s cute…No way!” Fast forward just over two and a half years, and guess who was scraping chicken litter out from the coop?!
My one bit of solace was that soon we would have delicious and healthy farm fresh eggs, and the whole thing would be worth it. Well, “soon” really meant we would be without eggs for about four months; all we / I had to show for our chickens was scraping chicken droppings…off of our back porch! Yep, we made a seriously rookie mistake when we put the chickens in the coop of giving them free range of the backyard.
I mean, who doesn’t want free range chicken eggs? We quickly found out that if given their druthers, the chickens would hang out on the back porch and do their business EVERYWHERE. On the swing, on the rugs, on the table… And still no eggs! 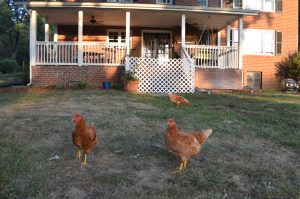 It was pretty simple:
Get a single piece of white, vinyl lattice (both cheaper and lighter than the wooden ones) and two small, white hook screws
Snip off a small portion of the top of the hook so the lattice can rest in it nicely
Screw the hooks into the posts at the bottom of the stairs
Hang that lattice right in that bad boy
Get your self a beer to congratulate yourself on a job well done
(Last step is optional)

Now our chickens can be trusted to roam free in the back yard, and there is a lot lower risk of them becoming chicken stew! 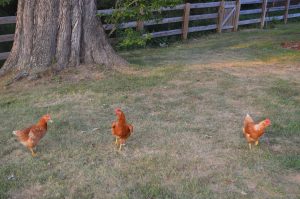 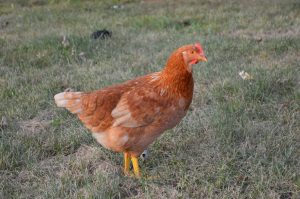 This past weekend, I went to the coop to let them out in the morning, and surprise surprise, I found no eggs in their coop 🙁 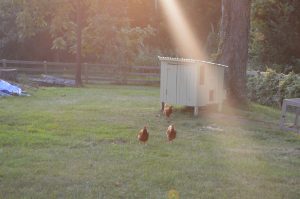 (By the way, we bought this coop made out of 2x4s from Craigslist for $200.  We ended up selling our other coop because we weren’t convinced of its quality… we’d already had to caulk the seams in its roof because it was leaking and it just didn’t seem very sturdy.)

But later that day, I was weed eating around the pool / deck, and thankfully noticed something strange in the tall grass… EGGS!!! For some reason, the chickens were laying their eggs in the grass around the pool area instead of their coop.
My shadow is pointing to the makeshift nest here: 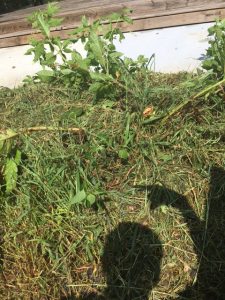 And in this nest were EIGHT beautiful, farm fresh, free range, organic, blah blah blah, eggs! That OUR chickens produced!!!
Don’t you just love how they aren’t all the same size? 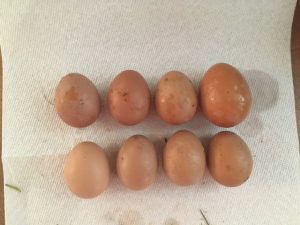 Let me tell you something, those eggs were phenomenal for breakfast the next morning!

But if you’re anything like me and just did the math, you are right: it totally is not worth it financially to pay for a coop, food, litter, and everything else just to get $3 worth of grocery store eggs. My wife’s excitement about having out own eggs, however, IS worth it 🙂

1 thought on “The Chickens Pay Their Rent…Finally!”