The farmhouse at Nash’s Farm in rural England sits on a beautiful, dreamy farm dating back to 1349 (yes, you read that right). Getting to tour this farmhouse in the English countryside is a real treat! The farmhouse structure we see today is presumed to have been originally constructed in the end of the fifteenth century. Amazing. It likely started off as a medieval hall with two bays and a giant fire in the middle (with a hole in the roof for the smoke). Up in the attic today, apparently you can still make out black smoke marks on the beams in the middle.

The farm is just off of an old Roman road connecting London to the coast of England. It doesn’t seem real, does it?

Over the years, the house has grown and portions have been rebuilt. The current owner told me she and her husband moved in while she was pregnant with her third baby and had two little ones to take care of– and they needed to renovate the kitchen too. Could you imagine? 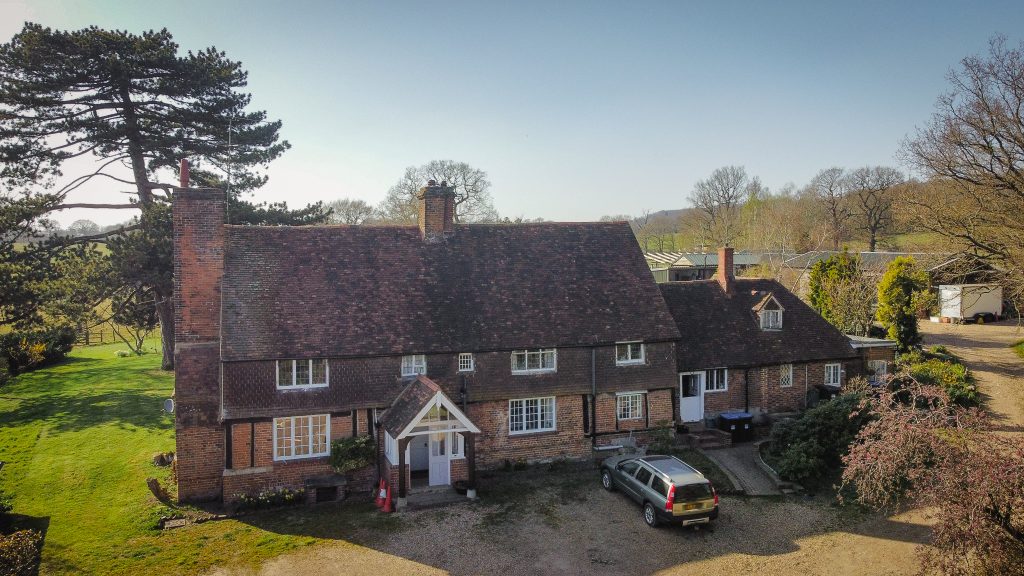 The house was partially rebuilt in the seventeenth century when the main chimney was added in the middle, but there are clues to its original medieval existence throughout. (The majority of the clues have to do with the construction of the wood beams.) 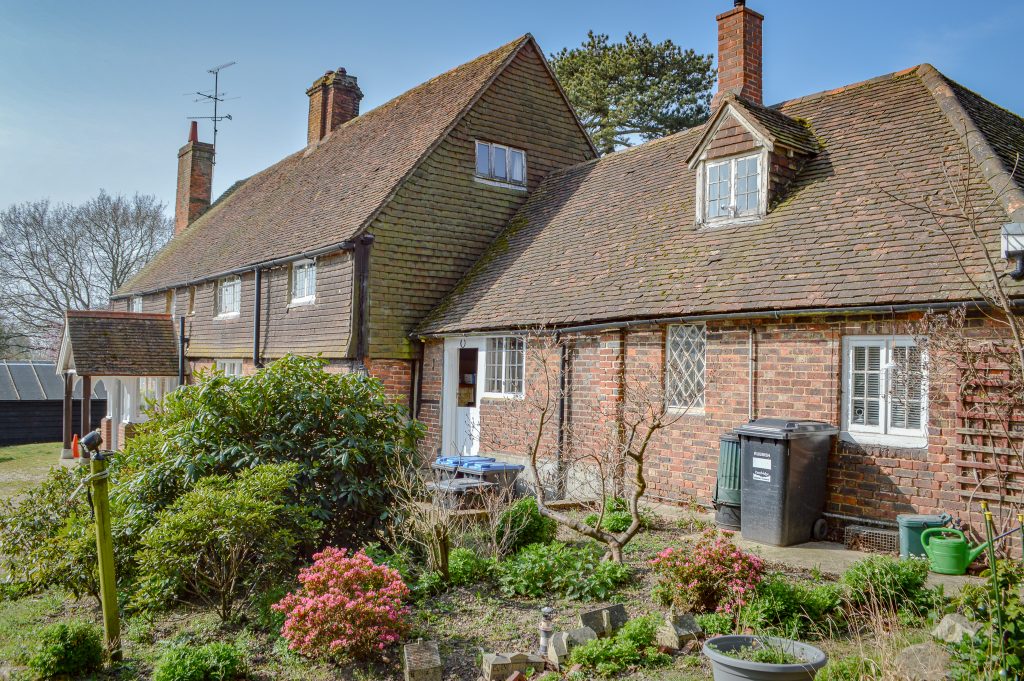 The side of the house has a charming kitchen addition which just oozes country charm to me. 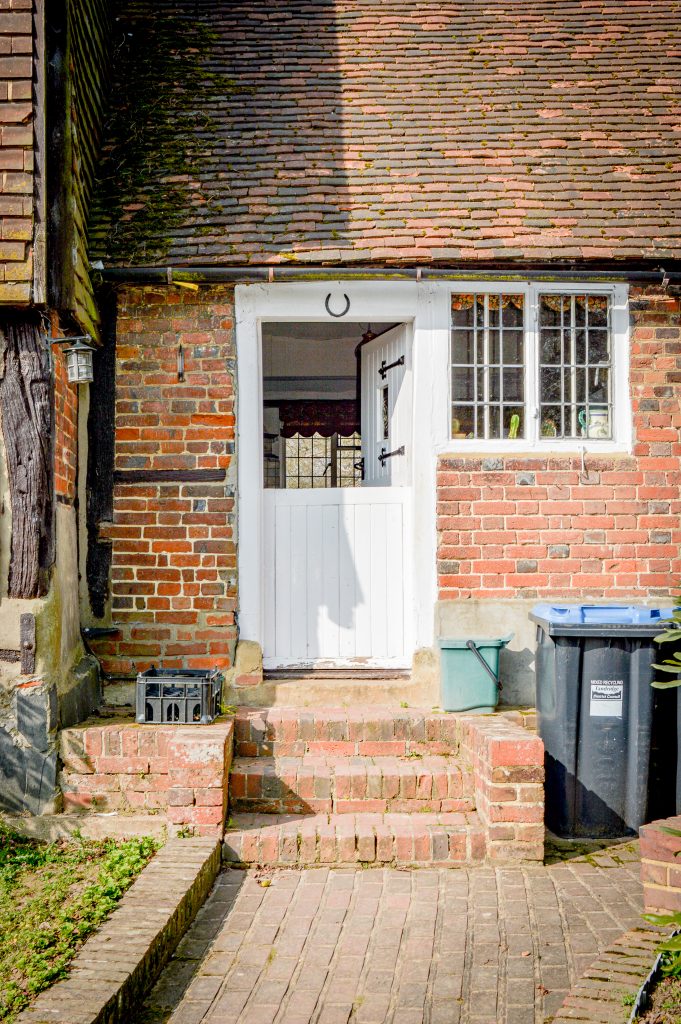 This Dutch door is the definition of picturesque. 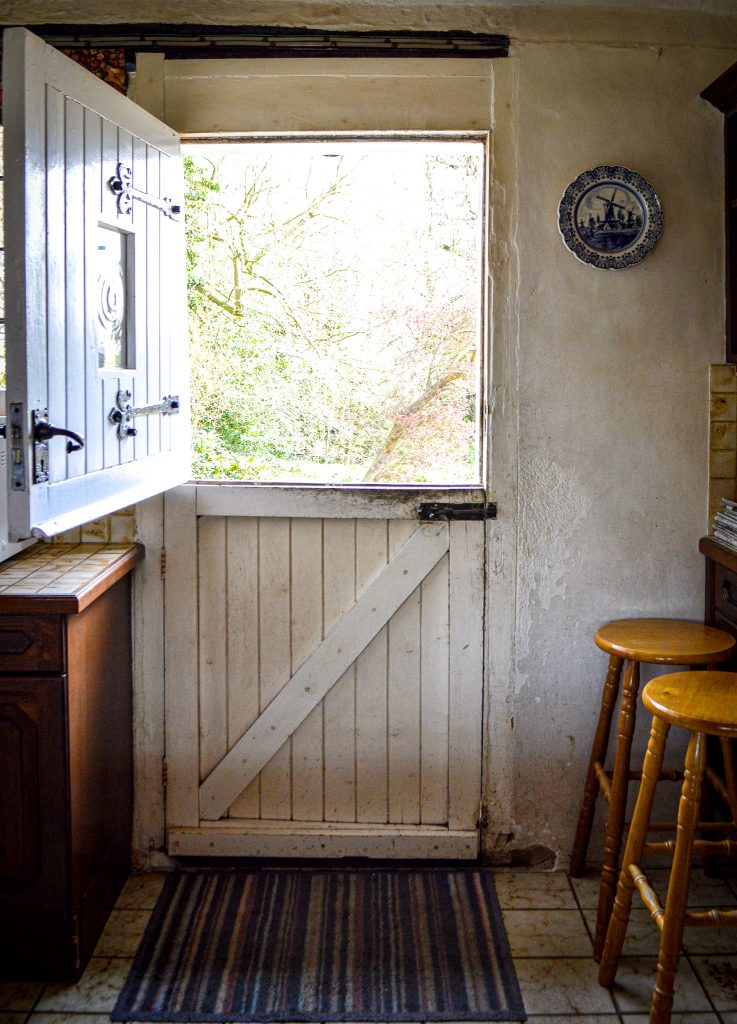 The kitchen has really high ceilings and lots of space. You can feel all the happy memories made in this room. 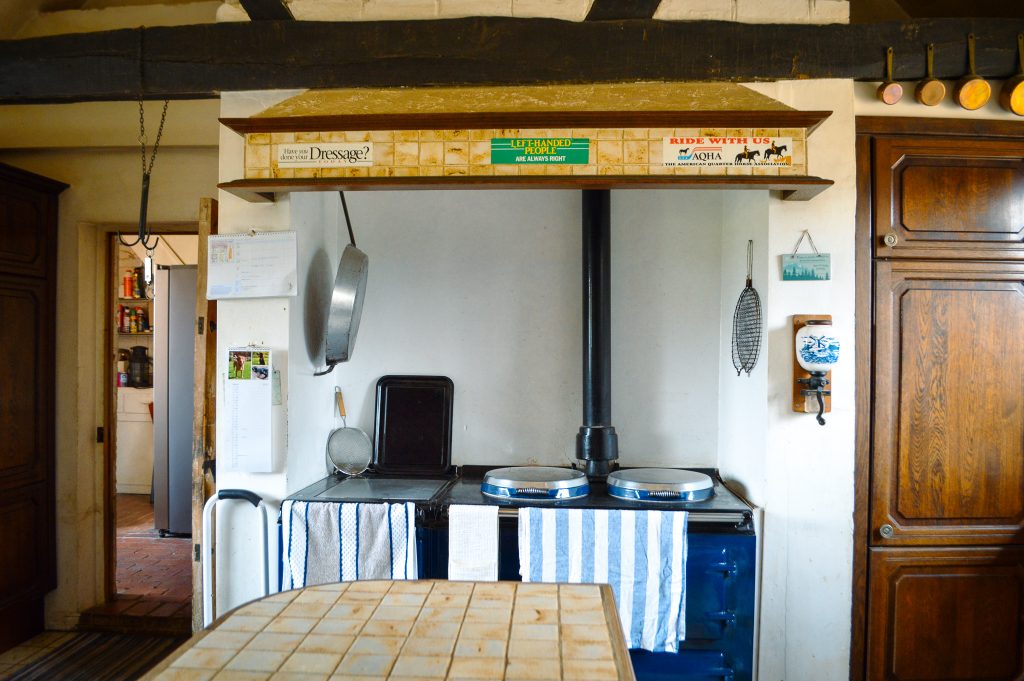 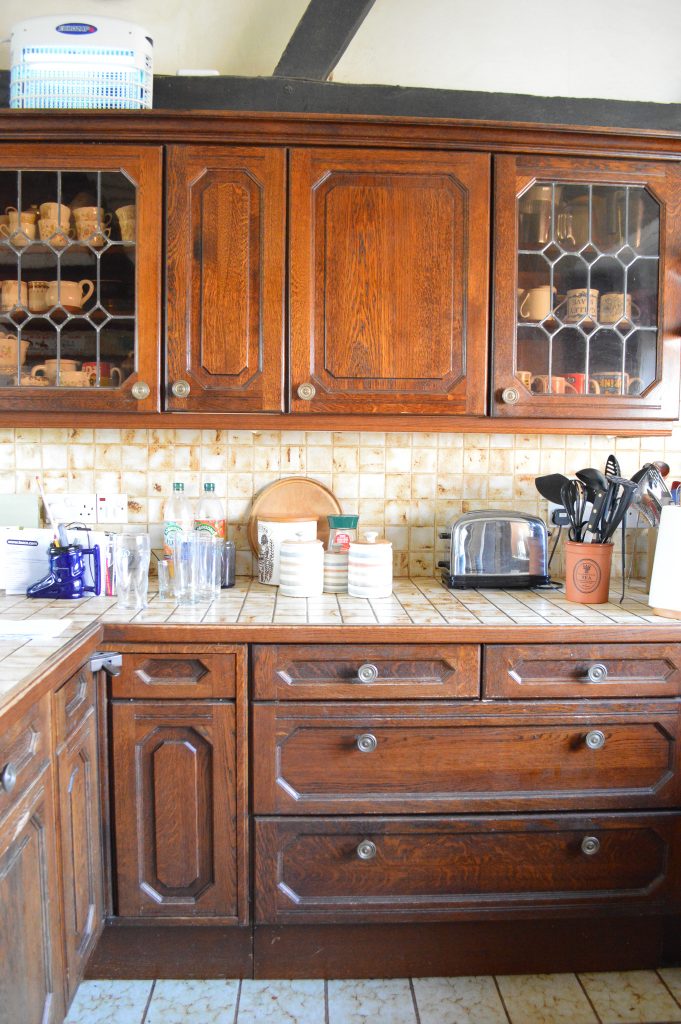 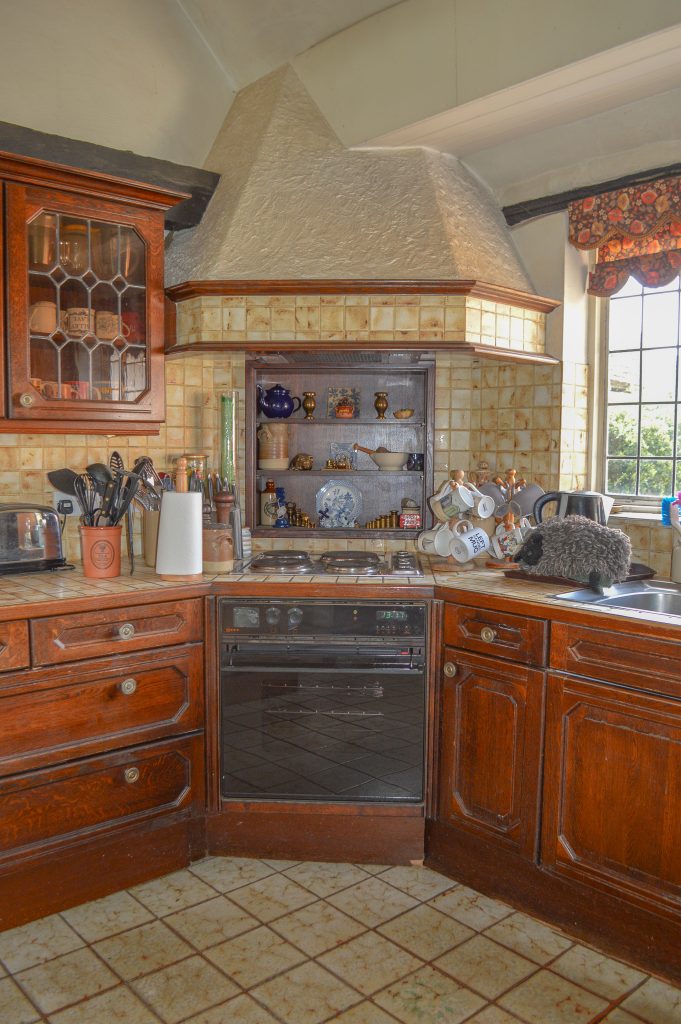 It overlooks a gorgeous patio in the back, and while I was snapping photos, a “semi-wild” pheasant (named Sir Cuthbert!) came by for his daily lunch. 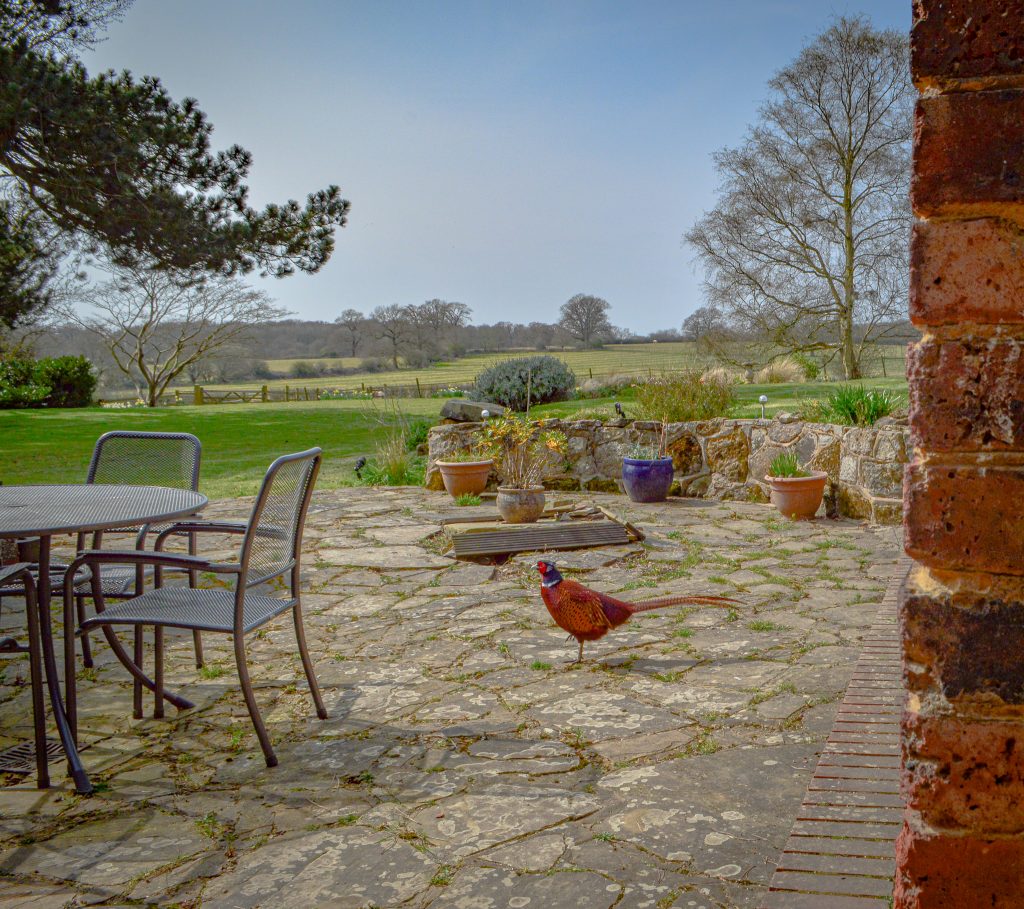 The current owner told me she and her husband were undergoing a renovation in the kitchen area and had to dig out the space that is now the patio to make it lower. Apparently while they were digging, they unearthed an old well that had been covered up by a big rock slab and forgotten about!

The setting of this lovely farmhouse is hard to convey with words, but I hope some of these photos can show how truly beautiful it is. 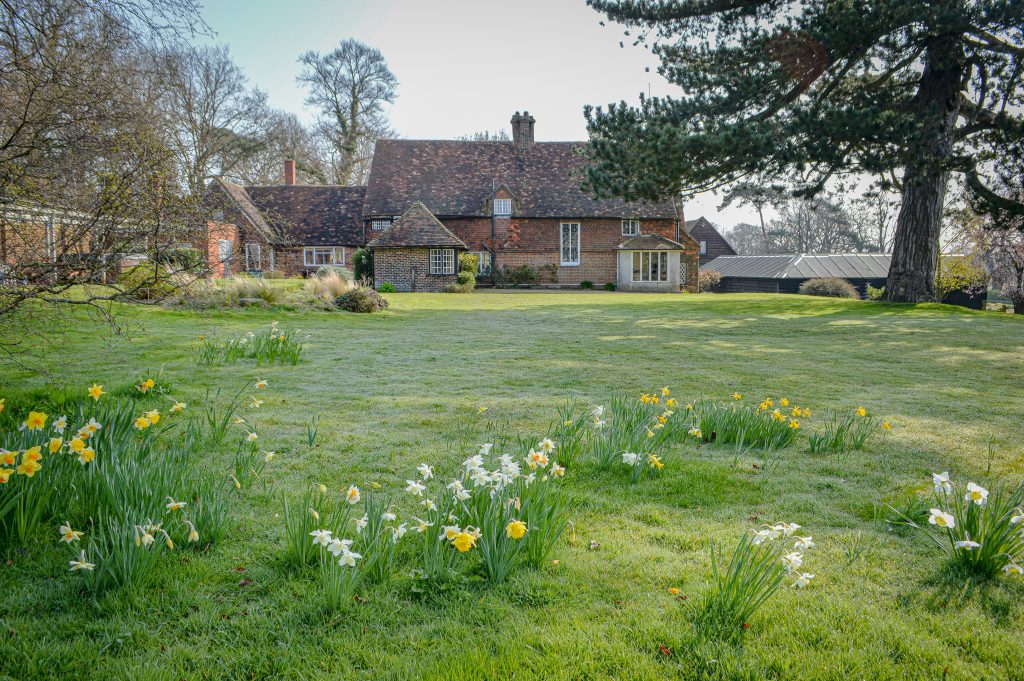 Through the kitchen is an office (just note these amazing beams in the ceiling of the office!): 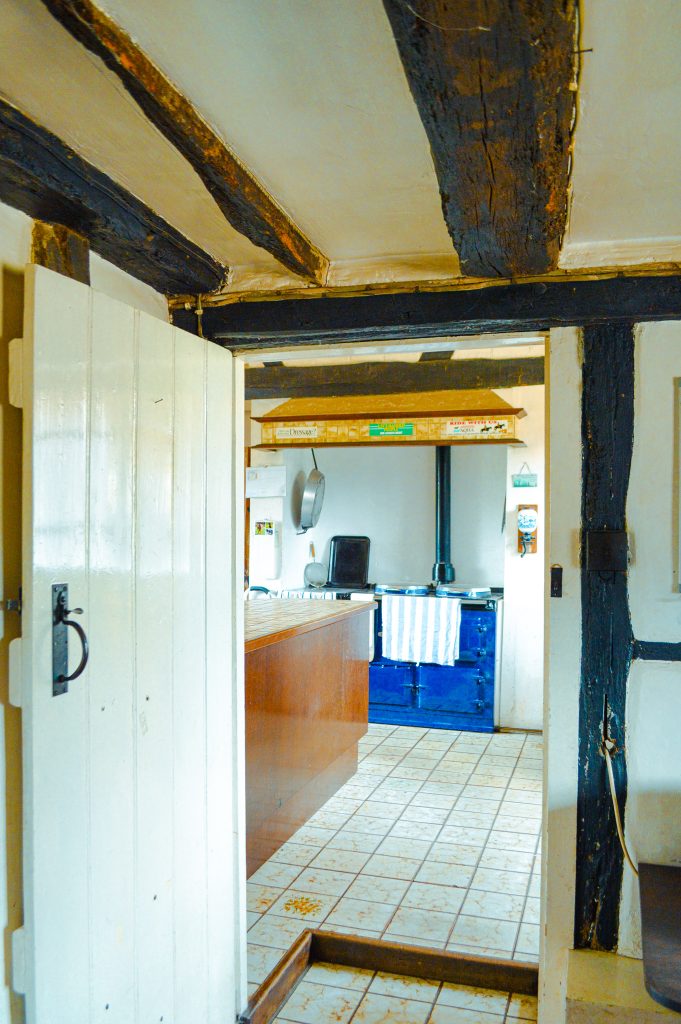 And then the piece de resistance: this dining room with this seventeenth century fireplace (added to take the place of the fifteenth century fire area, of course). You can literally walk in this thing. The mantle area is ~5 feet tall, I would guess. 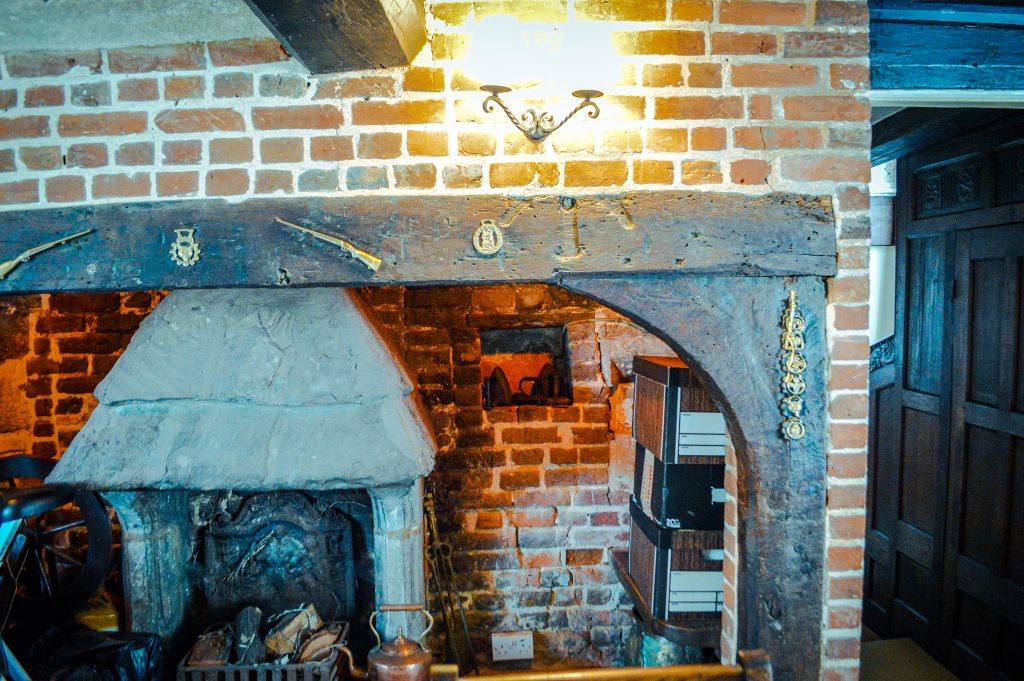 The gorgeous slabs of slate covering the part in the middle is from England too.

In the photo below, you can see the interesting mark in the wood. It’s where a rod used to go through the mantle and hold something like a spit on the inside of the fireplace. The half-circle you can see around the top is from years of someone rotating the spit. Is. That. Not. Awesome?! 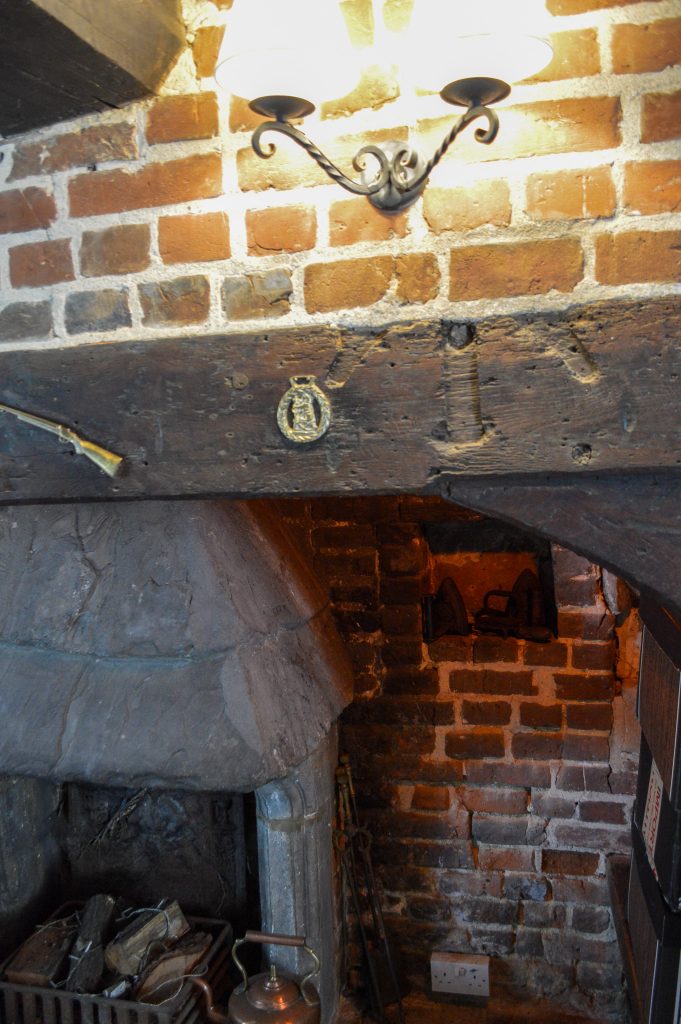 There are also burn marks like the one below which are from tallow candles (which didn’t burn as cleanly as beeswax or later “inventions”). 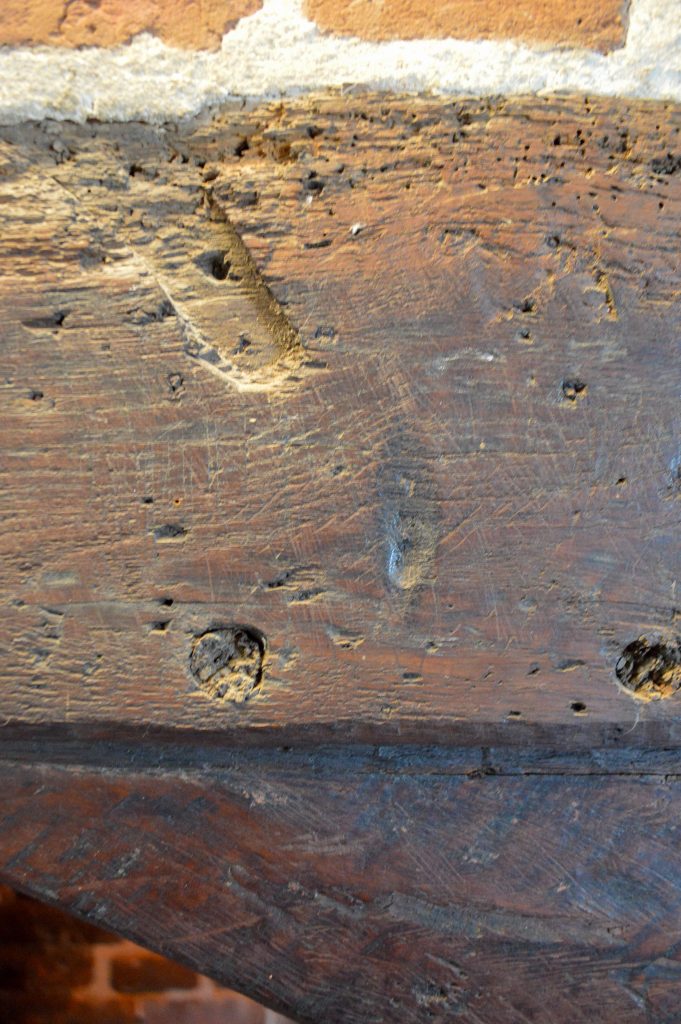 The dining room is regularly used by the family living here and again, you can tangibly feel the happy memories. It’s an enormous space and yet it feels absolutely warm and welcoming. 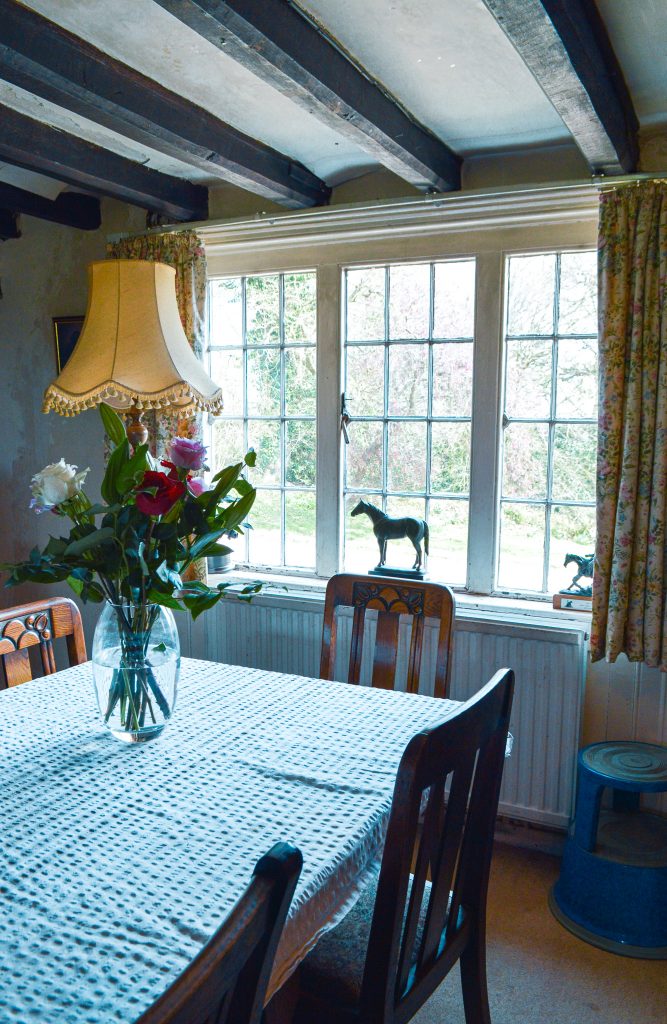 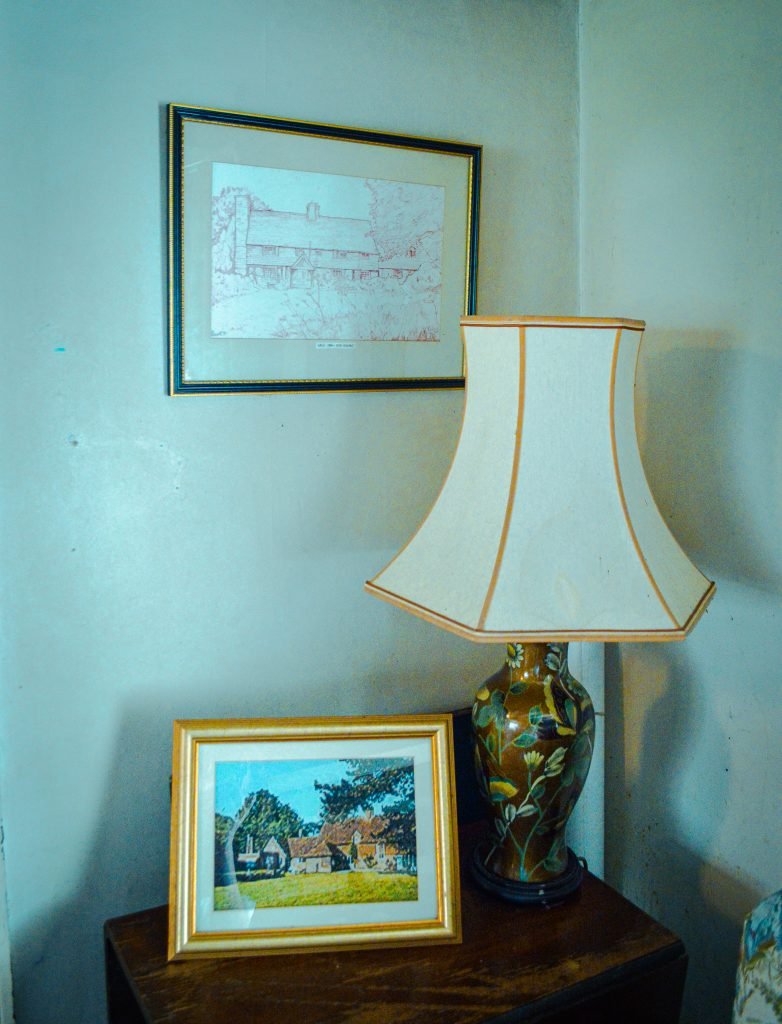 This spacious room on the far side of the house is the sitting room. It also has an incredible fireplace (although this one was added much more recently– more like around when America was founded as opposed to the middle ages, you know, soooo recent). This room is the only one the owners had to “remodel” if you will, when the ceiling collapsed. The owner’s husband redid one of the interior walls that needed fixing himself using legitimate lathe and plaster (like our house’s walls!). 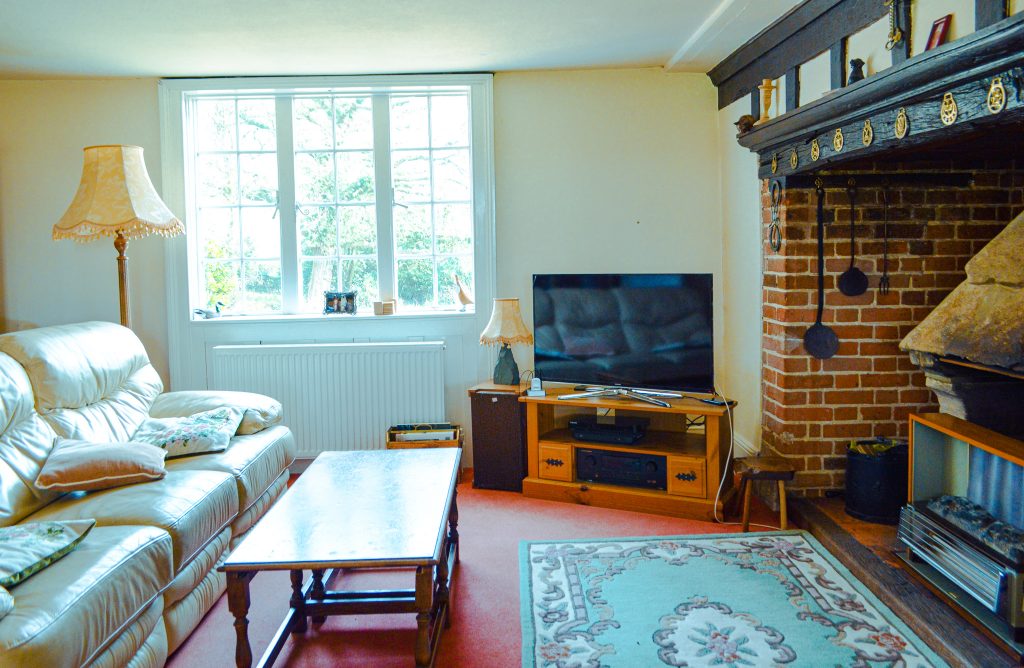 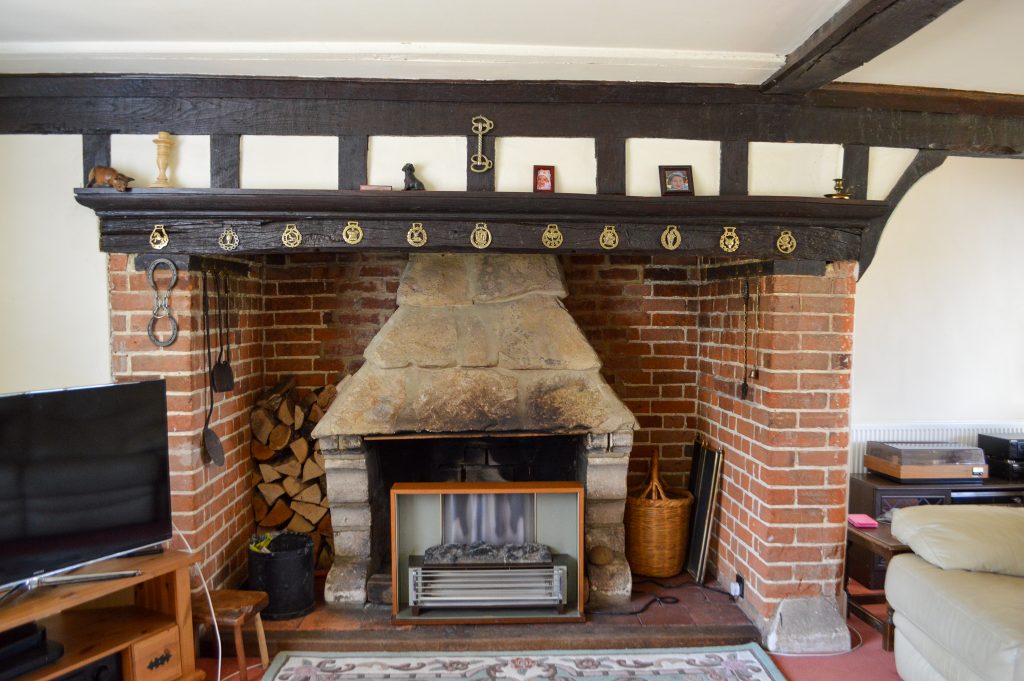 A little alcove in the back of the room has original windows that are centuries old. They let in so much light and provide a serene view of horses grazing. 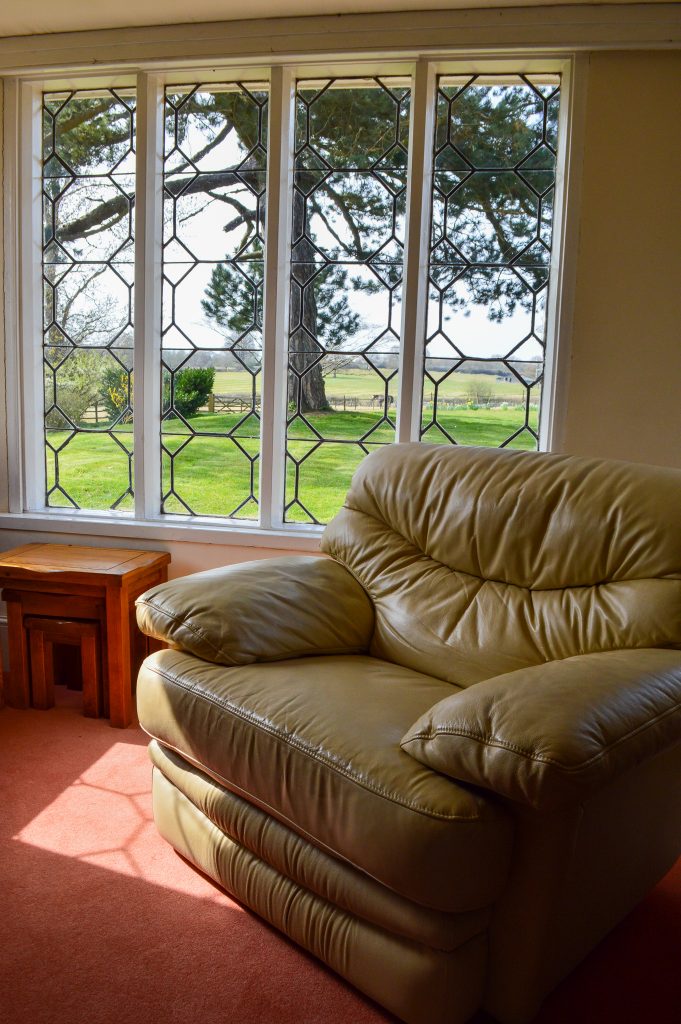 The farmhouse’s main front door leads to this hall in between the dining room and sitting room. The door is a bit drafty (to the point where the thermostat is always trying to keep up– another commonality our house shares with this one, haha). You can see the sunlight peeking through in the photo below. 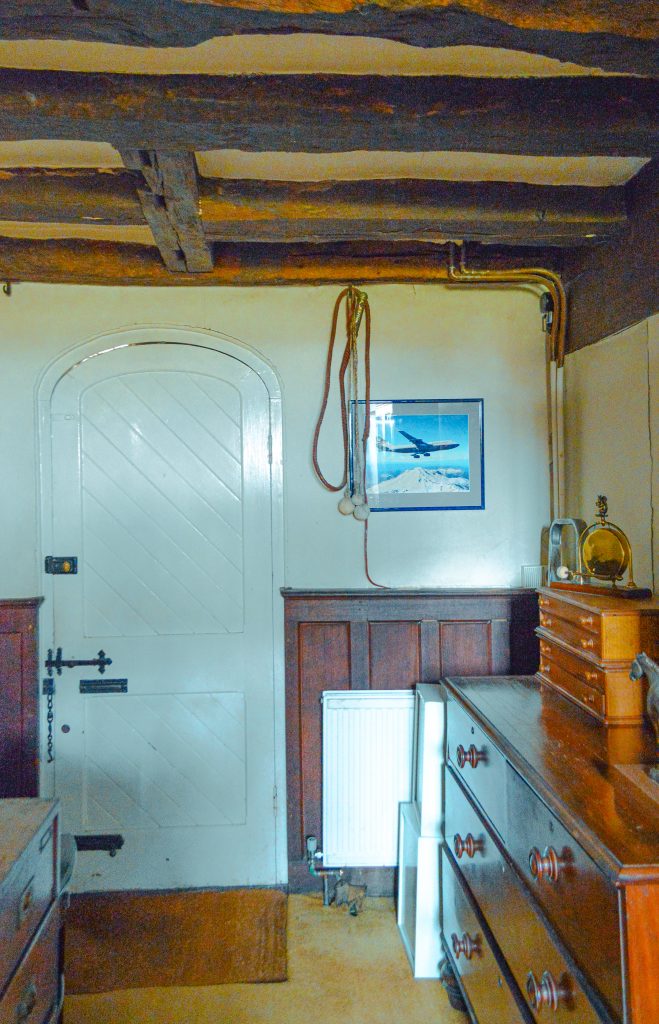 I love the gorgeous oak panels halfway up the wall in this room. Also note this stunning trimwork above one of the doorways: 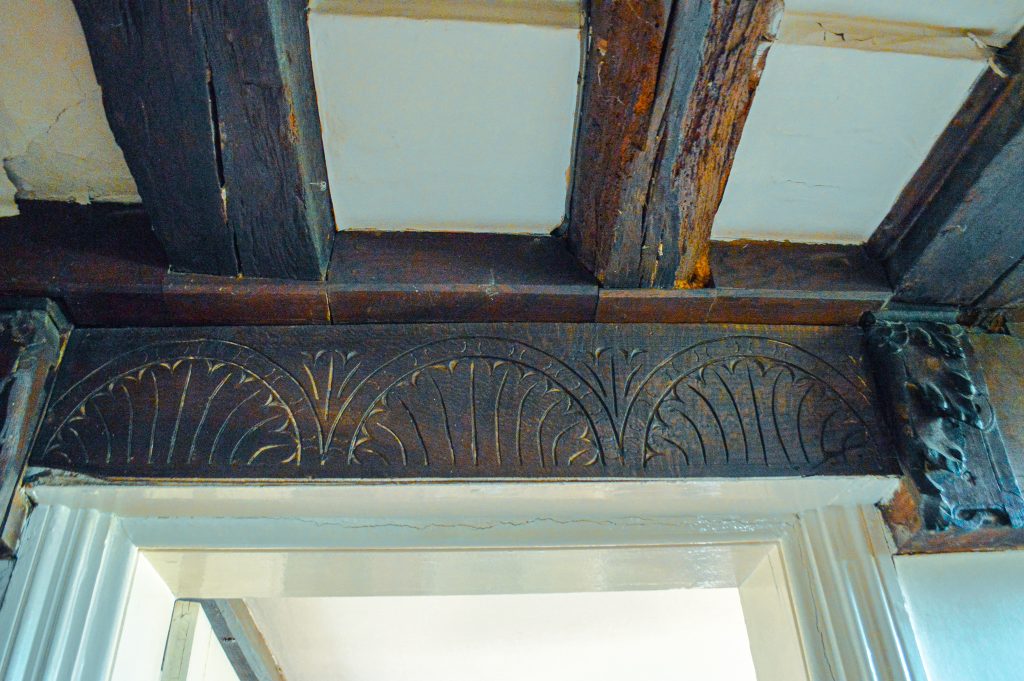 One of the (many) staircases in this house is at the back of the entrance hallway. 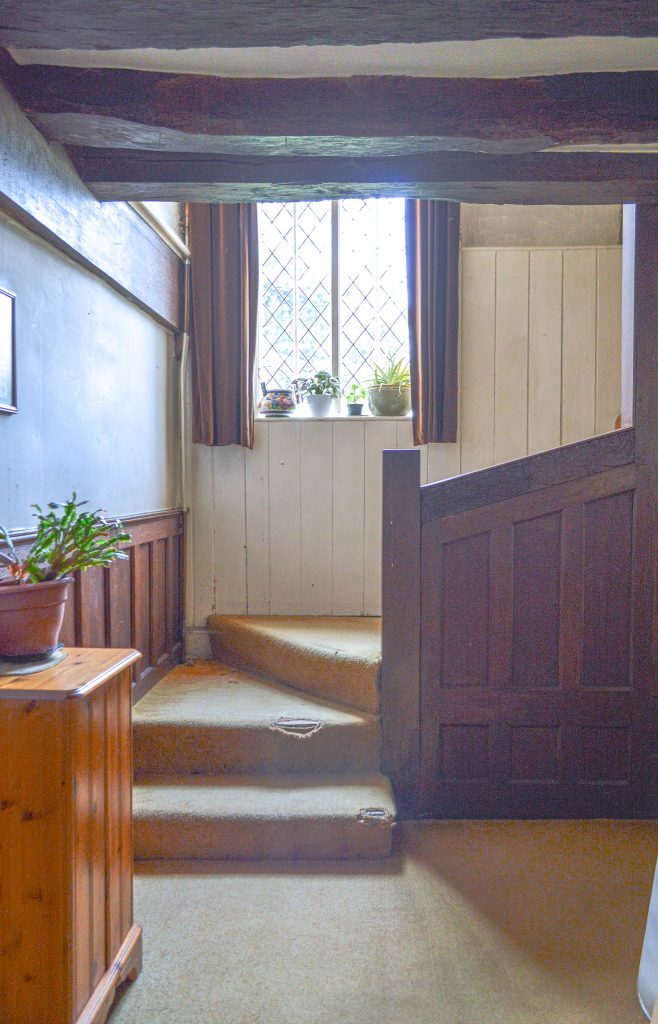 These vintage windows seem to go on forever! 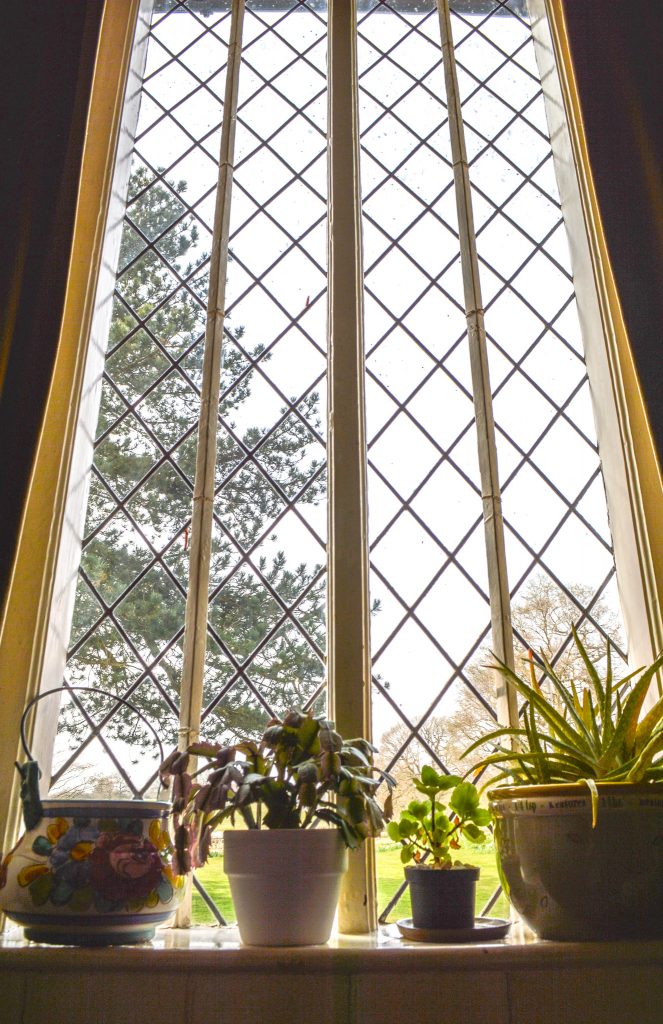 There are many bedrooms upstairs, perfect for the family (and past families) that have gotten to call this farmhouse “home.” One of my favorite characteristics I saw was this very, very old door that doesn’t have a traditional door handle. There’s a little hole in the door with a string going through. Traditionally it would probably have been leather. Anyway, the string goes through the door and on one side is something weighing it down, in this case a historic nail. 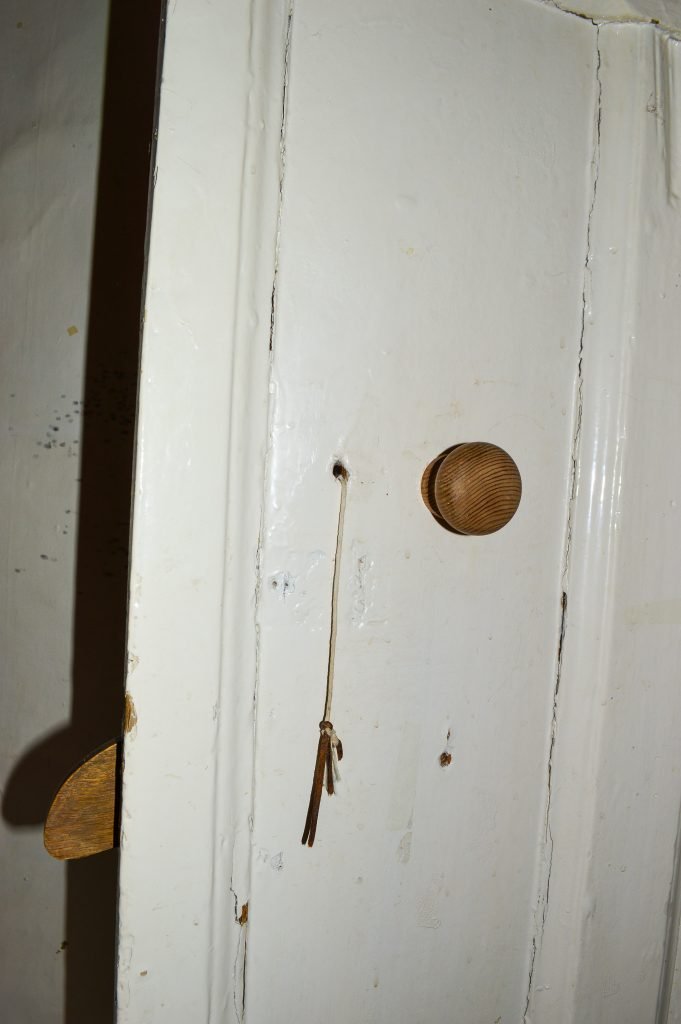 On the other side of the door the string connects to a piece of wood that gets raised and lowered within a handle. It allows the door to open and close shut! I’ve never seen anything like this and think it is so cool. 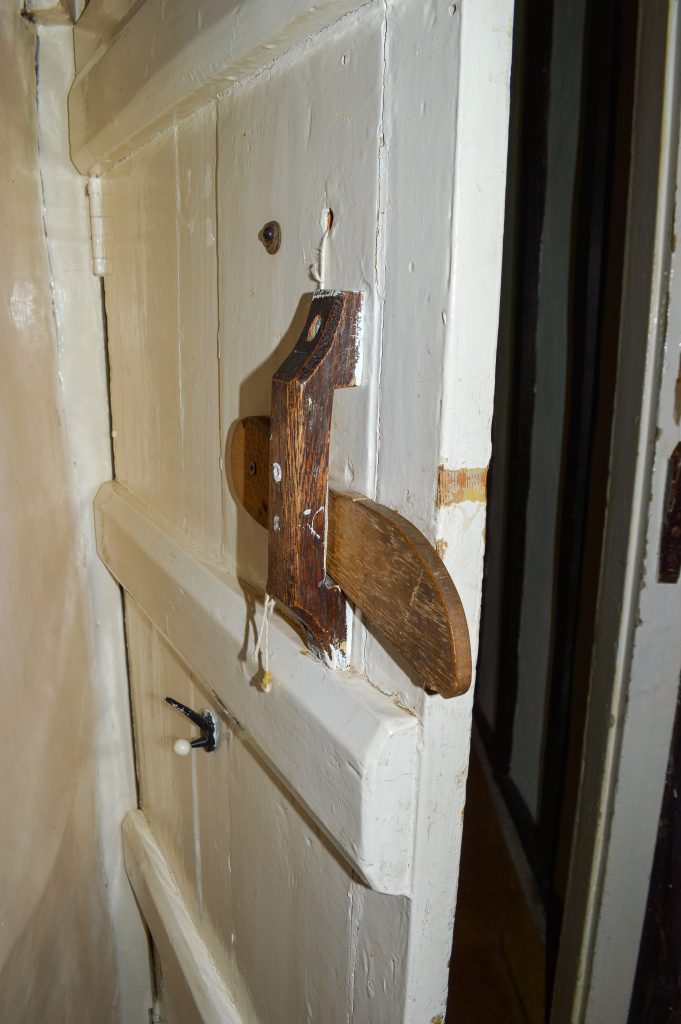 One of the bathrooms upstairs captured my eye as being utterly charming. First of all, I love the juxtaposition of modern with old. Second, look at how incredibly not straight the timber framing is compared to the straight lines like the curtain valance or tiles. And third– photos don’t do it justice but this is an amazing tub! The owner said it’s likely from the Victorian era. It’s extra, extra long. When they were remodeling their bathroom years ago, the contractor they were using kept mentioning how they should replace it with a more modern tub. He mentioned replacing it so much that they got worried he was “accidentally” going to hurt the tub. They ended up building a cheap temporary wood frame around it to protect it during the renovation. 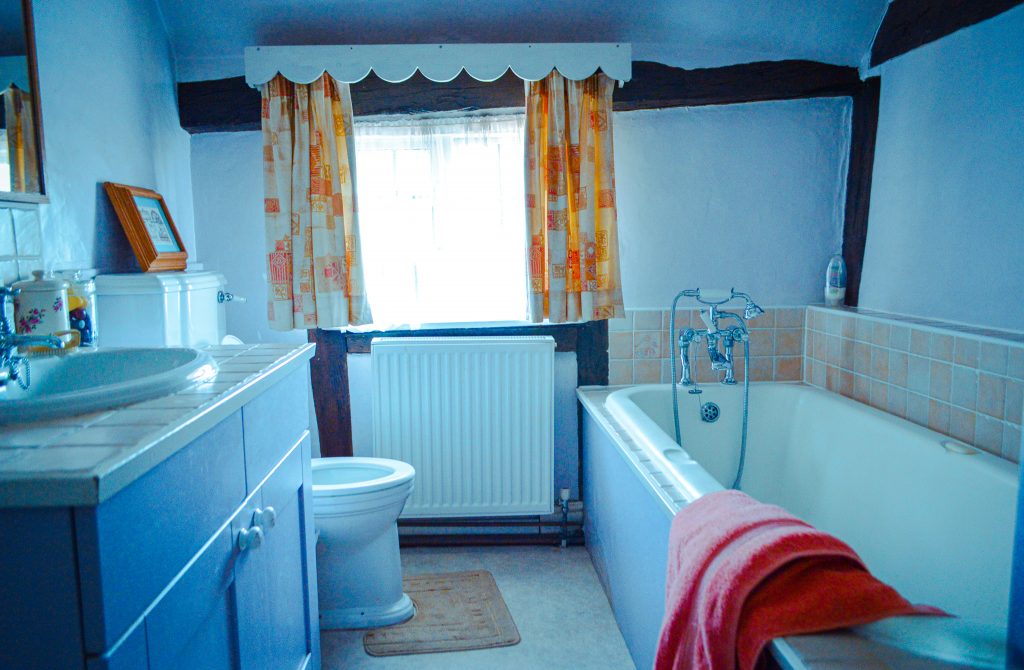 One of the windows upstairs allows for a perfect view of these handmade roof tiles. 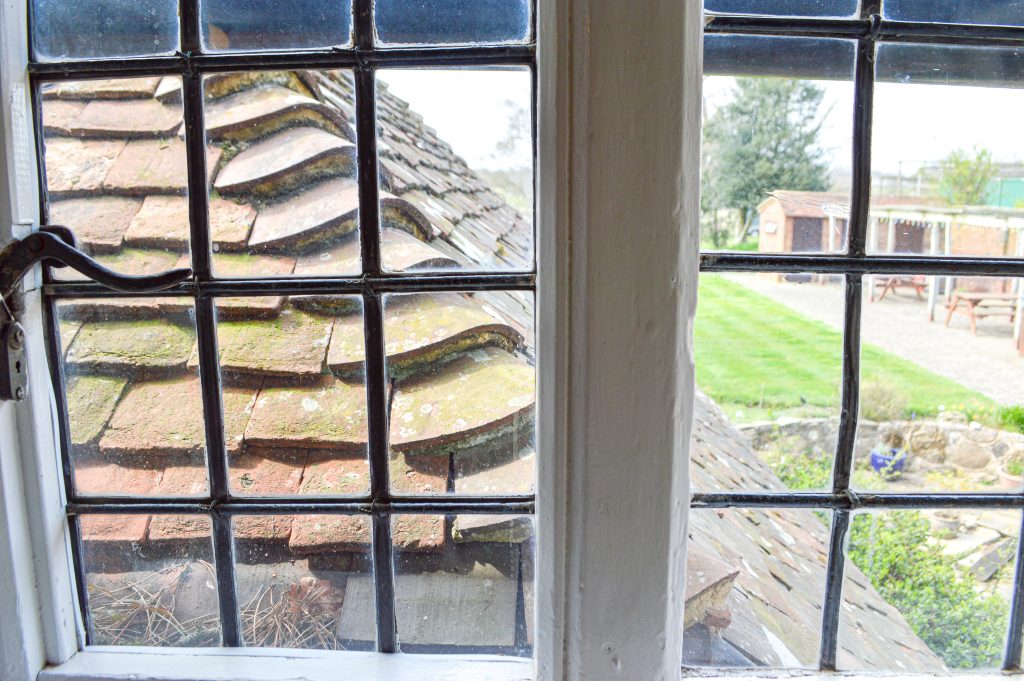 Oak Tree in the Countryside

This oak tree outside is jaw-droppingly spectacular. The owner told me she’s been told it’s older than the house. It used to be common practice to saw off the limbs of an oak tree and use them for lumber because the new growth would grow back straight (and make for even better lumber). 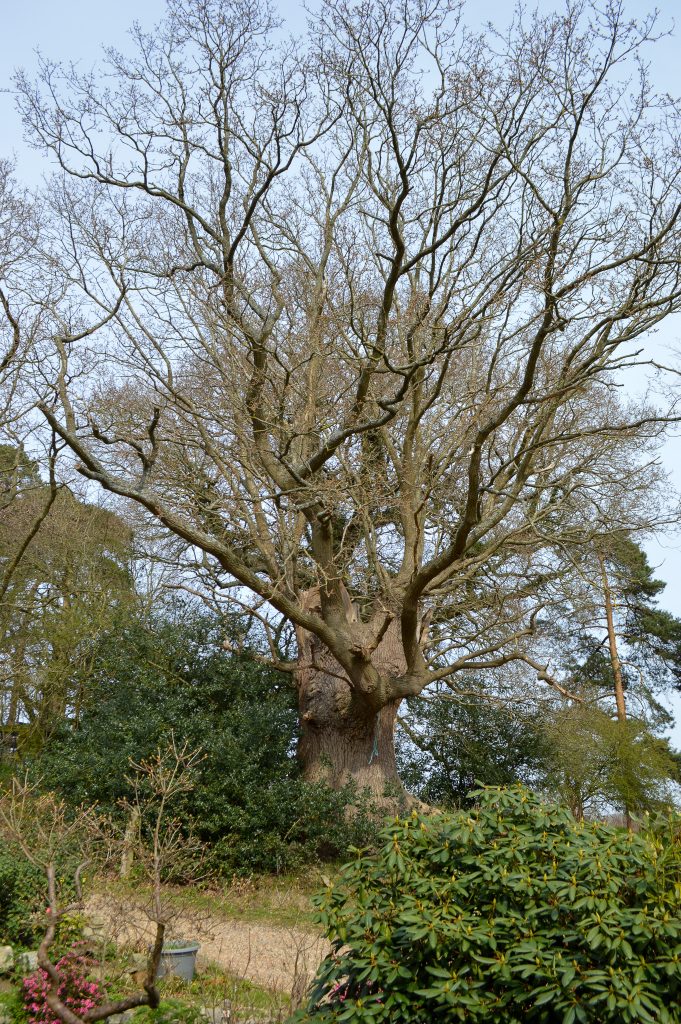 This farmhouse is unlike any I’ve gotten the pleasure of touring before. I love English farmhouses so very much! They’re so different than our more typical Virginian ones and I love the differences, mostly having to do with the age of the house. My favorite part of this farmhouse is the bright, happy feeling it gives when you’re inside. It’s not at all dark and dreary, but instead feels cheerful and welcoming in all the rooms. (Doesn’t hurt that all the rooms are absolutely beautiful, as is the setting!) I’m grateful I had the opportunity to visit this farmhouse and look forward to sharing more English farmhouses with you in the coming weeks.