I am so unbelievably excited to show– or, as everyone in the blogging world says, reveal— our brand new deer-proof raised bed garden.

We’ve been dreaming of designing a garden in our yard ever since we were under contract on our house back in 2013. Even before we dreamed of getting pregnant, I had visions of raising our future children at this house and spending hours outside every day gardening. I grew up spending countless hours watching my grandmother garden at my grandparents’ farmhouse in the Shenandoah Valley. It just felt like something I should try to emulate.

Originally, we had planned on putting in a garden around the garden shed on the outskirts of the fence… but as we discussed that plan with my aunt, she mentioned how my grandmother moved her garden area closer to the main house because it was too out of the way to get to every day, and we brainstormed on where to put a garden that would be convenient to walk through every day.

We had this big empty space between the house and the chicken coop and decided to give it a try here! We collect the chicken eggs every morning so we’re in that area of the yard anyway. 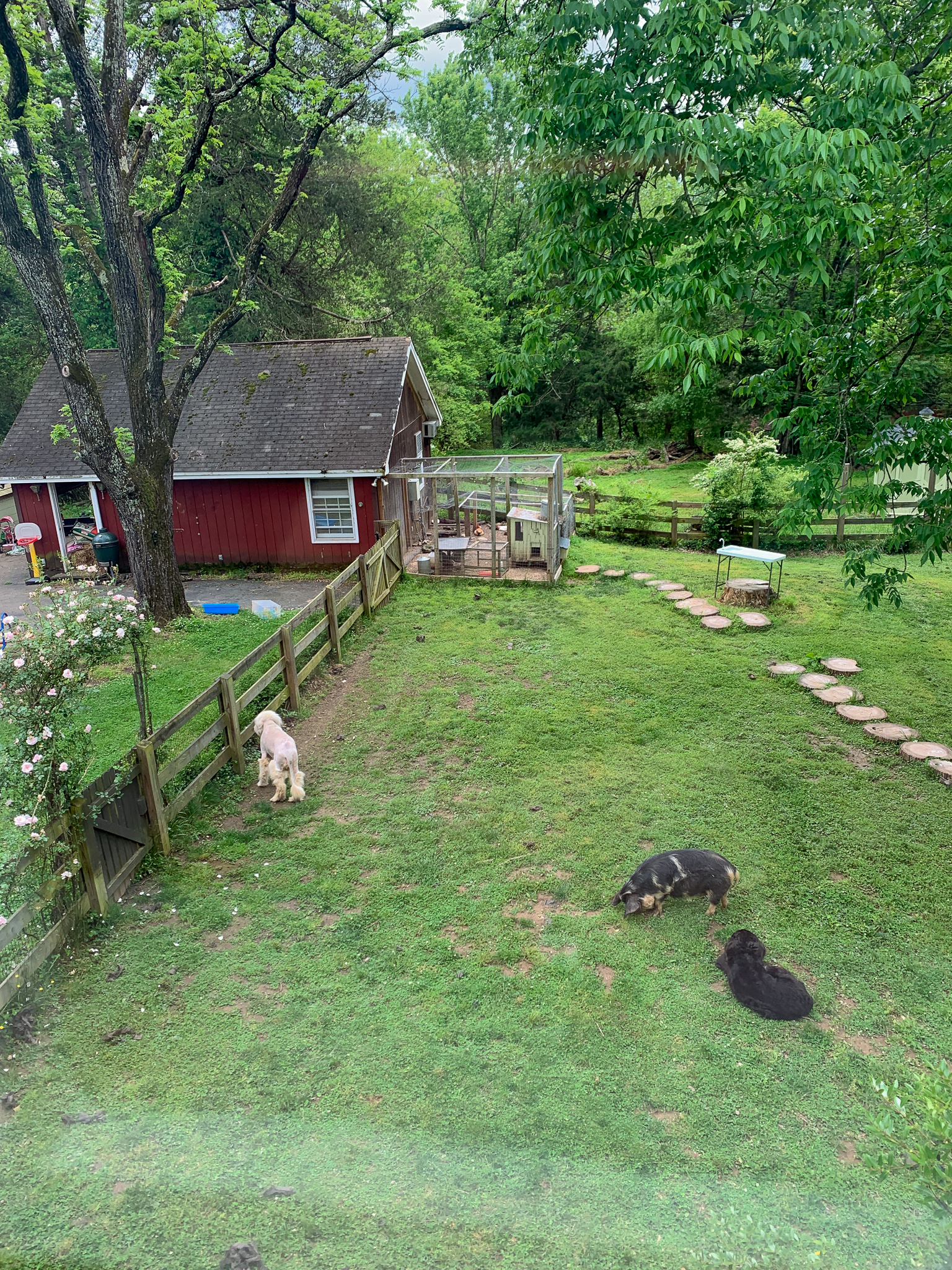 (Above you can see our recently departed sweet white dog, Riesling, one of our kune kune pigs Tinkerbell, and our perpetual puppy wolfhound mix Kaiser enjoying what would become the garden area.)

We worked with two local contractors to design and build the beds and 8′ tall deerproof fence. We had to use cattle wire on the bottom half of the fence so that our beloved pigs wouldn’t work their way through. Chicken wire was fine for the top half. They suggested building a little potting table as well, which ended up being a great idea (and something I wouldn’t have thought of myself). It’s ended up being really handy.

The beds themselves were designed to have two big ‘U’ shaped beds that were 3′ deep and a few 1′ deep rectangular beds around them, plus a 1′ deep square sandbox. A slight hiccup was that our contractors didn’t take the gradual slope of the hill into account so the beds ended up being much deeper than that, which meant the planned 3′ ones are too tall for the kids to be able to reach. The good news is there’s still plenty of planting real estate for the kids to reach the 1′ beds.

Below is a photo from last fall as we were mid-project. 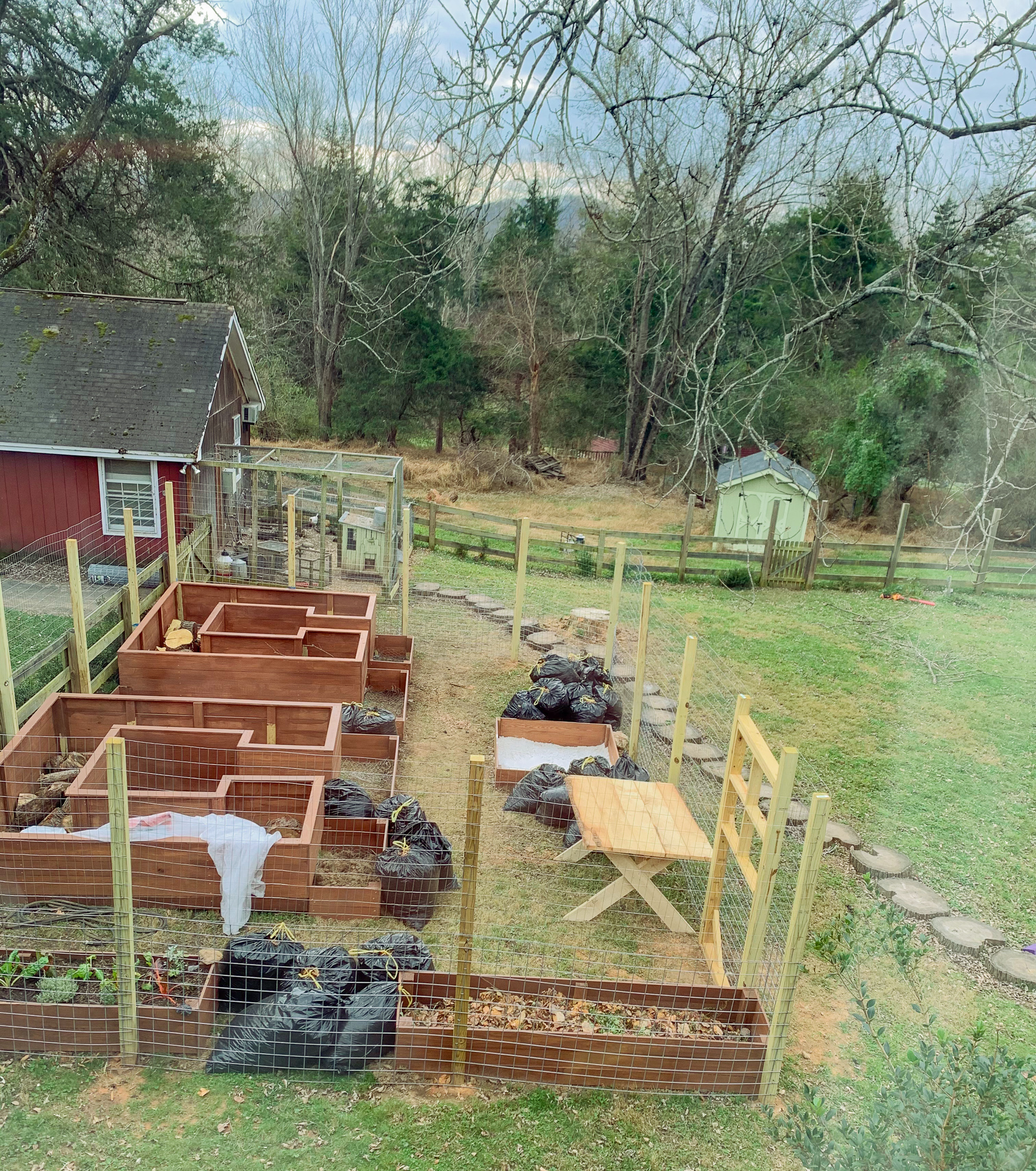 It was a surprising amount of effort to fill the garden beds. (I’ll do a separate blog post on how exactly we filled the beds later.) 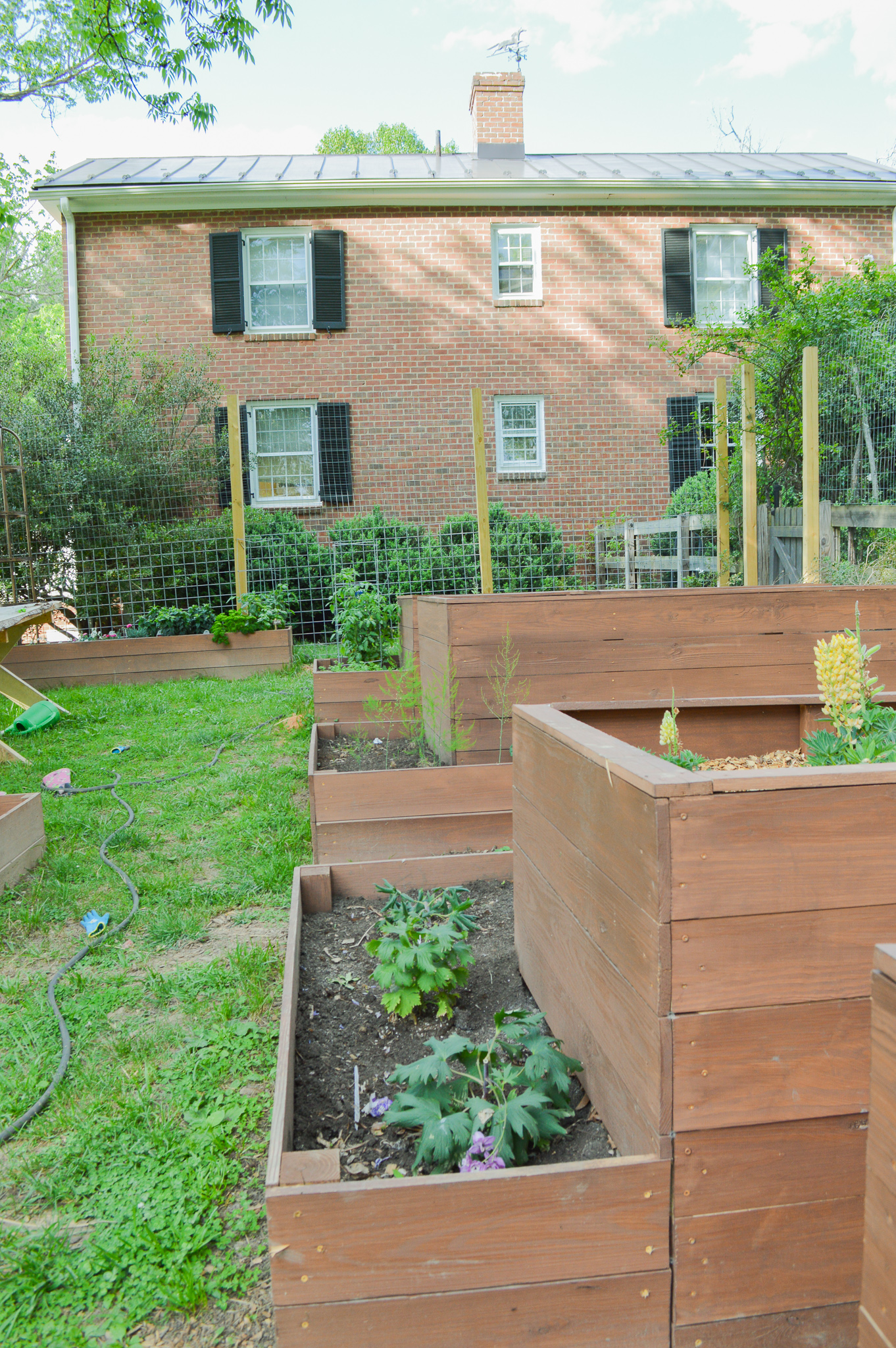 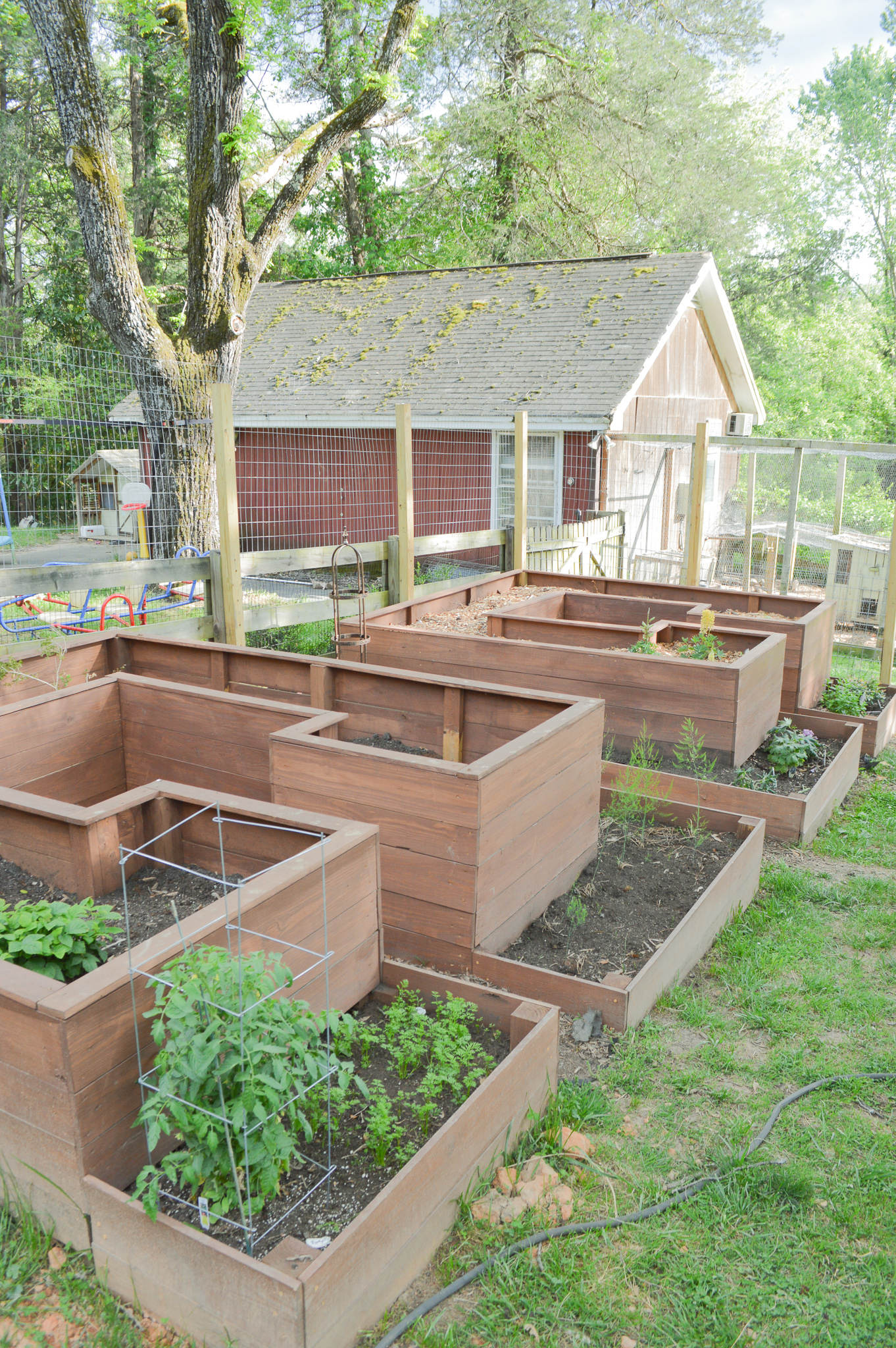 Sandbox for the Kids

Here’s a closer picture of the fabulous sandbox we put in: 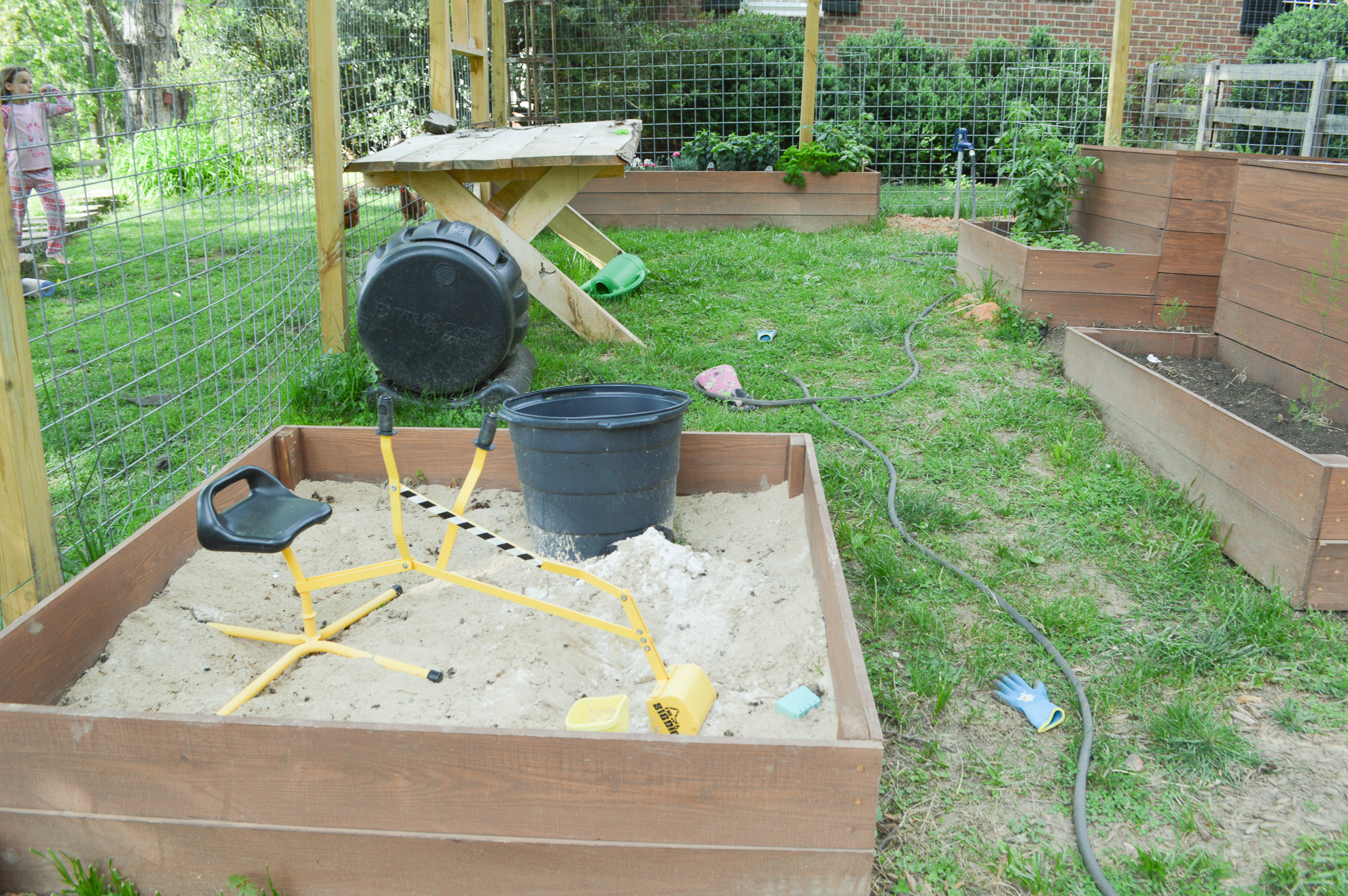 I’ll do a separate post on sandbox tips/ the details there soon. 🙂

And here’s a great view from the backyard showing the whole thing. It’s not a rectangle, because on one corner we cut it off at an angle to make way for a cleaner path to the chicken coop (remember, it’s all about convenience!). 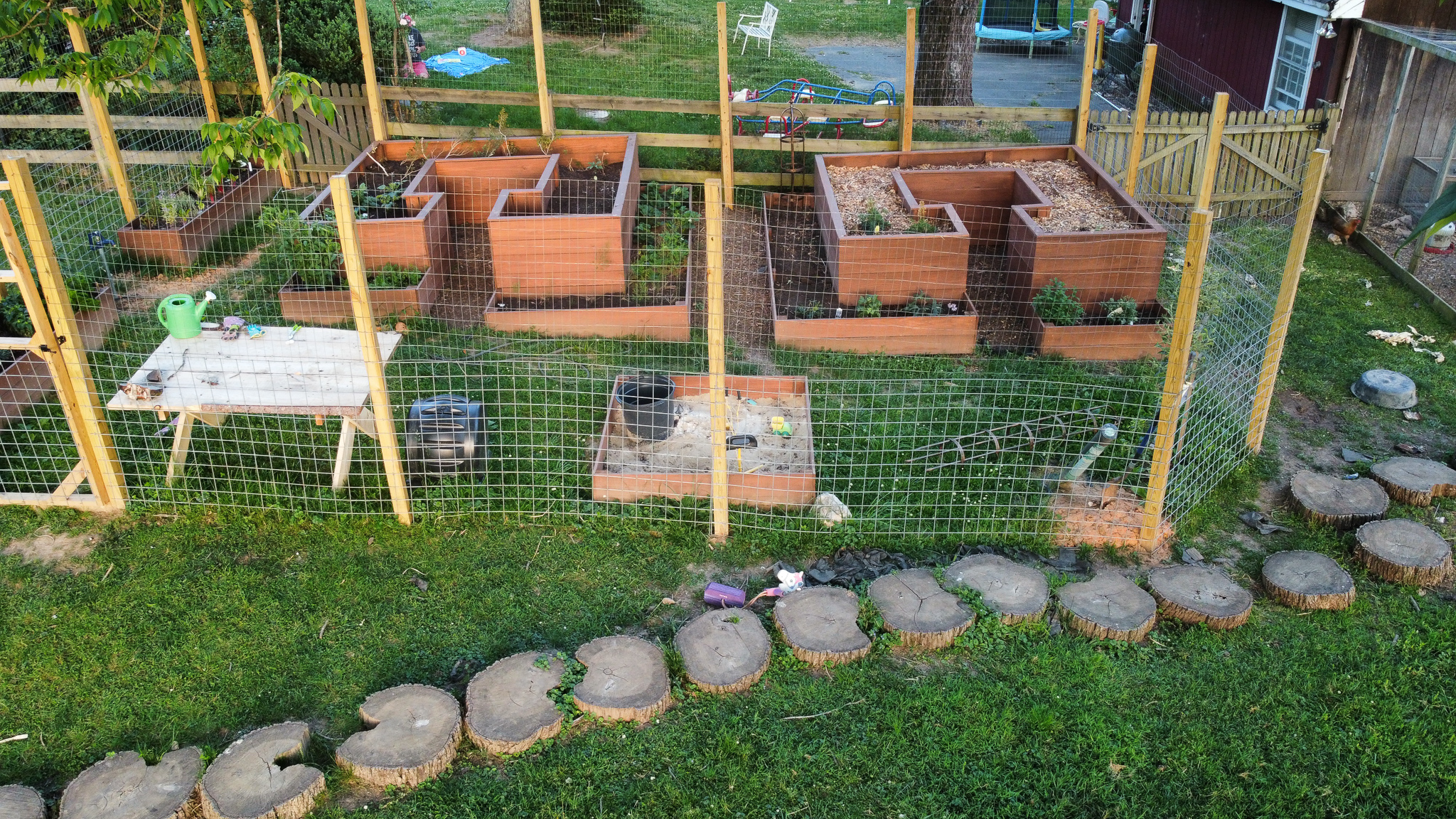 (Yes, we have tree rings going from the back porch behind our house all the way to the chicken coop. We had to have a tree cut down. It became our pathway to collect the eggs each morning without stepping in any kind of dog/ pig excrement… highly recommend, hah!)

Proximity to the Pigs

One of my favorite features is how open it is toward the backyard. Visually, it’s fun to see the pigs and chickens grazing just on the other side of the fence. 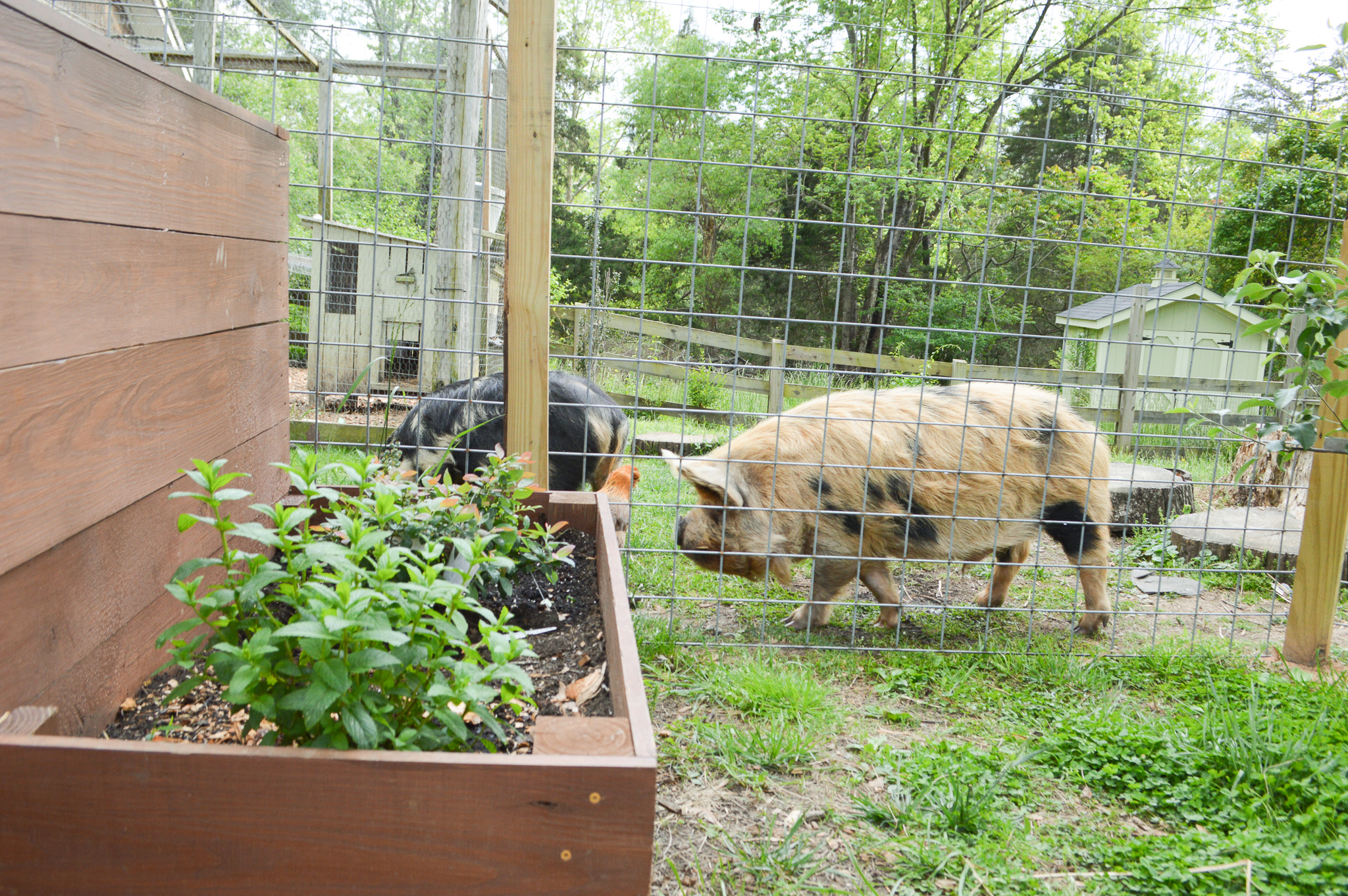 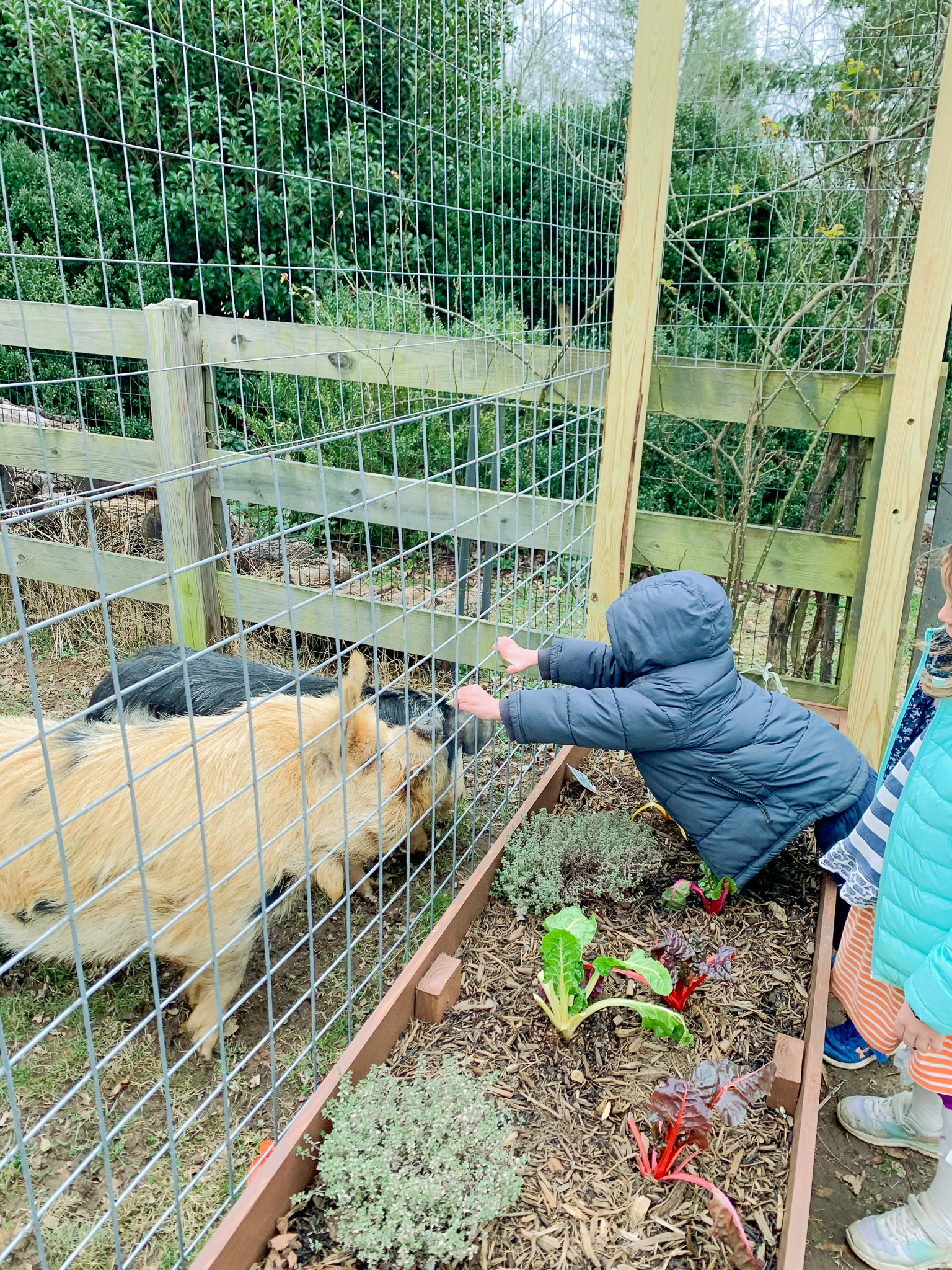 Eve labeled most of the plants we’re growing by writing the names on oyster shells we found in the Chesapeake Bay. She just used a sharpie to write directly on them and it works great for us. 🙂 For example–below you can see CARRO and on the line below, a T. 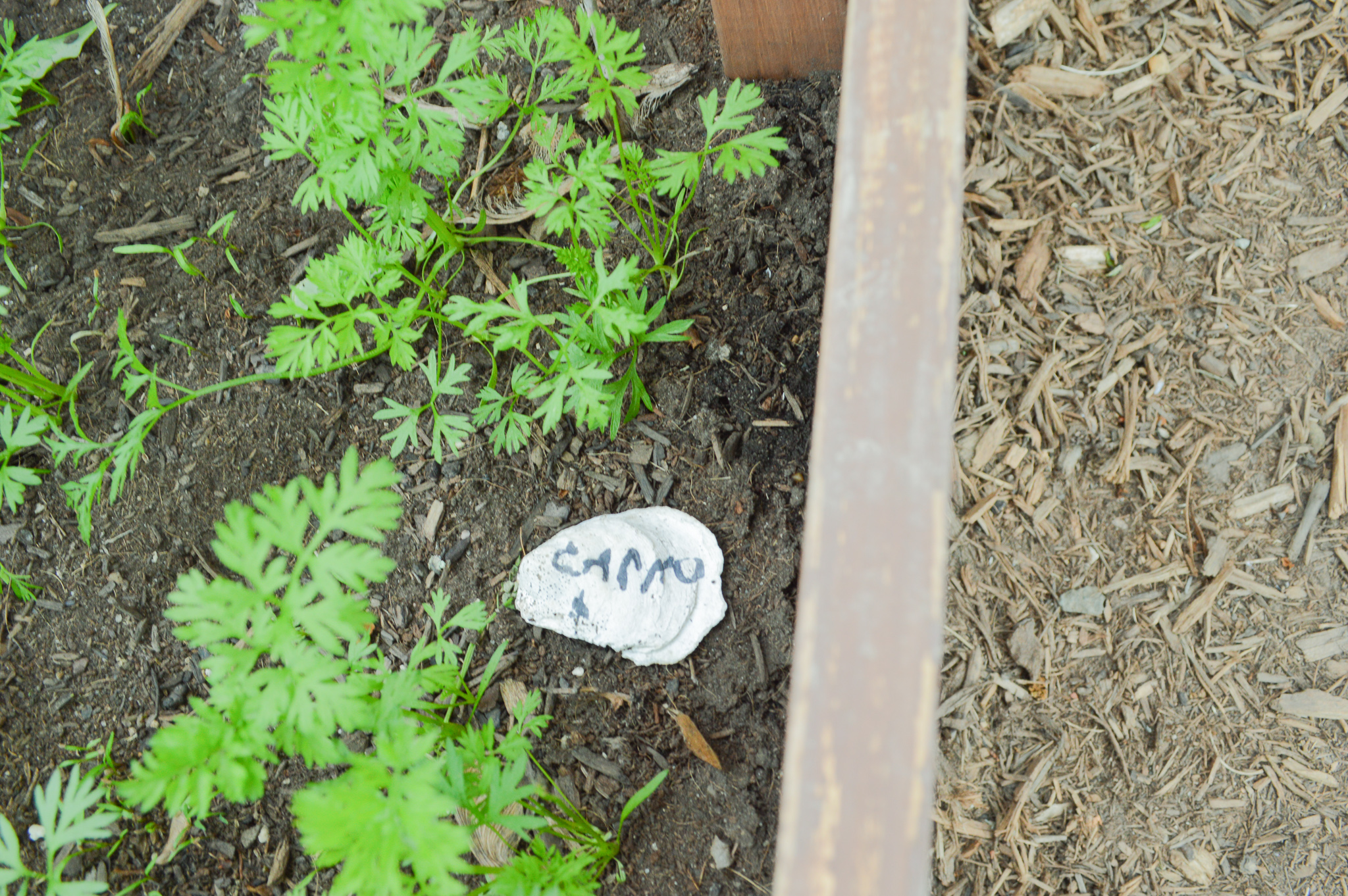 We put mulch in certain pathways of the garden to cut down on weeding, such as inside the U shape 3′ deep beds. Eventually we’ll figure out something to do for the whole walkway area but for now most of it is grass.

We installed a water spigot on the side which has made watering everything a bajillion times easier. At first, we would leave the garden, walk out to the garden shed, fill up the watering can and bring it back about five times a day. Now it’s just as simple as hosing everything down (which the kids seem to enjoy doing!). 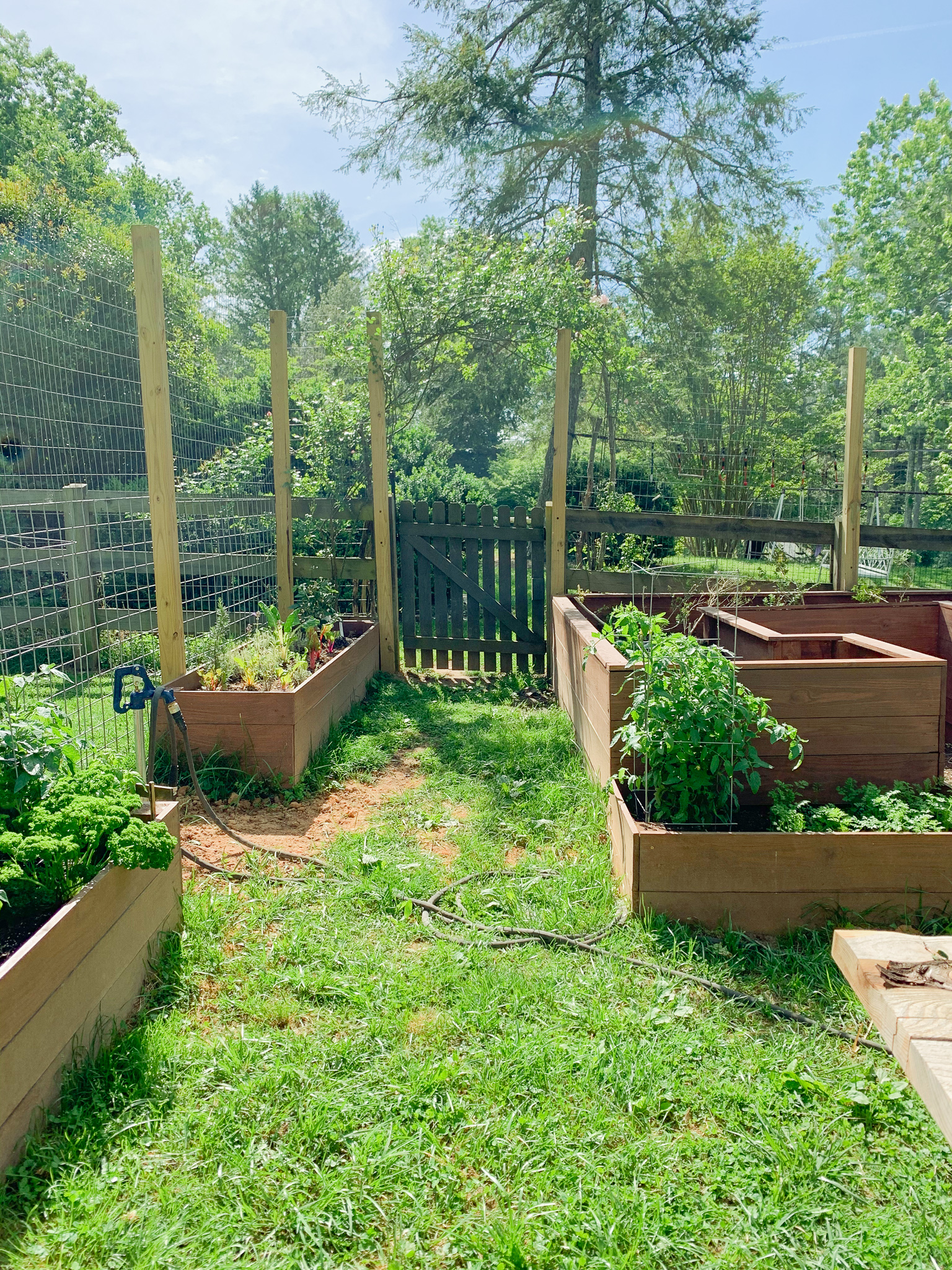 I’ll do another blog post talking about how we filled the garden beds, what we planted, and how it’s all going. This garden has been our family’s lifeline since the weather started to warm up this past March, especially April once things started growing in it… we all spend time in it every day. It’s been relatively simple as far as the time put into it.

Delegating Help When We Need It

We hired someone to construct the beds then we hired neighborhood kids to fill them, but we all love being outside and watching everything slowly grow. Next time I share about the garden, I’ll share how it’s going so far. We’re novices to this whole gardening experience. I figure everyone has to start somewhere, right?