Sorry for the lack of blog posts of late; I started work again and Evie’s been sick for almost 6 weeks now.  So needless to say, we’ve been pretty sleep deprived and updating the blog hasn’t been the highest priority (sorry!).

I thought it might be interesting to give y’all a glimpse of what life is like in our farmhouse right now by showing you pictures of Evie’s nursery– six months in.  All over the internet and in magazines, books, etc., you can come across pictures of beautiful tidy, picture perfect nurseries.  (I even showed pictures of Evie’s back in the day.)  But you know what you don’t see??  What the nursery looks like when the mom is working full time and the six month old baby’s sick.  So, dear readers, here is a special treat: real life! 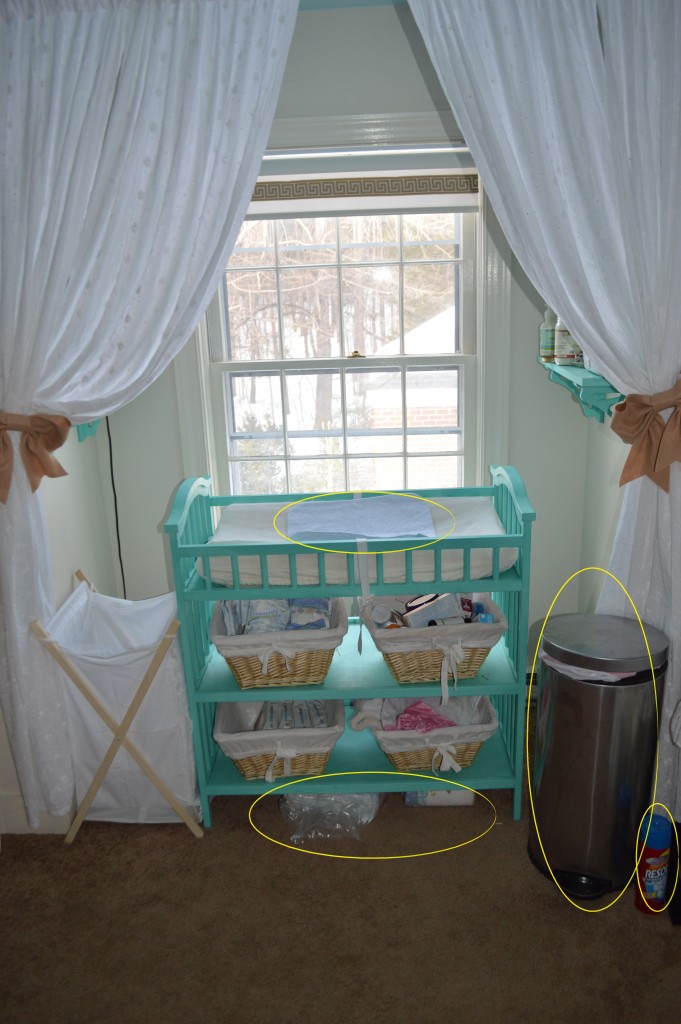 Note the big ol’ trash can for diapers (those are rarely shown in photographs of nurseries), the spray bottle of Resolve for getting out carpet stains, the bags of disposable diapers stashed under the changing table (I tried cloth diapers and failed miserably!), and the mat on the changing table pad so that I don’t have to change the whole cover if it gets dirty. 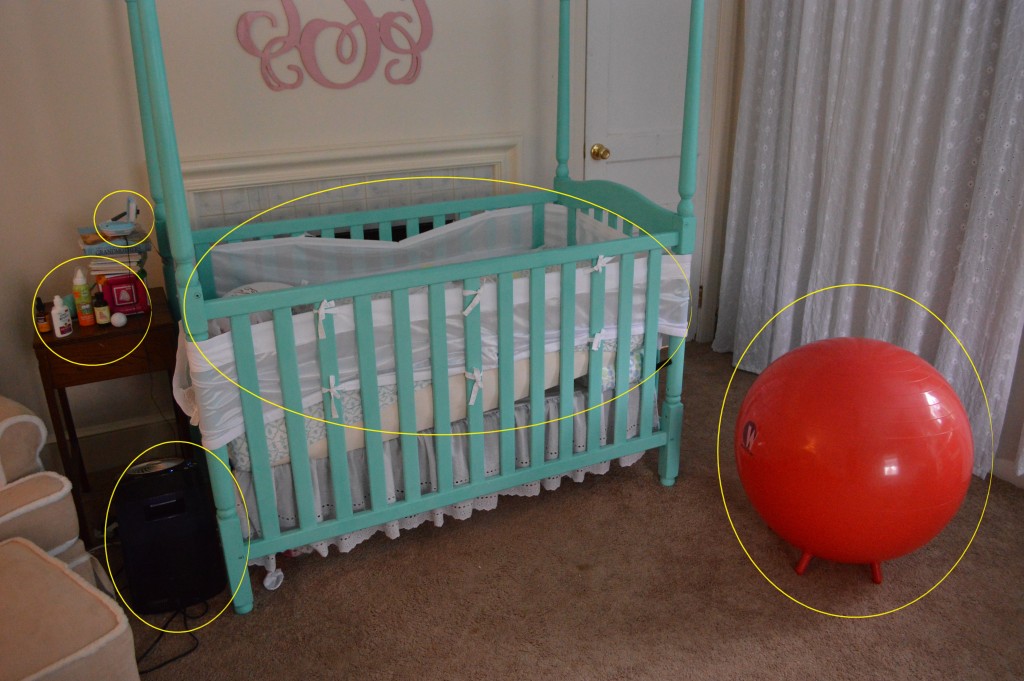 When Evie was younger she had some crazy reflux and the only thing that would help her feel better was bouncing on the big red ball.  Do we need it anymore?  No.  Have I had time to put it away?  Definitely not.

Also, note the white mesh crib liner in the crib.  I didn’t have a liner before because they’re not recommended for safety reasons, but after Evie learned how to roll around the crib, she kept getting her little legs stuck in between the slats.  It was horrible because she wouldn’t know how to unstick herself.  A few weeks ago, she was teaching herself how to crawl and used the slats as pushing off points.  I decided then it was enough and I got the mesh liners, hideous as they are.

There is also a new piece of furniture in the nursery– the little end table between the rocker and the crib.  It is used to hold all the meds for a sick baby as well as the video baby monitor.  (I know, it’s not attractive in the least, but it serves its purpose and that’s all I care about right now!)

And last above, we have a new humidifier.  It’s not sexy, but Evie needs it, so it has a home next to her crib until summer when it gets naturally humid again!

When your baby has post-nasal drip and it’s waking her up at night, you try everything to get her to feel better… including elevating one end of her crib.  We did this using diapers, as you can see from the picture above.  Not going to win any design awards but– you may be noticing the theme here– it gets the job done. 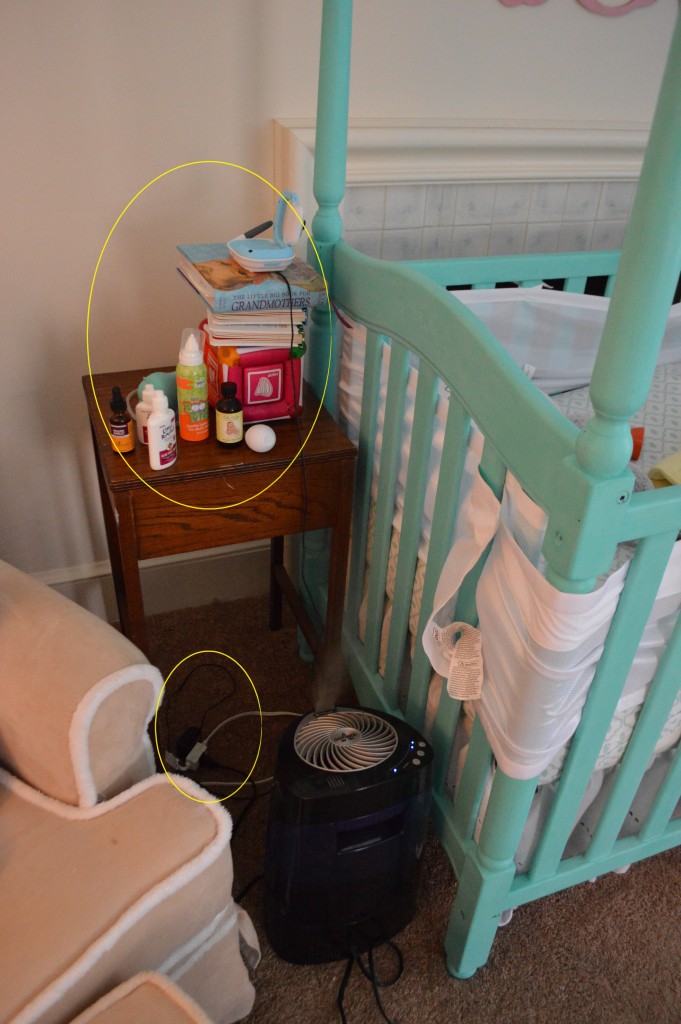 You never see extension cords in pictures of nurseries, but sometimes they’re a necessity!  (Like when you need a humidifier next to the crib.)  I also wanted to highlight the stack of books and toys needed for the video monitor to be propped up– they were taken out of the bookshelf, where they were at one time neatly stored away, and now they’re being put to use in a different way than intended.  Is it forever, you might wonder?  I don’t know but it is fine for now! 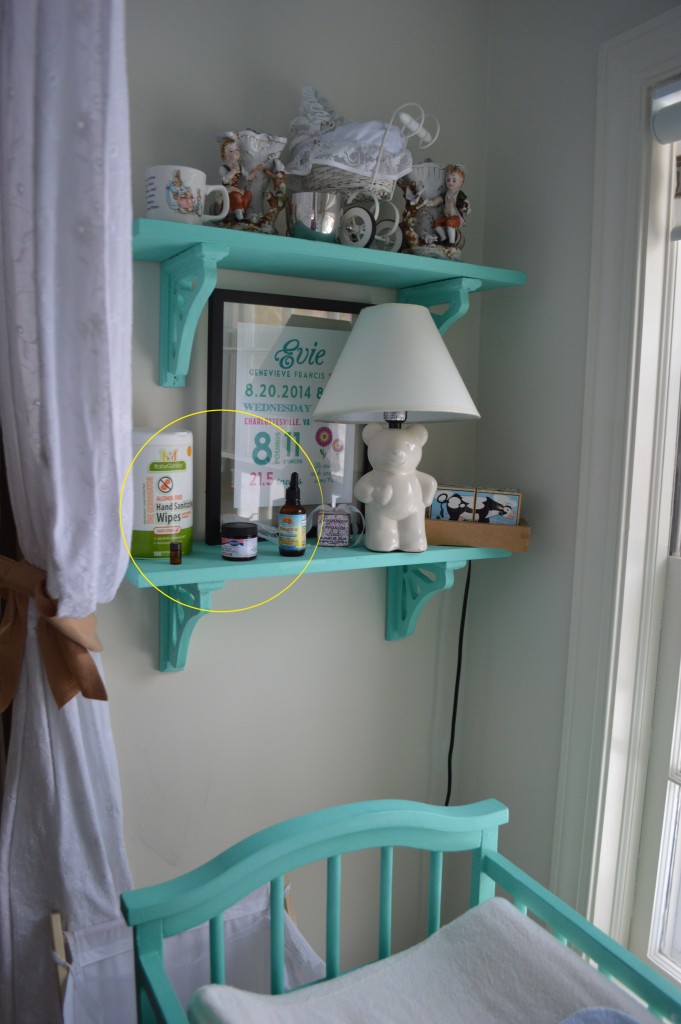 Above, exhibit E, and below, exhibit F

The shelves by the changing table that were once used for decoration only have now become functional as well.  They house every day items– Vitamin D drops, baby Vicks vapor rub, coconut oil, massage lotion, diaper wipes… stuff that I need quick access to while Evie’s laying on the changing table and don’t want to dig around.  Sure, it’s not as nice to look at as when there were only beautiful toys and girly things on display, but it makes my life a lot easier having it all handy! 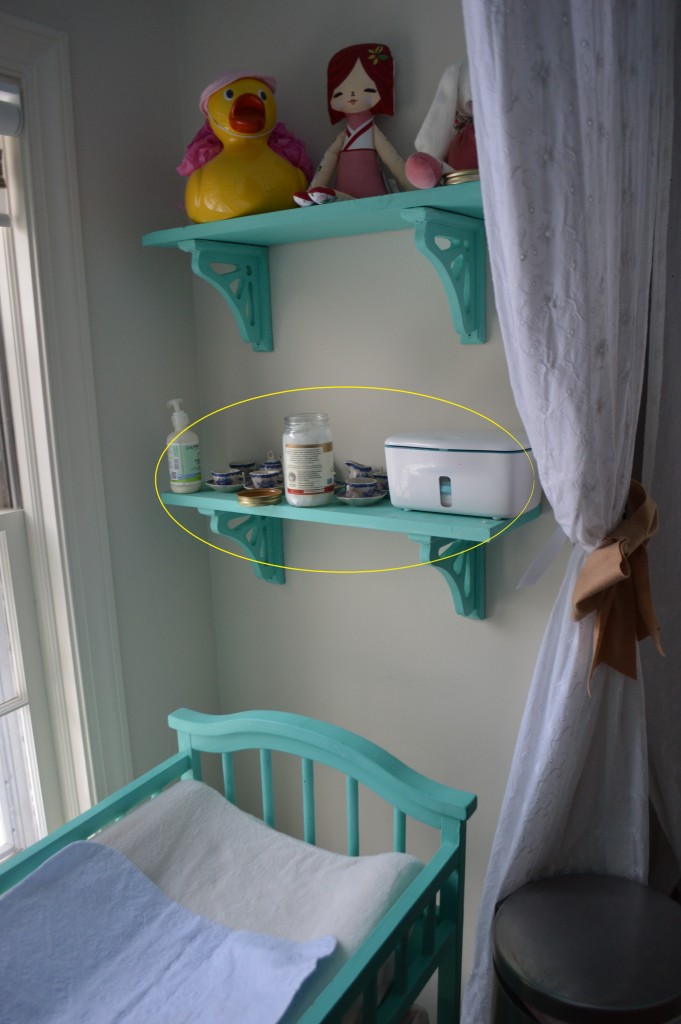 So there you have it, folks– a real-life six month old’s nursery!  I know it could look better and I could take time to put everything away and have it always aesthetically pleasing, but the few minutes each day that takes could also be used for cuddles or The Itsy Bitsy Spider.  Something tells me Evie doesn’t mind, anyway.  🙂

4 thoughts on “What A Nursery Looks Like After 6 Months”