Skip to content
The Allure of the Boxwood Bush
When we first bought our farmhouse, we didn’t even know there were big old boxwoods on the property because unfortunately it was a bit overgrown. After months of clearing out trees, bushes, and vines, we discovered we are the proud owners of dozens of GORGEOUS big old boxwoods! In this blog I will tell you our 10 tips to care for boxwoods. 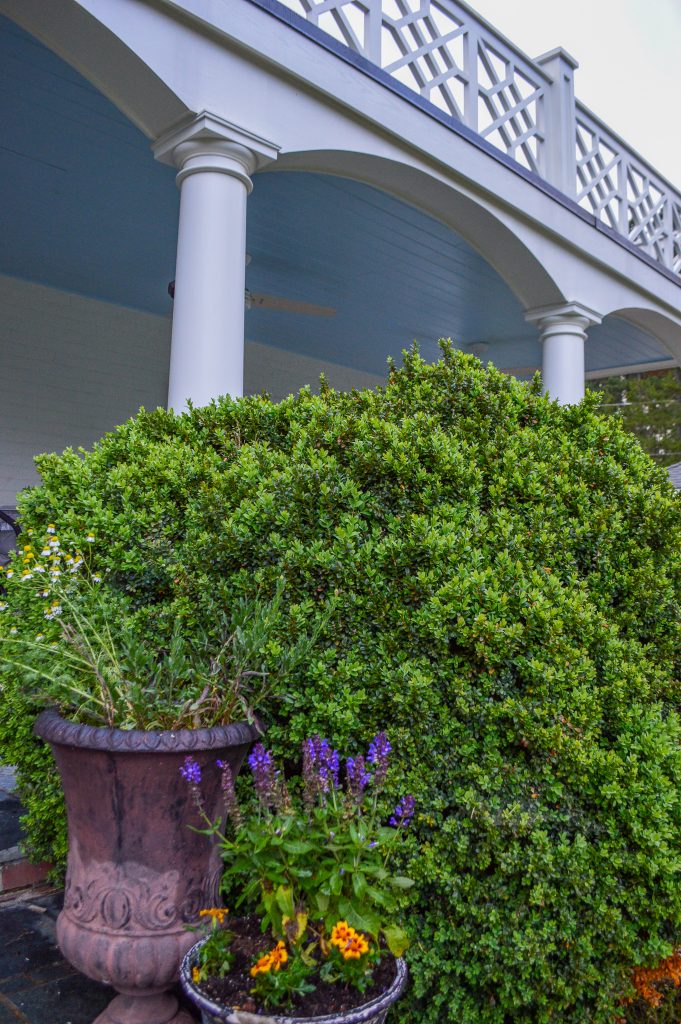 Huge bonus for me, even though I didn’t really know how to take care of them. Boxwoods remind me instantly of my grandparents’ farmhouse in the Shenandoah Valley where I spent a significant portion of my childhood. My grandparents loved their boxwoods. My brother and I used to pretend we had little homes within the rows of 15′ tall boxwoods and would carve out make-believe rooms and hallways running between them. 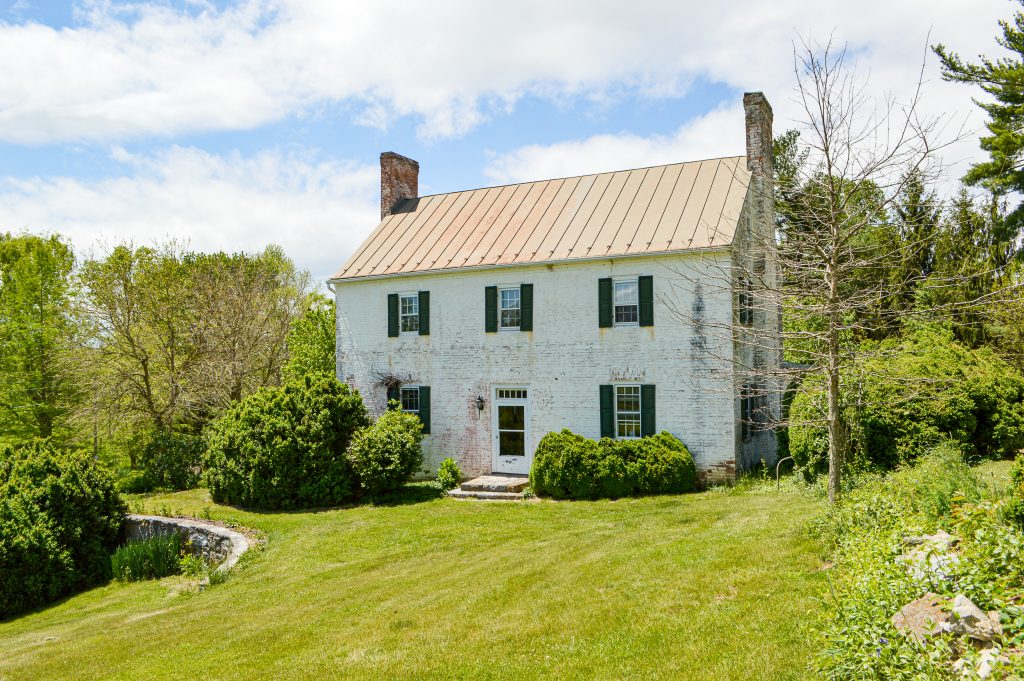 I always admire beautiful boxwoods whenever I see them. (And I’m clearly not not the only one– boxwoods are expensive, perhaps the most expensive?– bushes I’ve seen for sale at all the local nurseries!) Boxwoods are evergreen and their pretty little leaves are a calming shade of green. They are not prickly like holly. They are resilient once they’re established. My favorite part: deer avoid them! 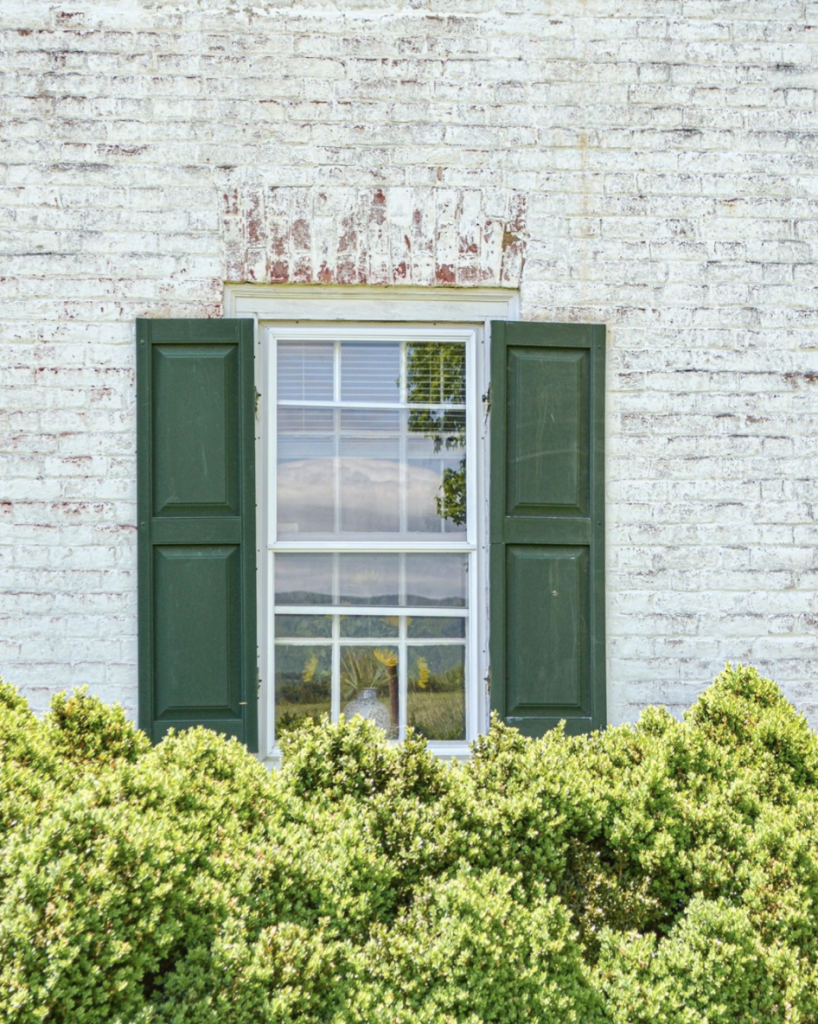 I should note deer avoid them because they are toxic. They are also toxic to cats and dogs, apparently. (We’ve had a lot of cats and dogs around over the years and not one has taken it upon themselves to try and eat a boxwood.) I’ve heard they’re also toxic to horses but I don’t know if that’s true.

10 tips to care for Boxwoods

Having spent a few years with our boxwoods now, some of which were in poor health and needing to be nursed back, I’ve gotten to learn a few things. I’ve planted around 20 boxwoods throughout our property (some I’ve purchased, but most I’ve propagated from our older boxwoods) and have learned the hard way why some make it and others don’t.
As an Amazon Associate I earn from qualifying purchases.

Boxwoods are susceptible to a fungus that can spread through the soil, through gardening tools, or even just through touch. Apparently birds, insects, animals, wind, rain, and runoff of irrigation water are also capable of moving the spores between properties. It is devastating to see some old Virginia farmhouses that were once proudly surrounded by wise old boxwoods suddenly stripped bare because the boxwoods got blight. 🙁

#1 tip to care for boxwoods

Before I do any pruning, I make sure to spray any tools I’ll use with some kind of disinfectant. (Here’s the spray bottle I use, and I just fill it with rubbing alcohol.) You can use alcohol, bleach, Lysol or some other disinfecting solution before (and after!) working with boxwoods to lessen the possibility of spreading disease.

One of the tips I learned is that timing matters for boxwoods. Don’t plant, fertilize, or prune them at the wrong time. (They’re not unique in this way; I simply learned the hard way not to ask too much of a boxwood because I have killed one and made another pretty unhealthy by not following the best time of year to treat it. Don’t make my mistake!)

When is the best time to plant a boxwood?

#2 tip to care for boxwoods

I’ve been told the spring is the best time to plant a boxwood, but I’ve had luck planting in early fall (like September) too. I think the theory is that you just don’t want extreme temperatures (hot or cold) to stunt the root development.

When should boxwoods be cut back?

#3 tip to care for boxwoods

The best time to prune or trim your boxwoods is definitely in the spring. Here in Charlottesville, the ideal time is late March through April. I’ve pruned some boxwood branches the first week of March and then we got one of those annoyingly late winter storms and I think it really damaged that boxwood. (Note: English boxwoods tend to grow especially dense and thus are susceptible to disease, so thinning to promote air circulation is important.) You don’t ever want to drastically cut a boxwood back. Severe reductions in size should be spread over two years. I’ve heard you never want to cut more than 1/4 of a boxwood out at once, even if a lot of it is damaged.
(When cutting boxwoods, by the way, you don’t want to shear them. They look healthier when hand pruned. There is definitely an art to pruning them.)

How to thin your boxwood

#4 tip to care for boxwoods

In the fall, it’s a good time to thin them out a bit. I just use my hand pruners and go for a few branches (maybe 6-10″ long?) per bush and kind of pick them randomly. This will leave pockets for air and sunlight to get through. Using hand pruners makes a cleaner cut and lessens the possibilities of disease introduction. I’ve found that after I cut the branches, if I shake the bush gently, some other dead leaves will fall off. Be sure to pick up those dead leaves to protect against disease.

When should boxwoods be fertilized?

#5 tip to care for boxwoods

I learned this via an online search years ago and I am including the exact verbiage here:

Boxwoods benefit most from some fertilizing in spring to promote green growth or in late fall to promote root growth over winter. And know when not to add fertilizer: It’s never a good idea to fertilize boxwoods in the heat of summer, late in summer, or in winter. Fertilizing in late summer, before cool fall temperatures, can harm the plant by forcing new leaf growth just before winter cold and dormancy.

What fertilizer works best for boxwoods?

#6 tip to care for boxwoods

My boxwoods seem to love cotton seed meal fertilizer. I get the big bags of these things. The trick is to sprinkle it around the base of the boxwood then sprinkle compost on top. Then you cover the compost with mulch. Don’t let the granules come in contact with the actual roots or leaves. You can test your soil and see what the pH level is. (I buy my kits on amazon, super easy.)

How do you mulch boxwoods?

#7 tip to care for boxwoods

Boxwoods’ roots tend to like cool soil conditions, so it is good to spread 1-2″ inch layer of chopped leaves or wood chips around the base. Keep it about 6 inches from the stem of the bush to avoid stem rot. This mulch will keep the soil moist and should help with weeding. (Do not mulch with whole leaves because they mat together, preventing water from soaking into the soil.)

Like all things in the garden, the initial spot a boxwood is planted makes a difference.  The best site includes partial sun year round and some protection from harsh winter winds. If you don’t have partial sun year round, they’ll likely do fine in a full sun environment. I’ve planted a few in full sun and they are happy!

Sometimes, the bottom branches of boxwoods self-root and dig themselves into the ground. This is both an exciting and bad thing. It’s exciting for me because it means I can potentially get a whole new baby boxwood out of that branch! But it’s a sign the levels aren’t right with the soil. Deep mulch can cause boxwoods to root out into the mulch and that’s not good. 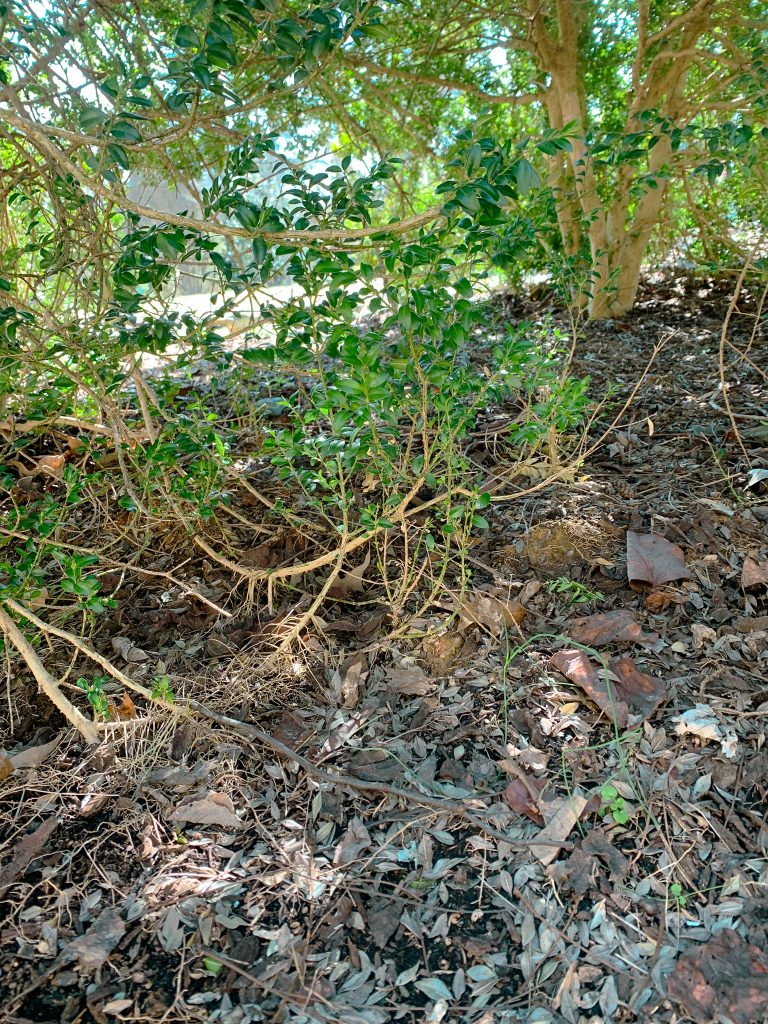 My grandfather used to place bricks on the bottom branches of his healthy boxwoods. The branches would make contact with the soil below and immediately start rooting themselves. Then he would take off the brick, dig up the branch (that now has roots), and plant that branch in fertile soil elsewhere.
The bad part of this, though, is if you don’t cut the branch, it can really hurt the boxwood as it leans into those new roots. It’s important to stay on top of cutting those bottom branches if they’ve rooted.

How do you cut the bottom branches?

#8 tip to care for boxwoods

I’ve found it’s easiest to first cut the branch where it meets the ground and has taken root, THEN get a little hand saw and saw off the rest of the branch as close as possible to the trunk.
There are 2 tricks with this: 1 is doing so at an angle where rainwater won’t pool on the branch stub. (You want the rainwater to move straight down and not sit on the wood at all.) 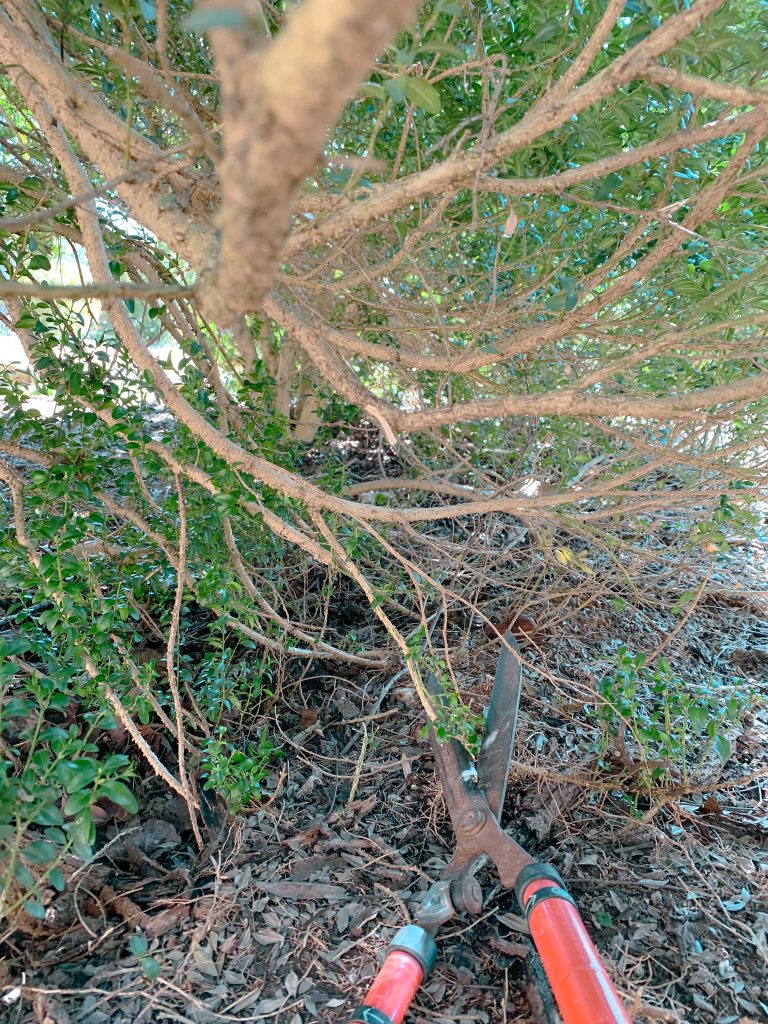 Below is the same boxwood but now without any branches grounding/ rooting themselves. SO. MUCH. HEALTHIER. 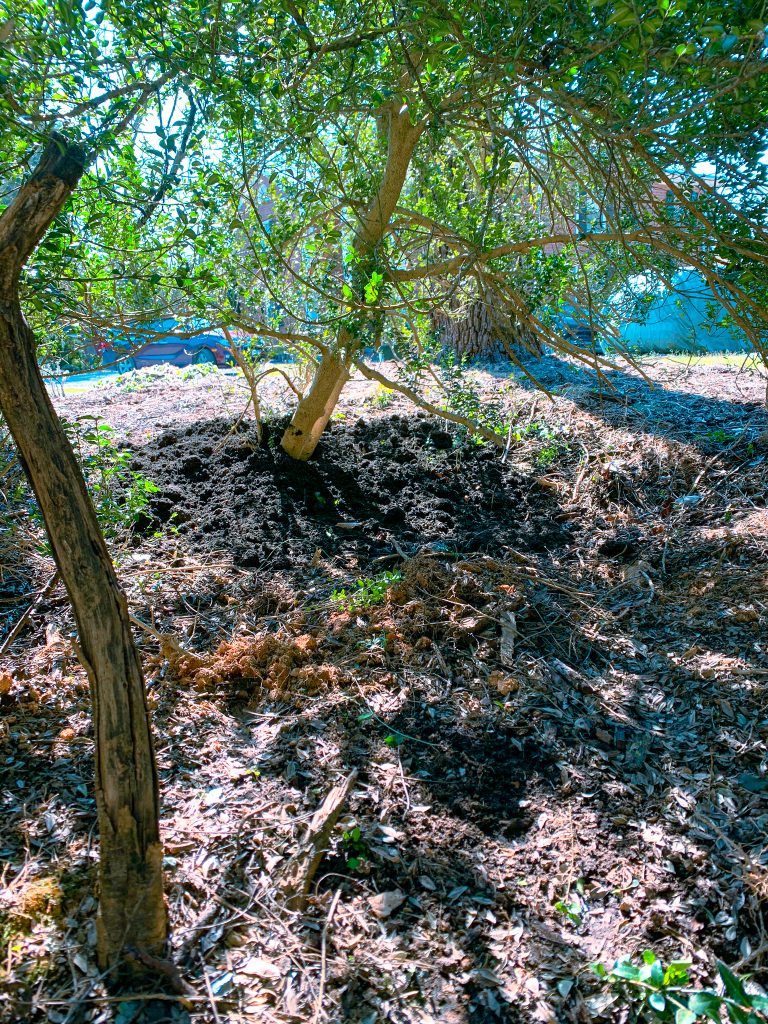 The second trick when cutting the bottom boxwood branches is to lift the branch up when you’re cutting, not push it down. You can accidentally snap the boxwood branch if you’re pushing it down and it could splinter into the trunk. Don’t do that. 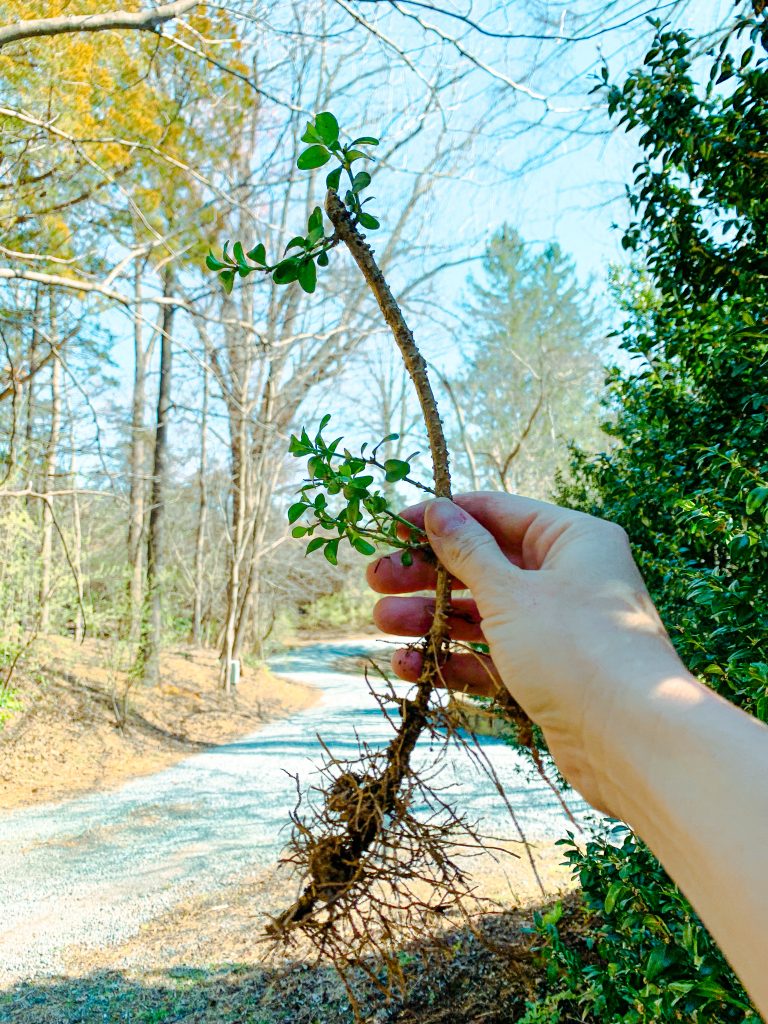 Anyway, once you’ve cut the branch out of the soil, you can plant it wherever you want! Last spring I had dozens of baby boxwoods in my garden where I made sure they had the pH and fertilizer they needed. 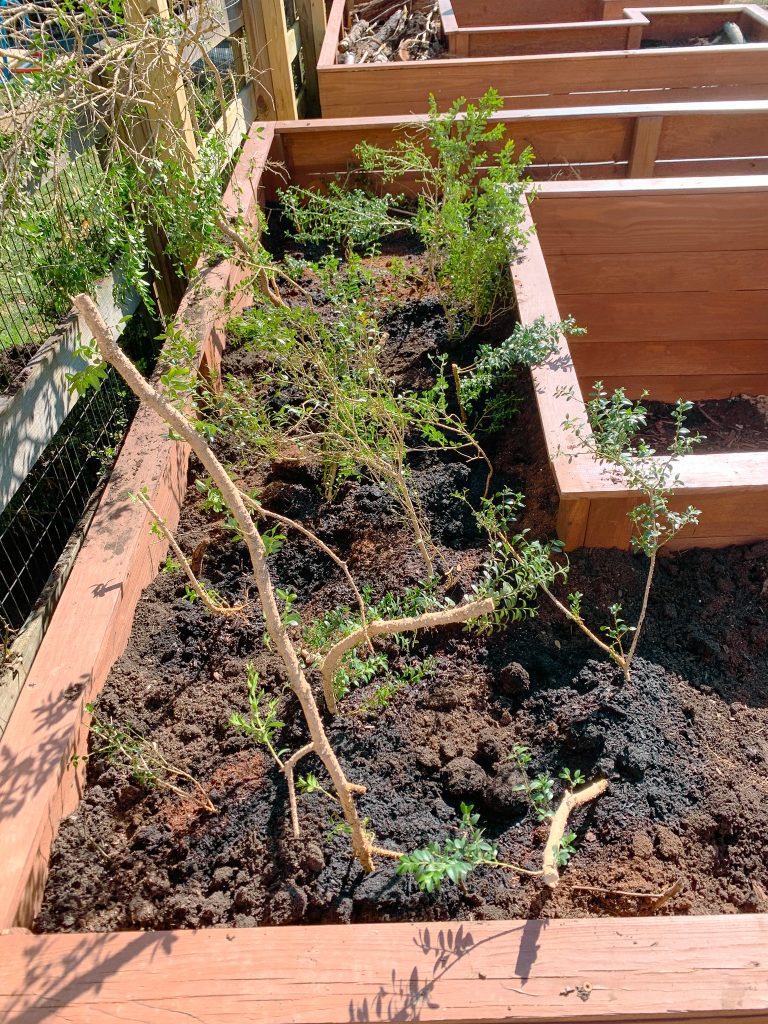 What to know when planting a boxwood.

#9 tip to care for boxwoods

They should be planted slightly higher than you think– the roots are shallow– I put them in the ground just at the level of the highest root offshoot. It’s critical that the soil is well drained so sometimes you need to add a little gravel in this thick Virginia clay. I use a combination of some kind of organic miracle gro type product for shrubs, compost, gravel, and the clay that’s already making up the soil.

Why are the leaves on my boxwood turning yellow?

#10 tip to care for boxwoods

Apparently nitrogen deficiency is the culprit when lower leaves start yellowing, especially older leaves inside the plant. You can buy special nitrogen fertilizers if that happens.

How do you prevent snow from hurting your boxwood?

I made the horrible mistake our first winter here of going outside after a snowstorm and grabbing a broom to knock the snow off of the branches. Somehow it miraculously worked and saved the boxwood branches that were bending over from the weight of the snow. I got reeeeeally lucky.

PSEUDO-TIP: What we should have done, and what I’ve seen around our neck of the woods, is folks loosely tie a string around the branches and even cover each boxwood in a burlap sack prior to a big storm coming. That prevents the weight of the snow (or ice) from bending the branches over and killing them. It’s a big pain to do though when you have a lot of tall boxwoods! So…. do as I say, not as I do, because I’ve never done this but I know it’s the right thing!

Boxwoods are beautiful to behold and fun for kids to play in. My kids now have a little “house” within one of our biggest boxwoods and it makes me happy they’ve organically recreated the game my brother and I used to play decades ago. With any luck, our boxwoods will be around for years and years to come for the next generation of “houses” too! 🙂

7 thoughts on “10 Best Tips for Taking Care of Boxwoods”